Even though dinosaurs date back to prehistoric times, a dinosaur theme park is where you can catch a glimpse of these enormo... 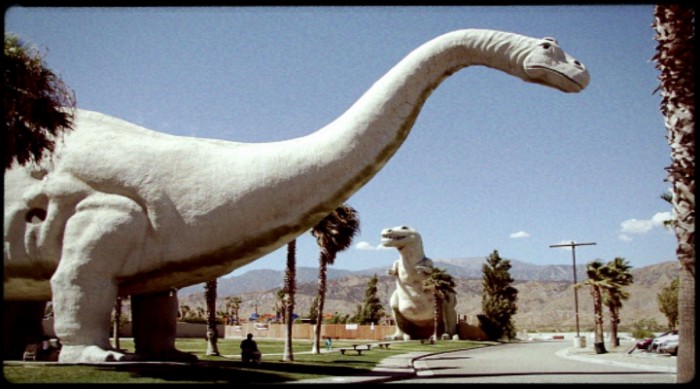 Even though dinosaurs date back to prehistoric times, a dinosaur theme park is where you can catch a glimpse of these enormous terrifying creatures in today’s modern times. And if you’ve made your mind to step into that world, there’s none better than Cabazon Dinosaurs! Located toward the west of Palm Springs, travelers can spot the dinosaurs from the Interstate-10 Expressway as they pass by.

Created by a theme park artist and sand sculptor named Claude K. Bell, it’s been the site of a creationist museum and gift shop since the mid-1990s. The dinosaurs garnered much fame and featured in music videos, commercials, films, feature films, video game, and a novel. But the most memorable one was in the 1985 adventure comedy film Pee Wee's Big Adventure.

How, When & Why Did the Cabazon Dinosaurs Came Into Being? 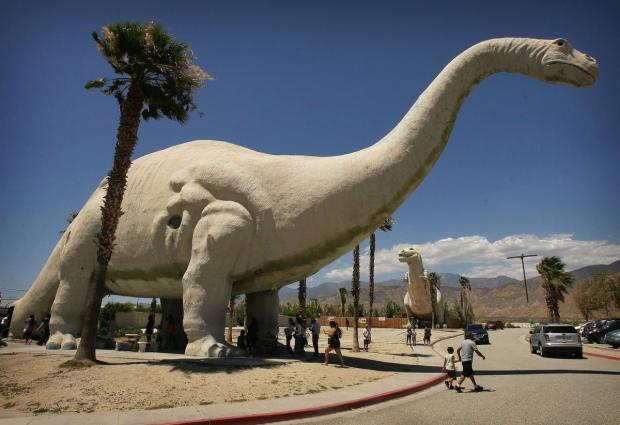 Claude Bell began the construction of the dinosaurs in the 1960s to attract customers to his restaurant Wheel Inn which opened in 1958 and closed in 2013. Built in a span of 11 years, Dinny was the first dinosaur to be created which got completed by 1975. Made out of extra material retained from the construction of I-10, Dinny was formed as a biomorphic building. In 1970, Bell said that,

"Dinny was the first dinosaur in history, so far as I know, to be used as a building." 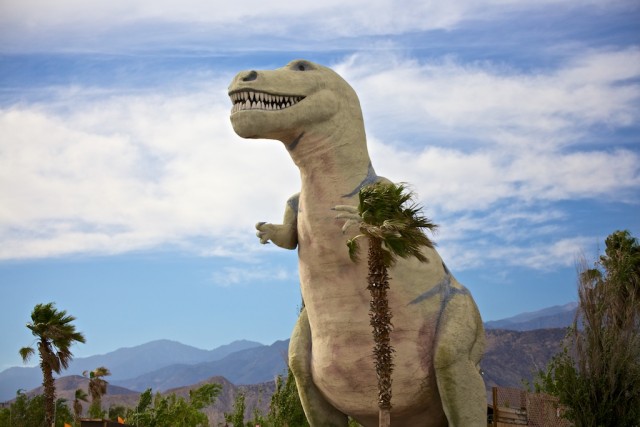 The creation of the second dinosaur Mr. Rex started in 1981 got completed in 1986. A second dinosaur, Mr. Rex, was constructed near Dinny in 1981. A big slide was installed in Rex's tail initially which was later filled with concrete making it unusable. A prehistoric garden and a woolly mammoth sculpture were drafted, but they never reached completion due to Bell's death in 1988.

The Creationist Museum & Gift Shop Inside the Dinny’s Abdomen 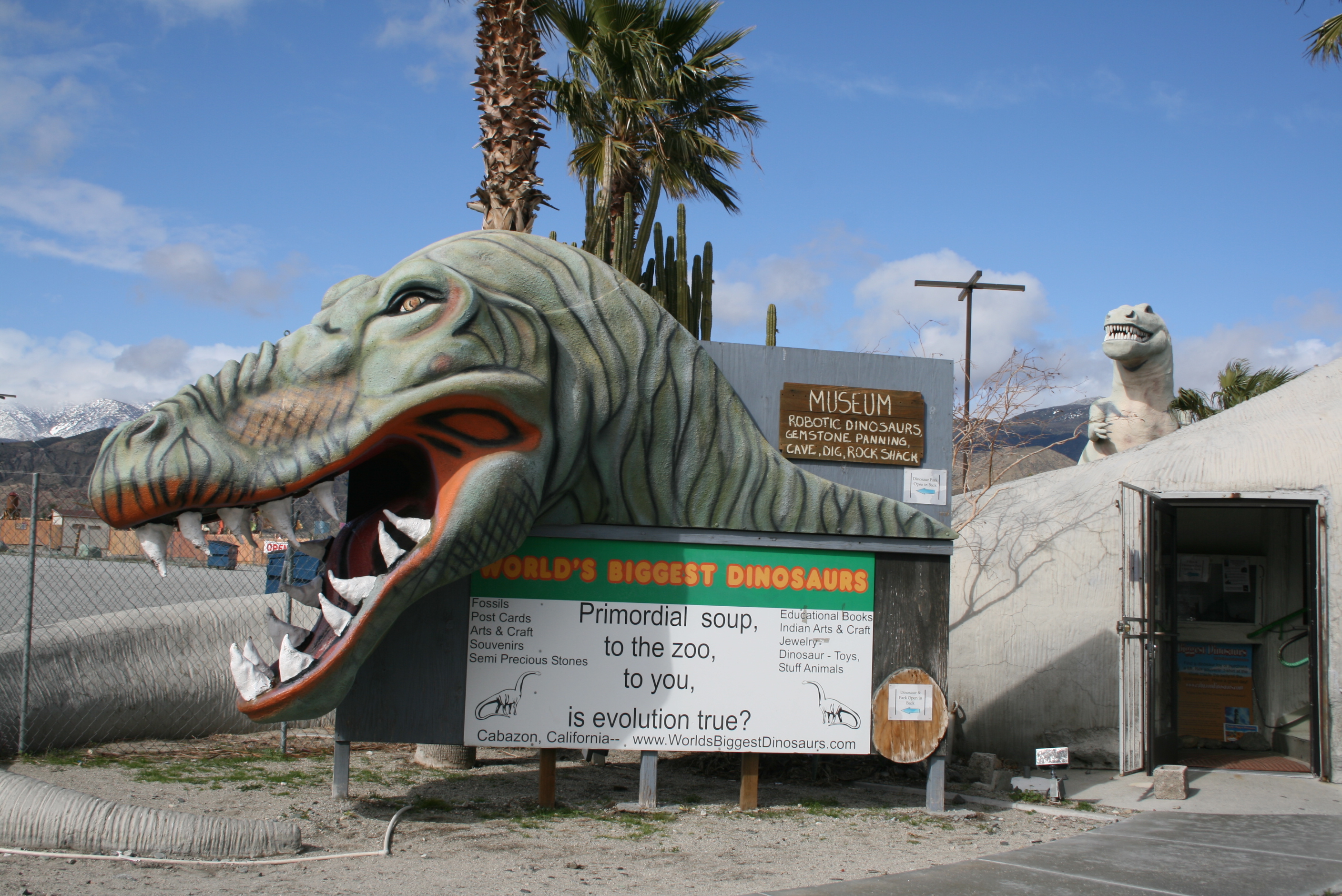 Post Bell’s death, his family sold the property in the mid-1990s. The new owners ‘Cabazon Family Partnership & MKA Cabazon Partnership’ got the approval for the expansion of the Cabazon dinosaur site in 1996. MKA partner Gary Kanter declared that their original vision is to transform the area into a children's science and museum exhibit.

Inside Dinny’s abdomen, there’s a gift store and creationist museum promoting intelligent design theory. Some toy dinosaurs in the gift shop are labeled as,

"Don't swallow it! The fossil record does not support evolution." 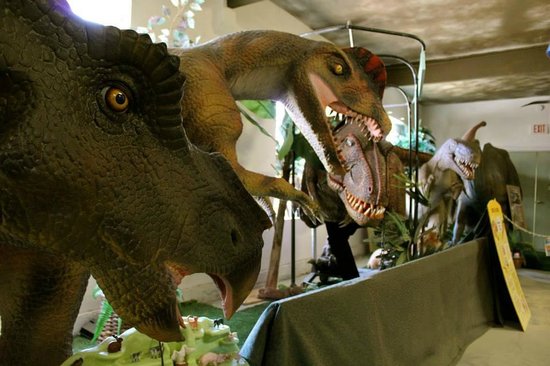 Some historic displays illustrate earth origin, human evolution theory, and the coexistence of humans and dinosaurs. The current ownership contends that around 6,000 years ago which was the same day as Adam and Eve, the dinosaurs came to Earth. This is in absolute contrast to Bell’s frescoes and sculptures including representations of Cro-Magnon man (labeled "Cro-Magnon Man 30,000 [years ago]") and Java Man (labeled "Java Man 400,000").

This roadside attraction also features a sandpit where visitors can experience a "dino dig", an open-air museum that consists of robotic dinosaurs as well as a gemstone panning area. 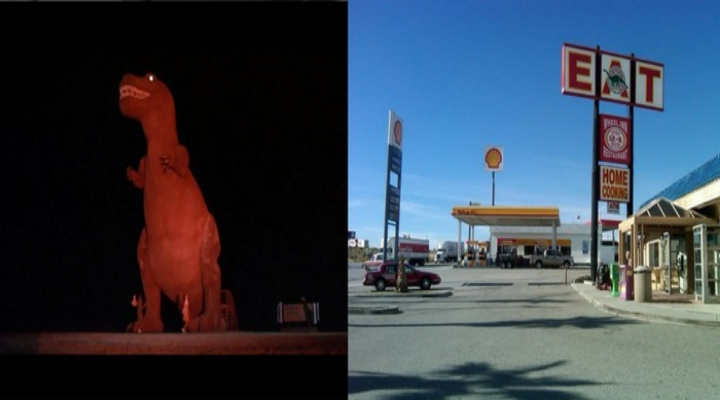 Having filmed many scenes around the dinosaurs, the director Tim Burton of “Pee-wee’s Big Adventure" said during the film's DVD commentary that several people believed that the dinosaurs were created for the film not realizing that they were actually part of a real roadside attraction. The infamous "Large Marge" scene was shot at the nearby restaurant Wheel Inn (now in ruins).