“Let these be guidestones to an Age of Reason.”

“Let these be guidestones to an Age of Reason.”

This is a tablet engraved on the ‘Georgia Guidestones’ which contains a set of ten guidelines. Constructed in 1980, it is a monument with inscriptions that are allegedly aimed at restoring the planet and society post-apocalypse. It is a 19 feet 3 inches (5.87 m) tall monument made out of six granite slabs with an overall weight of 237,746 pounds (or 107,840 kg).

The monument is situated at the highest point in Elbert County, Georgia in the United States. These Guidestones have been subject to speculations and conspiracy theories. That’s because the designer and meaning of Guidestones remain unknown. Hence they happen to be one of the greatest and unexplained mysteries of the United States.

Also known as ‘American Stonehenge’, the structure has one slab in the center with the other four arranged around it. There’s an astronomically aligned capstone on top of five slabs. Another stone tablet, placed on the ground at a short distance toward the west of the structure, contains some notes on its history and purpose.

Back in June 1979, a man using the self-professed pseudonym Robert C. Christian reached out to the Elberton Granite Finishing company on behalf of "a small group of loyal Americans" signed up a contract for the structure. He expounded that the stones would act as compass, calendar, and clock, possessing the capability of sustaining any catastrophe.

Elberton Granite company’s Joe Fendley thought him to be a nut and discouraged him a number of times by presenting a high-priced to him. Christian approved the quote. While arranging the payment, he stated that he was a representative of the group that had been planning the Guidestones for 20 years, and they chose to remain anonymous.

Christian supposedly bought the 5-acre land on  October 1, 1979, from farm owner Wayne Mullinex. The farm owner and his children were rendered lifetime cattle grazing rights on the monument site. On March 22, 1980, it was unveiled before an audience of 100 or 400  people. He later moved its ownership to Elbert County.

Later in 2008, the stones were vandalized with polyurethane paint and graffiti with slogans like "Death to the new world order". The Wired called it "the first serious act of vandalism in the Guidestones' history". In September 2014, an Elbert County maintenance department employee reached out FBI. (17.1) 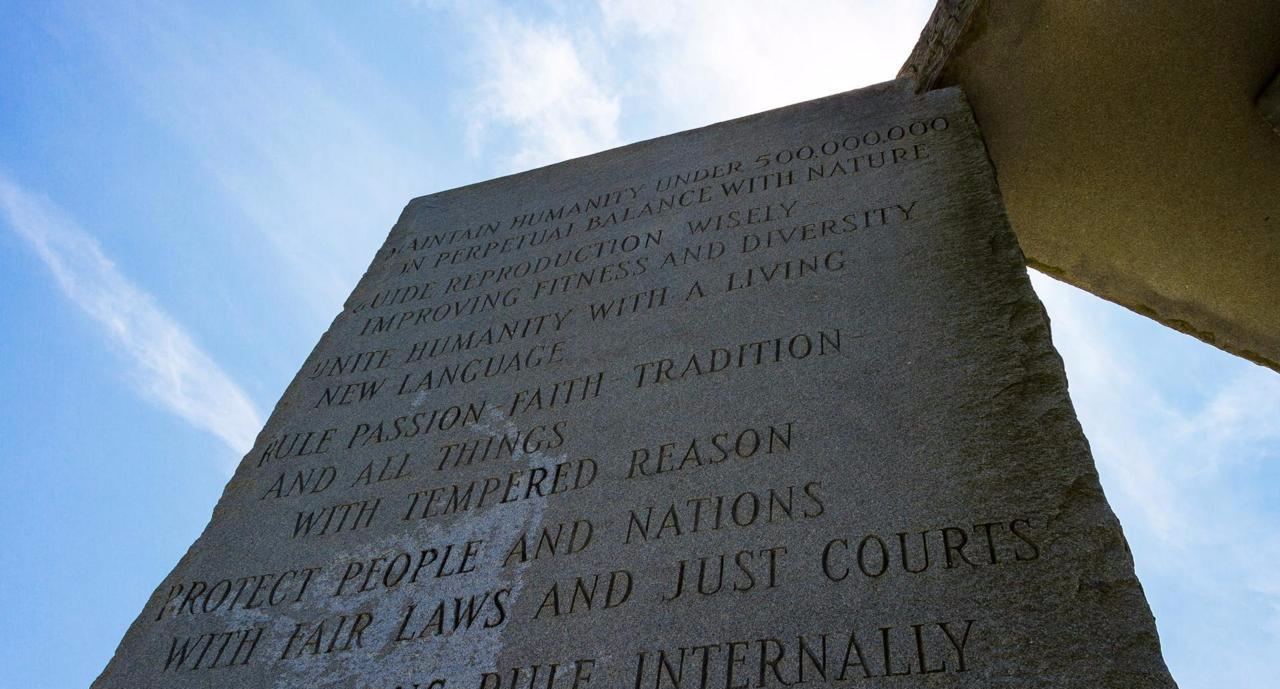 The Georgia Guidestones had a message engraved on it that comprised of ten guidelines or principles:

4. Rule passion — faith — tradition — and all things with tempered reason.

5. Protect people and nations with fair laws and just courts. 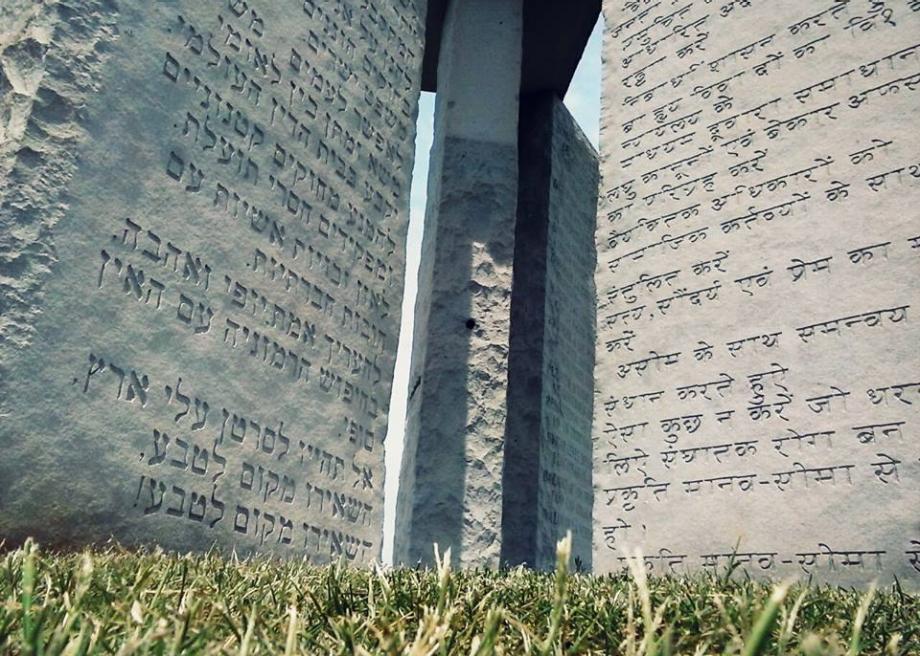 The ten guidelines are inscribed in eight modern languages that can be seen when one moves clockwise from due north: English, Spanish, Swahili, Hindi, Hebrew, Arabic, Chinese, and Russian. There’s also a shorter message inscribed at the top of the structure in 4 ancient language scripts: Babylonian, Classical Greek, Sanskrit, and Egyptian hieroglyphs.

Interpretations by Activists, Theorists & Others 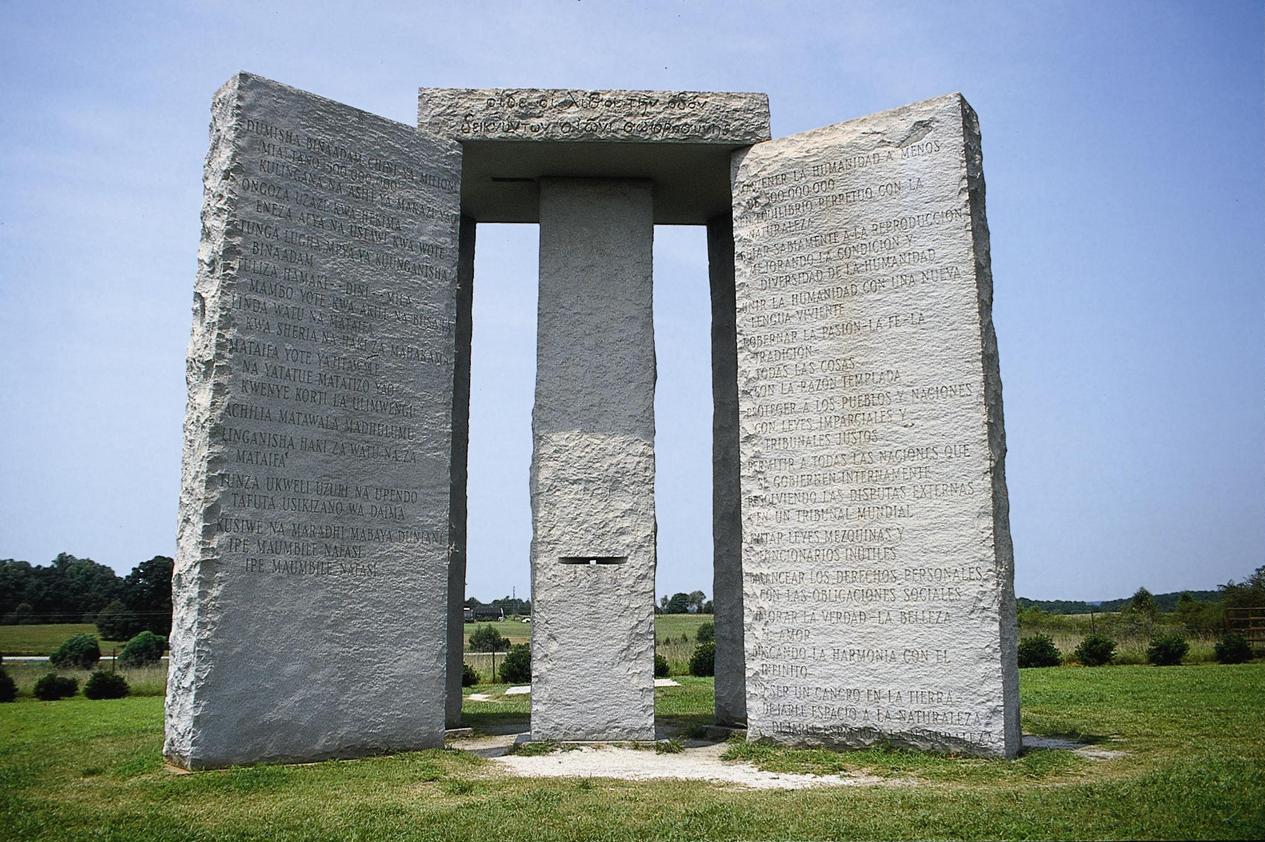 The Japanese artist and peace activist Yoko Ono and few other people have glorified the inscribed messages as "a stirring call to rational thinking”. However, the Wired magazine has described it as "Ten Commandments of the Antichrist". (17.2)

The Guidestones have aroused much interest among conspiracy theorists. An activist Mark Dice asked that the Guidestones "be smashed into a million pieces, and then the rubble used for a construction project". Further, he asserted that the Guidestones are of "a deep Satanic origin" and that R. C. Christian belongs to "a Luciferian secret society" associated with the "New World Order".