Look at These 10 Biggest Celebrity Plastic Surgery Disasters Ever 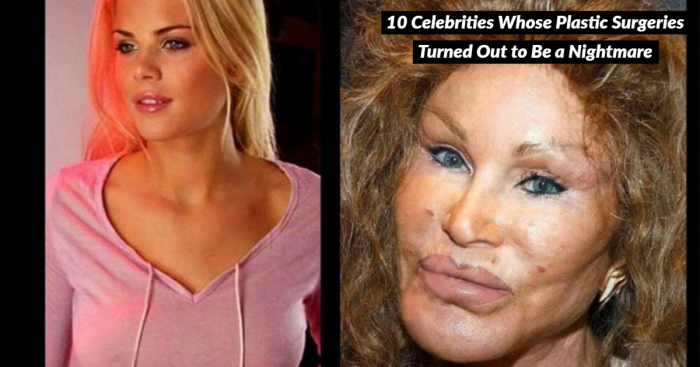 There are several celebrities out there who go for plastic surgeries. Maybe it’s a trend in the glamor world. Yes, several actresses and actors spend their fair share of time in the plastic surgeon's office to maintain a youthful appearance.

But it doesn't go well always. Truly, there are ample of examples available which are screaming loud how wrong an experiment of plastic surgery can go. Want to see a few of them? Here we have compiled some worst celebrity plastic surgery attempts which not only went wrong but became a disaster later on. Scroll down! 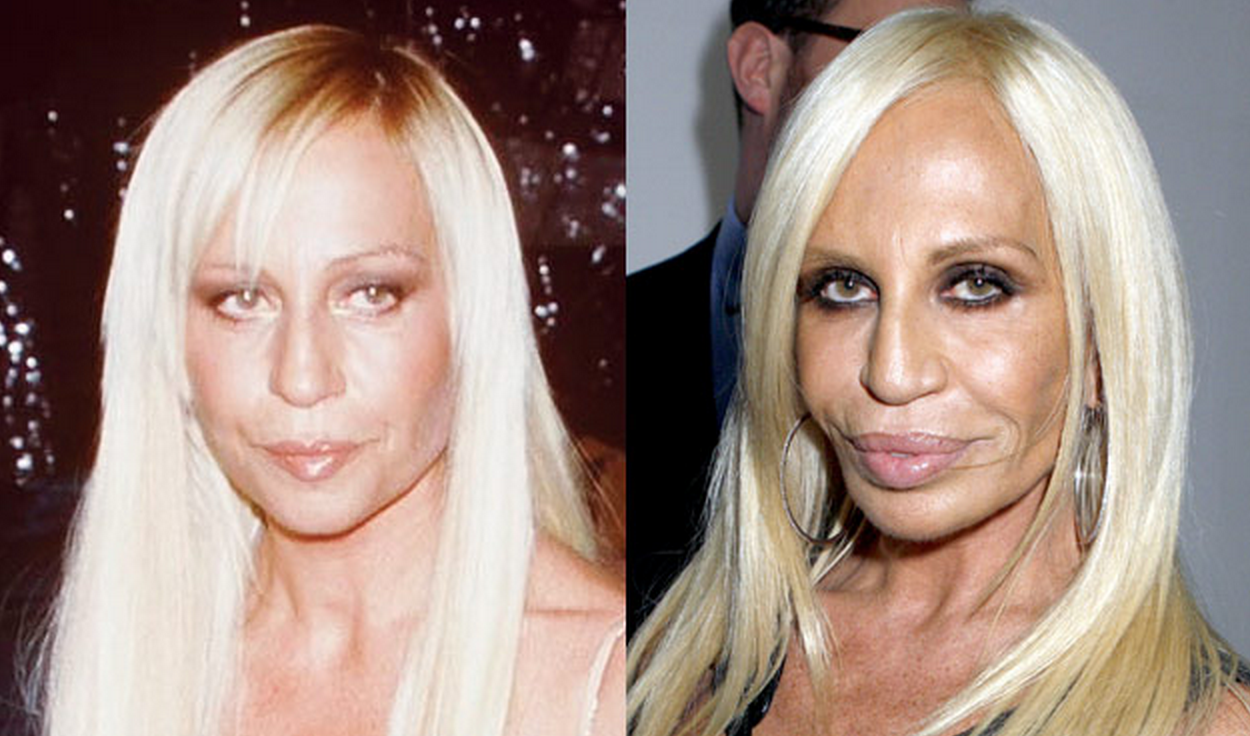 Donatella, an Italian fashion designer & the current chief creative officer of Versace, had gone through a series of surgeries following the 1990s. However, her most notable changes have been to her lips and nose, among other adjustments.

Along with that in recent years, her trademark swollen smackers have scored her a spot on nearly every list of plastic surgery. Although it is just an opinion of the public, there's no real published data that proved that even Versace is unhappy with the changes. 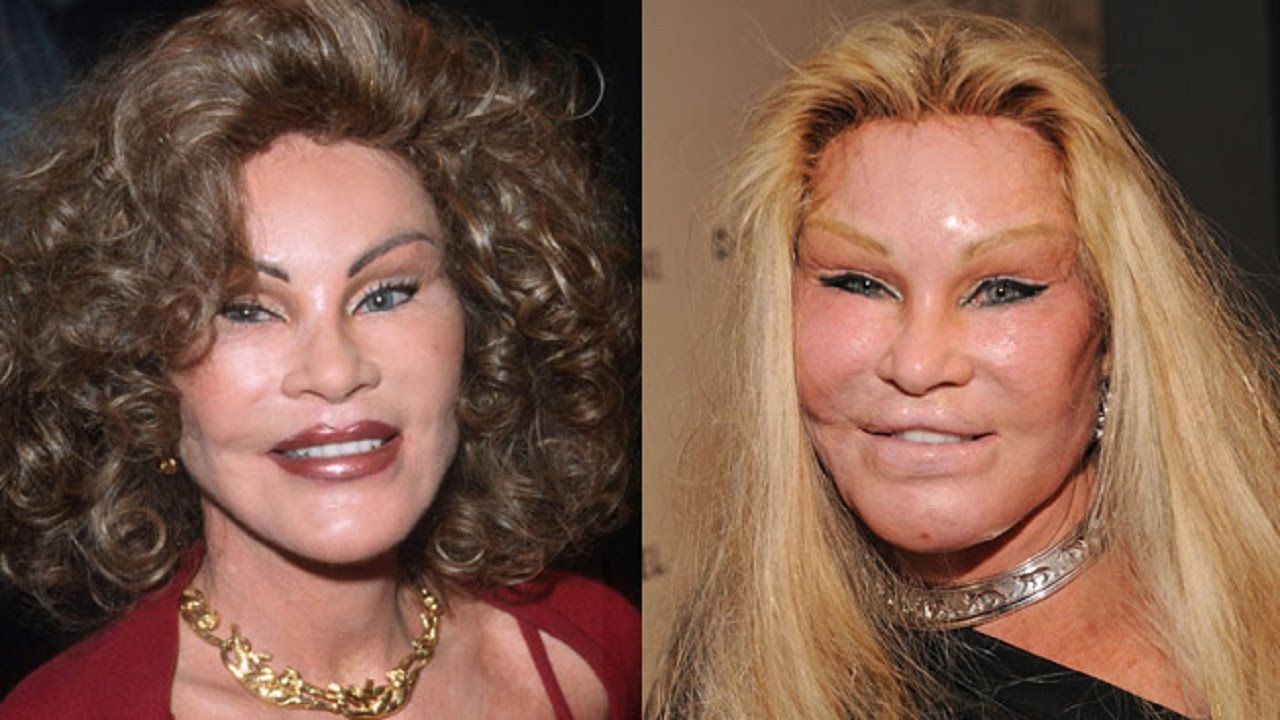 Jocelyn Wildenstein, known for her 1999 divorce from billionaire businessman Alec Wildenstein, started experimenting with plastic surgery in 1997 soon before the expiration of her 20-year marriage.

According to the reports she has spent a reported $4 million on various procedures, which include numerous facelifts and cheek implants. Her dramatic changes have earned her the nicknames like "Bride of Wildenstein" or "Cat Woman" due to her taut, feline-like features. 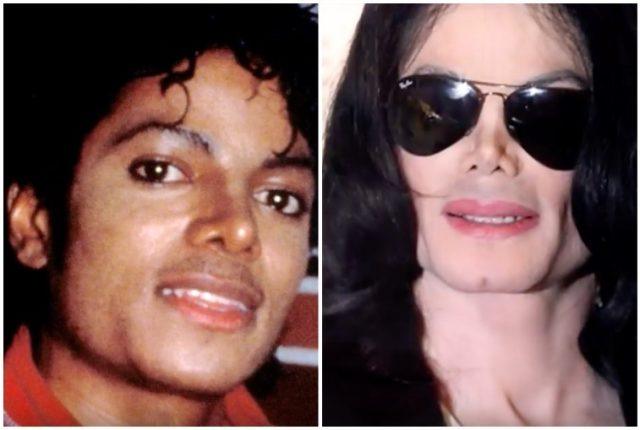 Michael Jackson, the King of Pop, also went through one of the most significant surgical transformations during his life, which is known to almost everyone I guess. Well, Jackson broke his nose after having an initial rhinoplasty in 1979; hence, he continued to get surgical enhancements and implants. Although he would stick to the statement that he hadn’t had any work done.

Still, one of the most easily-noticeable changes to Jackson’s appearance was how much his skin lightened over time. Many people believe he was using skin bleaching lotion, or it was also possible that he suffered from a skin condition called vitiligo. But it sounds like surgery more! 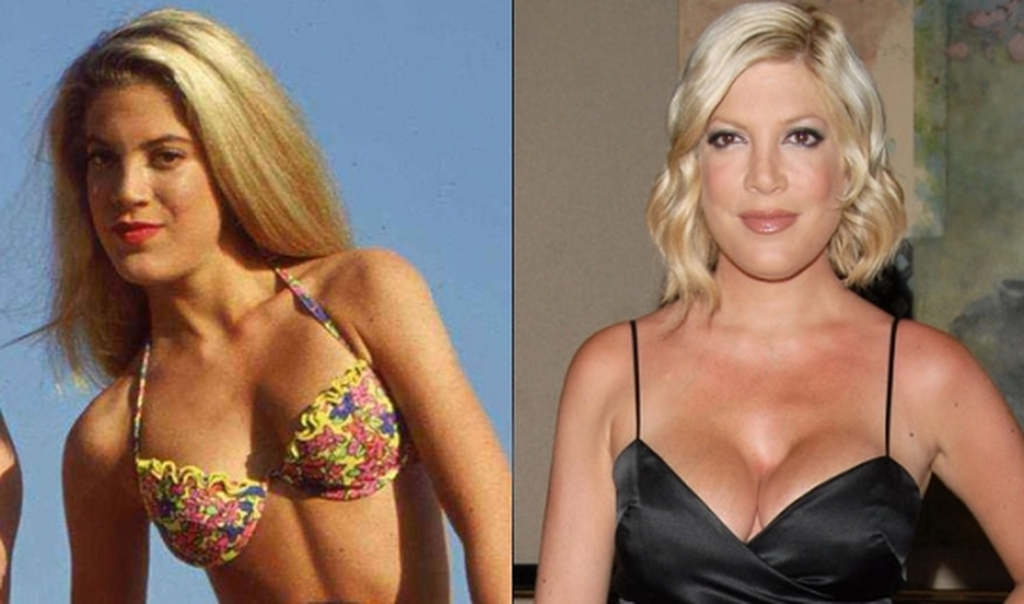 Tori Spelling, during the second season of American drama series Beverly Hills, 90210, was criticized for her deformed breasts—complete with a severe chest depression. However, she refused having experienced botched breast augmentation, but later in 2008, she confessed in an interview with Entertainment Weekly. She said,

“I wanted to come clean that I had my boobs done in my 20s because people falsely write that I've had all these things done.”

“I've had the two procedures that probably every other woman in Hollywood has had done.”

Reportedly, she also sued the doctor responsible for the same surgery. 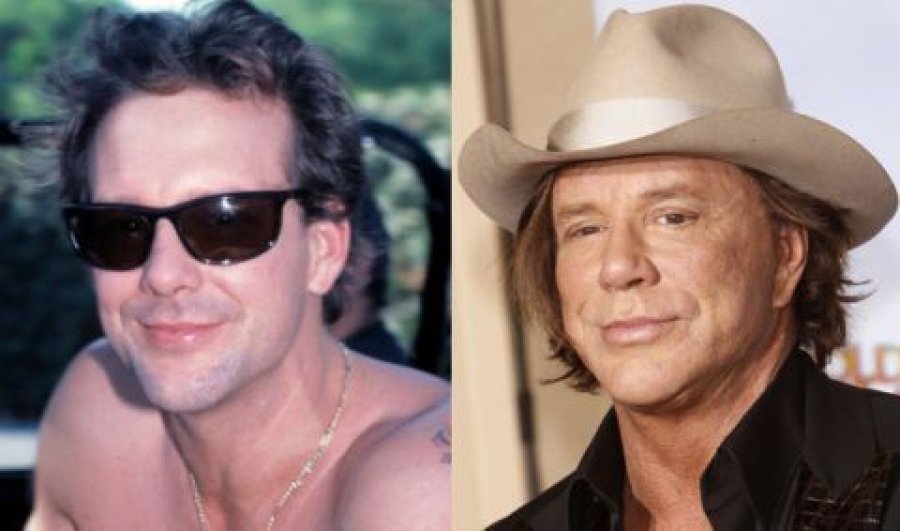 Philip Andre "Mickey" Rourke Jr., might not be so fine…anymore. Well, this American actor, screenwriter, and former boxer left all his fans in the puzzling situation after his resurgence in the movie The Wrestler due to his plastic surgery, or you can say riddled appearance.

According to Dr. Youn, a plastic surgeon in Troy, Michigan, suspected surgeries include a facelift (due to the visible scars in front of his ears), upper eye lift and also a hair transplant shown by his reappearing wispy and sideburns, continuously forward-moving hairline. 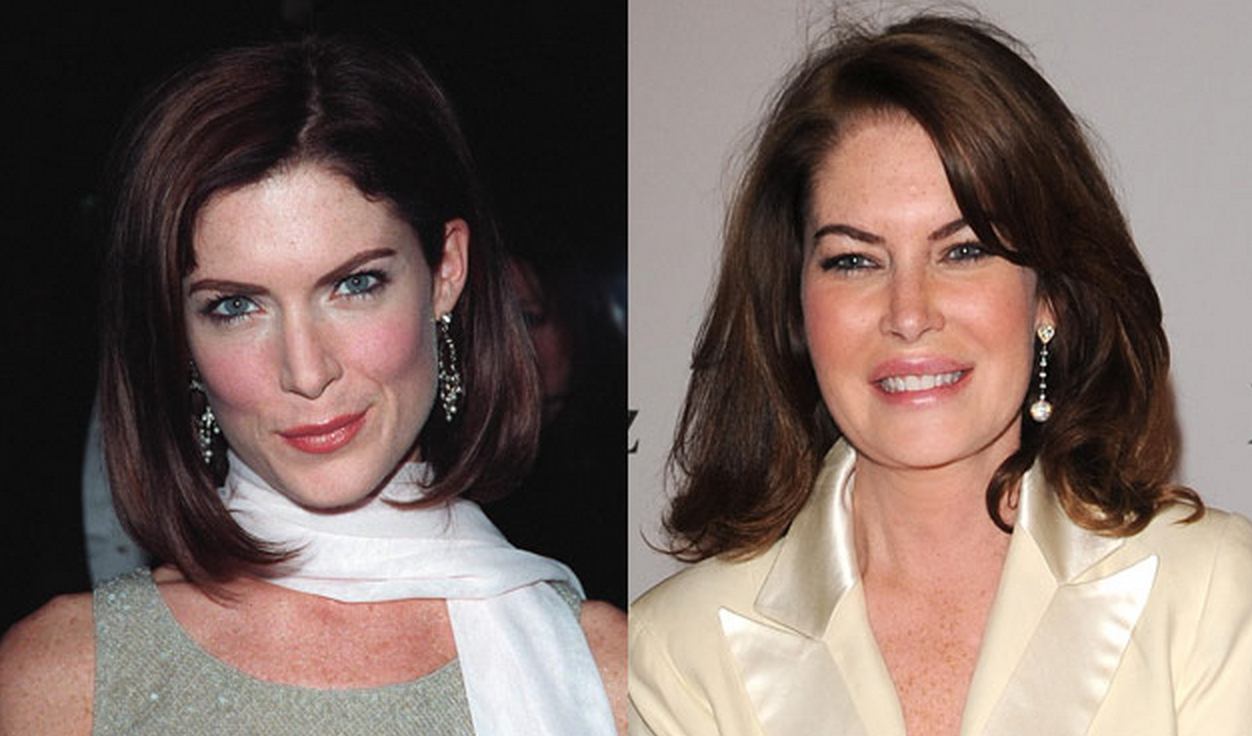 Lara Flynn Boyle is best known for her long run on The Practice from 1997 to 2003, and now the inquiring minds aren't certain what changes have been made to their favorite TV star's face.

But, as is obvious from the photos, it could be said that the beautiful 49-year-old appears as though to let loose a smile, she has to work her cheek muscles overtime—or possibly the speculated implant in her upper lip is weighing her pucker down? Well,  throughout her 2008 stint on Law & Order, the changes became all-too-apparent. 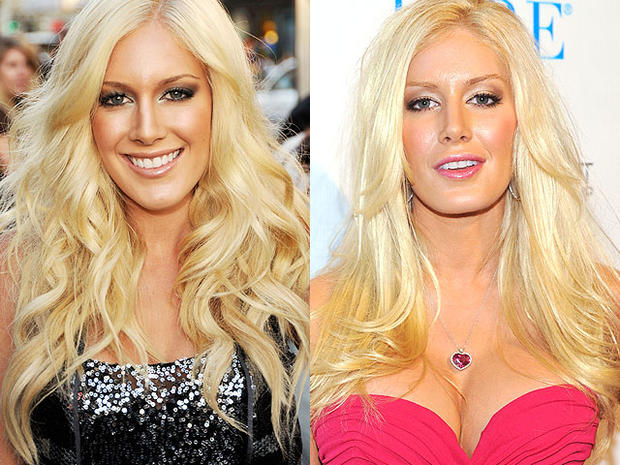 Heidi Montag, 33, was a fresh-faced 19-year-old from a small town in Colorado when she made her television debut in 2005.

But Heidi went under the knife for the first time and had a nose job after season one wrapped in August 2006. Moreover, she also performed experiments like breast augmentation to increase her size A boobs to 32C. Well, that's not it, she also began having regular collagen lip injections for skin elasticity.

In 2009, when she booked in to have ten cosmetic procedures in less than 24 hours, the reality star hit the headlines all over the world.

"She underwent 10 cosmetic surgeries in one day... and now she looks less like a person and more like a Barbie doll."

"In my opinion, none of these ten plastic surgeries have benefited her except in giving her more publicity and more reasons to do more surgery."

Heidi admitted to having a mini brow lift, a nose job revision, botox in her forehead, fat injections in her cheeks, neck liposuction,  chin reduction, ears pinned back, liposuction on the waist, second breast augmentation, buttock augmentation, and hips and inner thighs.

Much of these surgeries were estimated to have cost over £23,000 - including a second nose job, a mini brow lift, chin reduction, liposuction in her waist, neck, thighs, and hips.

"This troubled fame addict needs a shrink, not a plastic surgeon!"

Montag also admitted that the surgeries are a mistake. In an interview, she told Life & Style Weekly,

"People have fewer scars from car accidents than I have on my body." 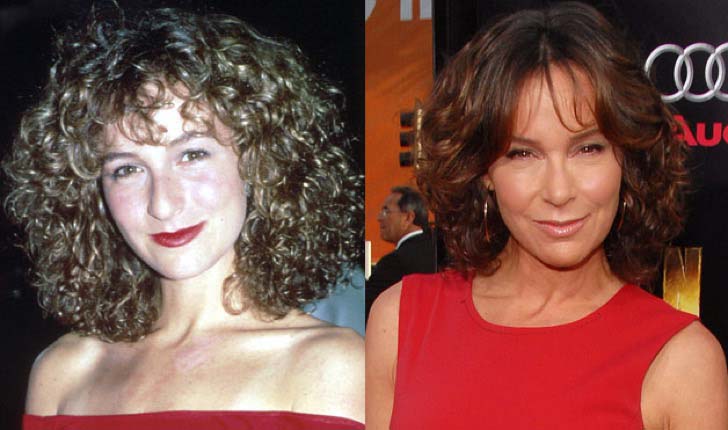 Widely known for her roles in the 1980s films Dirty Dancing and Ferris Bueller's Day Off, Jennifer Grey had gone through several surgeries. Unfortunately, the rhinoplasty that she hoped would help her during casting calls relegated her mainly to made-for-TV films though her aesthetic appearance remains pleasing.

"Jennifer Grey is a good example of how a nose job (rhinoplasty) can dramatically alter one's appearance."

"The removal of the bump (dorsal hump) on Grey's nose made her look very different from the 'Baby' character she played in 'Dirty Dancing."

It could be said that nose was one of Grey's defining features (like Julia Roberts's lips, David Letterman's gapped teeth, and Cindy Crawford's mole).

It might have gotten in the way of movie roles still her altered appearance didn't stop Grey from winning "Dancing with The Stars.”

"I personally think she looks better since it's just a tad smaller.”

"But the problem is that she doesn't look like she used to." 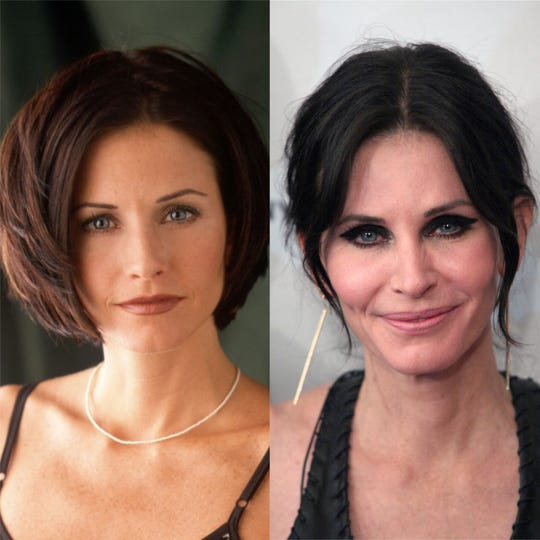 Courteney Cox, widely known for her role as Monica in "Friends," states that she dissolved all injectable fillers that she had in her face.

“I’ve had all my fillers dissolved. I’m as natural as I can be. I feel better because I look like myself.”

“I think that I now look more like the person that I was. I hope I do. Things are going to change. Everything’s going to drop. I was trying to make it not drop, but that made me look fake.”

“You need movement in your face, especially if you have thin skin as I do. Those aren’t wrinkles – they’re smile lines. I’ve had to learn to embrace movement and realize that fillers are not my friend.”

Yolanda Hadid, a Dutch-American television personality & former "Real Housewives of Beverly Hills" star, spoke about how her disease made her remove all of the implants and dissolved her fillers in an attempt to discover the root of her sickness.

"The minute I got on the show, I got sick. I've never worked on that show with a normal brain."

"I was always struggling and always trying to hold on, and keep my job."

After doctors discovered that one implant had ruptured, Hadid had her implants removed in 2015 and was leaking silicone into her chest cavity, which she says was bothering her Lyme disease symptoms.

She earlier posted a picture of herself, captioning it on Instagram as getting everything removed,

"Living in a body free of breast implants, fillers, botox, exstensions (sic) and all the [expletive] I thought I needed in order to keep up with what society conditioned me to believe what a sexy woman should look like until the toxicity of it all almost killed me."

“Your health is your wealth so please make educated decisions, research the partial information you’re given by our broken system before putting anything foreign in your body.”

Well, these examples are not all but surely great examples showing how disastrous plastic surgery can go.