Everyone has one common aspiration that they want to live their childhood again. Well, these people made it true. Yes, look at these 10+ childhood photos that were hilariously recreated. 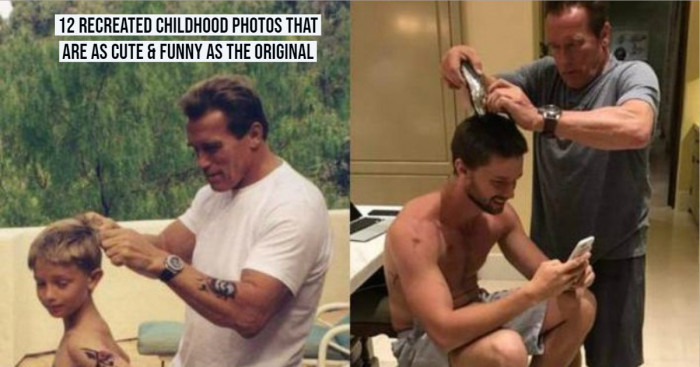 Photographs are the best way to get nostalgic and remember playful and childhood moments. Additionally, a hard copy of the photo can last for more than 100 years; family albums will keep warm memories even a century later. However, whenever we look at our family’s album, we cringe at our former selves for letting others take pictures of us during some awkward moments.

Well, embarrassing or not, glancing back at childhood photos can easily spark the desire to go back in time. So, to do that, some people do decide to recreate childhood photos. And sometimes these recreations are even better than the originals. Don’t you believe it?

So, have a look at some vivid illustrations of the fact that happy moments are worth recreating over and over again. 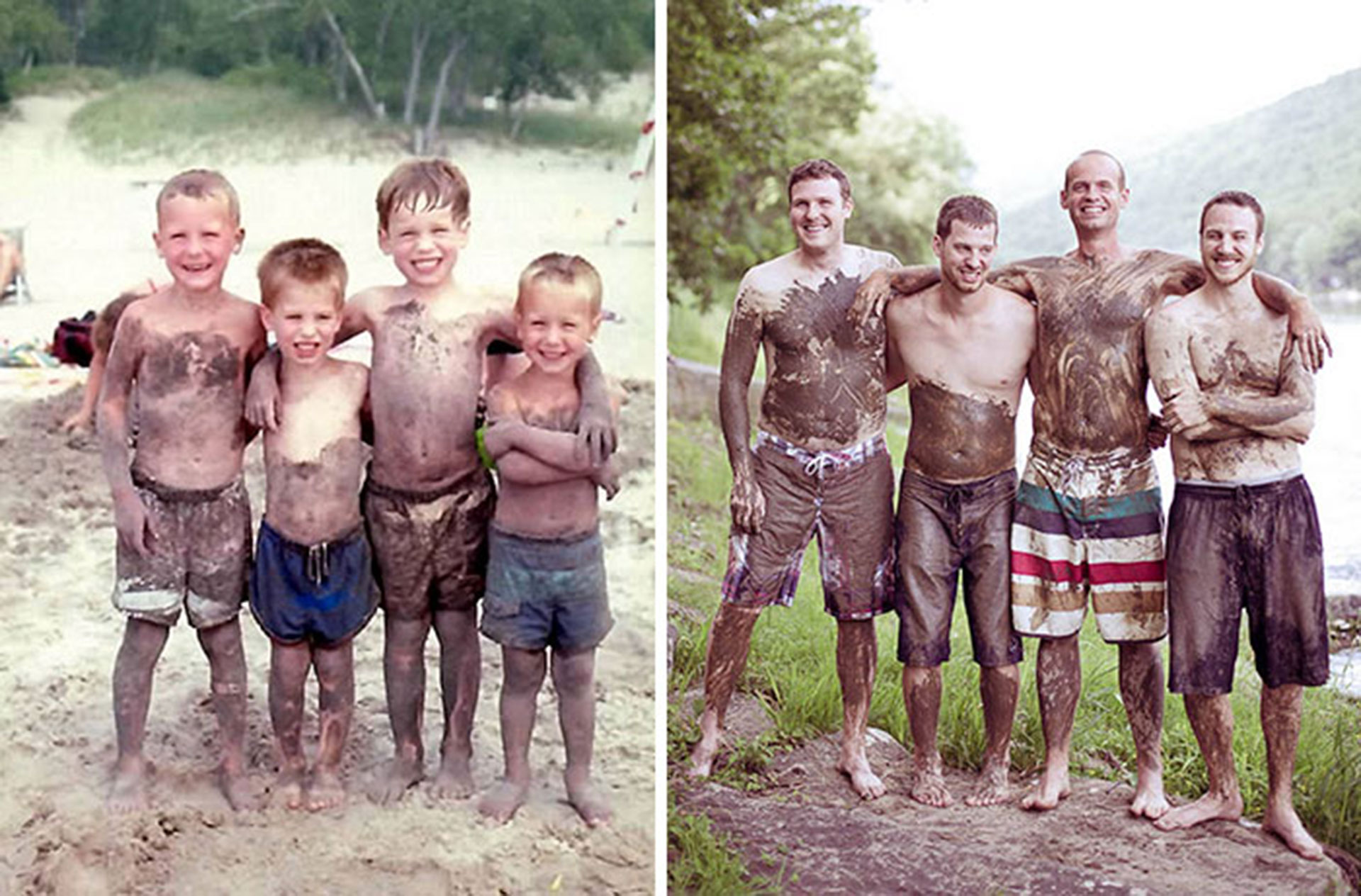 Here you can see some real effort to recreating one favorite childhood photo, and even their picture depicts that. Yes, they even agreed to cover up in mud to revive it. It looks like “Daag Ache Hai” tagline suits here, right?

2. Not Much Difference Through the Years 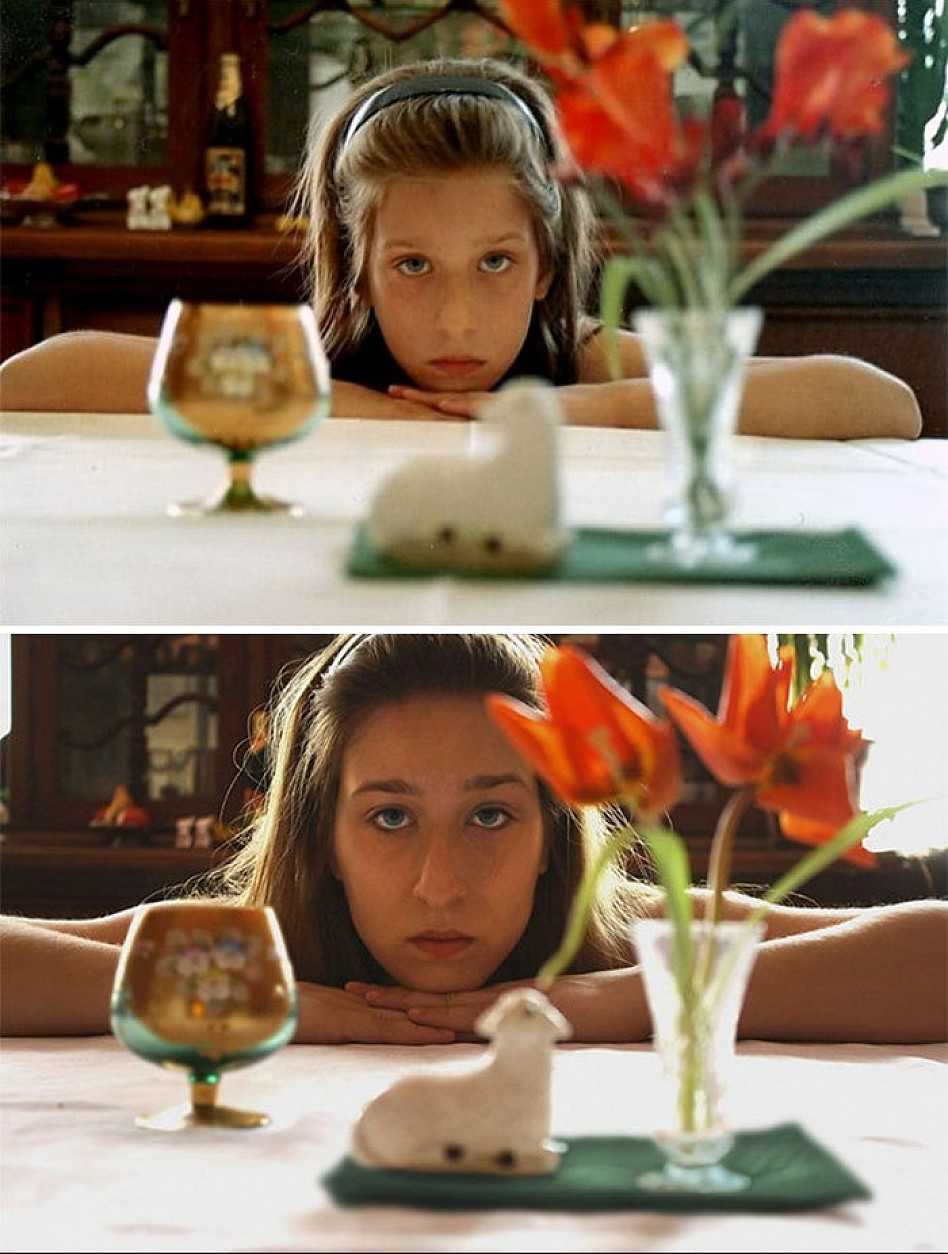 Even if it is a recreation from older times, it seems like nothing much has changed for the young lady. And must say she also has the same bored, indifferent expression along with the similar items placed in the same spot in the photo. 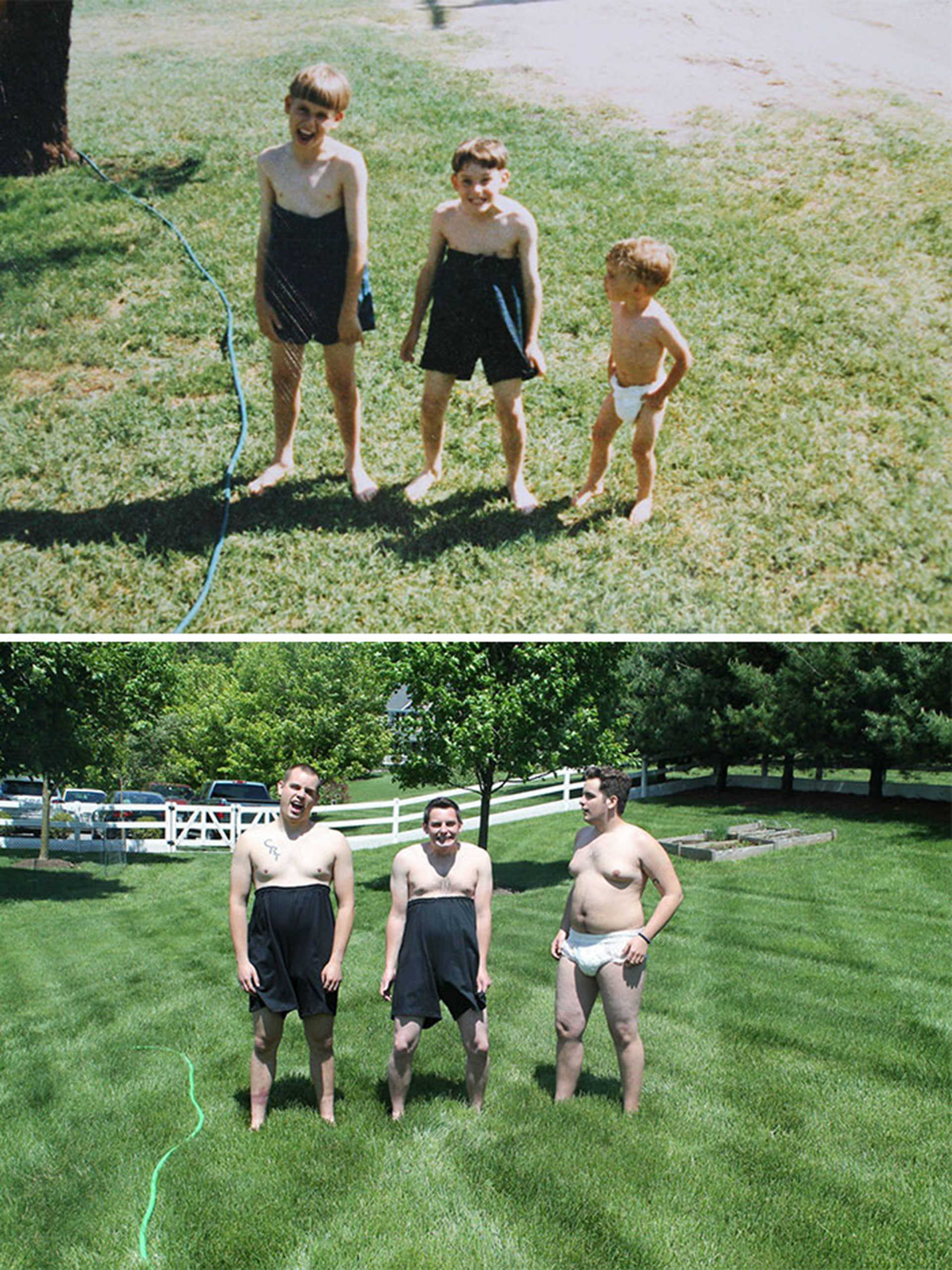 This photo makes us feel like “once upon a time.” Truly this picture says the story itself like when they were young, three brothers took to the yard with their shirts off and shorts on to have some pure,  innocent fun. And, now after so many years, all three decided to recreate the classic photo, well, the new one is a lot more fun than the original. No wonder it’s hard to do such in elder age, but we praise their bravery. Hat’s off! 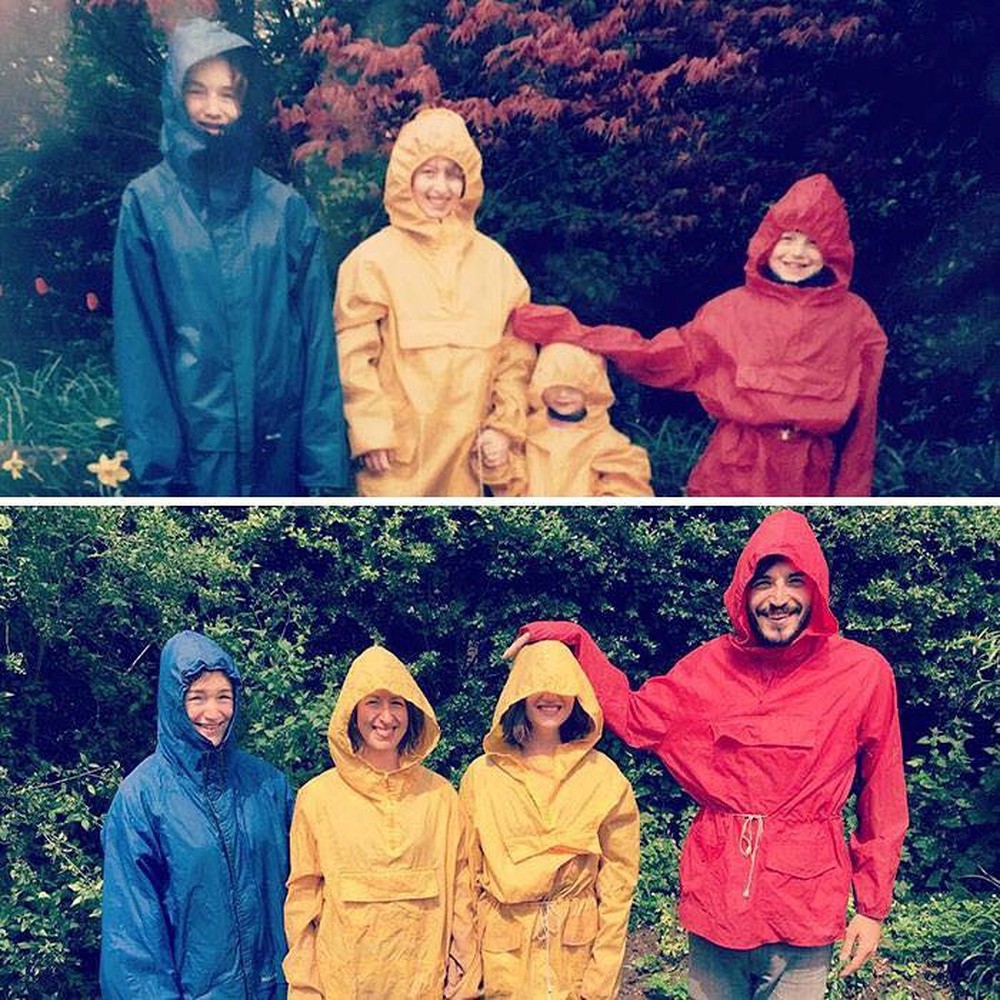 This raincoat recreation siblings photo appears to be one of the photos that make you feel like nothing ever changes. Especially, the same raincoats from the decades in the same color they had as kids give that idea. Only the tall height of little kid that time has passed else remaining picture may confuse many. 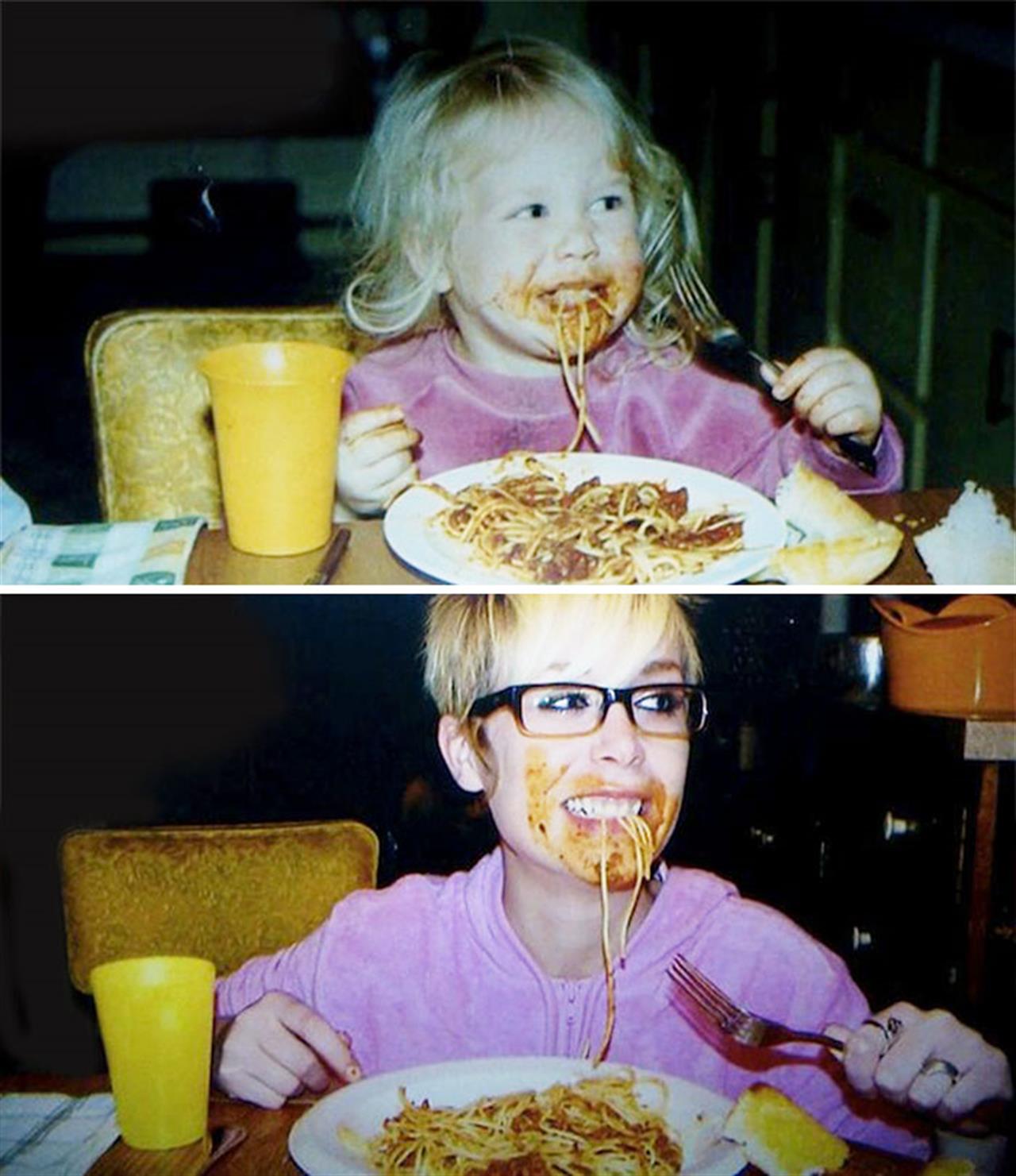 Well, not only the first but second photo is also very adorable and funny. And, an attempt to recreate that as an adult makes for an awkwardly flattering picture. Maybe she was looking for an excuse to eat like that again because no wonder eating like a kid is some different kind of fun. Isn’t it? 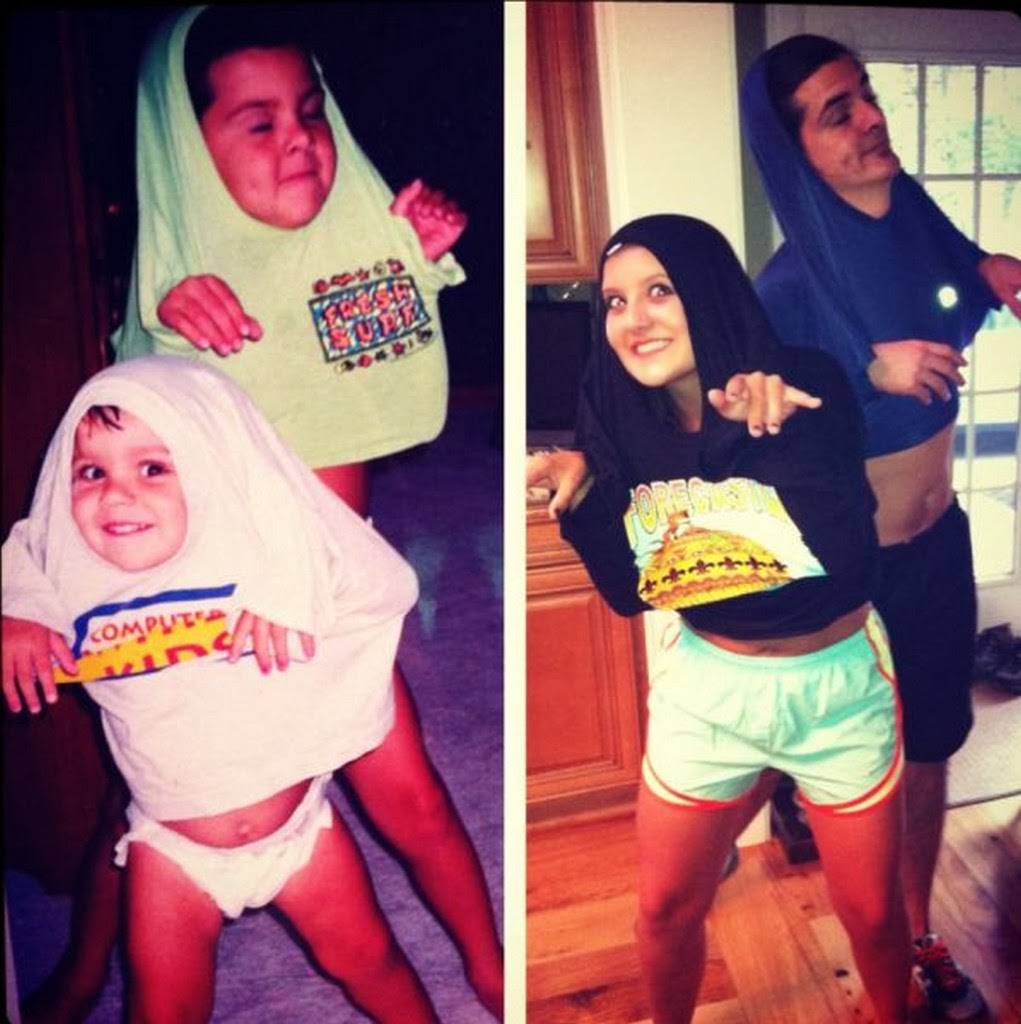 Just one word comes in mind, WOW! Exactly, seems like the childhood of these two passed in acting goofy together. No wonder that even attempt to recreate this moment might have given the real joy to both and the outcome was adorable. The picture itself shows how successful they were in recreating the spirit of the original picture. Truly cute!

7. Only Place is Different 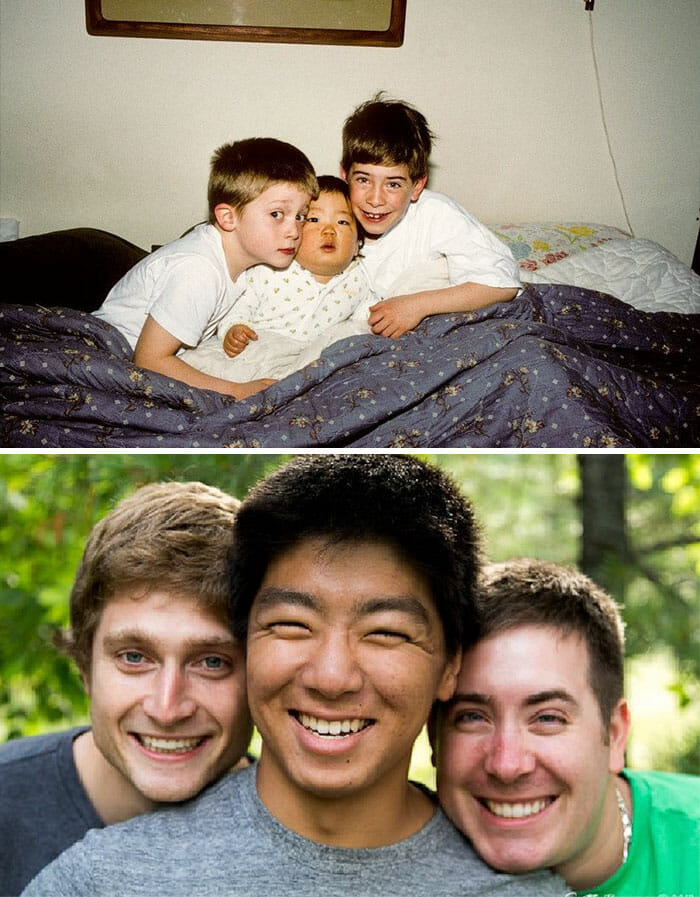 When we’re young, sleeping with siblings is total fun. We all stay up late watching movies, playing video games and talking all night long! Well, must say that who sleep together, stay together a lot. It is exactly the case for these three buddies who stayed together long enough to recreate their childhood sleepover photo in adulthood. 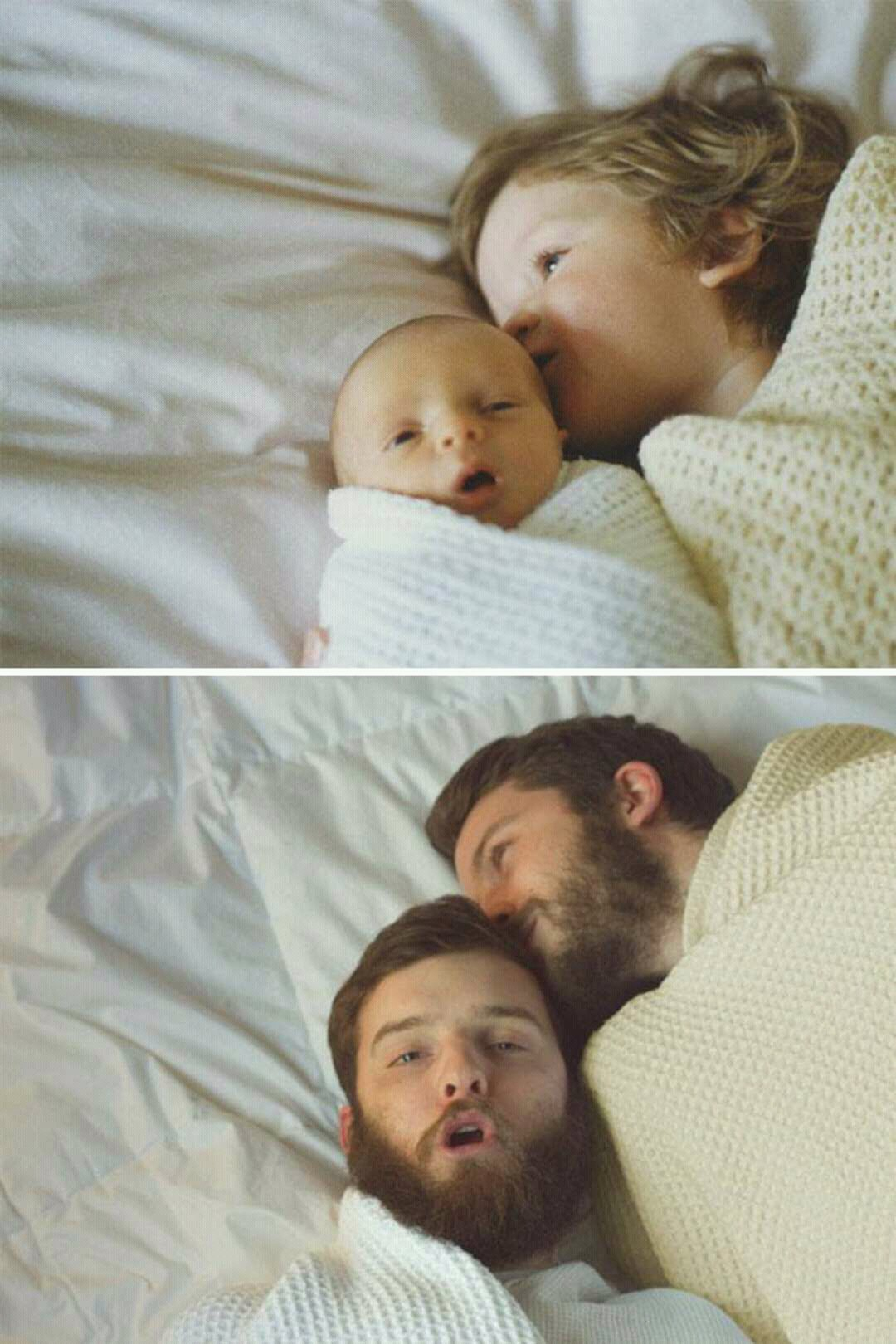 Unquestionably, both photos, the original and the recreation are just lovable! As we can see, the older brother is kissing his new baby brother in the original, while the baby is just shocked to see him kissing! Must say, the recreation of the expression is epic. The picture shows how they still love each other, just like they did back then!

9. Only the Tattoo is Missing 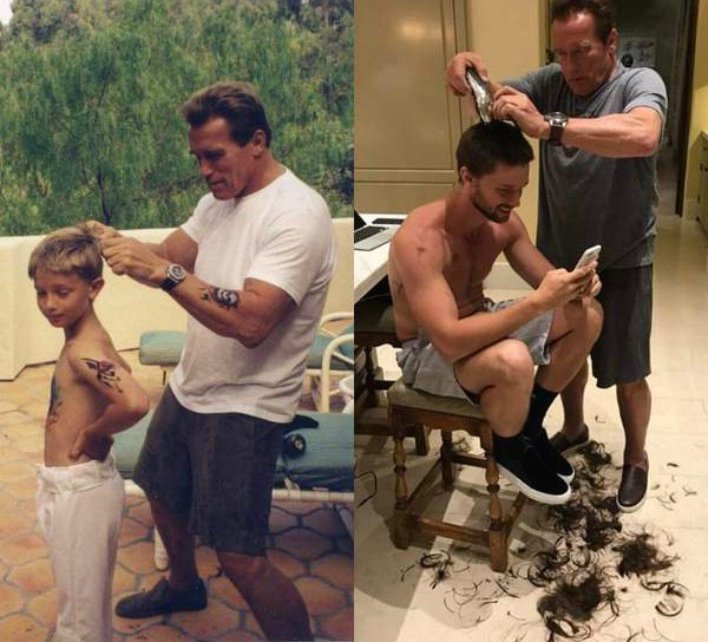 Arnold Schwarzenegger who is known for his role in The Terminator became hair terminator for his son. Yes, seems like,  in his free time, he cuts his son’s hair just like other parents. Well, the recreation confers how some things change, but still, some things stay the same. And, this is adorable that with all of the passing years Schwarzenegger’s son still gets his haircut by The Terminator. Cute, right? 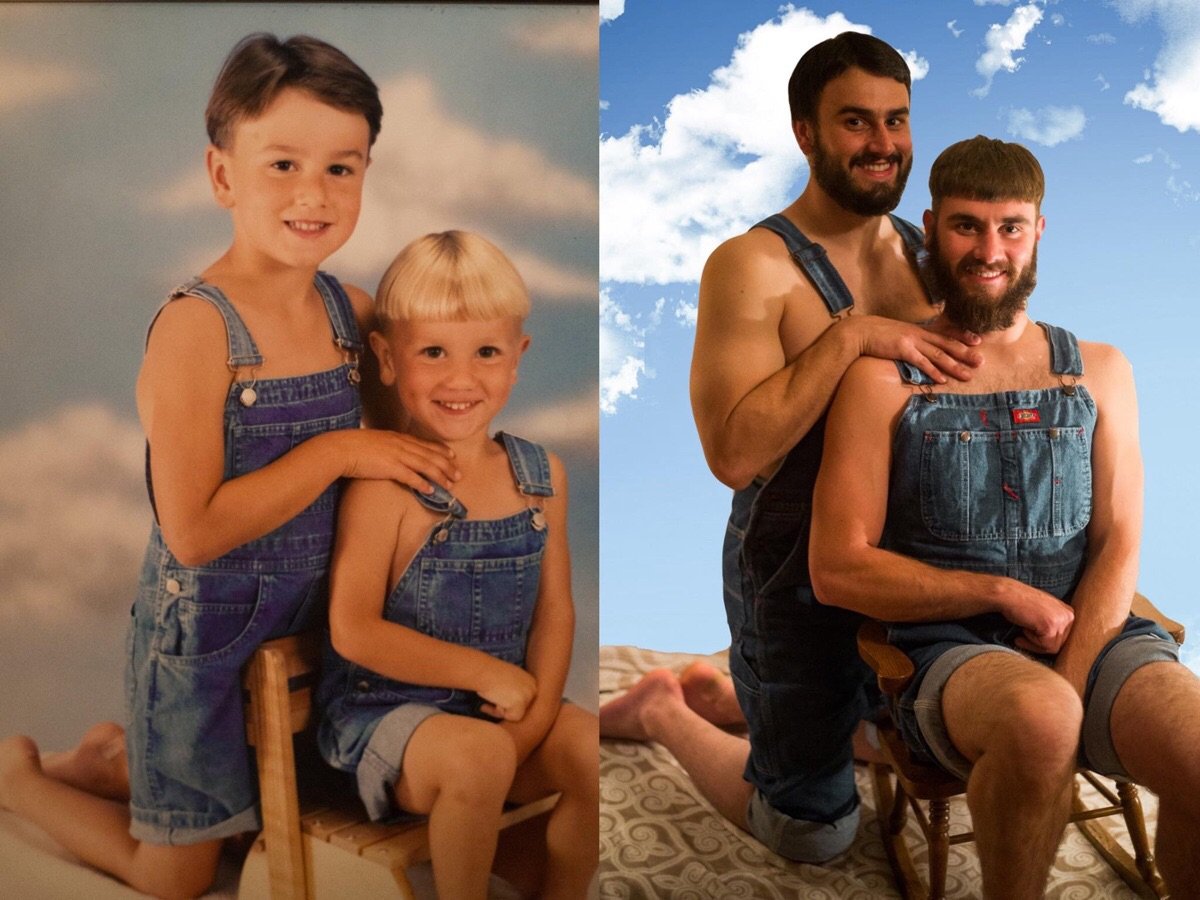 These kind of jumpsuits were popular among the kids of the ’90s. Believe it or not, kids do look cute wearing them. And, as per recent trend, it’s women who are pulling them off. Anyway, coming to the photo, it is proved that no grown man should ever wear them ever again. No offense but it is weird.

11. Even Daddy is Involved 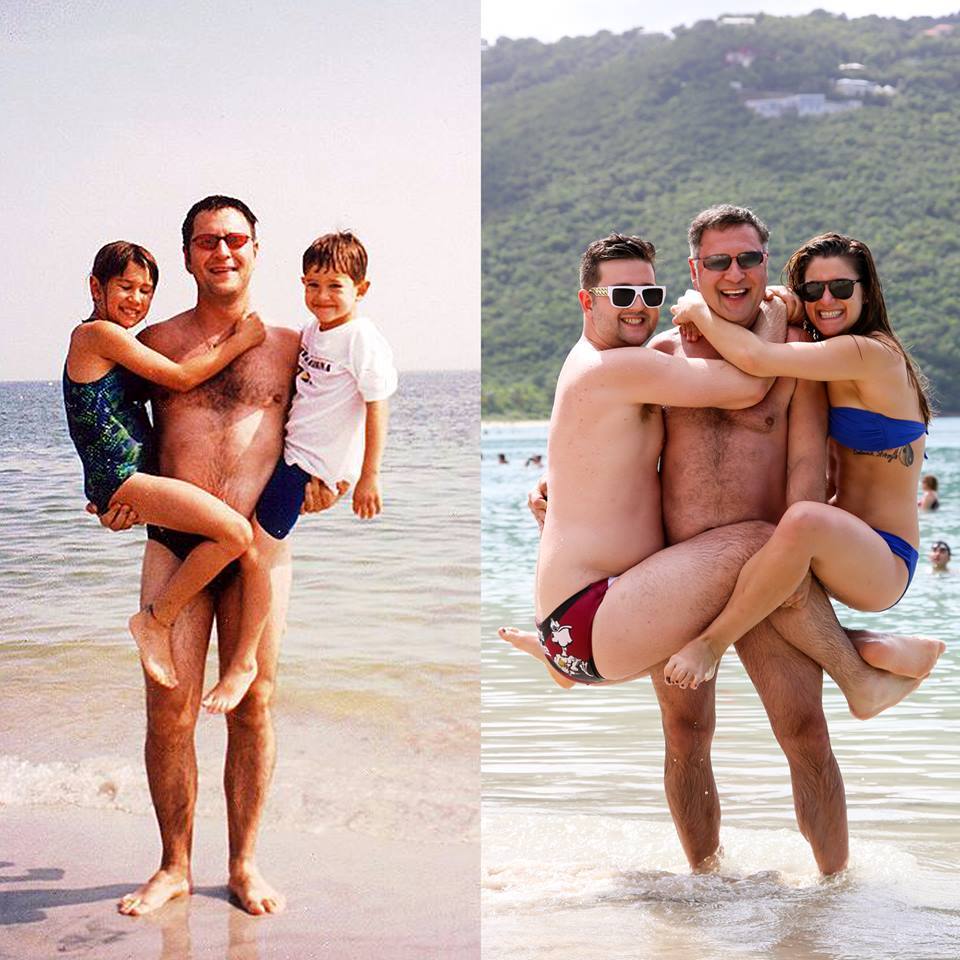 There is no doubt that some family photos are difficult to recreate, and this is one of them. The children have grown while the father has shrunk. Appreciable that how the father manages to hold on to his two grown-ups. However, it does make for a very cute photo. Make sure you hold tight, daddy! 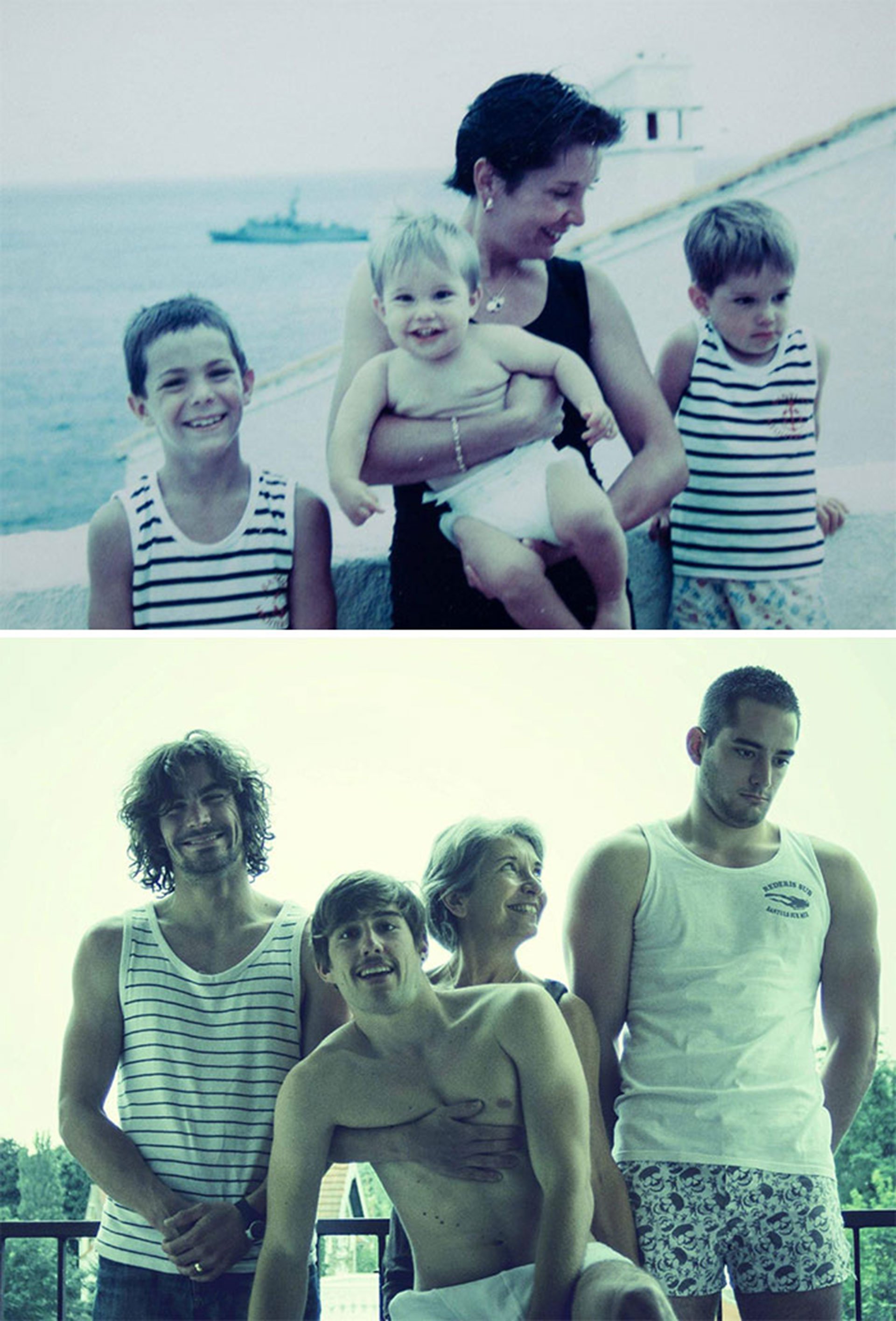 Look at the baby of the family! This picture truly shows that once the youngest, always the youngest. Overall, it’s cool!

No one thought that recreating childhood memories would be such adorable and hilarious. Truly, looking at all the pics made me laugh out loud. What about you?

Don’t You Want to Recreate One? Go Ahead!