This is dedicated to all the Disney fans and travelers out there. If you want to explore Disney inspired gorgeous palaces, then visit any of these real-world locations that you can also find in the Disney movies. 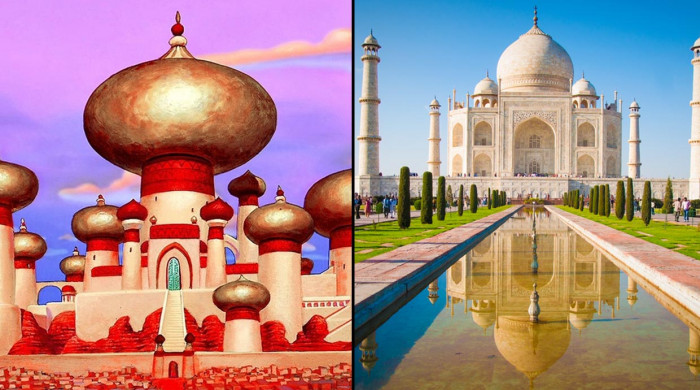 Disneyland is “LOVE”. It’s the only place where we can cherish our childhood memories and where we can all be children.

Disneyland & Disney movies feature some awe-inspiring, otherworldly and fairytale-like settings. The fairytale-inspired palace, the gorgeous mountain, the speaking car and rolling plains are some enchanting things about Disneyland that never fail to surprise us.

Many people wish to visit and experience the fairytale-inspired beauty. Have you ever caught yourself dreaming about Disney inspired place? Do you wish to visit the enchanting worlds of Disney? Do the gorgeous palace, lakes, the magnificent mountains and the breathtaking location strikes in your dreams?

Well, get ready to experience and visit those iconic locations and the beautiful worlds found in our favorite Disney movies. The castles, towns, geological formations, and even buildings in many Disney movies were inspired by real-life locations.

In this article, we have compiled some locations showcasing some of Disney’s most iconic and beautiful places with their real-life counterparts that will leave you awestruck! So, if you’re looking for a fairytale-like destination to go on your next vacation, then try visiting some of these real world locations that you can also find in Disney movies.

The Kingdom of Corona - Mont Saint-Michel in Normandy, France is one of the most beautiful and attractive places around the world that was featured in the animated Disney movie “Tangled”. There is no need to exaggerate why it inspired the castle in Tangled as the island speaks for itself and looks like something straight out of a fairytale. Due to its enchanting and beautiful looks, it is a great attraction for tourists.

If you are a die-hard fan of Disney inspired movies, then you surely know about “The Little Mermaid”. Now that’s really fascinating to unfold that the castle of Prince Eric in The Little Mermaid was inspired by Chateau De Chillon on the Lake Geneva in Switzerland. It is one of the most prominent and iconic monuments of Switzerland. Its beautiful appearance inspired certain princely palaces. The location, nature and look make it a perfect fairytale setting.

When it comes to dazzling Disney movies, how can we miss “Beauty and the Beast”.  Yes, we are talking about the Beast’s castle in the movie that was actually inspired by Château De Chambord in Loir-Et-Cher, France.  You can see this famous location in the Emma Watson’s movie version also. And the fans of the Disney classic can take pleasure of visiting this place. 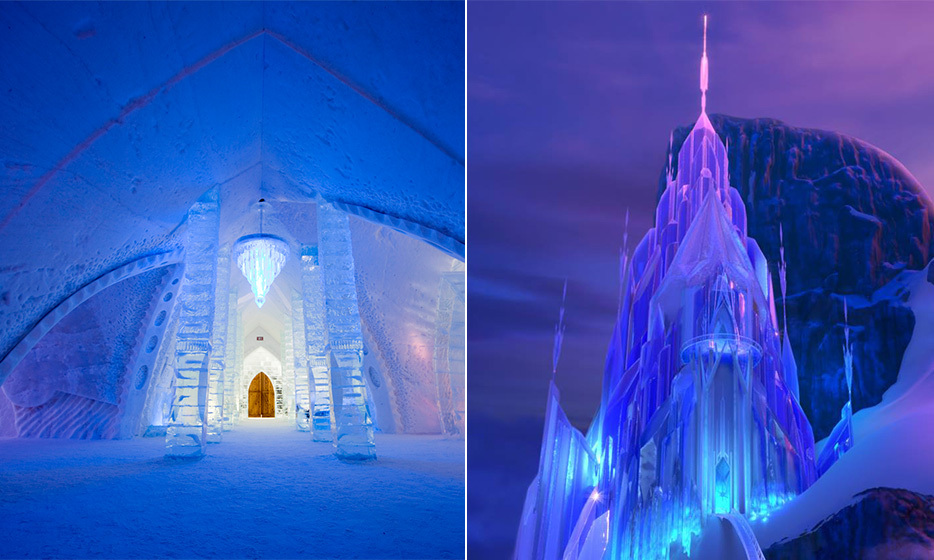 Remember Elsa’s icy power and the glass palace in the movie “Frozen”? The Hotel De Glace in Quebec City, Canada has actually inspired Elsa's glass palace in “Frozen”. It is made of actual bricks of ice and this is one important reason people are too fond of it. The movie’s director Chris Buck visited the hotel five years before the film was released to do some research. He was actually studying ice structures and snow construction so we can't deny that it’s worth a visit. 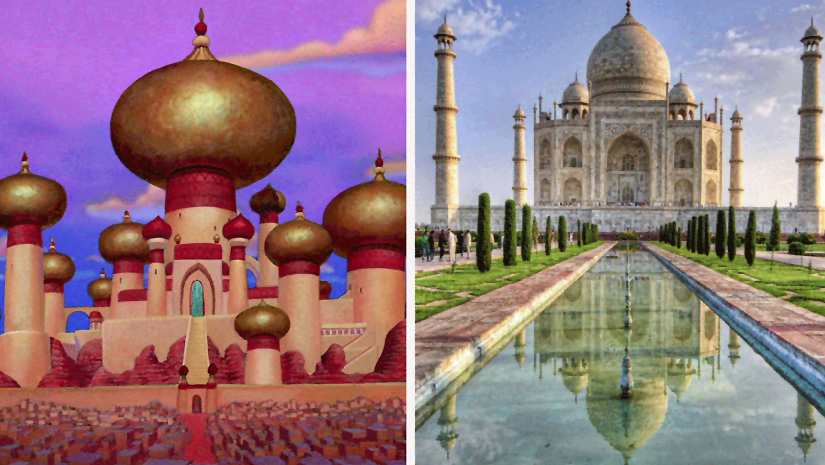 It is really surprising to know that Sultan’s Palace in “Aladdin” was inspired by one of the seven wonders of the world - the Taj Mahal. It is not only a marvelous Indian monument but a famous Disney movie inspiration. The beauty of white marble and the enchanting surroundings of Taj Mahal are enough to attract tourists.

The village and the town where Belle lives in the “Beauty And The Beast” was inspired by the small villages and towns of Alsace. The town looks really pretty in the movie. And after the movie’s release, it become even more popular in the North-Western France. 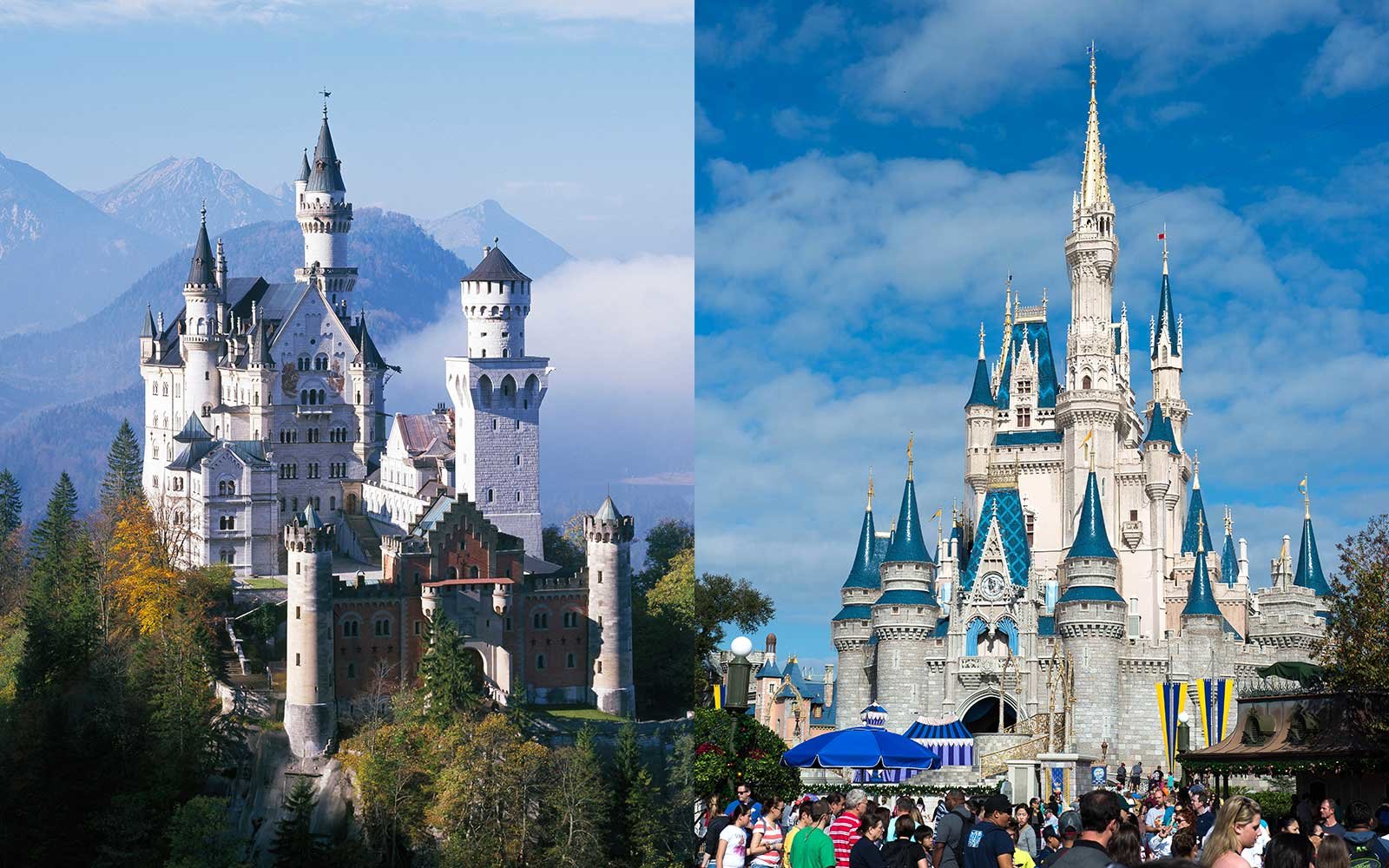 Cinderella is one of the most famous and beautiful characters of Disney movies. We all have watched the beautiful story of Cinderella and the Prince Charming. It is really astonishing to know that the Prince Charming’s palace was inspired by the Bavarian Neuschwanstein. This is one of the major Disney theme park attractions and if you want to experience this in real, then you can visit Neuschwanstein Castle in Germany. Like Cinderella, the “Sleeping Beauty” is also inspired by this beautiful palace.

8) “The Princess and the Frog” - New Orleans, Louisiana

“The Princess and the Frog” is heavily inspired by the New Orleans, Louisiana. From the place where Tiana lives and the normal town to the historic building and other regular locations, all are inspired by New Orleans.

Surprisingly enough, the Emperor's home in “Mulan” was really inspired by Forbidden City in Beijing, China. The striking colors of this magnificent building landmark made the story even more beautiful and brighter. Just look at the picture, it itself speaks a lot.

It seems like most of the fairy tales and Disney movies’ most iconic castles were inspired by fantastic real-life settings around the world!