Oval Office is the working space in the White House where the President of the United States lives. It is beautifully designed and has some hidden facts.

Isn’t it exciting to know the work of Presidents and their lifestyle, how do they work, how much do they earn, what is their net worth, where they live, and more? These questions excite everyone and are always a point of interest. Similarly, the Oval Office in the United States attracts everyone with its cultural history, decoration, and amazing facts.

The Oval Office is the formal working space of the President of the United States and is located in the West Wing of the White House. It is an elegant oval-shaped room that features three large south-facing windows behind the president’s desk and has a fireplace at the north end.

Presidents decorate the office to suit their taste and design their oval-shaped carpet to cover most of the floor. In 1902, President Theodore Roosevelt built the West Wing. However, during that time, the office in his wing was not oval-shaped.

The Truth Behind the Shape of Oval Office 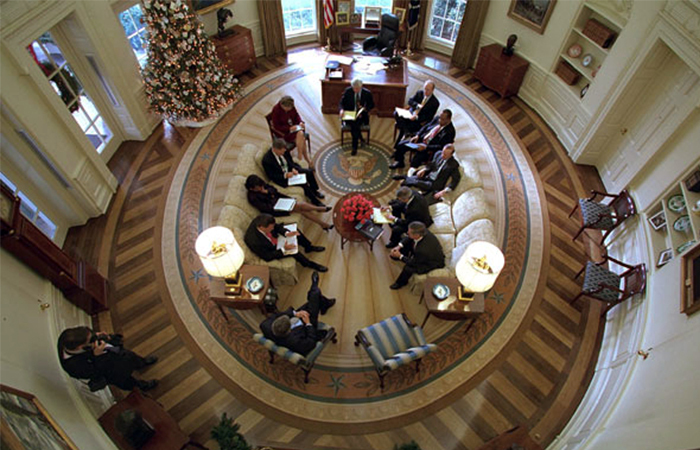 The Oval Office is the main office for the president. After its inauguration in 1909, President Taft organized a competition to select an architect to expand and convert the temporary executive office into a permanent one that was built during Theodore Roosevelt’s first term.

Nathan C. Wyeth of Washington DC won the competition and designed the wing expansion with a new office for the president. He also modeled the new president’s office after the White House's original oval-shaped blue room. The room’s unique shape was inspired by the Blue Room. After Thomas Jefferson became the president, he ended the practice of holding levees and replaced this formal ritual with a handshake.

President Franklin D. Roosevelt hired New York architect, designer, and muralist, Eric Gugler to redesign the oval office in 1933. To create more space without increasing the size of the existing building: Gugler excavated the basement, added a set of offices under the adjacent lawn, and also built a penthouse story.

The modern oval office was designed at the West Wing’s southeast corner, offering Roosevelt more privacy and easier access to the Residence. The office is synonymous with the power and majesty of the American presidency.

The presidency changes the decor of the symbolic room to offer personality and the type of presidency they hope to have. He and Gugler planned a room architecturally more impressive than two rooms with Georgian details: bookcases set into niches and a ceiling medallion of the Presidential Seal. The room is lit up with light bulbs hidden within the cornice that "wash" the ceiling in light.

Decoration of the Oval Office 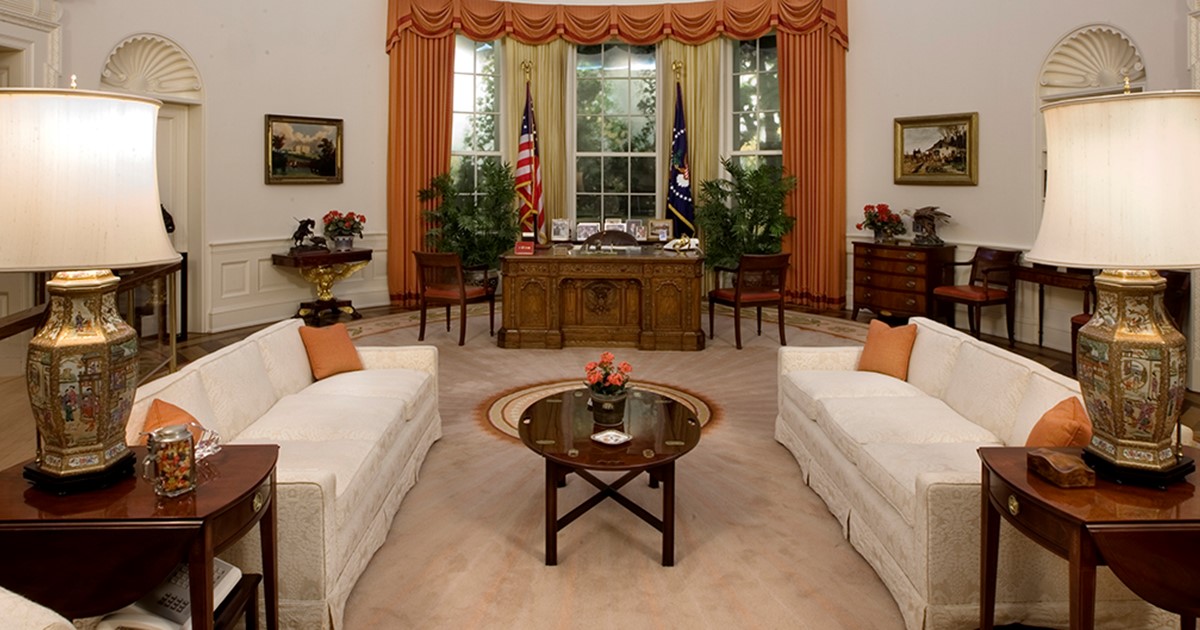 The Oval Office furnishings have a desk in front of the three windows at the south end. It has a pair of chairs in front of the fireplace at the north end and features assorted tables and chairs. Furthermore, it features a Federal longcase clock, made in Boston by Thomas Seymour and purchased by the White House Association in 1972.

The carpet of the Oval Office has the Seal of the President. The first presidential seal was incorporated into President Harry Truman’s carpet. The seal was represented through varying depths of the cut pile.

The carpet was used in the Kennedy and Dwight D. Eisenhower administrations. After that, most administrations are creating their rug and working with interior designers and the curator of the White House.

Six desks have been used in the Oval office by US presidents. The desk was used by Roosevelt in his office at the southeast corner of the West Wing. Another popular deck is the Resolute Desk. It is named so because it was made from the Timbers of the British frigate HMS Resolute (a mid-19th century bark-rigged ship of the British navy).

The ship was frozen in the Arctic ice and was later found by American Seamen. It was refurbished and then presented as a gift to Queen Victoria in 1856. First Lady Jacqueline Kennedy had the desk restored, and she was the first to place it in the Oval Office. When it is not used, a desk is placed in the Oval Office study, in the White House, or sometimes used by the Vice president. 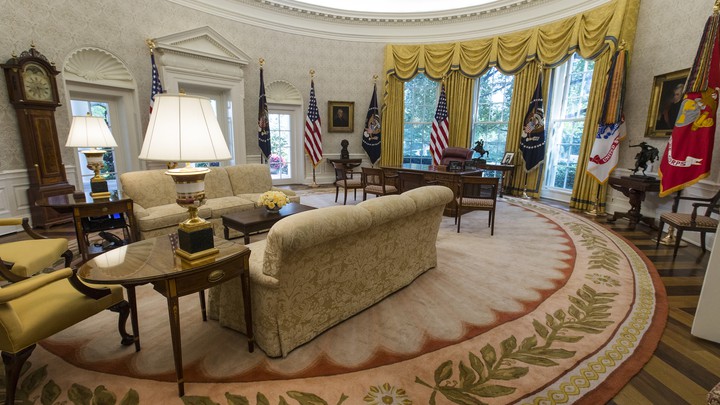 The ArtWork is selected from the White House Collection or sometimes borrowed from museums and individuals. The presidents hung a portrait of George Washington, usually the Rembrandt Peale or the Charles Willson Peale three-quarter-length portrait. A portrait of Andrew Jackson by Thomas Sully hung in Lyndon B. Johnson’s office and Ronald Reagan's, George H. W. Bush's, and Bill Clinton's.

Three cityscapes by minor artists have decorated the walls in multiple administrations. Busts, heads, and statues are displayed in the office. Over the years, the traditional busts of George Washington and Benjamin Franklin have given way to the heads of Franklin D. Roosevelt.

President Harry S. Truman has displayed works related to his home state of Missouri and models of jet-airplanes. He hung a picture of the White House portrait of Roosevelt. President Richard Nixon tried three different George Washington portraits over the mantle and hung a copy of Earthrise (a photograph of Earth and moon’s surface, taken from Lunar orbit by William Anders).

President George Bush hung traditional mixed works with paintings by western sculptures. After the 2001 attacks, British PM Tony Blair lent him a bust of Winston Churchill, who guided Great Britain through WWII. Later, President Barack Obama honored Abraham Lincoln with a portrait of a story and a copy of the Emancipation Proclamation.

President Biden has filled the Oval Office with the pictures of American leaders and has adorned the room with a portrait of Franklin D. Roosevelt that hangs across from the Resolute Desk. The new president changes the room accordingly. Biden is popular for the number of portraits and busts of famous American historical figures. Several people don’t know about the secret room inside Mt. Rushmore that holds important documents.

Some figures are paired with paintings of president Thomas Jefferson and treasury secretary Alexander Hamilton hung near each other. Biden’s office is twinned as hallmarks of how differences of opinion, expressed within the guardrails of the Republic, are essential to democracy. The deputy director of Oval Office operations, Ashley Williams, said,

“This Oval is an Oval for Day One. It was important for President Biden to walk into an Oval that looked like America and started to show the landscape of who he is going to be as president.”

The painting of Benjamin Franklin shows Biden’s interest in science. He kept the gold drapes that hung in Donald Trump’s office, which previously were in president Clinton’s Oval office. The furnishings like couches and tables have come from the White House collection.

The Furniture and the Floor 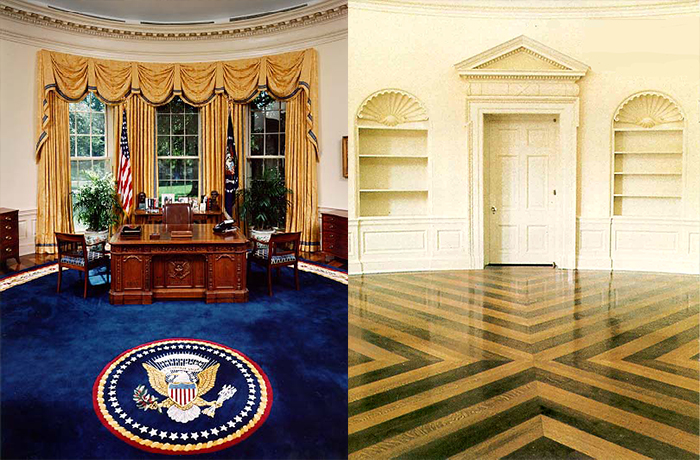 The majority of the presidents have chosen to use the Resolute desk to type their emails. The desk is made of timber from a British ship and was returned to the dom as a goodwill gesture. In the office, there are four desks made from this timber. The three desks are at different locations and museums across the UK.

The office is decorated in a neutral tone, and furnishings are done as per the President’s request. The most important feature of the Oval Office is the floor. You can rarely see it as it is always hidden below the rug. The floor was ordered by President Reagen in 1982 and highlighted a walnut cross parquet based on a 1993 sketch by Eric Gugler.

Designed by architect Nathan C. Wyeth, the place was modeled upon the Blue Room. The oval shape is the unique feature of the legendary office and remained intact in history through renovations. The room has three large windows behind the president’s desk.

It has a fireplace in the room. The doors lead to the corridor, a dining room, and the Rose Garden. 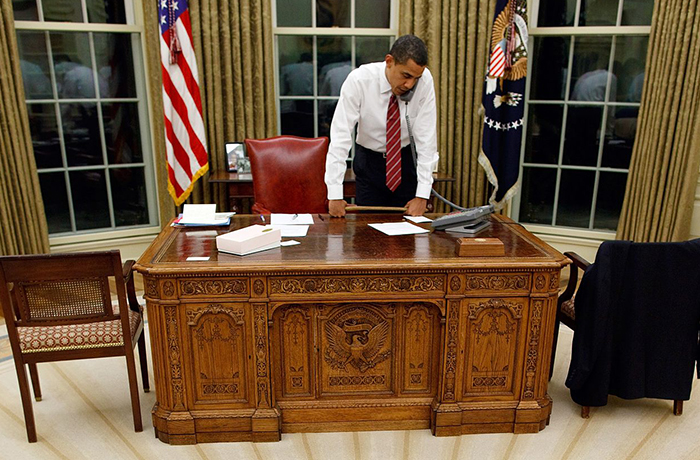 The Oval Office is the most important office in the United States. Let us know some important facts about this place that not everybody knows.

The Oval Office is the formal workspace where the President addresses his staff, diplomats, and other dignitaries. Do you know other important things about the Oval Office? If yes, then share below.