OMG !! Is It The Diet Of Respectable Rock For Fast and Furious 8?

No doubt, The Rock – Dwayne Johnson is one of the highest paid actors in the industry. He is the best of his times and the mo... 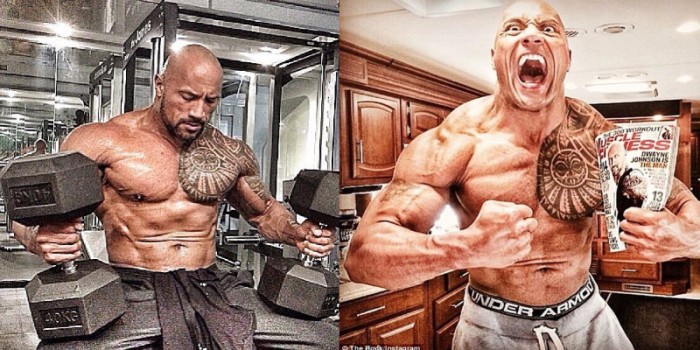 No doubt, The Rock – Dwayne Johnson is one of the highest paid actors in the industry. He is the best of his times and the most electrifying man in the entertainment world. This dashing man has a mammoth of fan followers worldwide and the reason behind his long list is his perfect physique. Unlike other celebs who often avoids diet schedule, the Rock is the one who strictly follows  diet to make the next character more focused.

Dwayne Johnson seems to get bigger with every movie. He really works hard to maintain it. Obviously, his great physique is one of his top priorities. Johnson has already impressed his fans with his added mass for the latest installment of Fast and Furious. In his latest Instagram post, he put a number on the transformation i. e. 22 pounds. Not only this for his last release Baywatch, the Rock weighed in at a lean 238 lbs – but for F8 he aimed of 260lbs.

Don’t you want to know how your favorite celeb manages to put on and lose weight so certain? Interestingly, The Rock himself has shared his eating schedule and the gyming sessions details on his Instagram for Fast and Furious 8.

He hinted about the 6000 calorie, per day diet plan that his fans will see in F8. He posted –

The 6,000 calorie per day diet, training and focus is hard core. When you see #Fast8 it’ll all make sense.

And when you see where we’re going with the character in the future it’ll really make sense – and you guys’ll reaaaaallly dig it.

Long 20+ hr work day. Started in New York, ended in Detroit. Post workout/pre sleep meal.. greens, potato and dead cow. Hell, we may as well do it all again tomorrow. ????

When he isn’t busy with any of the meals, you can reportedly find him in Gym. You all are aware that he loves to work out – may be too much.

Takin' a quick break between our Saturday sweat sets. My phone's blowing up and apparently, #FateOfTheFurious is the biggest global box office opening of all time. It's not official yet, but the moment it becomes gospel I'll let you know. If it's true, then you know gratitude is my jam and I'm SO GRATEFUL for the luv. If it's not true, then I still luv ya back, but dammit its time for me to get back to jackin' iron and carrying around my shaker cup like a little boy carrying around his blankly. #SaturdaySweat #WestCoastIronParadise #ImHearingARumor #FateOfTheFurious #BiggestOpeningOfAllTime #HobbsTheBeast??????????

He shared his regular diet routine for F8 with “Bodybuilding.com.”

He workout 6 days a week. It totally depends on the schedule, he also enjoys workout 2 times a day (in the morning and evening).

He doesn’t play around the gym but, always aim to be the hardest worker.

I work out six days a week, and usually in the morning. But depending on my schedule, I may also [train] in the evening.

But I definitely prefer the morning. With the iron, I separate all body parts: legs, back, shoulders, chest, biceps, and triceps. I mix up dumbbells, cables, barbells, and machines.

My workout is constantly changing and adapting, but for the most part, I do 4 sets of 12 reps with a 60-90-second rest. I don’t play around in the gym. I always aim to be the hardest worker, and I make sure I clang and I bang to the best of my ability.

Chalked up. Pushed thru the pain. 21's. Many of you know the drill. A good morning of work. #BoneyardHogs #FunPain #YardShit

Oh great! His working schedules were worth waiting! His drastic transformation in his recent release F8 is really inspiring and has given us chills. If you really want to buck up like Dwayne Johnson, the foods mentioned is a good starting point. Obviously, the gyming sessions are not for the beginners but are worth noting for future.