T-Series vs. PewDiePie, an online competition between two YouTube channels, came to an interesting end. Yes, T-Series becomes the first YouTube channel to cross the 100M subscriber mark. Know all about the battle here! 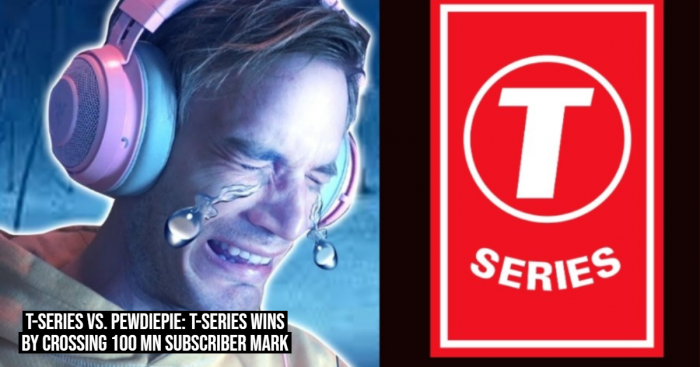 It’s nothing new that people are talking about the subscribers of T-Series or PewDiePie. Yes, it’s the online battle going on since long ago.

But recently there is a change in the graph that T-series, an Indian YouTube channel, has become the first channel to cross 100 million subscriber mark on YouTube, the video-sharing platform. Hence, the channel beats its competitor PewDiePie, a Swedish YouTuber, who currently has a subscriber base of 96 million.

Since October 2018, PewDiePie and T-Series have been in battle for the YouTube crown. And, for the last five years, PewDiePie was leading in terms of subscribers. But now things have changed!

T-Series vs. PewDiePie: The Online Battle That Seemed Never Ending 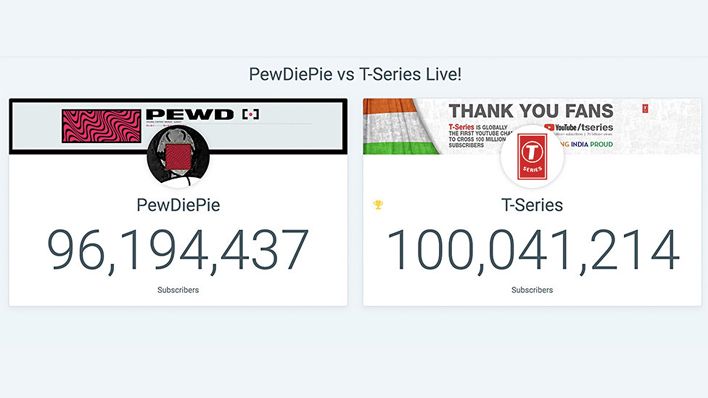 T-Series vs. PewDiePie or PewDiePie vs. T-Series was an online competition between two YouTube channels, T-Series (an Indian record company owned by Bhushan Kumar) and PewDiePie (owned by Felix Kjellberg), to grab the first spot in the run of the most-subscribed channel on YouTube.

Since early 2017, T-Series has held the title of the most-viewed channel, and since 2013, PewDiePie was the most-subscribed channel on the video-sharing platform.

It could be said that subscriber count for both channels was increased in the middle of the online battle. And, both of them crossed 90 million subscriber mark within hours of each other in March month. However, by the end of March, PewDiePie's reign as the world's most popular YouTube channel finally ended.

However, PewDiePie was temporarily overtaken by T-Series on numerous occasions in 2019. Yes, on 27 March 2019, they became the most subscribed channel for five consecutive days, but soon after that, PewDiePie retook the lead.

However, if we talk in terms of videos, T-Series has uploaded 13445 videos whereas PewDiePie has uploaded only 3851 videos.

According to Social Blade, a company who keeps track of statistics of social media platforms including YouTube, T-Series was predicted to cross the 100 million mark on 21st May 2019, while PewDiePie, the Swedish YouTuber, was expected to cross 100 million marks by June 2.

Earlier in March in the run of the battle, Bhushan Kumar, the Chairman and Managing director of T-Series, appealed the Indian citizens to subscribe to its channel with the #BharatWinsYouTube campaign by posting a clip on his official Twitter handle.

“We’re on the brink of becoming the world’s biggest @YouTube channel. We can make history. We can make India win. Subscribe to @TSeries  #BharatWinsYouTube http://bit.ly/TSeriesYouTube ”

We’re on the brink of becoming the world’s biggest @YouTube channel. We can make history. We can make India win. Subscribe to @TSeries #BharatWinsYouTube https://t.co/izEu8dzHdf pic.twitter.com/dJumzHwADa

To support this, many Bollywood personalities such as Sonakshi Sinha, Varun Dhawan, Salman Khan as well as singers like Armaan Malik and Neha Kakkar shared the post on their handles.

But, PewDiePie was unable to hold off T-Series despite the much efforts as T-Series was already gaining around 1 million new subscribers each week and that too only on its primary channel. 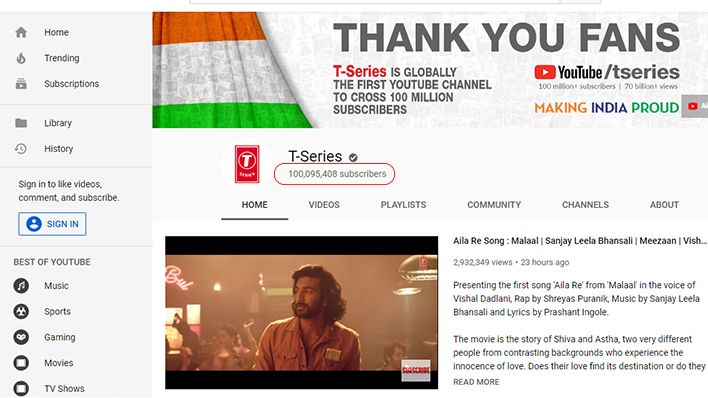 T-Series, an Indian YouTube channel, is an Indian music record label and film production company. Run by a team of 13 people, it has a multi-channel network consisting of 29 channels on YouTube. Mainly, T-Series channel contains Bollywood film trailers as well as Indian music videos (Indi-pop and Bollywood music), uploads numerous videos every day, and has uploaded 13.4 thousand videos as of 29 May 2019.

Apart from all, ranging from kids content to comedy, there are 25 other channels T-Series has across YouTube alone. And all these videos garnered 13 billion views in the last 90 days alone, which is 3 billion more than PewDiePie garnered in the last three years.

On their description page, they wrote,

"Music can change the world". T-Series is India's largest Music Label & Movie Studio, believes in bringing world close together through its music.
T-Series is associated with music industry from past three decades, having ample catalogue of music comprising plenty of languages that covers the length & breadth of India. We believe after silence, nearest to expressing the inexpressible is Music. So, all the music lovers who believe in magic of music come join us and live the magic of music with T-Series.

Launched in 2006, the T-Series YouTube channel, having an exhaustive catalog of music across languages and genres, has been associated with the music industry for the past three decades.

Hence, T-Series announced their achievement through a social media post on their official Twitter handle. They wrote,

“World’s biggest YouTube Channel, T-Series has achieved another YouTube milestone by being the first one to cross an astonishing #100MillionSubscribers.
Thank you for being part of our journey. T-Series - Making India Proud. 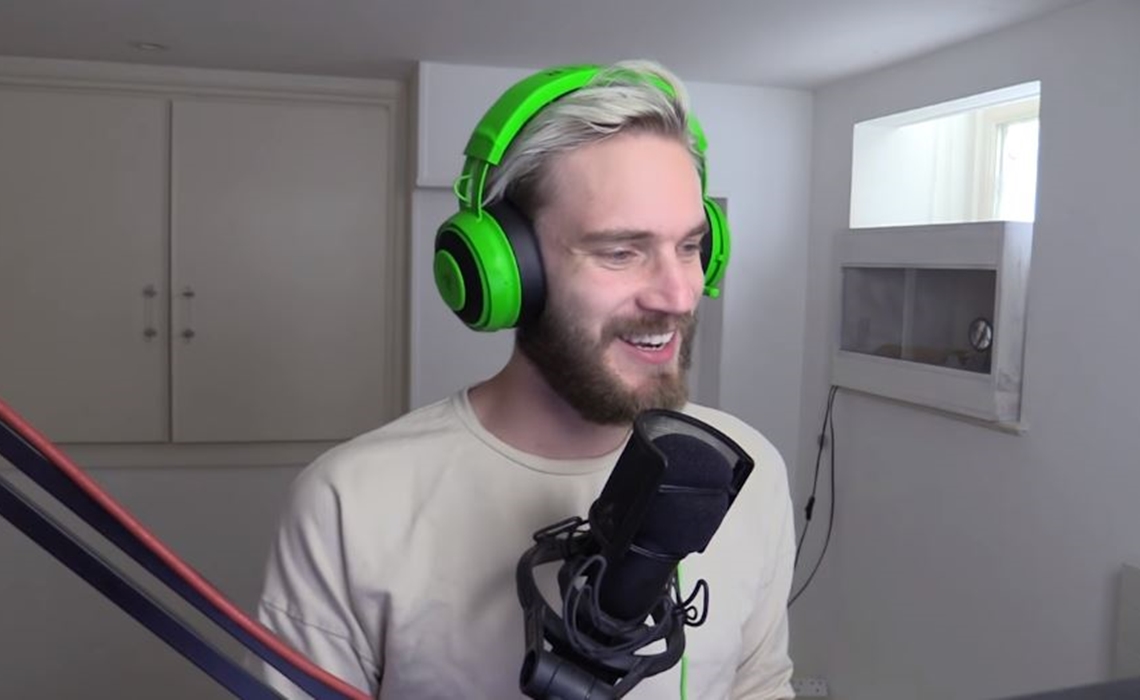 About the win of T-Series, Denis Crushell, Managing Director at Tubular Labs (a video analytics platform), said in discussion with The Independent,

“We're starting to understand the volume of viewership YouTube can deliver... Media companies will try to replicate this, but we have to put into context PewDiePie's performance in the last six months - 3.9 billion views demonstrate that influencers and personalities will continue to succeed alongside media content.”

PewDiePie, one of the most successful YouTube celebrities of all time, having the original name  Felix Arvid Ulf Kjellberg creates comedy videos and commentary videos. Previously, he has been known for his Let's Play videos.

Until he was finally surpassed by T-Series on 22 February 2019, PewDiePie's channel had the most subscribers from 2013. But soon after that, in approximately 8 minutes, PewDiePie took back the top spot.

The Swedish YouTuber has over 3.8 thousand uploaded videos and 96 million subscribers, along with 21.3 billion views on his channel. Moreover, Kjellberg calls his fan base with the name "9-year-old army".

A month ago, acknowledging his own YouTube channel PewDiePie's defeat, Felix Arvid Ulf Kjellberg shared a music video with the title 'Congratulations.'

And then again, he shared the video titled, Congratulations 2.

However, after an order by the Delhi High Court (India), two of PewDiePie's videos regarding 'Congratulations' were removed from the platform.

According to independent, PewDiePie had said previously that he "didn't really care" about T-Series; still, he went on to enlist his crowds of fans to help keep his number of subscribers more than T-Series.

Also, in a video posted to his channel in October, he said,

“It's already a heated subject not that a company is taking over.”

“Everyone is going on the rant, 'YouTube is not really becoming YouTube' and, 'it's never going to be the same now'... I think if YouTube does shift in a way where it does feel more corporate, [then] something else will take its place.” According to some reports from SocialBlade, a social media analytics page, T-Series gains approximately 1,45,000 subscribers per day, which is higher than 30,000 subscribers that PewDiePie gains daily on an average.

Well, the consistency and the mechanism that is contributing to the success of T-Series online seems the obvious reason for this victory. Moreover, T-Series has an entire army of employees and Bollywood stars who rely on it, whereas Pewdiepie is only one guy who is uploading video content with a lot of freshness in it. And, in contrast to Pewdiepie’s vlogs and video game streaming per day, T-Series comes with highly produced music videos daily.

Around eight months ago, PewDiePie uploaded a video titled “THIS CHANNEL WILL OVERTAKE PEWDIEPIE” regarding the popularity it was losing daily as T-Series also holds many other YouTube records. Hence, the above facts already indicated that the reign of Pewdiepie was going to end.

On a concluding note, a big congratulations to T-Series on becoming first YouTube channel to pass 100 million subscribers!