Raj Kumar Verma from Gorakhpur, Uttar Pradesh, is the creator of the world’s smallest book, which is a handwritten version of the Indian holy book, Hanuman Chalisa, and has miniature paintings in it. 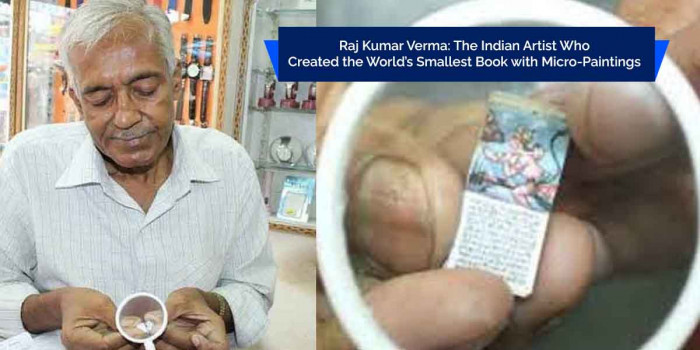 One side of his hand-painted book consists of 25 pages painted with micro-miniatures and hand-made portraits of various famous people like Picasso, Leonardo Da Vinci, Rabindra Nath Tagore, and MF Hussain. On the other side, it has text about the work of these artists. He took four decades to create this miniature artwork.

Verma Created These Miniature Books with Naked Eyes, But They Require Readers to Use Magnifying Glass 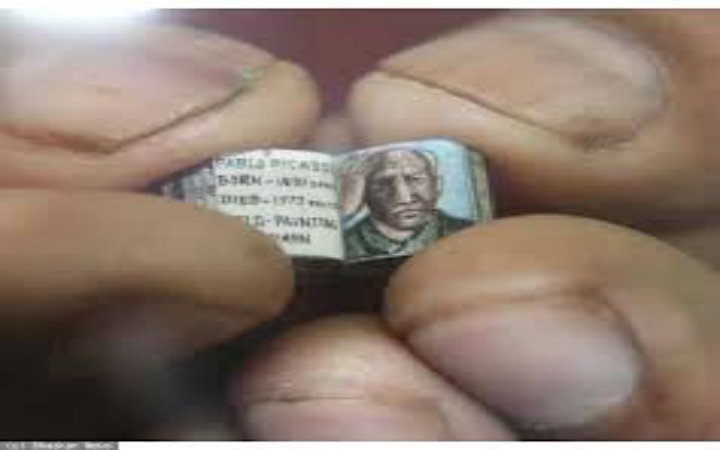 These miniature books can be kept on the fingertips and are very lightweight (almost negligible). These books come in coin-sized transparent boxes. Interestingly, you have to use a magnifying glass to read these books, and Verma claims that he makes them with naked eyes. He said-

"I have not used any machine for printing it. The entire work is done manually. I do not even use spectacles while writing and painting these books at the age of 62."

A shopkeeper by profession, he is a self-taught artist and has not taken any formal training in arts. He says-

"I was an artist by childhood. I sketched and painted portraits as a child and later on switched to micro paintings. The term 'micro painting' is self generated, as I see no other specific name given by any professional to this particular art.”

Imparting training to school children at his home, Verma is spreading the art of miniature and micro paintings. He said-

"Initially, I was recognised by art lovers for writing names, religious texts, messages on the rice grain. I used to set up stalls at the art and handloom exhibitions."

He also specialized in making micro paintings of 3 cm to 0.75 mm on paper and cardboards. He said-

"Some of the best works include images of Ram Darbar, images related to mythological tales and stories from religious texts and books." 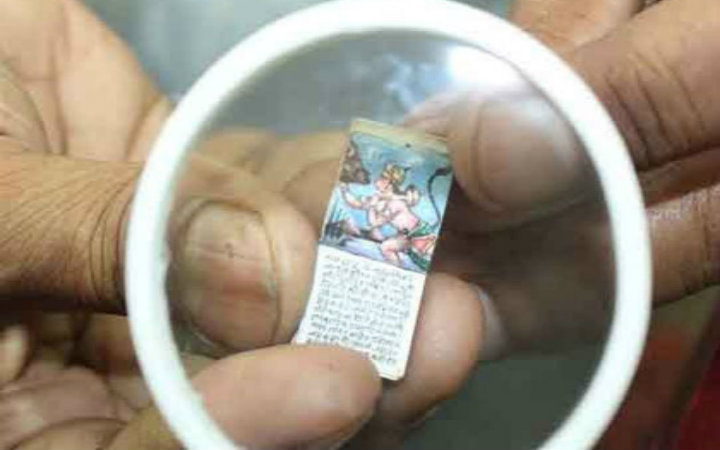 His version of the Indian holy book, Hanuman Chalisa, is the smallest one and is only 1 cm in size. It took him three months to paint the micro and miniature paintings. It has images of Lord Hanuman that depict tales and texts of Ramayana on every page.

He believes in all religions. He also created a microcopy of Darood Sharif, which is about 1.5 cm. Verma says-

"I abide by all religions and thus seek only artistic pleasure while making such books. The Hanuman Chalisa is read left to right while the Darood Sharif is read right to left. The sacred book of Darood Sharif was written under the supervision of Muslim experts and gurus. They verified the Arabic text that I wrote, so there are no questions of any folly in it."

Verma has been making micro-paintings from paper, cardboard, and food grains to seek perfection. He initially got recognized after he painted an image of Lord Vishnu on rice grain and Lord Hanuman on a pigeon-pea grain (Arhar pulse). He has also prepared a map of India using 880 grains of rice and is priced at Rs 15,000.

In 1992, the state government awarded him for his work. He has also been visiting Bangalore, Mysore, Delhi, Ludhiana, Lucknow, and various parts of India to take part in many art exhibitions and workshops.

Also, he was admired for his work by the then Chief Minister of the UP state, Akhilesh Yadav, who announced to give Rs 15,000 every month as a token of appreciation and encouragement to Verma. However, it turned out to be an empty promise and was never materialized.

Have you heard or read about any artist who creates miniature paintings, artworks, or books? Please tell us about him/her in the comments section below!