Seven Wonders of the Ancient World has been attracting people for a long time. We bet you will love these modern versions of the wonders designed by the artists. 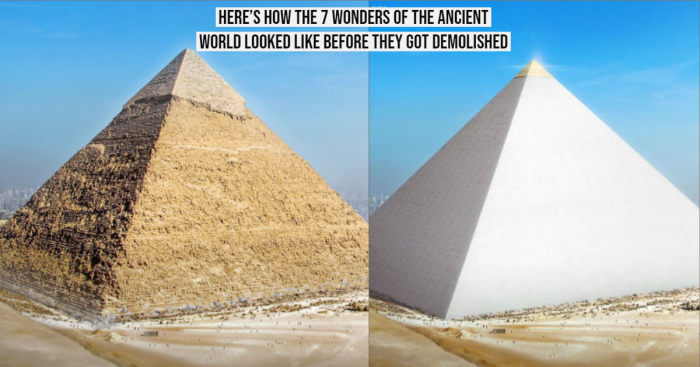 Are you looking for the best locations to visit this vacation? Whether you are planning a family trip, solo, or couple trip, some places in the world have the magic to attract people of all ages. You might have heard or read about the seven wonders of the ancient world in school books. You know who built them and the story behind their popularity. But do you know these ancient wonders are completely changed now and are attracting tourists for many reasons?

Most of the original ancient wonders do not exist now, but some are reconstructed and are giving an incredible sight to the tourists. A list of examples of the remarkable architecture described by various Hellenic authors in poems dates from 1st and 2nd century BC. The list of the classical antiquity includes Callimachus of Cyrene, Herodotus, and more.

If you decide to visit any of these places on this list, you will be disappointed as only one of the original wonders Great Pyramid of Giza has survived the time. It is true that these architectures no more exist, but they continue to inspire artists to use their creativity, and to give the structures a new life. No matter what part of the world they are constructed, the ancient constructions are unique in their way.

BudgetDirect decided to give a new look to these architectures by a 3D effect. The architectural designer duo Erdem Batribek and Keremcan Kirilma presented how these wonders looked like in their prime. (2.1)

The authors of the project said -

“Our goal was to inspire people to rediscover the long-forgotten wonders of the ancient world. We aim to spark the curiosity of frequent travellers and Internet users alike, showcasing areas of the world that perhaps they’ve not read about before and have considered visiting. Our focus was to bring these relics to life so that readers could get a better feel of what they really looked like in their prime. The result is seven animated beautiful reconstructions that bring these unique structures to life before your very eyes!”

So are you ready to see how these beautiful architectures, now ruined, looked like? Here we go!

(Note: The left picture depicts Now, and the right one depicts Then. ) 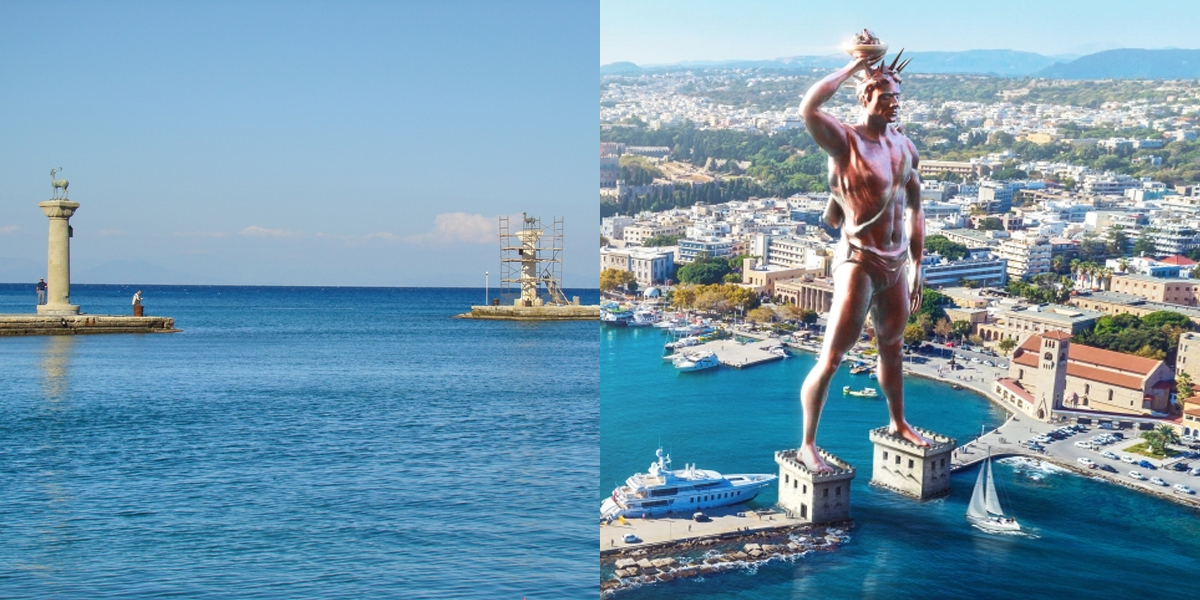 The Colossus was a 104 ft tall statue of the Greek sun god Helios designed over Mandraki Harbour in Rhodes. It built on 49ft marble pedestals that allowed ships to cross between his legs. The statue was built this way to let outsiders know who the boss was.

The Rhodians built this statue from the melted-down remains of defeated Cypriot army’s arsenal. The symbol of unity or the Colossus was designed at the beginning of 304 BC by Chares of Lindos. Fifty-six years after the statue was built, it couldn’t withstand the earthquake and got dismantled.

The statue remained in the hearts of Rhodians for almost a millennial until the Muslim caliph Muawiyah I melted the statue and sold it as scrap. According to the descriptions, the Colossus stood over 33 meters high, making it the tallest statue of the ancient world. 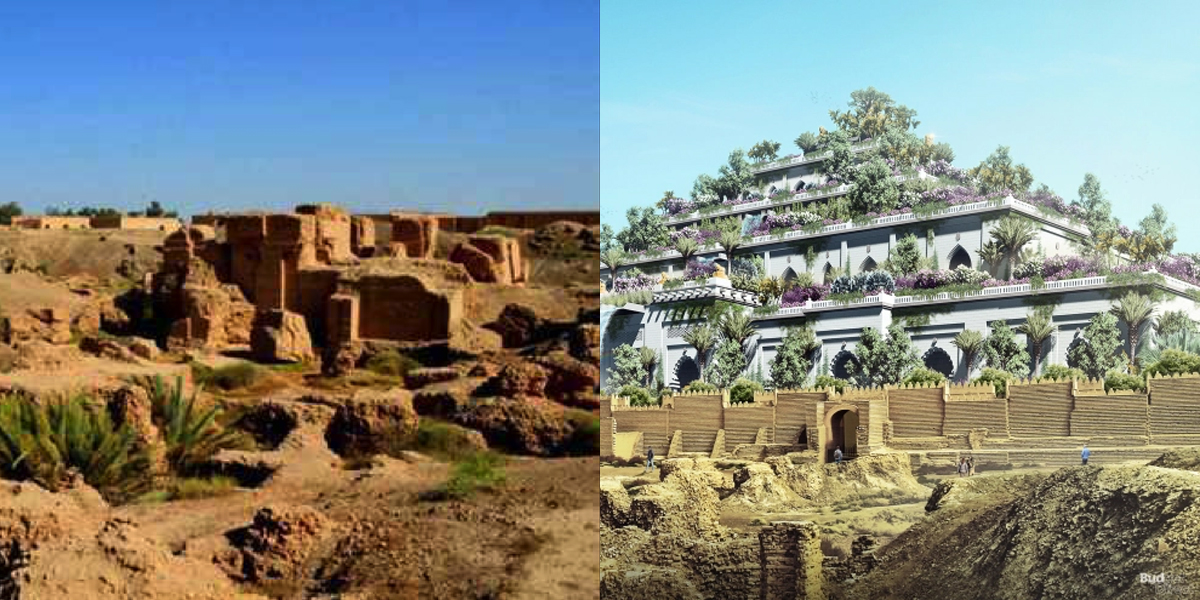 It is still not clear if this wonder of the ancient world existed in real life or was a writer’s imagination. The Hanging Gardens are said to be a gift to Amytis from her husband the Babylon King Nebuchadnezzar as she was homesick for the greenery of the Median Empire.

The native writers of Babylon never mentioned about the garden, but if it existed, it has been an incredible architecture with 65 ft high terraces and complex machinery. There are five writers whose Babylon descriptions are read in several forms today.

According to the experts, this beautiful structure was built near a grand palace known as The Marvel of Mankind. What do you think- did the Hanging Gardens of Babylon exist? Whether an imagination or a true story, the garden looks like a paradise on the earth. 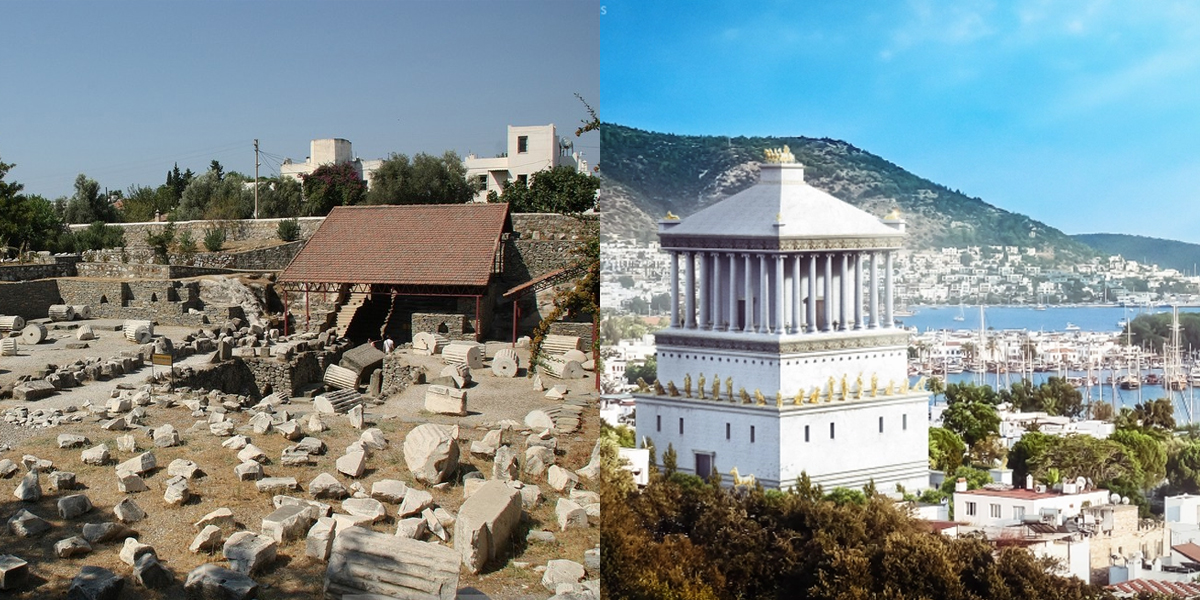 Mausolus of Caria was the king of the Achaemenid empire who conquered Lycia before invading several areas in the region during the 4th century BC. The great structure that was built for the king was so impressive that the rulers’ name became a word describing large monuments.

The structure was made of white marble and reflected Egyptian, Greek, and Lycian architectural features. The tomb made to the list of brilliant sculptures, one of which was a statue of Mausolus riding a chariot. It got dismantled after the earthquake occurred in the 13th century.

The mausoleum was nearly 150 ft in height, and its sides were decorated with sculptures reliefs, each created by Bryaxis, Scopas of Paros, Leochares, and Timotheus.

4. Statue of Zeus at Olympia 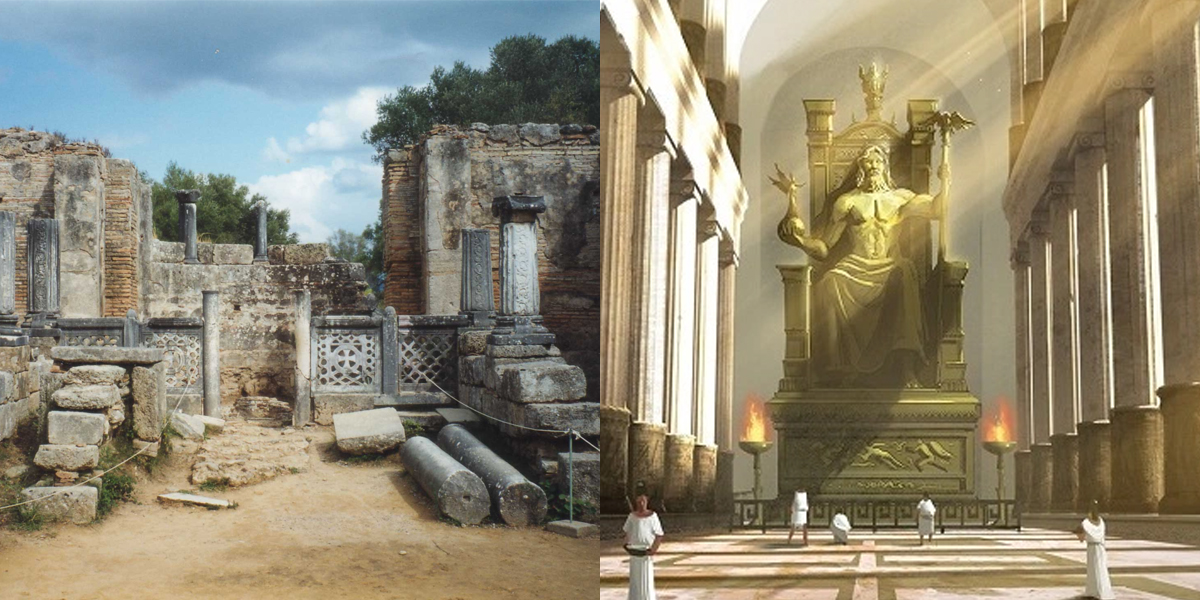 The beautiful 40-foot gold & ivory-plated statue was built at the Temple of Zeus by the Eleans to outshine the Athenians, but it didn’t shine for a longer period. The architect Phidias who supervised the construction of the Parthenon was called again to produce a similar sculpture of the famous male Greek God Zeus.

The throne and framework were made of wood and got destroyed in 426CE or years later in a fire at Constantinople. But earlier, loss or damage was caused by Lucian of Samosata in the later 2nd century. What do you think- is wood is the reason behind this fire incident?

Know more about the most renowned statues in the world. 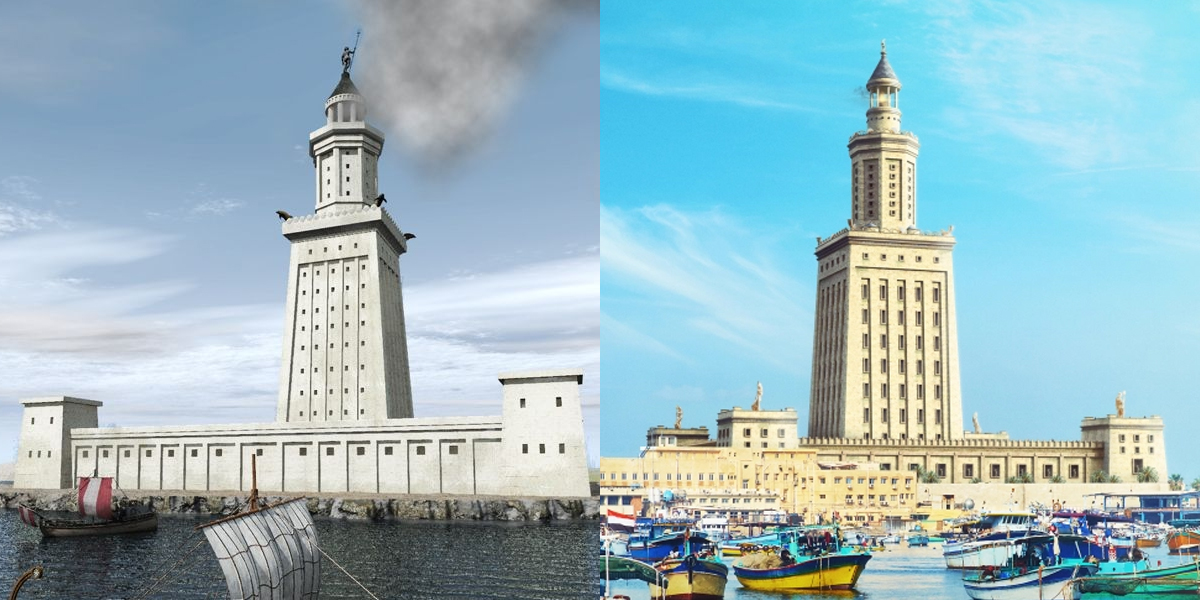 The lighthouse that inspired several future lighthouses was built in 300-280 BCE by Sostratus of Cnidus and is the first lighthouse in the world. The burning fire on top of the structure consists of three levels: a square base, an octagonal level, and a cylindrical top.

The building dismantled between the 12th century and late 15th century and transformed into a fortress by Mamluk sultan Qa it Bay. This 330 ft impressive structure was the third tallest building in the world after the pyramids of Giza. It was in 1994 when the French archaeologist found some remains of the lighthouse on the floor of Alexandria’s Eastern Harbour.

Have you visited any lighthouse from across the world? 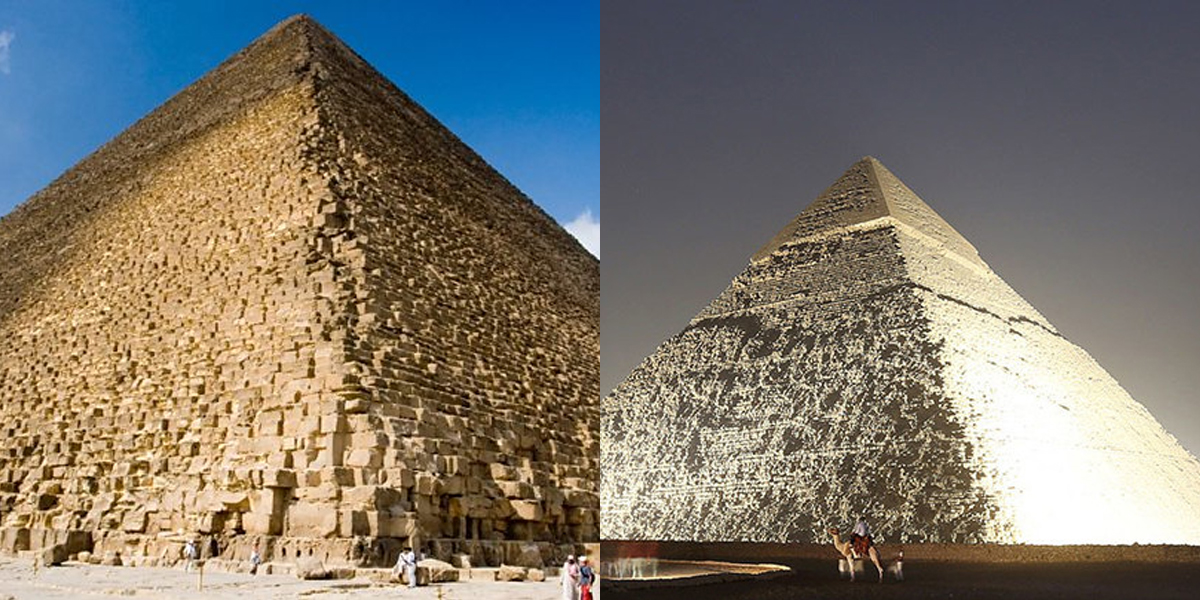 Built over 5000 years ago, the Great Pyramid of Giza is the only wonder of the ancient world that is still existing. The 48 ft tall Great Pyramid in the famous Egyptian city Giza was built on 13 acres as a tomb for the Egyptian pharaoh Khufu in 2560 BCE.

Do you know over 100,000 Egyptians artists lived temporarily in the city while building pyramids? There are three chambers inside the pyramid. Also, this spectacular construction is built out of 2.3million stone blocks which were transported from nearby quarries.

If you are a culture lover, then you can’t miss visiting the only architecture existing from the ancient world. Today, the tourists can enter the pyramid through a tunnel created around AD 820 by Caliph al-Ma'mun. Before you plan to travel to Egypt, know the best time and places to visit during your stay.

7. Temple of Artemis at Ephesus 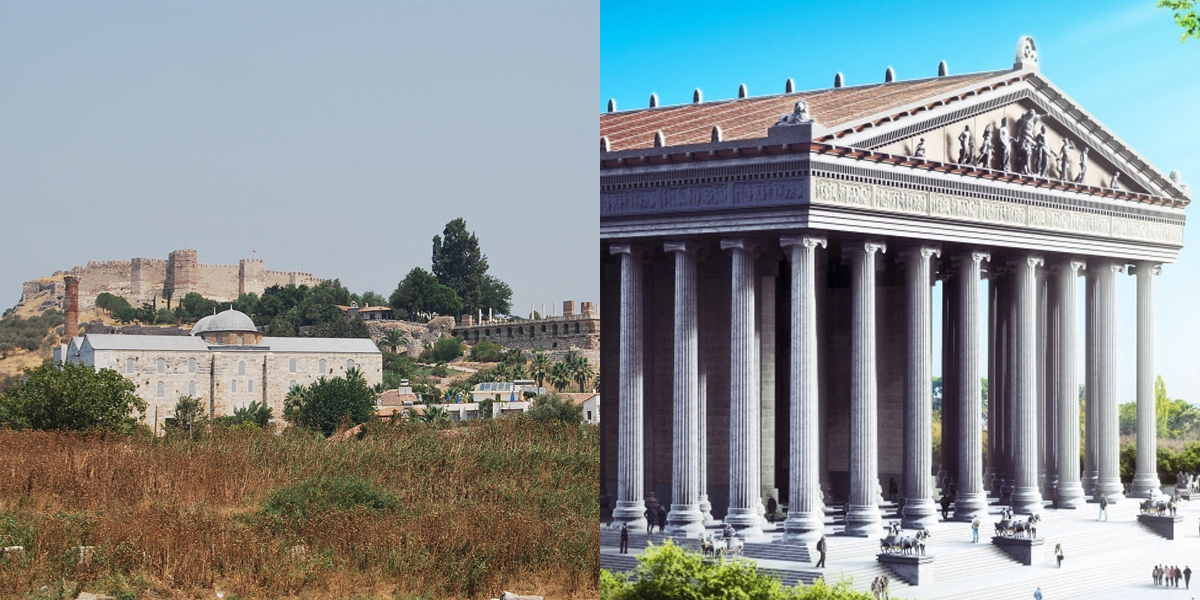 Temple of Artemis at Ephesus was built and destroyed three times. It was first demolished by Herostratus who burnt it to become famous. Then it was destroyed by the Goths who wrecked the city on the run; and finally, a Christian mob tore it apart in 401 CE leaving the single column which can be seen today.

It is also known as the Temple of Diana and the Temple of Artemision. The temple was situated near the ancient city of Ephesus about 75 kilometers south from the modern port city of Izmir in Turkey. Today only the solitary column stands as the symbol of the site.

Traveling is fun. It makes you learn and explore the best things from around the world. Even though you might not have visited the only existing wonder of the ancient world, these artists through their 3D renders have taken us to the journey how they originally looked like.

If you are a culture lover, you will be surprised to know the facts about the seven wonders of the world.

Did you like their creativity? Which ancient wonders’ new look attracted you the most? Drop your comments below.