The Influence of Goths, Goth Clothing & Architecture in Today’s World

In today’s world, both Gothic culture and Gothic fashion are giving a new meaning to the fashion industry. Read about its art and literature here. 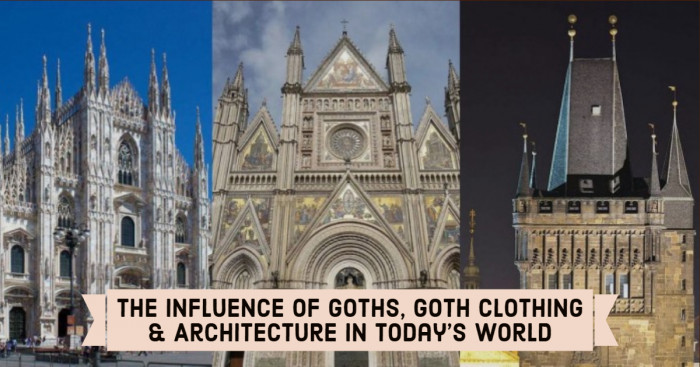 What comes to your mind when you hear the term Goth? Do you imagine someone depressed or violent, or the one who always wears black? Yes, this is the only perception everyone has about Goth subculture. If you are a true music lover, you must be influenced and touched by the music given by the Goths. Some of the popular Goth rock bands are Evanescence and The Sisters of Mercy.

But have you ever wondered from where does this Goth subculture come? The word Goth is derived from the word ‘Gothic’ which means dark or gloomy. The Goth subculture was initiated in the late 1970s and early 1980s when English Goth rock (a musical subgenre of post-punk) gained popularity. The goth subculture is associated with fashion and music. The music preferred by them includes several styles of deathrock, darkwave, post-punk and more. The Goth subculture continues to attract large audience years after its emergence.

People who call themselves belonging to Gothic culture live the meaning of Goth while putting in makeup and dress which represents gloominess or decay. For instance, they wear dark attires (mainly black), use white makeup or use the tones that represent death. Let us know more about the gothic clothing, gothic dress, and their beliefs. 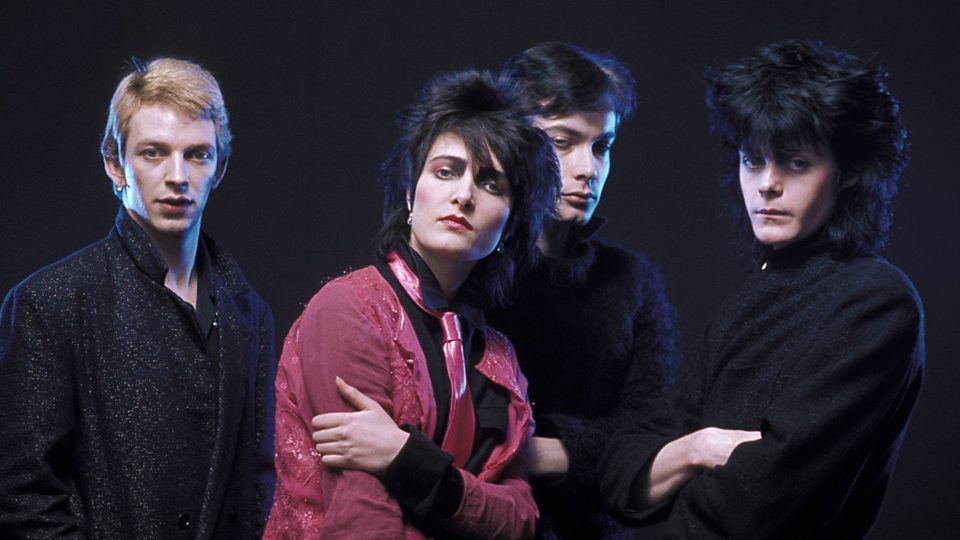 Though the Goth subculture began in England during the 1980s, it has continued to fascinate the audience throughout the world. The term ‘gothic rock’ was first introduced in 1960 by American composer John Stickney to describe his meeting with singer and songwriter Jim Morrison which he referred ‘the perfect room to honor the Gothic rock of the Doors.’

The same year, an American rock band Velvet Underground with a song ‘All Tomorrow's Parties’ delivered a gothic rock masterpiece according to an American columnist Kurt Loder. Goth rock is recognized for its theatrical sound and hard guitars.

The first song for the Gothic movement was released in 1979 by the English band ‘Bauhaus.’ The song featured doomy piano notes and perfect music for a Halloween party. The word Gothic was later used as an adjective to describe the performance of post-punk bands like Joy Division and Siouxsie and the Banshees. In 1978, critic Nick Kent wrote a review about Siouxsie, describing it as – “parallels and comparisons can now be drawn with gothic rock architects like the Doors and, certainly, early Velvet Underground."

Due to the influence that these rocking bands had on Gothic subculture, the grandfather and grandmother of the Gothic movement are called Siouxsie Sioux (lead singer of Banshees and Siouxsie) and Peter Murphy (singer of Bauhaus). The Goth subculture of 1980 took inspiration from several sources. It may include inspiration from horror films and Gothic literature, science fiction films and traditional mythology.

Overall, the Goth subculture can be described as the gothic literature, medieval history, and horror cinematography. It is also considered one of the weirdest cultures from across the world; Goth people take pride in being unique from normal culture and wear dark clothes to look different from regular standards.

Gothic Fashion – A Style Remembered For Mysterious and Homogeneous Features 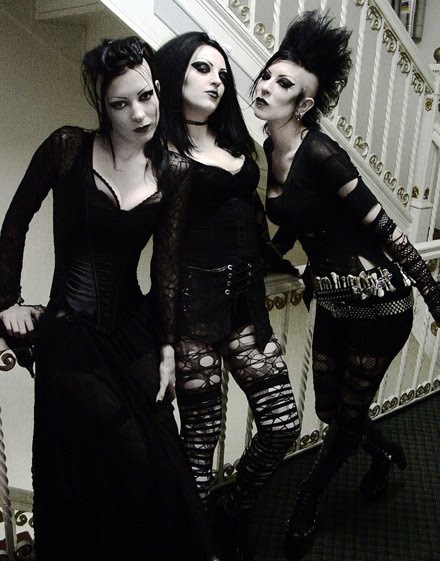 While you may find black as a party color, Gothic people usually wear black to represent death and gloominess. Gothic clothing style is borrowed from the Victorians and the punk fashion. It is often characterized by black clothing. Gothic people wear gloves, lace, tight corsets, leather-shaded with scarlet. They do dark makeup which includes black dyed hair, dark eyeliner, and black lips.

To put it in simple words, black is their favorite color. It is distinguished by smokey makeup and black period style clothing.

The Gothic clothing can be divided into two periods: The first period (1200-1350) and the second period (1350-1450). The Gothic dress for the first period was graceful and sophisticated. The dresses were long, and the necklines were deep. The sleeves in the dresses used to be tight.

The Gothic clothing style changed in the second period. The dresses designed in the later period include leg-o-mutton sleeves, tight belts, and crisp pleats. 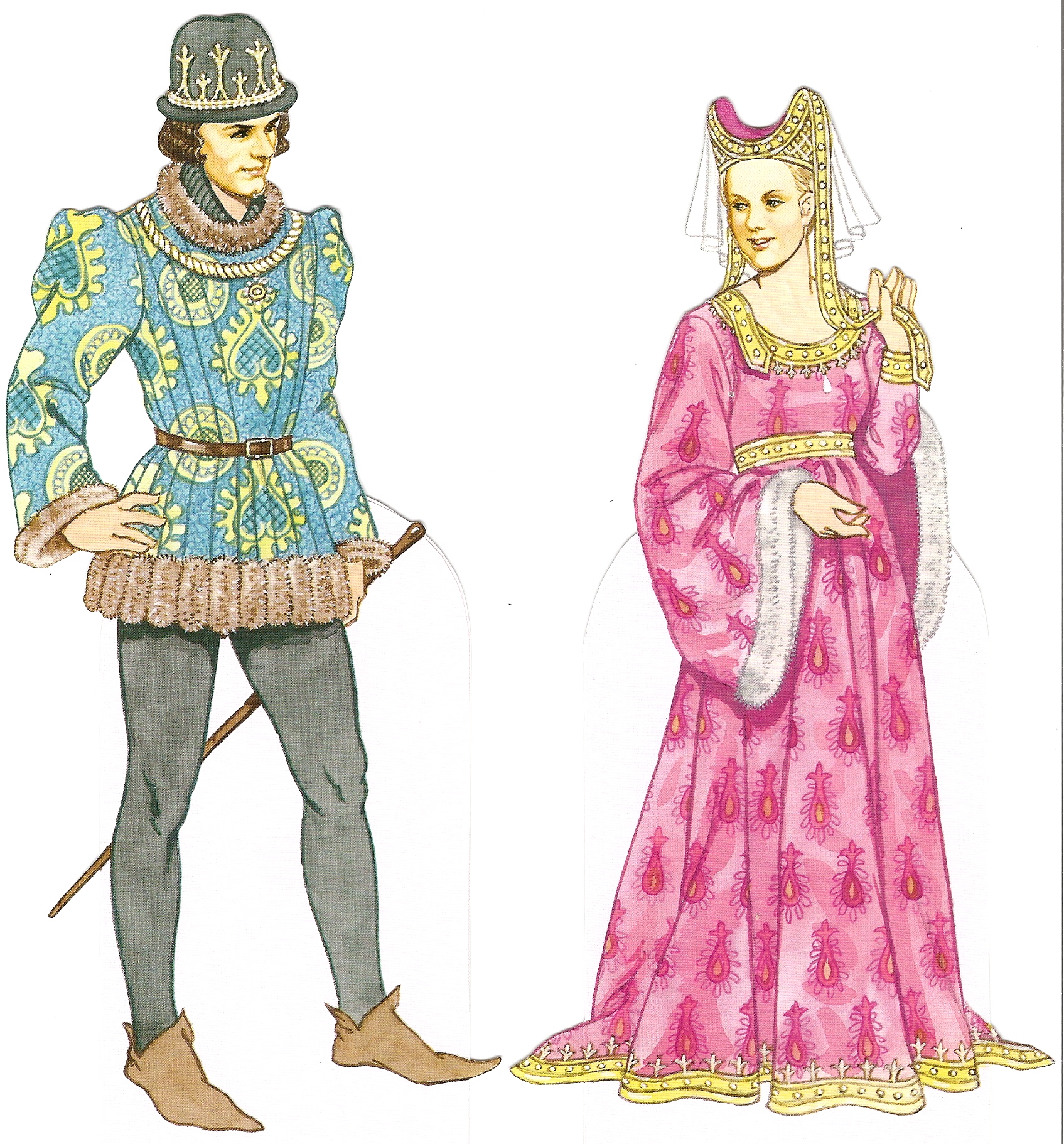 Gothic corset shapes the body of a girl like an hourglass. The corset was popular during the medieval ages. Today in the 21st century also, the corset is worn by girls, as the hourglass shape of a girl sounds flattering and cool. Earlier, it was very uncomfortable to wear. But with the time, the corset became soft and came in several designs. Other accessories like fishnets are temperature friendly. They can be worn on legs, hands and even as jumpers.

In the early period, male Goths bleached their hair as blonde hair was much popular at that time. Even few men wore beards. Goth girls in both the periods kept their hair loose, flowing upon their shoulders. After the marriage, they used to keep a bun at the nape.

You can use other hair accessories and can also opt multi-colored hair but, black would give you the real look of the Goths. 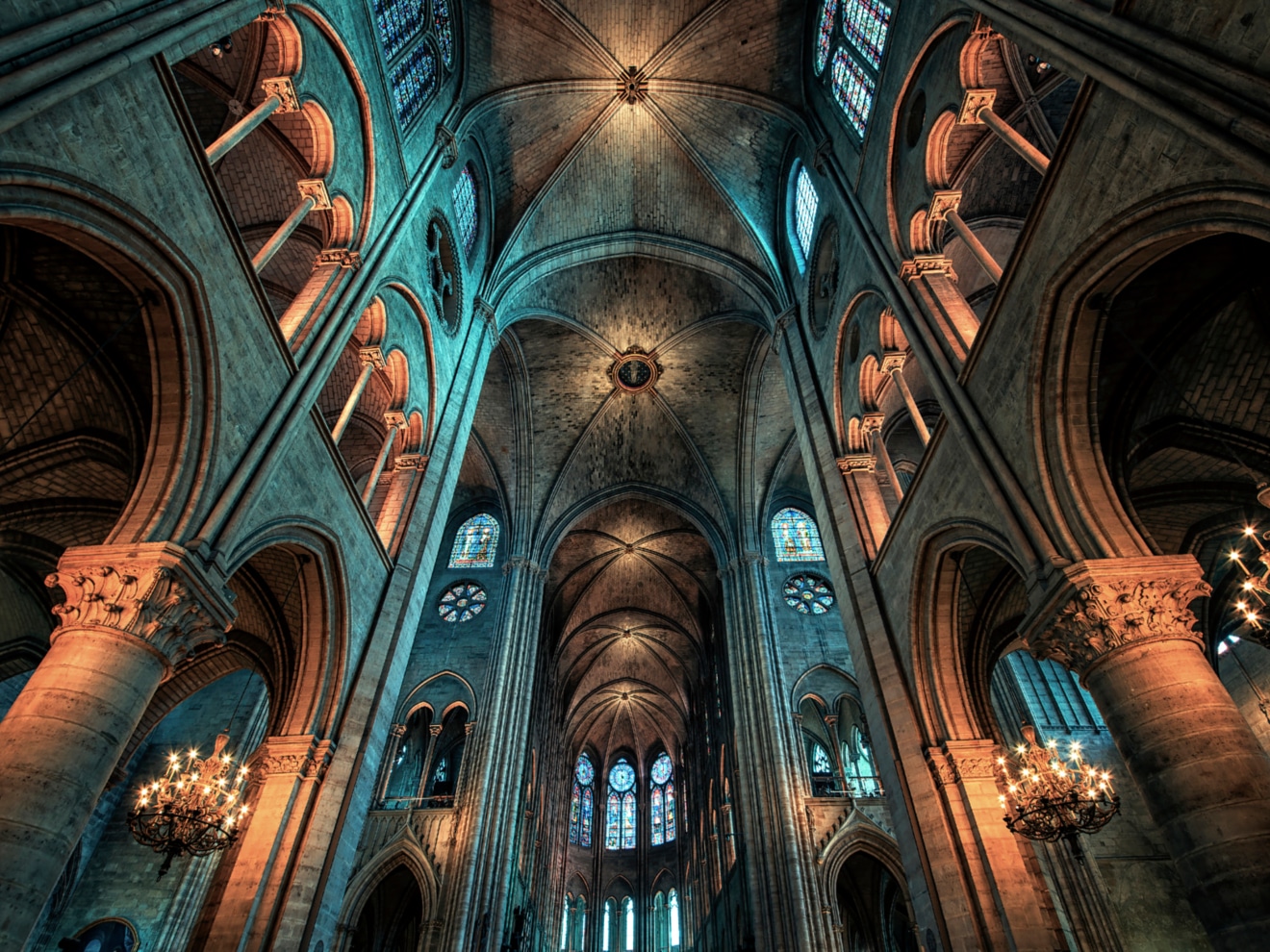 Gothic art, architecture, and sculpture are the characteristics of the two great eras that developed in Central and Western Europe during the Middle Ages. It spread to all Southern and Central Europe without affecting other classical styles in Italy. Primarily, the Gothic period included stained glass, illuminated manuscripts, sculpture, and panel paintings which were popular in middle age. The earliest Gothic art was the sculpture on the walls of abbeys. This Gothic style then rapidly spread as monumental and took different forms. A large proportion of the Gothic art produced was religious.

Originating in the 12th century, the Gothic architecture was popularly used for churches until the 16th century. It prominently included the flying buttress and rib vault. Another important feature was the use of the rose window, and stained glass to bring natural light to the interior. All these technologies existed in the Romanesque architecture, but they were used in more creative ways in Gothic architecture make the structure stronger. The first popular example is the Abbey of Saint-Denis whose façade was designed with the Gothic features. This style is also seen in civic architecture in university buildings and halls. 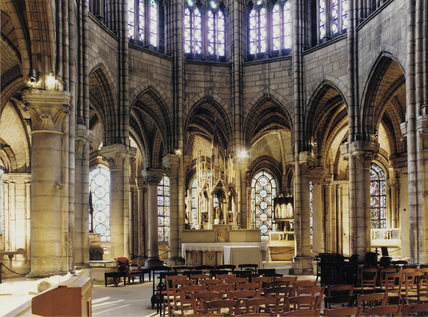 Earlier, Gothic-style architecture was known as ‘Opus Francigenum’ which translates to French work. An Italian Giorgio Vasari used the term barbarous German style in his ‘1550 Lives of the Artists’ to explain what is known as the Gothic style. He explained several features to the Goths and held them responsible for destroying the ancient buildings and constructing new ones in this style.

An important feature of the Gothic church is height and width. The major section of the Gothic church shows the nave (central part of the church) taller than its normal usual. Many Romanesque churches had round windows which are called oculi. The interior decorations of cathedrals were painted murals. Many of the stained glass in Gothic cathedrals today have been reconstructed and designed, only a few cathedrals like Bourges and charters have the original windows. (2.1)

It was not until the late 18th century the word Gothic was applied to the literature. It was first mentioned in English writer Horace Walpole’s The Castle of Otranto. His story of supernatural elements and death paved the way for fiction that has been explored by other authors.

1. Location of the Scene (Atmosphere and Setting) 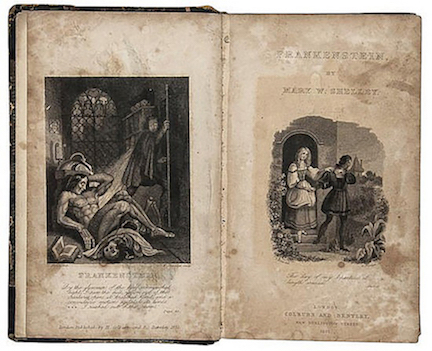 The Gothic authors often used settings like mountain regions, threatening storms and dark forests. For instance, Mary Shelley used the locations like gloomy castles and graveyards to focus on the plot of her 1818 fiction Frankenstein. The novelists outline the location of scene and atmosphere in a way that it directly signals to the fear.

Nightmares are an important sign within Gothic Literature. They were used to describe the haunting aspects of the story. Stephen King’s Bag of Bones describes Mike Noonan, a character depressed by the nightmares of scary vision including the death of his wife. (2.2)

Gothic writers use high emotion to express their thought. This impassioned language helps them to convey a lot more about the characters. Emotional distress and themes of madness were seen in many novels that narrated the condition of psychosis. For instance, Charlotte Perkins Gilman “The Yellow Wallpaper” is written from the imagination of a woman having postpartum depression.

You may find the use of supernatural events like spirits, vampires or unexplainable events in the Gothic novels very common. Such events are used to attract the audience and to make the story more expressive. The best example of this event is Toni Morrison’s Beloved. The plot of the story revolves around a slave Sethe and her daughter whose home is believed to be haunted by a ghost of Sethe’s daughter. 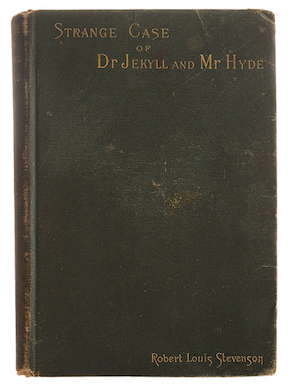 Like other literary genres where villains play the key role, in Gothic literature, villains took the form of male characters in the positions of kings. They can be priests or pundits. Initially, they may show good behavior, however, turning into evil later on. Villains like Mr. Hyde and Dracula are common examples of Gothic literature.

The works of Charles Dickens focused on the romantic-style love affair and also featured villains and other gothic literature elements in the story.

Incorporating the Gothic literature elements in the novel is important to express the essence of the dark genre. The elements were used by many known writers. But particular writing appeals to those readers who can link themselves with the events described in the story. It could also be the reason why Gothic Literature is slowly getting vanished in today’s modern world.

The Gothic subculture is known to have emerged during the early seventies and eighties. The Gothic people are personified for wearing black and dark colors which represent gloominess. Their dark fashion is adopted by several popular artists like Asap Rocky and Kanye West. They are free thinkers and do not accept the rules of the society; instead, they create their own.

Do you like the gothic fashion? If so, would you be wearing those boots with high heels, dark eyeliner, black lipstick, and silver jewelry? Drop your comments below.