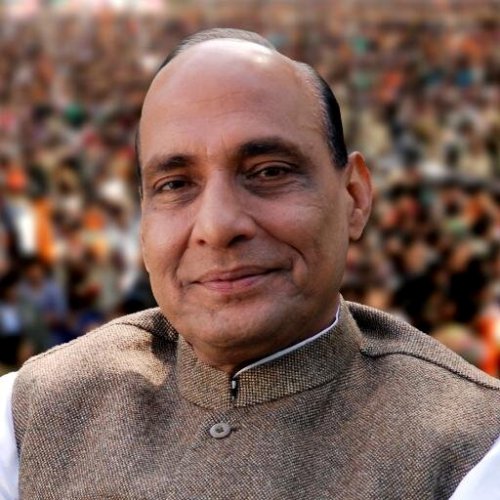 In 1975 he was appointed district president of the Jana Sangh

In 1977 he became M.L.A. from Mirzapur constituency

In 1984 became the State President of the BJP Youth Wing

In 1988 became the National President of the BJP Youth Wing

In 1988 became a member of the Uttar Pradesh Legislative Council

In 1991 became Education Minister in the Uttar Pradesh Government

In 1994 became a member of the Rajya Sabha

In 2002 became the National General Secretary of BJP

became the National President of BJP

In May 2009 he was elected M.P. from Ghaziabad in Uttar Pradesh

In May 2014 he was elected M.P. from Lucknow in Uttar Pradesh

became Union Minister for Home Affairs in the Government of India.

4. Since he was 13 years old, he is associated with the Rashtriya Swayamsevak Sangh.

5. On Ram Temple issue, Rajnath Singh follows “No Compromise” policy. Whenever the issue of Ayodhya Controversy is raised, he is the man with strong beliefs.

6. He strongly condemns the use of the English language. He believes that this may attract youngsters towards western culture, and they might forget their own culture.

When he was the National President of BJYM, he wrote a book Unemployment, its Reasons & Remedies.

1. In the year 1998, he was the state president BJP; it was considered as the best performance of BJP in the Lok Sabha, achieving 58 seats & 2 allies.

2. BJP became the 1st political party to give 33% posts to women in party organizational structure during his administration.