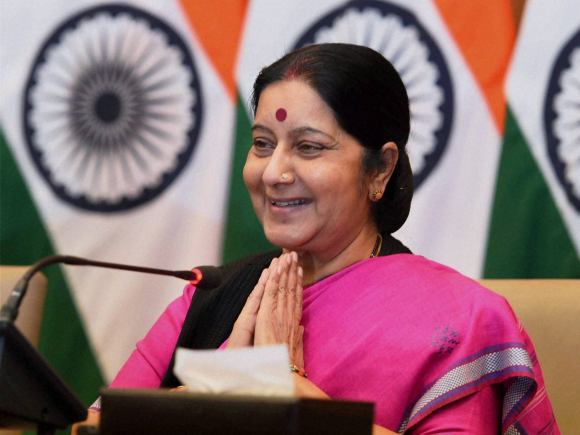 Later she became a national leader of BJP

she became the first female chief minister of Delhi

She was the Union Cabinet Minister for Information and Broadcasting

a position she held from September 2000 until January 2003

She became the Minister of Health

Family Welfare and Parliamentary Affairs from January 2003 until May 2004

Swaraj has been serving as the Indian External Affairs Minister under Prime Minister Narendra Modi since May 2014.

1. In the early 1970s, while Sushma Swaraj was studying at Panjab University, she had joined the Akhil Bharatiya Vidyarthi Parishad (ABVP) – the student wing of the Rashtriya Swayamsevak Sangh (RSS), Chandigarh. Her father Swaraj Hardev Sharma was also an RSS member.

2. When Finance Minister Arun Jaitley had contested for the post of President of the Delhi University (DU) Students’ Union, Sushma Swaraj campaigned for him.

3. Sushma was the youngest Cabinet Minister of a state at the age of 25 after joining the Janata Party. She became the only female MP of Parliament to receive the ‘Outstanding Parliamentarian Award’ for her contribution to Indian politics till date.

4. Husband of Sushma Swaraj Swaraj Kaushal and she were adjudged as the youngest ever achievers till date in their respective fields in the country by the Limca Book of Records.

5. In 1973, she started practicing as an advocate in the Supreme Court of India. And, she became the first woman chief minister of the state of Delhi.