5 Movie Stunts That Looked Crazier And Horrifying Behind The Scenes

To be clear, there are some actors who are brave enough to do their stunts own. Right from Keaton to Cruise you have watched several actors performing horrifying stunts in their movies. But how they are actually performed? 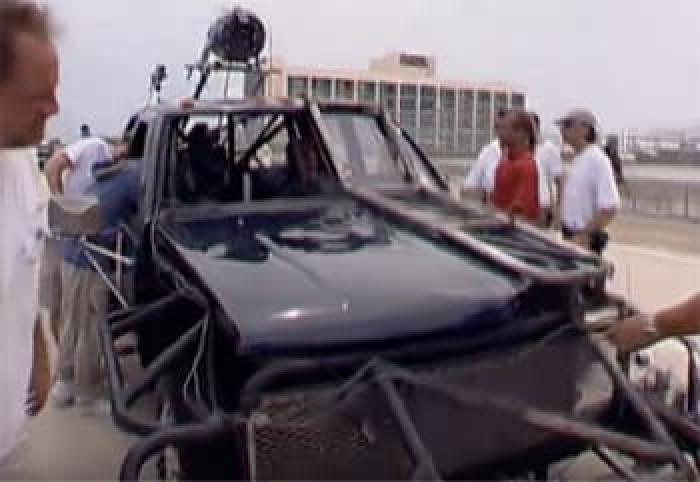 Whether it’s a car chase, a kung fu fight or anything there is a number of film sequences that wouldn’t have been possible to pass without a stuntman.  You won’t disagree that men and women who perform stunts or become a body double have one of the most happening and yet the dangerous jobs in the film industry.

When you see a really crazy shot in a movie, you just wonder how this shot would have done and how the actor is seen hanging on the wire, or anything. You actually crave to see BTS of the movie.

Nowadays, it has actually become difficult to impress the viewers as everyone now thinks that it was all done by some partner of a computer or via technology. Let's’ check out some insane movie stunts those are crazier and horrifying behind the scenes.

Do you remember the movie ‘The Bourne Ultimatum’ where highly trained Jason Bourne suffers from amnesia, tracks down a CIA official while retaining memories of a forgotten past? If you have watched the film you must have remembered the scene when Jason Bourne jumps off a building into another building via a window. Have you ever wondered how the team and a camera crane move so fluently? Actually, the shot is not easy as you are thinking, see what had happened when they were shooting for the scene. The team tied up the cameraman and let him jump off a building.

2. When The Actors Had Their Bodies Rigged With Explosives

There is no car accident and people flying off cliffs are seen in every movie. In fact, there are some movies where tons of people get shot by the villains. And if you watch it seriously, you would notice that gunshots are too good not to think as off fake. Can you just guess how did the makers do and even without hurting the stars? The answer is straight, their bodies are covered with explosive charges.

You must have watched a scene when Michael Corleone shoots a couple of guys in the head.  You might not know but each of these slayings requires different effect. Sterling Hayden, has explosive rig hooked up to his forehead, that was completely filled with fake blood and was covered in latex to make it invisible. Here you can watch how it looks… 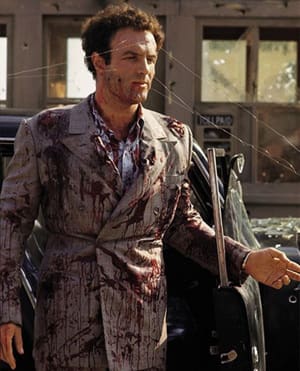 Another actor who did it with full efforts is James Caan. He played as Sonny Corleone who gets killed in the film by bullets. Behind the scenes, he was covered in explosive squibs. The squibs were made from brass and were completely filled with gunpowder. So his death scene involved him getting continuous punched all over his torso.

If you have watched ‘Ghost Rider: Spirit of Vengeance’ you must have known how hard the team works to make the scenes look like they are real. But the film when played we were literally convinced that it would have broken all records.

Just look at this shot, when the actor jumps off a cliff, and the co-director also pick a camera and jump off the cliff.

Sometimes they have to shoot, on the open highway on roller blades.

4. And The Shooting Without A Helmet 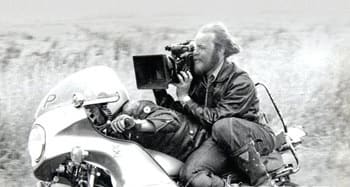 Have you ever wonder how the director manages to shoot the actors while driving at a speed of more than 100 kmph? The answer is there are several things to be managed.

•    The cameraman doesn’t wear a helmet as it would be difficult to operate the camera while wearing the helmet.

•    The driver leans as forward as possible, which literally makes him difficult to see where the hell he is driving.

•    Both cameraman and rider are strapped into the same belt.

So these stunts were perfectly bloody scary, somehow directors managed to pull them off and entertain us on big screens. Hat’s off to the directors and stuntman who forget about their lives and make efforts to fascinate the audience. (6.1)

5. And The Alarming Car Accidents 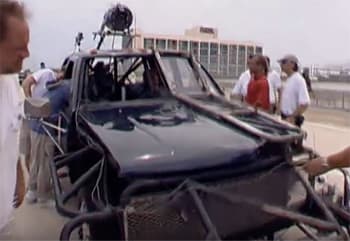 Michael Bay a popular filmmaker is often known for producing and directing big-budget action films which are characterized by special effects and visuals. He is well known for delivering the best action scenes but how does he do that? Why Michael Bay constantly risk the lives of his team members through stunts like this.

This car seriously looks like it has gone through many severe damages on its way. Actually, the car was outfitted with the camera all over and was hanging off the side. The arrangements are set up in such a way that it looks like a cameraman has been killed while shooting the scene.

Thankfully, this is not the case. The stars stay safely out of the vehicles, only the crew member and operators risk their lives.