#DMXChallenge is Challenging You to Make Video with Different Hairstyles

A new challenge is out & this time, it is not challenging you to post pictures through any app, but to make a video of different personalities. DMX Challenge is going viral. 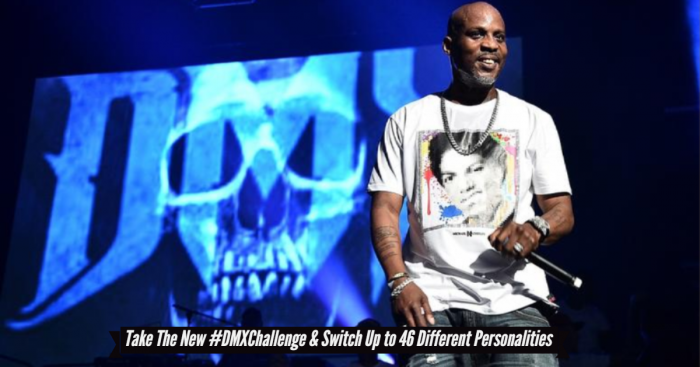 If you have enjoyed participating in several challenges like #BottleCapChallenge or #TrashtagChallenge, which were trending on the internet, here is news for you. A new challenge, i.e., DMX Challenge is out, and is attracting social media users very much.

Now stop posting pictures for #10YearChallenge and #FaceAppChallenge, and try your hands on DMX Challenge that challenges you to make a video of different looks to match up with the girls' names in the song ‘What They Really Want.’

The rapper DMX, whose real name is Earl Simmons, was popular in the early 2000s but would soon come with the track with what Juicy J is calling the ‘Three 6 Mafia Reunion Tour’. Today he is getting searched for his 1991 hit, ‘What They Want’ which featured Sisqo. The song, which was released nine years ago, peaked at No.49 on the Billboard Hot 100 at the time, the song is searched again for the DMX Challenge. He does a roll call of the women he had flings with, and he listed them by name.

Earl Simmons or professionally known as DMX began rapping in the 1990s and released his debut album ‘It’s Dark and Hell is Hot’ in 1998. His first album sold 251,000 copies within its first week of release. And Then There Was X in 1999 which included his hit single ‘Party Up (Up In Here). It was his third album to debut at number one on the Billboard 200.

What You Have to Do in DMX Challenge?

The users have to make a video of their different looks that should match up with the girls’ name in ‘What They Really Want.’ Here is the list of the names in the second verse.

Whether short hair or a colorful wig, there are multiple hairstyles to match with these ladies.

His Relationships and The Truth Behind 15 Children

Earl welcomed his 15th child in 2016. He has four children from his ex-wife Tashera Simmons and ten kids from relationships outside their union. He has this recent child named Exodus with GF named Desiree Lindstrom.

Do you know DMX has bipolar disorder? He even openly spoke about his addiction to crack cocaine, which he began after smoking a marijuana cigarette laced with the drug.

Twitterati from Around the World are Participating in DMX Challenge

Participants from around the world are making their video and uploading on social media. Some are posing with different hairstyles; others are showing different makeup looks.

you can’t tell me this challenge wasn’t made for me #dmxchallenge pic.twitter.com/buutwGCddT

#dmxchallenge I change it up so often I had to! pic.twitter.com/gmrNvzXo28

Even Guys are Finding it Fun to Pose for the Video!

See the Reactions of Twitterati

The DMX Challenge is attracting the netizens and particularly Earl lovers very much. While some are excited posing for the video, others are disappointed to discover that it had nothing to do with freestyle rapping.

A few reactions took a turn after they heard of all the women listed in the song. Perhaps, DMX wasn’t listed several women, but only one lady showing her different personalities. Some even pointed out the dark side to this black girl magic, as a few commenters said that we are living in the age of facial recognition software.

Black women haven’t let me down yet. The #dmxchallenge is gold.

Someone needs to put together a variety show with this type of content.

I thought people were about to be freestyling over DMX’s songs ???? #dmxchallenge

#dmxchallenge is literally just showing off how versatile & gorgeous black women are ugh I love it. pic.twitter.com/vDOh6K0GAQ

#dmxchallenge Maybe he was tryna tell us a long time ago one chick is really 7 different crazy MF’s in 1???? pic.twitter.com/mozw6IsIvS

#dmxchallenge so r y'all goin to ur computers, opening imovie or some app, pulling a bunch of old vids of urself where u look different, and then editing all the vids to transition with the DMX song? Is that how much effort is going in to this? If so, I'm hiring a vid editor, hmu

Who ever thought DMX would trend in 2019 ? Won’t the lord do it #dmxchallenge pic.twitter.com/4SXt5uQZE9

Me getting potential new hairstyle ideas from the #dmxchallenge pic.twitter.com/0FHVRHcxhF

The Challenge is Also Taken Up by Instagrammers

“A few reactions took a new philosophical take on hearing all the women listed in “What They Really Want” after seeing all the quick cut videos. Perhaps, DMX wasn’t listed numerous women, but one lady and all her different personalities. What the #DMXChallenge can confirm, however, is that a lot people have a lot of selfie photos and videos saved on their phone.”

In 2017, Earl Simmons was arrested and charged with tax fraud. He even paid the court over $2.3 million in restitution and was sentenced for a year to jail. He was released from the Gilmer Federal Correctional Institution on 24th January. After a rough past, DMX is happy that he is receiving positive views from the audience on this challenge.