If you are the one who never uploads any picture or video on Instagram but follows it for getting updates, then get ready to show your other side as this Bottle Cap Challenge is worth trying. 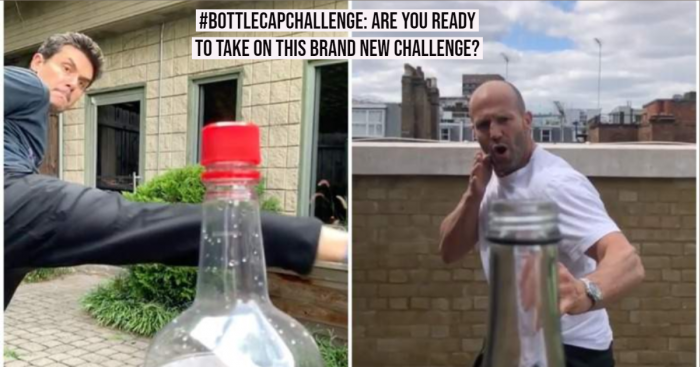 Be it a celeb birthday or a challenge getting viral on the internet, social media is one thing that makes everything popular for no reason. Over the years, people have been trying to do several things to become popular overnight. Earlier, a man from Arizona started a #trashtag challenge to make people aware of how to keep the environment clean. Several people from around the world participated in the challenge and posted their pictures on social media cleaning the trash.

Following the popular #bluewhalechallenge where teenagers were targeted to commit suicide, #10yearchallenge came in the trend and became the latest obsession. People posted their ten years before and after pictures from 2009-2019 and shared on social platforms like Instagram and Facebook.

If you are a social media user, you must be aware of #IceBucketChallenge that was started in June 2014. Hashtags such as #ThrowbackSaturday #weekendvibes #icebucketchallenge #viralchallenge trended over the internet and attracted millions.

Recently, have you seen anyone started kicking bottles randomly? If yes, they have participated in the latest challenge that is going viral. Do you know what it is? It is the #Bottle Cap Challenge.

The challenge was started by Taekwondo champion Fabri Devletchin who then entered into the world of Mixed Martial Arts (MMA). The challenge is to twist the cap of the bottle may be of vodka, wine, or water, without knocking the bottle over.

Before you start the challenge, make sure that the cap is slightly loose, but still onto the bottle. After you complete the challenge, the video is edited in slow-motion to show how hard you tried.

Several celebrities and professionals completed the challenge after being tagged by John Mayer, Guy Ritchie, and Conor McGregor. They posted the video on their Instagram and Twitter accounts.

@jasonstatham don’t worry Jay, there’s more. You should try it without the Kung fu face. I nominate the 4 below. #bottlecapchallenge @willsmith @davidbeckham @menamassoud @naomigscott

Be curious my friends! #challengeaccepted #bottlecapchallenge Passing this on to our guy @JohnMayer …. hey John if you can’t complete this challenge @erlsn and I decided you have to come to Hawaii after your tour and kick it with us until you complete it! ???????????? ????????? ???? pic.twitter.com/gLWn0dpOzV

Since then, every random person is accepting the challenge and is posting the video on social networks. The popular fighter Max Holloway challenged his son for the Bottle Cap Challenge, and he nailed it.

What Do You Think About this Kick? LOL!

This One is Hilarious! At Least She Tried.

my mom just sent me a video of her trying the #bottlecapchallenge and I'm crying pic.twitter.com/FtiCsAe9yJ

My mate from work doing the bottle cap challenge properly ????????

Woah! How Easily She Did This.

Can anyone ask whether she is going to upload a tutorial too?

The #BottleCapChallenge is easy. Do the rotating kick to the top of a bottle cap while twisting it in the process. Sounds simple? It is not. I have proof. Many people who tried this challenge ended up breaking the bottle and hurting themselves.

Haha! What Was That?

I Think She Needs More Training. But This Was Also Not Bad.

This Was to the Point.

I Guess She is a Trained Martial Artist.

Even though you are not a trained martial art player, here are some martial art styles that you should know for self-defense.

He Challenged Barack Obama (I hope he would accept his challenge!)

Since no one requested me to do this (@johnmayer ) and also since no one thinks I'm good at anything except pushing button on stage .. here is evidence that I also do karate. I challenge Prince Harry and Meghan Markle, Kevin Durant and Obama @sussexroyal @easymoneysniper @barackobama #bottlecapchallenge

You All Were Doing Wrong! This is the Way How the Cap Should be Opened

Apart from Hollywood actors, B-town star Akshay Kumar never stays behind when it comes to showing the stunts. He couldn't resist himself participating in the trending #BottleCapChallenge and posted his video on his channel. Akshay considers Statham as his action hero & tried this challenge, and as expected, he did this challenge so well.

I couldn't resist ???? #BottleCapChallenge Inspired by my action idol @JasonStatham, I will repost/retweet the Best I see, come on Guys and Girls get your Bottle out and your Legs in the Air, Let's Do This ???????? #FitIndia #WednesdayMotivation

To be honest, the internet has become a crucial part of everyone's life. Can you imagine spending an hour without touching your mobile phone? Of course not, the internet and smartphones are distracting everyone, but yes, they have become a strong medium to connect with someone.

As more and more people are watching the videos, they are tagging each other to unscrew the bottle using a roundhouse kick. The #bottlecapchallenge is not raising awareness for any cause, but it is more likely a fun way to call each other out for harmless fun and to show their martial art skills.

After the dangerous #bluewhale and #tidepodchallenge, this new challenge is less risky and a great entertainer.

If you are a TikTok lover and love posting videos, here are amazing Tik Tok challenges that you should try to increase followers. Summer is here, but #icebucketchallenge has become old. It doesn’t matter accepting challenge is always fun.

So, are you ready to try #bottlecapchalenge and show your kicking talent to the whole world? Have you ever participated in any of these challenges?  If not, what are you waiting for?

Try these different challenges and gear up yourself for more amazing challenges coming in the future. Who knows there could be a new challenge making headlines in tomorrow’s newspaper.

When are you planning to do #bottlecapchallenge? Drop your comments below and don’t forget to post the slow-motion video on social networks.