Love burgers? If you do, then you should taste these delicious burgers from around the world. Have you ever tried the Frita or Fleur burger?

When it comes to food, not everyone shares a common taste. However, you can find the majority of people enjoying burgers and french fries. Burgers are not a patty on the grill, but more than something you can ever imagine. It’s been a long time since burgers were a barbeque staple or fast food.

Today, you can find several innovative burger recipes with fancy additions in restaurants and cafes. Whether it is a burger or anything spicy on the grill, we love them all. However, several strange foods are there that even foodies wouldn’t want to taste ever.

A burger is considered a sandwich and consists of cooked patties of ground meat placed inside a bread roll or bun. The patty can be fried, grilled, or smoked and is served with tomato, onion, and condiments like special sauce, mayonnaise, and variations of island dressing. Burgers are sold in restaurants and diners. You can find different International and regional versions of burgers everywhere. 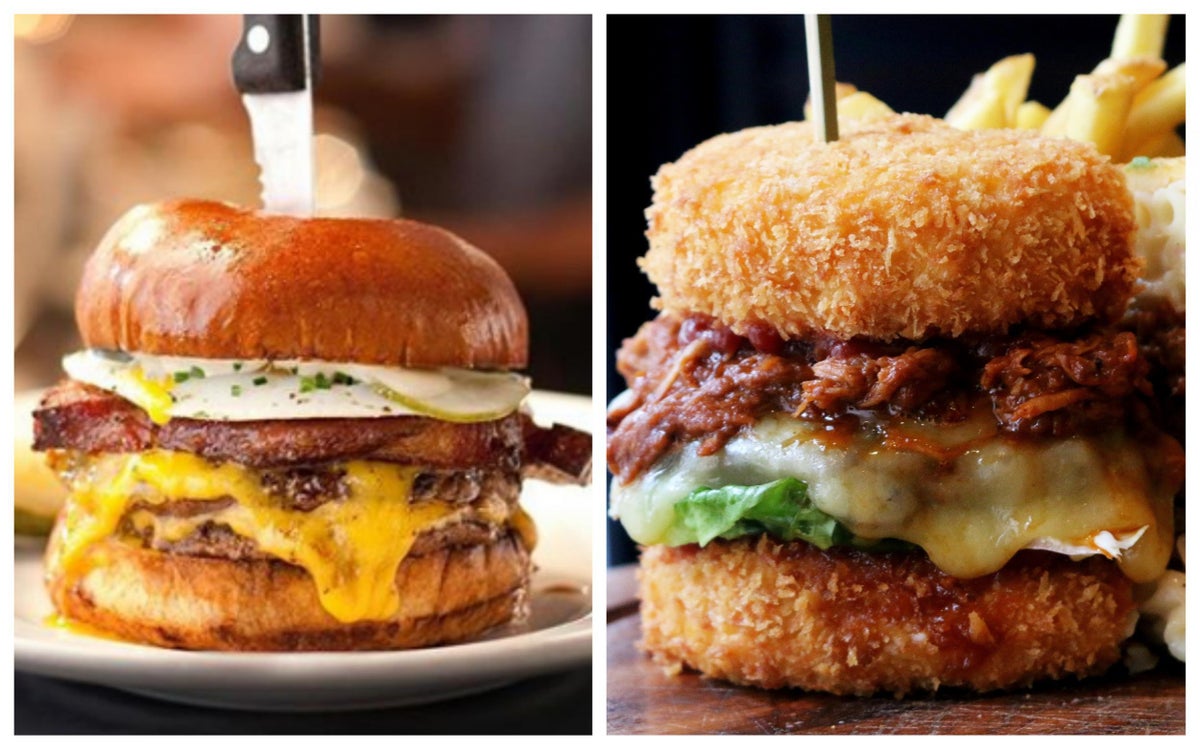 The popular book The Art of Cookery Made Plain and Easy by Hannah Glasse included a Hamburger sausage recipe that suggested serving it with roasted, toasted bread under it. A similar snack was popular by the name Rundstuck and was eaten by emigrants on their way to America. Hamburg is reported to be served between two pieces of bread, which began operations in 1847.

The origin of hamburgers is not known, but it is believed that it occurred in the United States and is attributed to either Frank and Charles, Fletcher Davis, or Louis Lassen. However, burgers gained recognition at the 1904 St. Louis World’s Fair when the New York Tribune referred to hamburgers as the "innovation of a food vendor on the pike." Here are other ancient recipes that are still served across the globe.

So, let’s check out a few delicious burgers served in different countries that are also the favorite snacks of everyone. 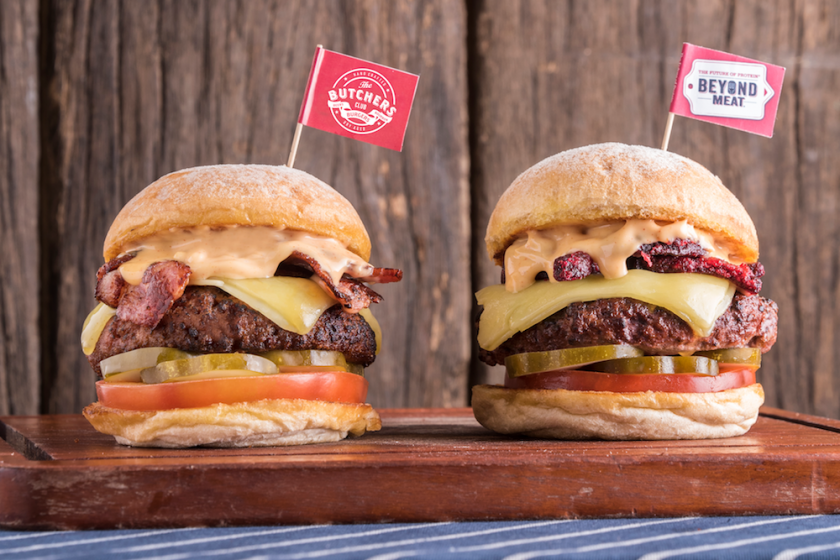 The Brand now consists of The Butcher Club Burger, The Butchers Club Steakhouse, and several restaurants in China. The Butcher’s Club also launched a plant-based burger delivery concept in 2021. Also, the team has partnered with The Impossible Foods, The Veggie club, to debut three plant-based burgers with a range of sides. 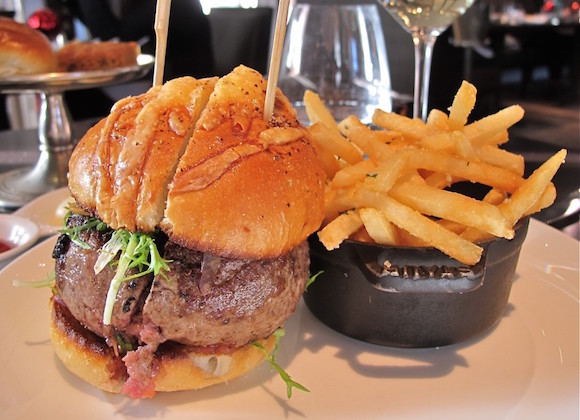 Every burger prepared here is made from special ingredients. Right from homemade pepper to pork belly, everything is seasoned perfectly and tastes delicious in the burger. Besides pork belly, you can also add tomato, cheddar cheese, and arugula to make it yummier. 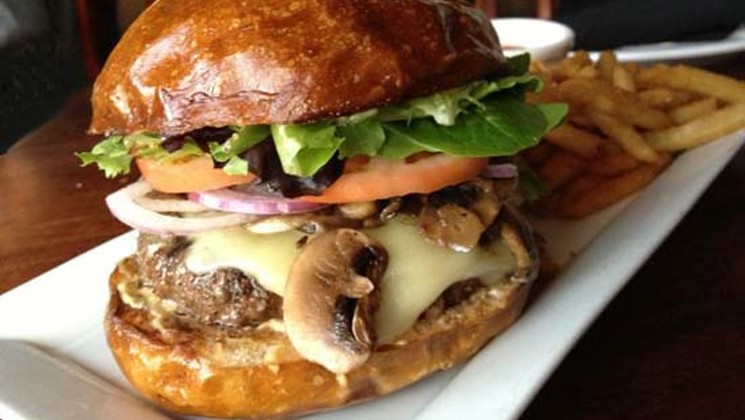 When it comes to food, the Attic burger is one of the most popular foods in Arizona. The Attic is one of the themes of Maroon’s 5’s Payphone, where Adam Levine said,

“I’m at the Attic trying a burger
All of my taste I spent on you
Where have the times gone? Bo Bites, it’s all good
Let’s go and make a reservation for two”. 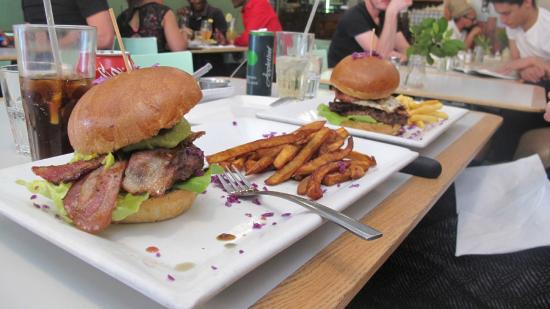 Initially started as a 10 table operation, Royale Eatery is now a three-floor empire that now offers over 50 burgers at its Long Street address. The owner of Royal Eatery said,

“I think the fact that a hamburger can be so versatile means there has to be a variety to suit personal taste.” 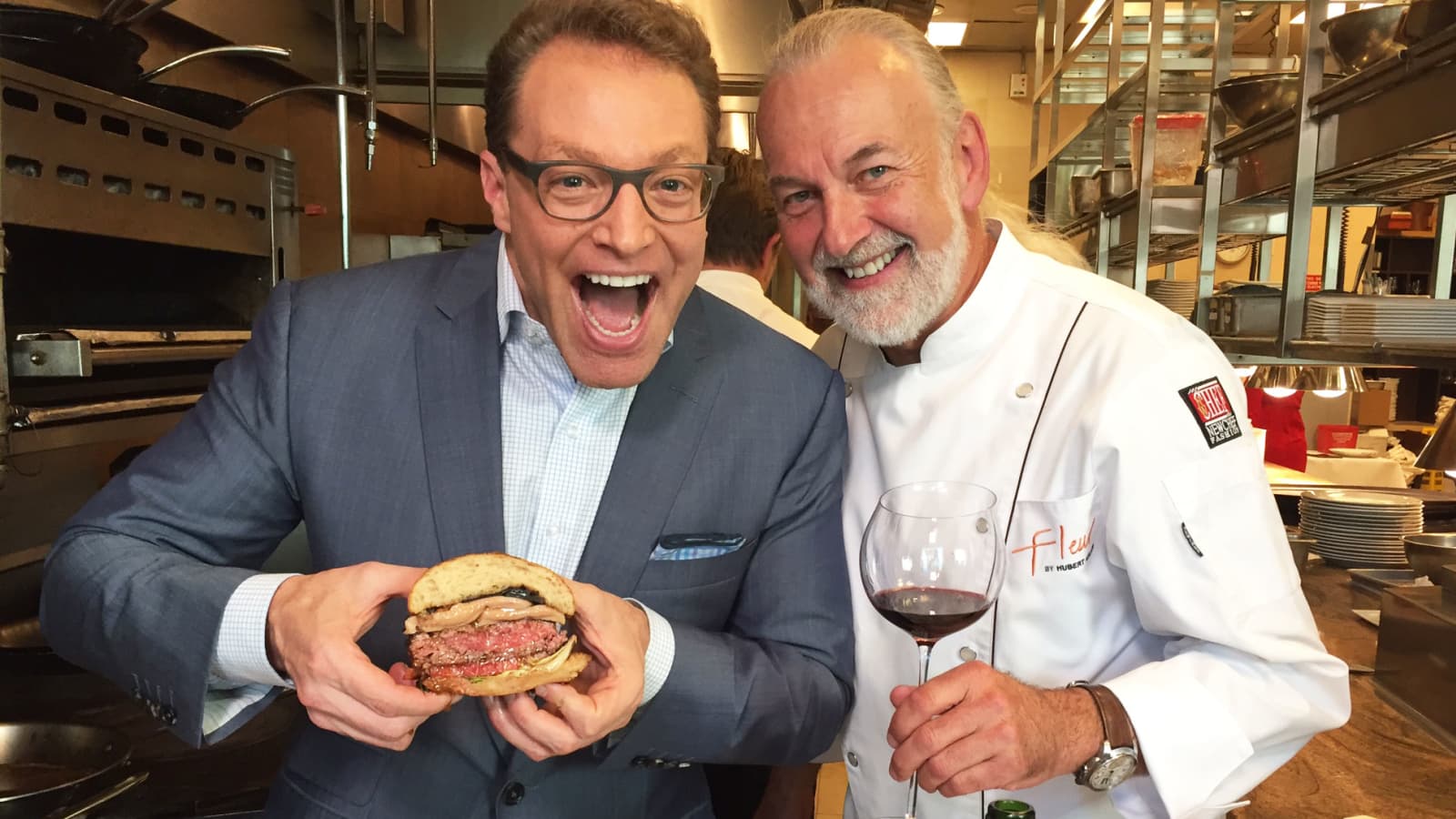 The FleurBurger is one of the world’s best burgers and also the most expensive one. The Fleur burger 5000 consists of a Wagyu beef and foie gras burger patty topped with truffle sauce and shaved black truffles. The burger is served with a bottle of Bordeaux. The wine is served in Ichendorf glasses, which can be taken at home at the end of a meal. 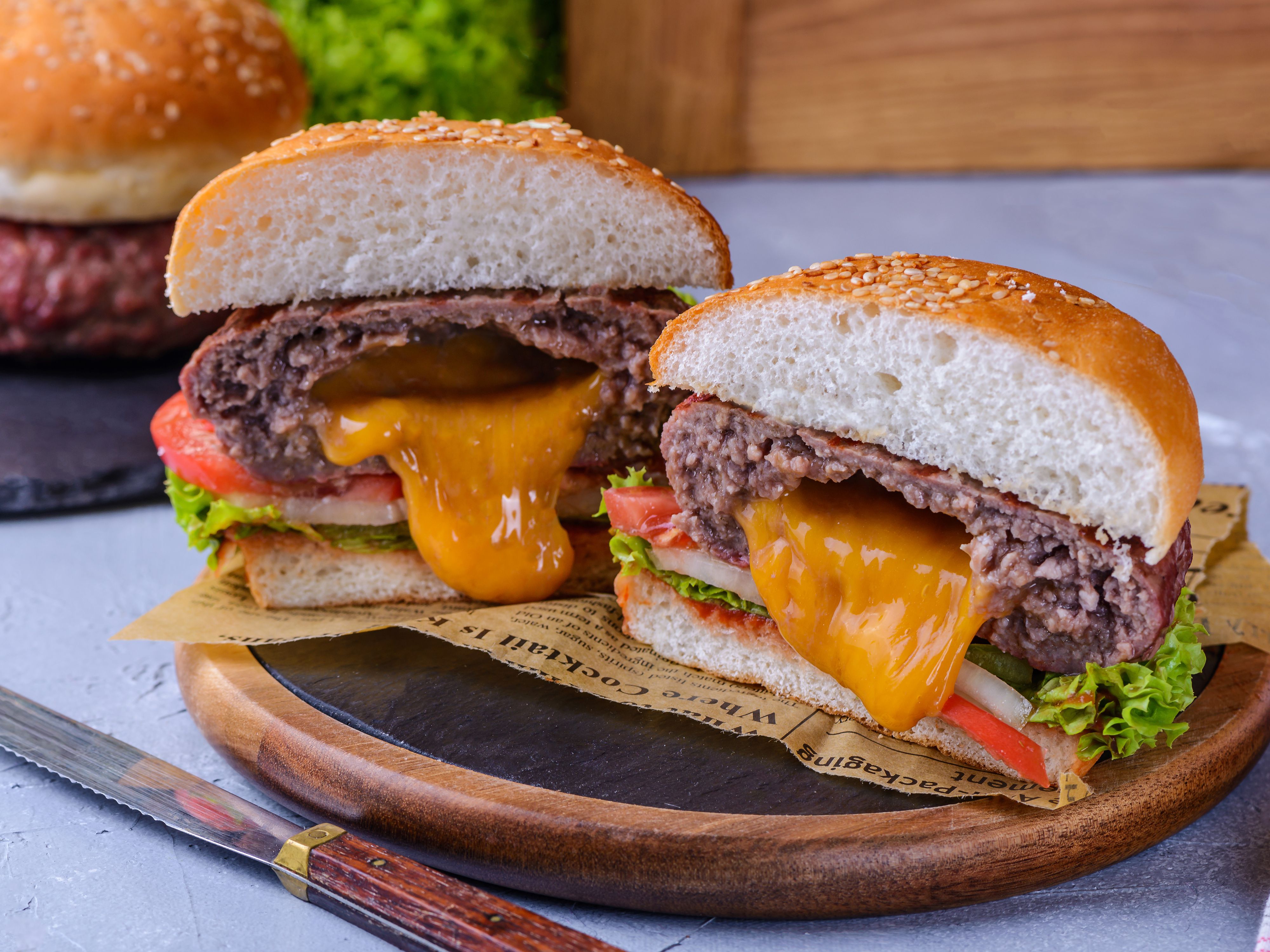 Jucy Lucy packs a cheesy wallop in its patty. It melts in your mouth and gives an exotic flavor. It does not have sliced cheese as a topping, but cheese is rolled into the center of the raw patty as a filling. It is a cheeseburger with cheese inside the meat, resulting in a melted core of cheese. As the burger cooks, the cheese inside melts. It also separates cheese from the bun and gives a different texture to the burger.

It is prepared with garlic salt, black pepper, hamburger puns, American Cheese, and Worcestershire sauce. Two bars in Minneapolis claim that they are the inventor of Jucy Lucy. However, several restaurants have created their version of Jucy Lucy to serve their customers. You can try Jucy Lucy burger at 5-8 club (Minneapolis), Whitmans’s (Newyork), and M.E.A.T Eatery (Boca Raton). 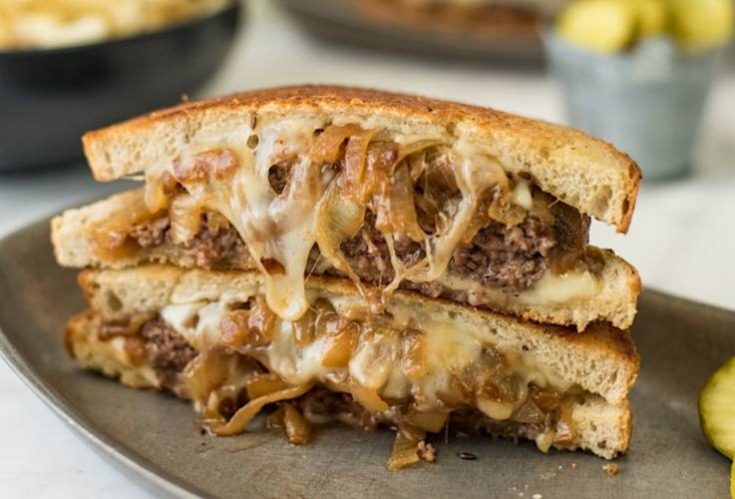 It is a sandwich that consists of a ground beef patty with melted cheese. It is topped with caramelized onions between two slices of bread rye or marbled rye. It is not known when patty was invented, but it is believed that patty served as early as the 1940s. Several experts suggested that patty was invented by a Los Angeles restaurateur between 1930 to 1959.

Besides having a thick stack of patties in the between, Patty melt comes layered in swiss cheese and bacon. Enjoy it with sauteed mushrooms, jalapeno, and relish this unbeatable patty melt. The best places to try Patty Melt are Norma’s Cafe in Dallas, DMK Burger Bar in Chicago, and Jonathan’s in Dallas. 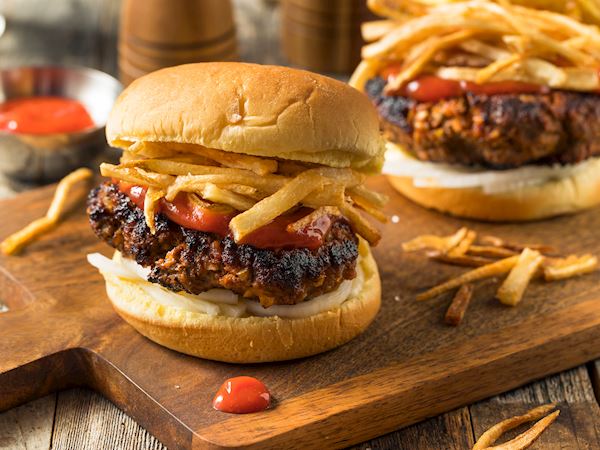 The Frita is a Cuban dish with pork patty and seasoned ground beef. Cuban bread is topped with shoestring potatoes. Variations of the Frita burger include onions, lettuce, and ketchup sauce. A burger is washed with a Cuban puffed wheat milkshake. It is another delicious burger introduced by Cuban immigrants in the 1960s.

The majority of Frita burger versions are prepared with Cuban buns filled with ground pork or beef patty mixed with raw onions and potatoes drizzled with spiced ketchup. If you want to taste this delicious burger, then visit El Rey de las Fritas in Miami and El Mago de Las Fritas in Miami. 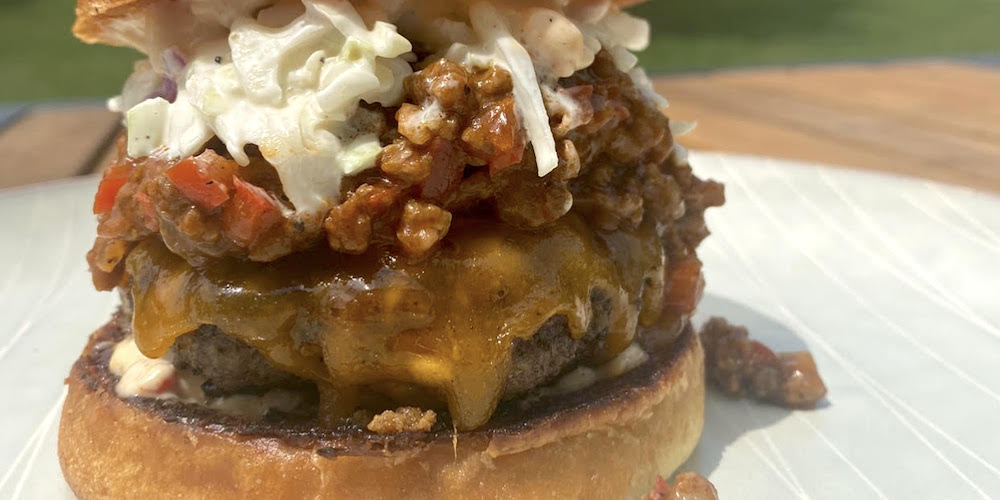 Sloppy Burger is a messy kind of sandwich. It is a cheeseburger topped with chopped onions, fries, and avocado slices. The best way to eat this burger is with a knife, spoon, fork, and napkin. The burger originated in Colorado in 1970 when restaurants in town began serving burgers marinated in a soup made with green chili peppers.

Today, every eatery from Pueblo to Colorado serves their versions of Slopper with different names like Green Giant and Thunder Humper. You can try Sloppy Burger at Gray’s Coors Tavern in Pueblo and Crave Real Burgers in Colorado Springs. This 800-1500 calories burger was named after R&B singer and songwriter, Luther Vandross with legends claiming that he invented it after running out of burger buns and had used donuts as their substitute.

This delicious burger is also known as a Doughnut burger with glazed doughnut placed in the place of a bun. In the United States, the Gateway Grizzlies, a baseball team of Sauget, have served Luther Burger at their ballpark. The burger consists of doughnuts around a Black Angus patty, melted cheese, and two strips of bacon.

Besides revenue, the burger also attracted fans to come to the ballpark. In Astoria, Lebanese burgers began selling a different version of a burger with turkey Bacon in 2010. You can enjoy this delicious Luther Burger at Gourdough’s Public House in Austin and Brooks Gourmet Burgers and Dogs in Florida.

Have you ever tasted these delicious burgers? Do you know other burgers that taste different and should be enjoyed by foodies? Share in the comments section below!