Check out these strange foods from around the world that are rarely served and are prepared from unique ingredients. 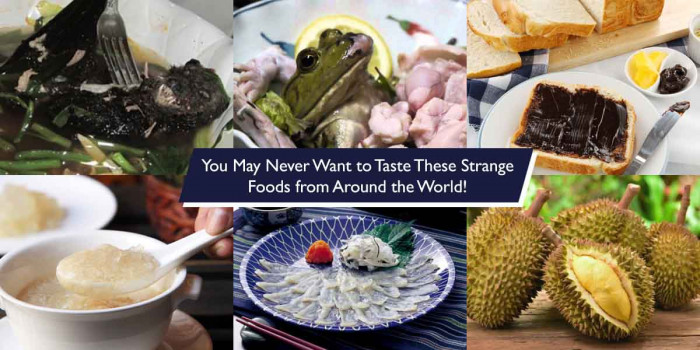 Nothing can beat the experience of exploring different countries and tasting a new dish or its popular cuisine. Traveling not only provides you an opportunity to visit beautiful places but also lets you know about popular places and their traditional food. With every new stamp you receive on the passport, you can expect to see different cultures and traditions. Not to mention, every country or place has different food flavors.

Have you ever heard about Haggis? It is a combination of onions, oatmeal, sheep's heart, liver, and lungs. This strange food is eaten in Scotland. It's time to explore around the world and to delve deeper into the strange foods that are rarely known. 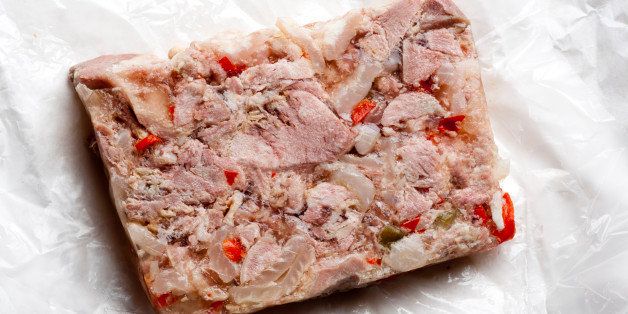 Contrary to the name, head cheese is not made from cheese. It is made by skinning the head of a sheep or cow and removing all organs. Originated in Europe, this dish is eaten cold and at room temperature. Sometimes, the feet and the heart are also added as the ingredients.

You can find variations of head cheese throughout Europe with different ingredients. 45g of head cheese contains 423mg, 14mg potassium, 0g sugar, 0g carbohydrate, and other vitamins and minerals. Europe is not only famous for its breathtaking place but also unique cuisines since the middle ages. It is a regional type of blood sausage and is made from pork blood or beef suet, cereal, or barley groats. It is the oldest form of sausage and has been known as a black pudding for centuries. It can be boiled, baked, or fried in its skin. In parts of north-western England, it was usual to serve black pudding as a complete meal.

It is a great source of protein, low in carbohydrates, and high in iron and zinc. It is sometimes considered a superfood because of its nutritional qualities. In Taiwan, locals love the pig’s cake blood, which is prepared from rice cooked in pork blood. You might have heard about this strange food, but do you know it is the smelliest snack in the world? The durian’s smell is so awful that it is illegal to carry it on public transportation.  Its smell is described as rotten garbage and sewage. It is filled with four seeds that are covered with thick and creamy flesh. In some areas, it is also known as the king of fruits.

This weird fruit is oval and is covered in formidable-looking spikes. It is naturally rich in vitamin C and potassium and improves skin health. It also lowers blood pressure and contains the daily nutritional requirement. Durian flowers are feathery with copious nectar with buttery odor. Durians grow in Southeast Asian countries like Thailand, Indonesia, and other places.

It is fully overloaded with vitamin C, antioxidants, folic acid, vitamin B6, and other minerals. This strange food is native to Thailand but can be found in the Asian markets. It has a smelly flesh that changes with color. You can take Durian fruit as roasted, boiled, and it tastes like ice cream. Here are other worst odors in the world that you should know. 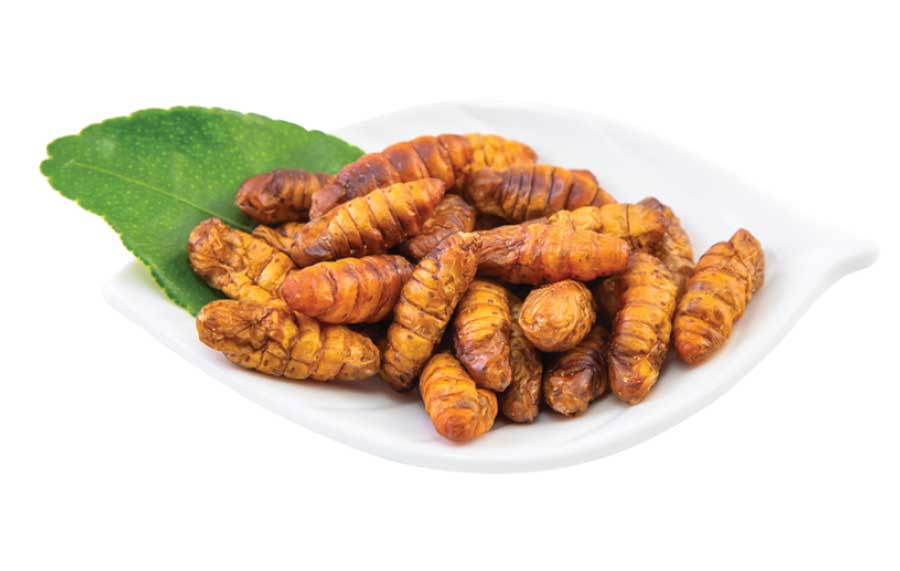 You can find silkworm Larvae, aka Beondegi, in cans in the supermarket of South Korea. Silkworm Larvae smells worse than they look and taste nutty. It is famous street food and can also be found in grocery or convenience stores. It became popular during the Korean war and is now a popular snack food. It is savory and acidic, and its outer shell is crunchy.

Beondegi is eaten in different forms in different places. For instance, In Assam, boiled pupae are eaten with salt or sometimes fried with chili pepper. In Japan, Silkworm Larvae are boiled in a sweet and sour sauce made with soy sauce and sugar. They are not delicious but are a great source of protein. Would you ever taste this weirdest food around? Is there anyone who doesn’t like ice cream? While some love chocolate flavor, others find Praline Pecan the best. Eskimo Ice cream, or popular as the Alaskan ice cream, is made with unique ingredients and tastes delicious. It is made of dried fish, dried moose, and berries.

The most common recipe of Indian ice cream comprises pulverized moose blended with moose fat. Nearly 82g of Eskimo Ice cream contains 182 calories, 3g protein, and 11g fat. It is also believed that eating ice cream for breakfast makes people intelligent. It is good to know that ice cream, regardless of flavor, makes you intelligent.

It is also known by locals as akutaq and is made with reindeer fat. Like regular ice cream, it is cold and contains animal fat. The women traditionally make this ice cream after the first catch of a polar bear.

Today, it is made with Crisco shortening with raisins and sugar. The people of the Arctic usually serve this strange food to newcomers in Alaska. If you don’t like Eskimo Ice cream, then here are other famous ice cream flavors from around the world that you can taste. 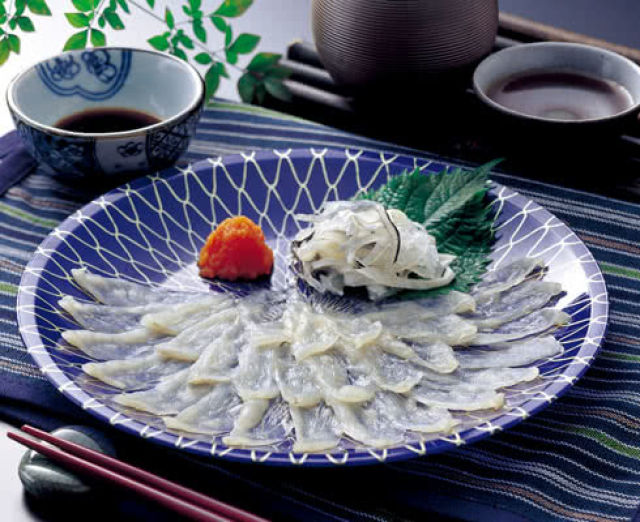 The Fugu in Standard Modern Chinese is a pufferfish. Consuming Fugu can be lethally dangerous due to its tetrodotoxin. It is prepared carefully after removing toxic parts. It is served as chirinabe and sashimi. It is a popular Japanese food and also the most dangerous food in the world.  Its liver and other organs are 1000 times deadlier than cyanide. It is an expensive dish and is served in a few restaurants in Tokyo.

But when these parts are removed, Fugu turns into a delectable dish. It tastes delicious when it is boiled or fried. Over the centuries, Fugu is consumed in Japan and with different variations. Fugu consumption was not allowed before the Meiji period. At present, the city has its brand of Fugu called Shimonoseki Fugu. It is low in calories, high in protein, and a great energy booster. 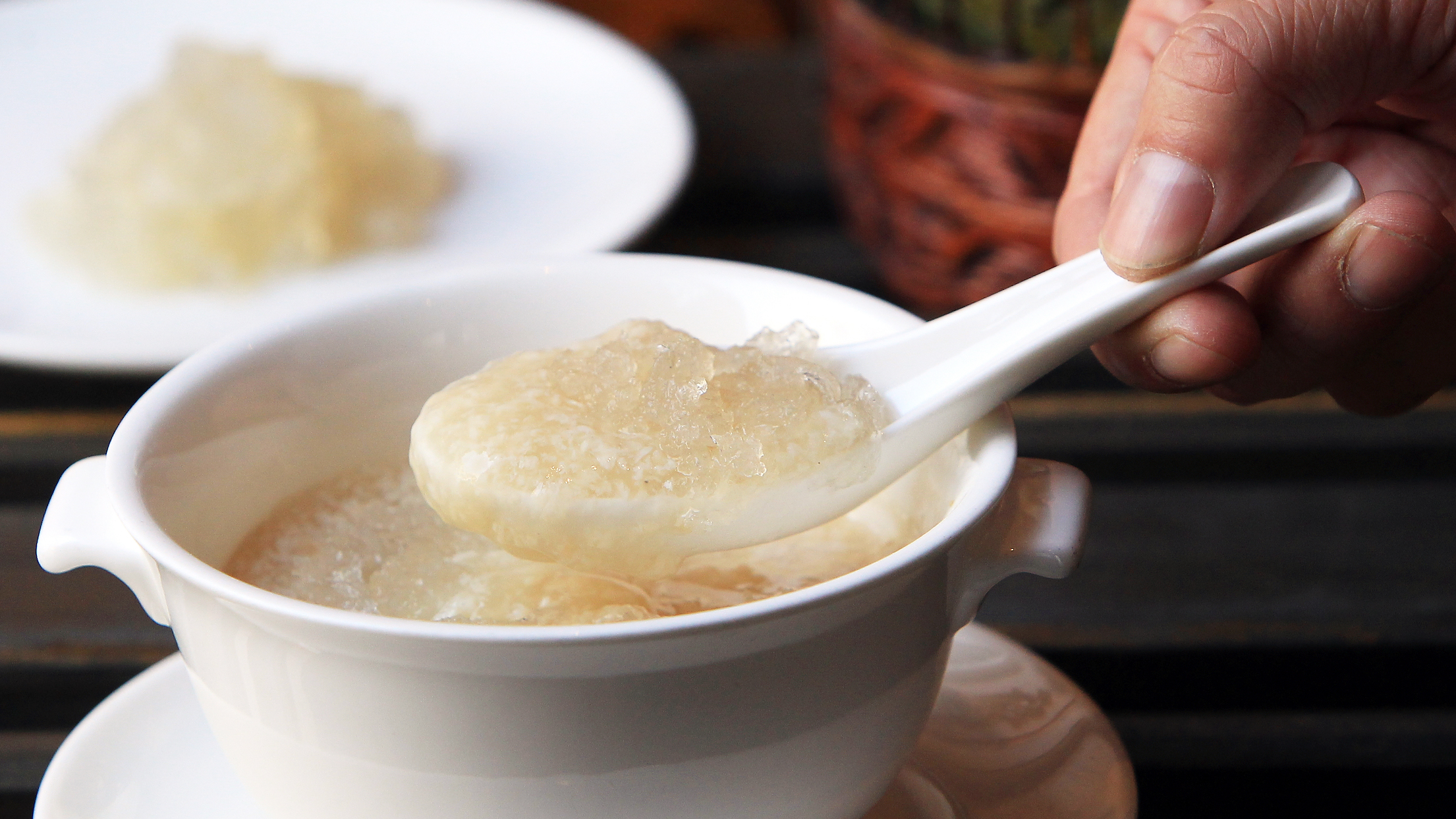 Bird’s nest soup is made from edible bird nests. The main ingredient is the nest of swiftlet birds, which are native to Southeast Asia. Edible bird’s nests are expensive animal products and are used in Chinese cuisines for over 300-400 years. The best-known use of edible birds is in Chinese Cuisines. Usually, the bird's nest is white, but there is a red version also, which is called a blood nest.

The reason why it is red is still a mystery. It doesn’t have a taste, but its texture is similar to gelatin and jelly. While some people make bird’s nest soup with rock sugar and serve it as dessert, others prefer it mixed with white milk. Boiling bird’s nest soup loses its taste.

It is rich in nutrition and is gently steamed after soaking the nest in water. Indonesia exports around 2000 metric tons of birds nest per year. It is an animal product; therefore, its import or export is strictly prohibited in some countries. It has high glycoprotein content and boosts a weak immune system. 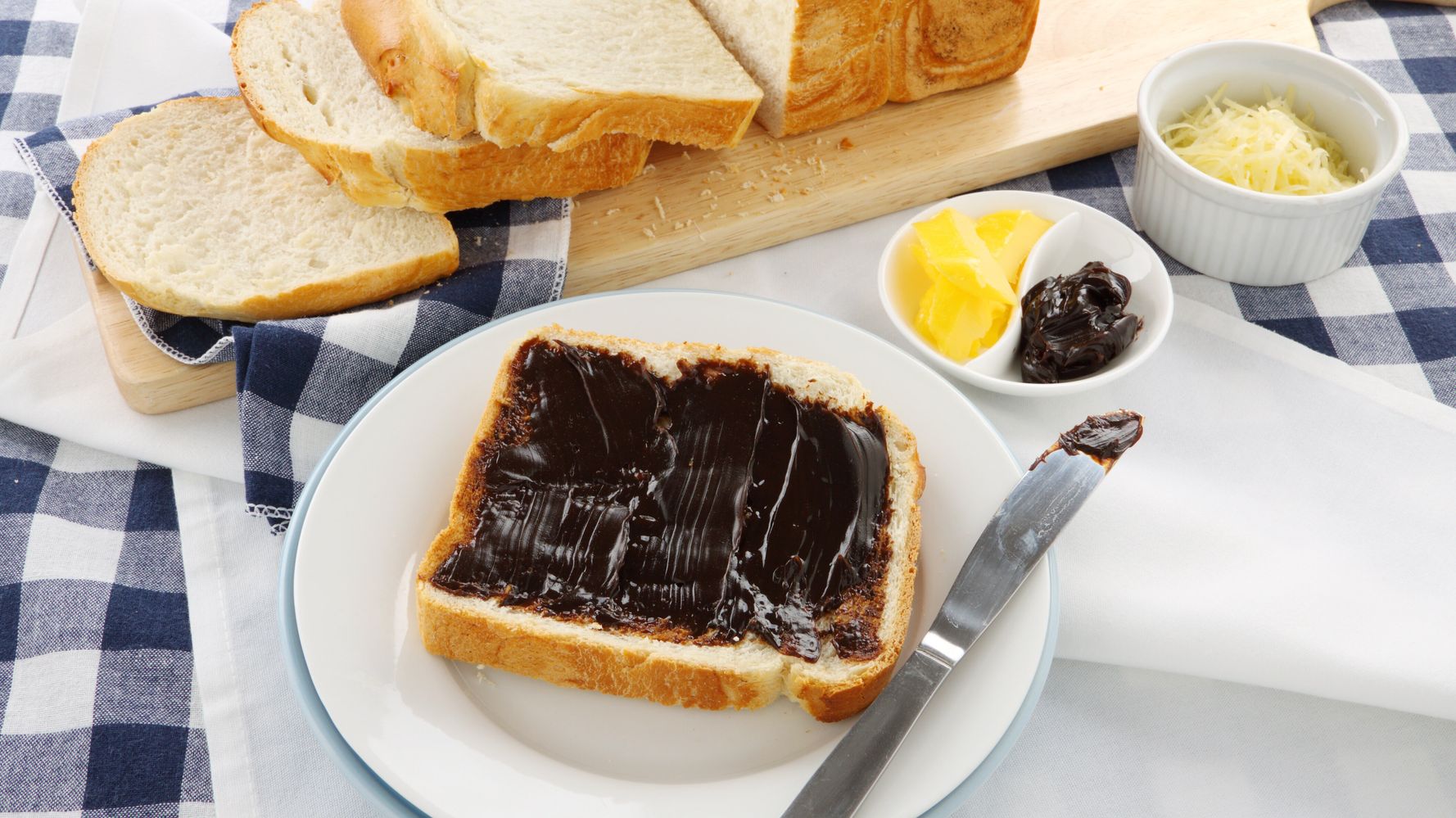 Vegemite is a dark brown Australian food developed by Cyril Callister in Victoria in 1922. The brand was owned by Mondelez International until January 2017.

It is a spread made from leftover brewers yeast extract with spice additives. It is tangy in taste with a unique flavor. Only a small amount of Vegemite is used due to its strong flavor. It is a great source of vitamin B, riboflavin, and folate.

The major ingredient of Vegemite is yeast extract. It does not contain fat or animal content. It is a staple in Australia and has a long history of over 900 years.

You would find this strange, but nearly 22 million jars and 7000 tons of Vegemite is produced every year. It is made from vegetable extract, barley, and B vitamins. One teaspoon of Vegemite contains 1.5g of protein and no added sugar. 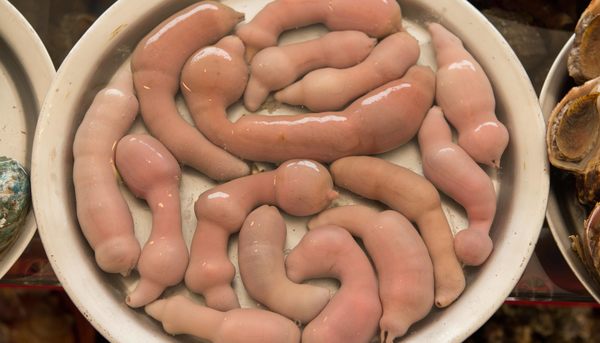 Gaebul is a marine worm found in the mudflats on Korea’s south and south-west coasts. After thorough rinsing, Gaebul is eaten raw and sometimes alive in Korea. It is dipped into the vinegary sauce and is easy to prepare. This strange food is popular in South Korea and resembles the male sexual organ.

Therefore, also referred to as penis fish. It is 10-30 cm in length and has a light brownish or pinkish color. It has a chewy texture and tastes a little salty. It is rinsed with seawater and is served in restaurants. Gaebul is a species of marine spoon worm and is also native to Japan and Russia. Like other species, it lives and burrows in sand and mud. 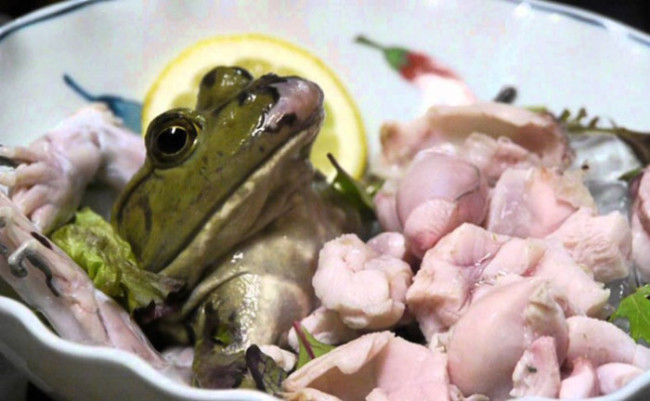 Frog Sashimi is the strangest food you would ever read about. Do you know frogs are alive till the time the dish is served? Some part of the frog is removed and boiled, then the rest is sliced like sashimi and then served on a frog. In this dish, the frog is skinned, gutted, and stabbed, and served on the plate with a lemon slice.

Frogs that are used to make Sashimi are bullfrogs. Several variations are there to prepare Frog Sashimi, but usually, frogs are still alive when you order them. The parts are removed, and everything is done at the time of serving. This dish is banned in several countries due to its wrong process of preparation.

If you want to try something unique and strange, then Frog Sashimi can be a good choice for you. Not only Frog Sashimi is banned, but these foods are also strictly prohibited in other countries. 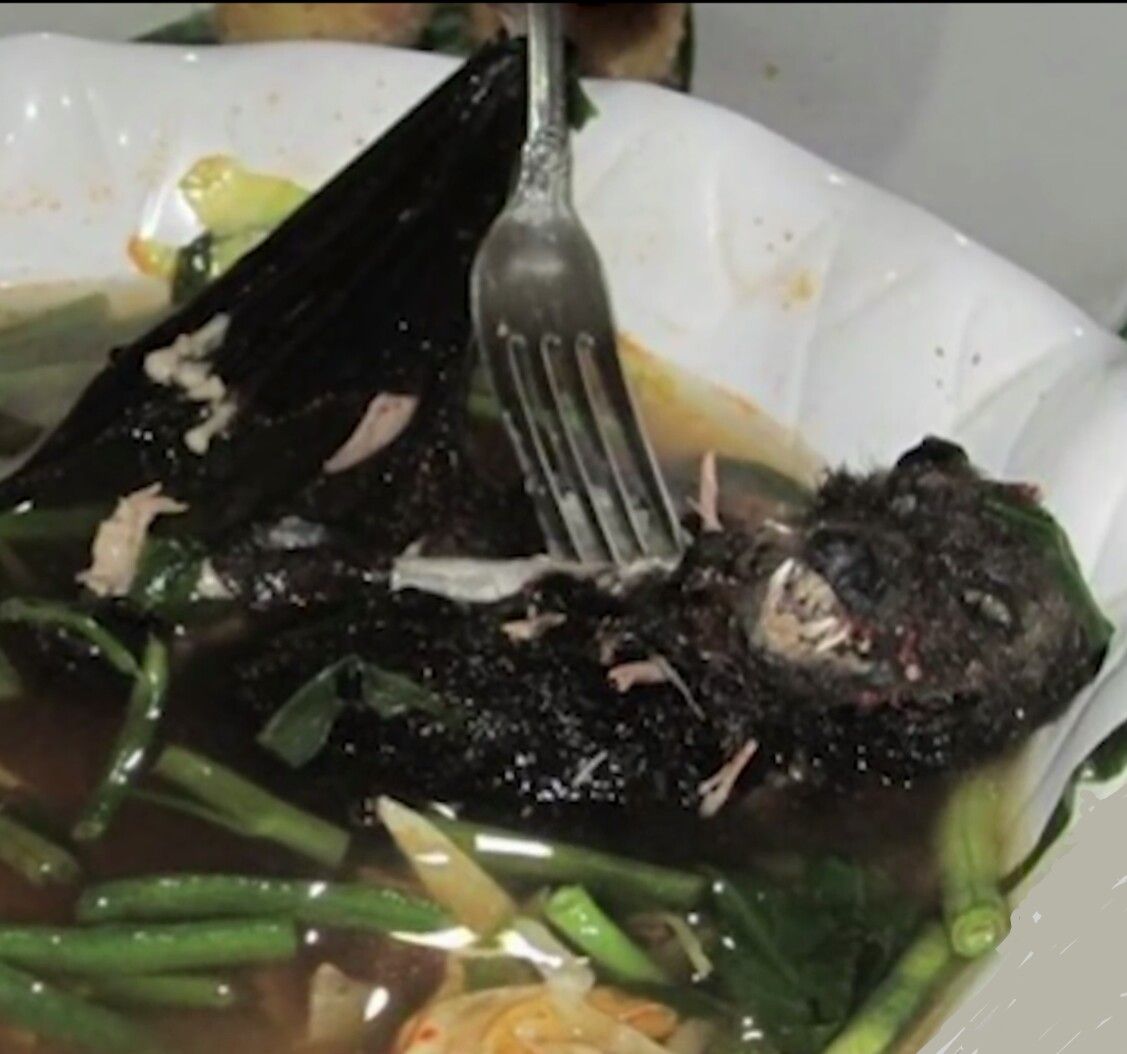 It is a meat dish made with a fruit bat in a coconut milk soup. A live bat is popped into a boiling vat of wings and fur and is served with a dash of coconut milk and vegetables. Fruit Bat soup is dangerous to eat as it can pass several diseases to humans. Also, Fruit Bat soup was wrongly blamed for the Novel Coronavirus outbreak. 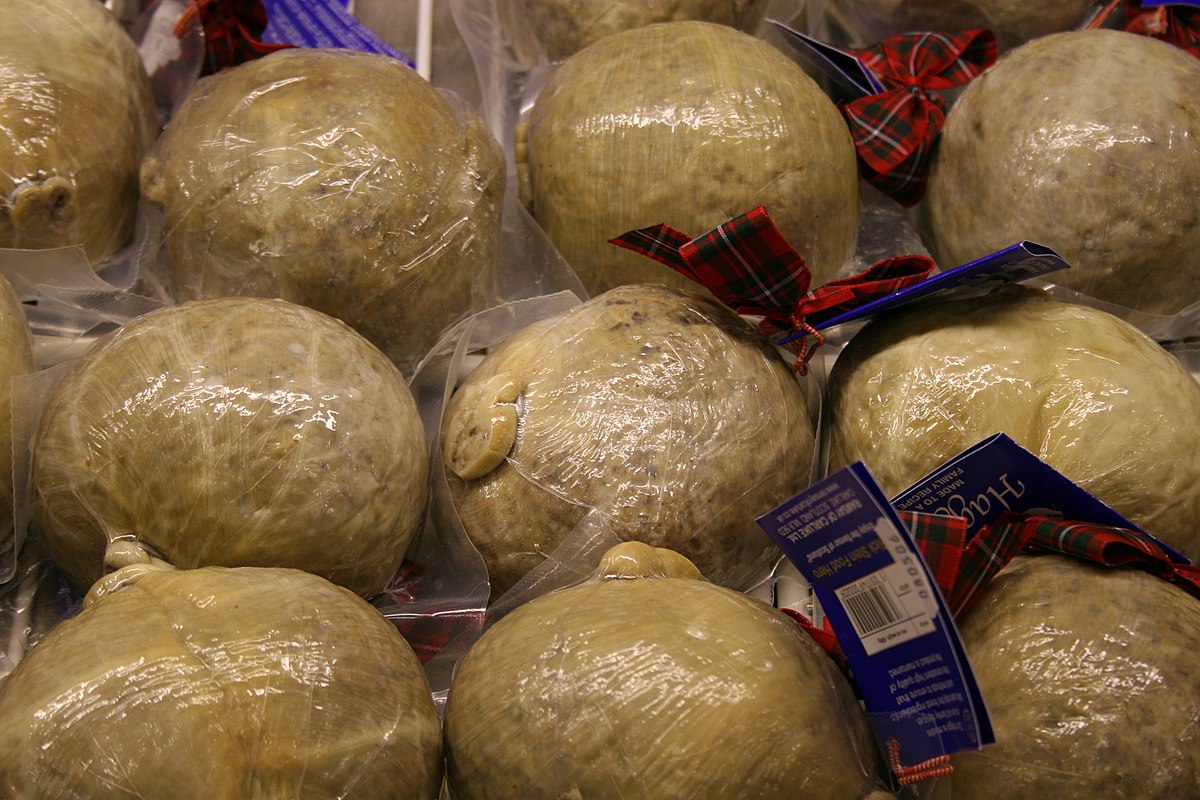 It is a pudding containing sheep’s heart, liver, and lungs, mixed with spices and salt. It has an oaty texture and a peppery flavor. The dish is of Scottish origin, but several countries have produced similar dishes with different names. The haggis is simmered in a pot or baked in a casserole dish with water. The quickest way to cook haggis is in the microwave.

Normally, it is made with sheep offal; however, several variations can include pork and beef. Haggis can be used to make stuffing or fried up for breakfast like black pudding. This strange food is traditionally served with Scotch Whiskey during the Burns supper, a Scottish commemorating poet Robert Burns. 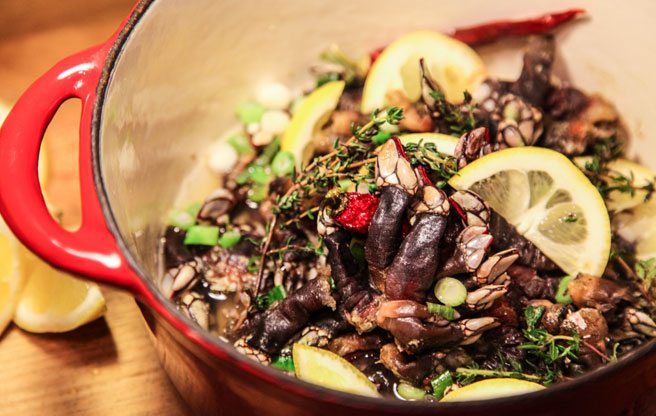 In Spain, Percebes are boiled and are served whole and hot under a napkin. The claw of Percebes is removed, and the left flesh is swallowed. They are best served with aromas of the ocean wafting through the air.

Depending on the time of the year, the price for this weird dish ranges from €25 to €60 at fish markets, with restaurants serving the orders to customers that have ordered a plate in advance.

When you travel to another country, you can experience and relish the flavors of several delicious cuisines. But these weirdest foods are rare to find and are not loved by everyone.

Have you ever tasted these strange foods from around the world? How was your experience? Would you suggest people try these weird foods at least once in a lifetime? Drop your comments below.