You might have read a number of words with same spellings who have different meanings? These words are called as Homonyms in Eng... 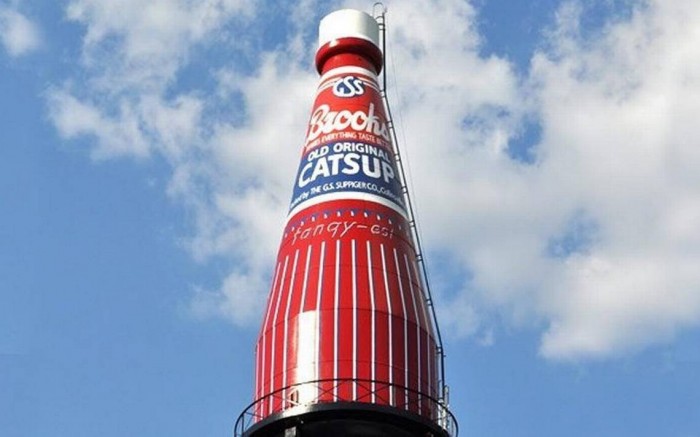 You might have read a number of words with same spellings who have different meanings? These words are called as Homonyms in English as they are spelled or pronounced little bit same similar but differs in meaning. Let us take a common example of catsup v/s Ketchup.

How exactly you spell or describe everyone’s favorite French Fries seasoning? Catsup or Ketchup? Some say their ingredients are different, some say their taste is different while some say they are exactly the same. Let’s get deep into the truth behind these words.

In the present world, both catsup and ketchup is referred to the spicy version of tomato that is mixed with vinegar and is popular condiment to snacks like pizzas, sandwiches, burgers and French fries. You would be surprised after knowing that the original version of the Ketchup had no tomatoes but it was made of brine fish and other spices. The Malay version of the ketchup had some sweet soy that was added to make it spicier.

Ketchup and Catsup are just two different spellings for one thing or you can say that is a westernized version of a condiment that European introduced in the late 17th Century.

What exactly the Ketchup was and how did they found it ultimately became the topic of debate. Let us explore more about their history, uses, differences, facts etc…

History and Origin of word

Ketchup could have been called as ke-chiap from Southern coastal Fujian region, or it could be termed as Kicap from Indonesia. Ke-chiap and Kicap both are the sauces based on shellfish, pickled fish, spices and herbs. Both Catsup and Ketchup are acceptable spellings that are used alternatively with Ketchup.  But Ketchup is the name that is popularly used today.

Catsup which also means the same is just a different Romanization of the same word, considered to sound same who doesn’t exist in English. But these different names didn’t concerned European anymore; they liked it and brought back to home giving another name catchup.

In the late 1800’s Ketchup became quite common in Britain and catsup became regular in the US for some unknown reasons. However, the two words never cancelled each other in the upcoming years. Also there were no correcting dictionaries to choose the right version of the words.

In the 17th century, English sailors first invented the delights of the sauce, a Chinese seasoning and brought it to the west side. The name Ketchup was first printed in around 1960. But the Chinese version is actually more similar to soy.

But the seasoning went through different changes with the addition of tomatoes in late 1700’s. Even the name ketchup was also termed as tomato soy. 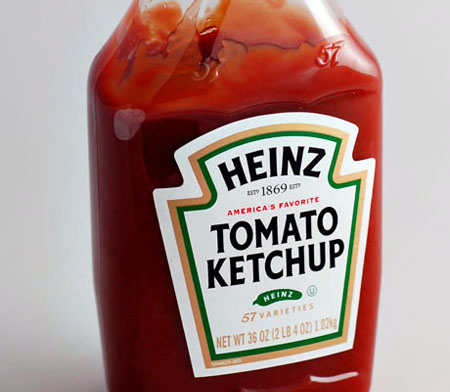 Derived from the Chinese seasoning ke-tsiap a pickled fish sauce – an expanded version in Malaysia then became ketjap and ketjap in Indonesia. Ketchup word was first introduced in Charles Lockyer’s book of 1711.

Soy comes in Tubbs from Japan, and the best Ketchup from Tonquin; yet good of both sorts are made and sold very cheap in China”.

Experiencing these Asian seasonings, the modern version of ketchup seen many changes before tomatoes became the final ingredient in 1700’s.

By the 1800’s tomatoes were being used as the base for Ketchup. In 1810, Alexander Hunter in Receipts in modern cookery gave a recipe for the tomato sauce that stepped as – first bake the tomatoes.

Following with removing the peel and seeds, salt, shallot, garlic and chili vinegar was added. Then the mixture was boiled, strained, skimmed and filled in the bottles. 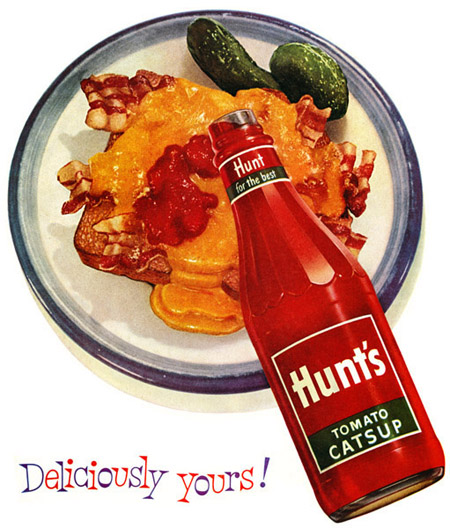 Catsup first appeared in a quote by Jonathan Swift in 1730. The term has been used by the big manufacturers, but later on it was changed to ketchup.

And, for our home-bred British cheer, Botargo, catsup, and caveer”.

What Made The Difference Between the words To Get in the Action?

According to a Heinz spokesperson, Henry John Heinz first brought his product to market as “Heinz Tomato Catsup,” but changed the spelling early on to distinguish it from competitors. Del Monte did not switch spellings until 1988, after it became clear that ketchup was the spelling of choice for American consumers. Hunt’s switched the name of their product from catsup to ketchup significantly earlier.

Ketchup v. Catsup in the US Supreme Court

Ketchup v. Catsup was also a landmark case in front of the United Nations Supreme Court. The case came up from an argument among American consumers on the correct spelling of the word pronounced “catch-up”.

The controversy between Ketchup and Catsup actually arose 500 years ago. This tasty paste was developed during the Spanish-American War as a by-product. Martian aliens were in search of a product that will serve both as gun carriage axle grease and Scurvy preventive. Theodore Roosevelt discovered that a paste made of onions flavored with sugar, prevented scurvy and would also be suitable to grease axles. This invention was highly used by the Army. The onions worked so well that the axles moved faster than the infantry.

When the caisson drivers shouted to their infantry colleagues, “Catch up, catch up!” the guns would be unlimbered and caissons parked. The local feline population found the onion grease irresistible when these caissons were parked. This was an incident that gave rise to the popular names.

Another one was when an artillery soldier wrote to home: "You should see the local cats sup on our caisson grease!" Since both phenomena were noticed during the same time, both these names are used.

The fear of Scurvy was rampant in World War I. So, The American Expeditionary Force decided to sneak the preventive into Hamburger sandwiches. This became the perfect Hamburger condiment for the Americans.

The English and French later used the excess axle grease for their starving people by serving it with fried potato stripes. French incorrectly named these as “French Fries”.

Role of the Great Depression

Great Depression occurred 10 years after World War I. Commodities like milk and cheese were needed since many people were unemployed. With the advent of internal combustion engines, horse drawn caissons were not needed and grease became expendable. It was also available in surplus, so the government began giving out this paste at soup kitchens and breadlines. The paste was being called by its old army names. Artillery veterans called it Catsup and Infantry veterans called it Ketchup.

Those who called it Ketchup were led by William K. Heinz, whose original name was Gregory Hines. He was an infantry officer in the Spanish-American war. He had heard the Artillery men cry Ketch-up! Seeing the rising popularity, Heinz started a company that produced 57 varieties of Ketchup.

Another man Mike Hunt who served as an Artillery officer was also developing his company. He had seen the cats supping on the axle grease. When he started his company, he sold the paste as Catsup. Both companies had their founding lines on World War I and so both of them prospered.

Since both the companies sold the same product under different name, Hunt alleged that his product was better being a member of the branch but Heinz disagreed and both sought a legal recourse.

Hunt sued Heinz in state court in New York demanding that either Heinz desist from referring the product as Ketchup or pay compensation to Hunt. Heinz sued Hunt in the federal court of Pennsylvania demanding that either Hunt desist from marketing the product as catsup or include cat by-products in his formula. Both the cases were consolidated and remanded to federal court.

"This case is the biggest bunch of baloney I have ever seen. What kind of a weenie would even bring a case like this? I hereby order both litigants to be flogged, their companies dissolved and all proceeds delivered to me, personally, in care of the City Bank of New York, and their children sold into slavery. Furthermore, I don't give a Royal Flying Rat's Ass about whether you call it catsup or ketchup. I mean, really."

The Appellate court tossed the case out of the court and fined thousand dollars from each attorney, issuing the opinion “Who cares?”

The case also made it to the Supreme Court and the decision made was to maintain the double spelling practice.

The Ingredients Used in Catsup and Ketchup

It could happen that Catsup sometimes tastes spicier than normal Ketchup. This was the basic difference between ketchup v/s catsup that is not really known by everyone.

Let’s Compare Ketchup and Catsup with the Table 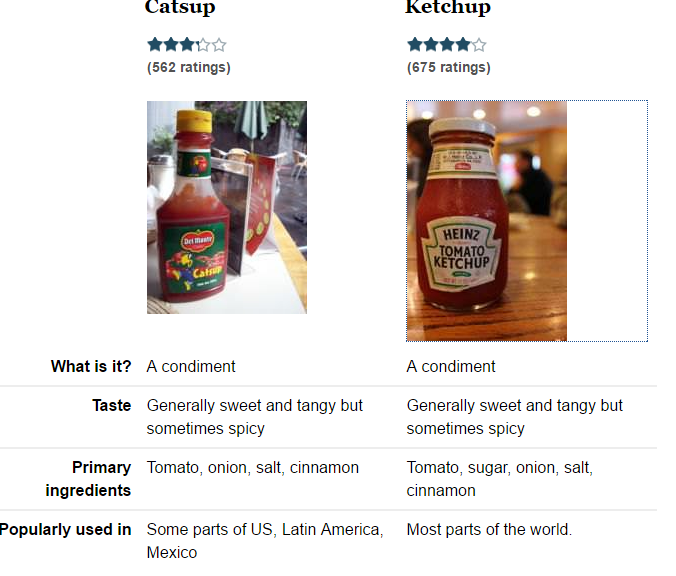 Previously, fast food outlets distribute ketchup from pumps into small paper cups. Now in the fast food outlets Ketchup is normally dispensed in small packets. People tear the top or side and squeeze the ketchup from the packets. Heinz began offering a new portion package called ‘Dip and Squeeze’ packet which allowed the diners to tear the top and squeeze the contents out or as an alternative tear the front off the package and use it as a dip cup of the type generally supplied with meals.

It was the time when a quick mix of vinegar, tomatoes and spices was about to be declared a vegetable by the US govt. A condiment whose important ingredient is a fruit, would be equivalent to a serving of vegetables therefore could be stand in vegetable in school lunches.

The thought was about to be processed but what did this mean for catsup? It was believed that Ketchup would become a vegetable and not catsup.

But officially, Ketchup was not declared a vegetable. Later it was found that it contain Lycopene, an antioxidant that is associated with decreased cancer risk rather catsup who has been known to cause cancer.  So, this the reason why Ketchup is officially known worldwide better as ketchup rather than Catsup.

Some Still Use Other Variants of Catsup

Well, most of the manufacturers and consumers used the word ketchup; there are still people who use alternatives to the word catsup, katsup, catchup. Even catsup recipes are still in circulation where tomato doesn’t form the base such as Picante catsup and apple catsup.

It is also headlined that first recipe of ketchup appeared in the book of “The Complete Housewife in the year 1972 by Elizabeth Smith”. Surprisingly the recipe contained vinegar, pepper, shallots, nutmegs, other spices, white vine but “NO Tomatoes”. From there it took two centuries to discover tomatoes as a base for ketchup. Till the time, catsup and ketchup recipes used walnuts and mushrooms as the base.

Catsup v/s Ketchup price are nearly same but only differs in brand value. The point to be noted is that the prices for Ketchup and catsup may vary as per the brand but roughly they are almost same.

Throughout the 19th century the fight between catsup v/c Ketchup was well written on the pages as well as left the mark in the consumer marketplace. In the end Ketchup won and it is now preferred spelling around the world.