Popular Gods and Goddess of War from Various Mythologies & Their Powers

Read about these popular gods and goddesses of war who are known for their unbelievable powers and are a member of different gods groups. 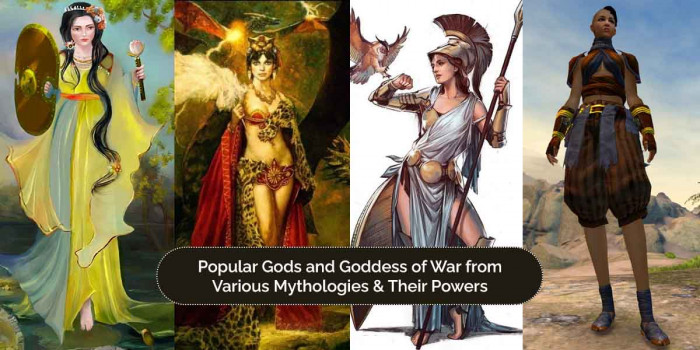 In mythology, several gods and goddesses have been worshipped for years for their power and unique characteristics. For instance, Ambrosia is considered as the Greek God of food, Agni is the God of fire, and Boreas is the God of air. Similarly, a war deity is a goddess of mythology associated with war or bloodshed. War and strife are a part of human society.

Many cultures include Goddesses of War, despite the belief that women were banned from fighting. But in Greek culture, several fighting goddesses with weapons & goddess of wisdom and war are known. The tribe of female warriors was celebrated in culture. Other goddesses of war, such as Ah Hulneb, Andraste, Athena, and more, are common in mythology.

Goddess of Wisdom and War 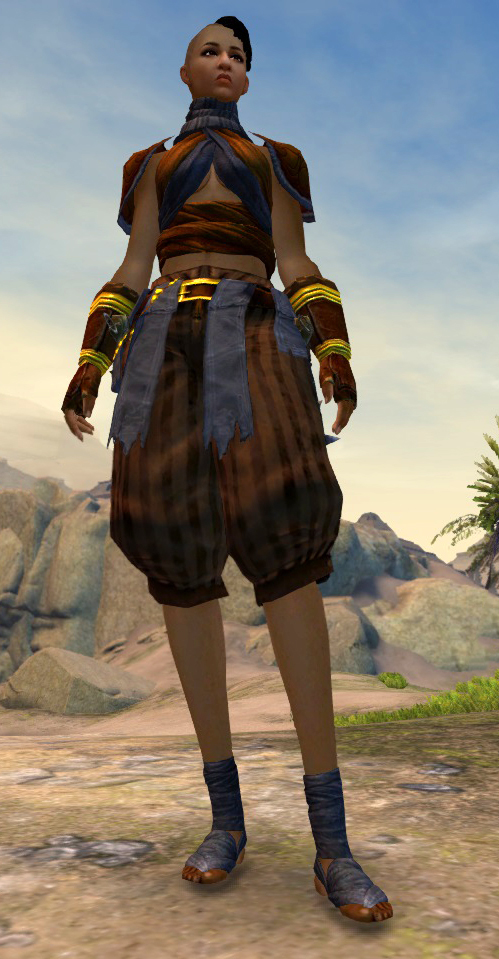 Agasaya is the Semitic war of the goddess. She became the warrior aspect of the Ishtar and lived on in history. Agasaya's name translates to Shrieker and is known to have weapons like bow, scimitar, and arrows. 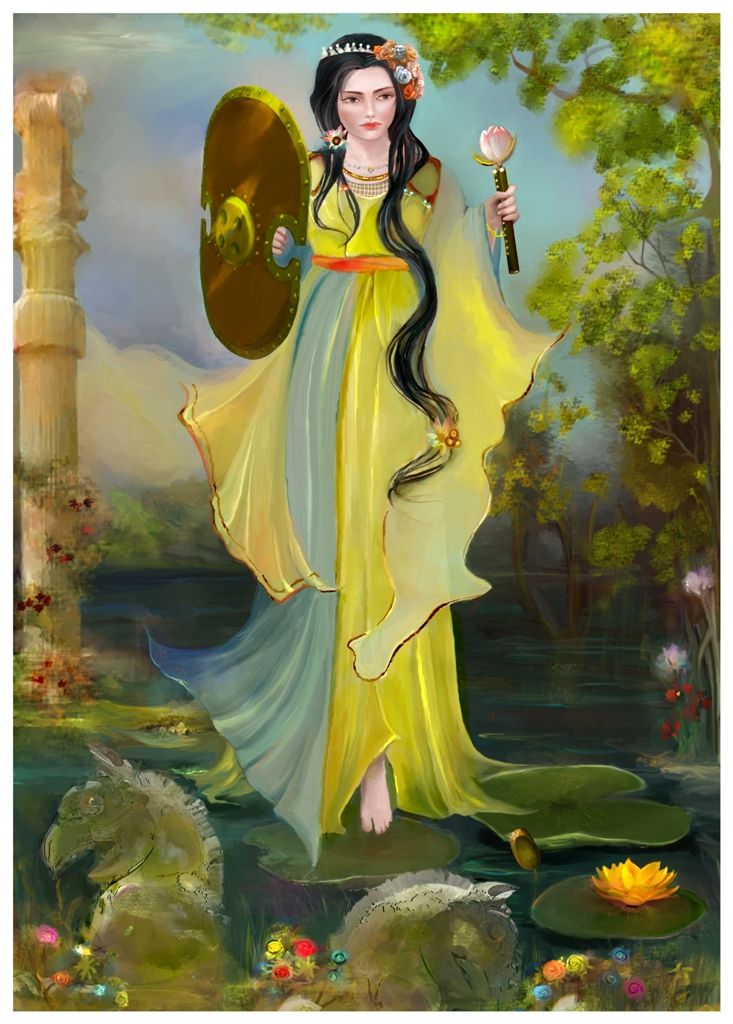 Anahita is the Persian goddess of fertility, health, and wisdom. She was the patroness of women and the Goddess of war.

Her symbols are green branches and water. This Goddess of fertility embraces the attributes of warm waters that flow from the celestial realms into our lives. She ruled all over the water streams, sea, and other life-giving fluids.

She is also portrayed as a beautiful young virgin with full breasts. She is one of the forms of the Great Goddesses which appears in the ancient eastern religions. Anahita was identified with the planet Venus, and her cult included the practice of temple prostitution.

She probably existed in different forms in the 3rd millennium BCE when Persian religion developed in Greater Iran. The Aryans who settled in Persis had been a large part of the migratory group and included Indo-Aryans, who would settle in Northern India. At this time, Anahita and Goddess Saraswati were the same deity.

She was seen as a pure and beautiful woman in a white gown embroidered with gold and wearing golden earrings with a necklace around her neck. She carries the twigs of life in one hand and drives a chariot drawn by four horses of cloud, sleet, wind, and rain. Along with Mithra and Verethragna, Anahita lost her power during the Zoroastrian period, but she didn’t disappear and was then known as Yazata.

Ankt was one of the popular goddesses of wars worshipped by different groups in Egypt. It is believed that Ankt was a goddess from Asia and worshipped by immigrants to ancient Egypt. She was quiet and calm and had a warped family history like the Greek gods.

She was depicted as a woman with a headdress of reed or ostrich feathers. She depicted holding a scepter topped with an ankh, and her animal was the gazelle. Anket might have been the sister of the goddess Satis. There’s a temple erected on the island of Sehil dedicated to Ankt. Her name means embracer, and in Greek, it is also spelled as Anukis. 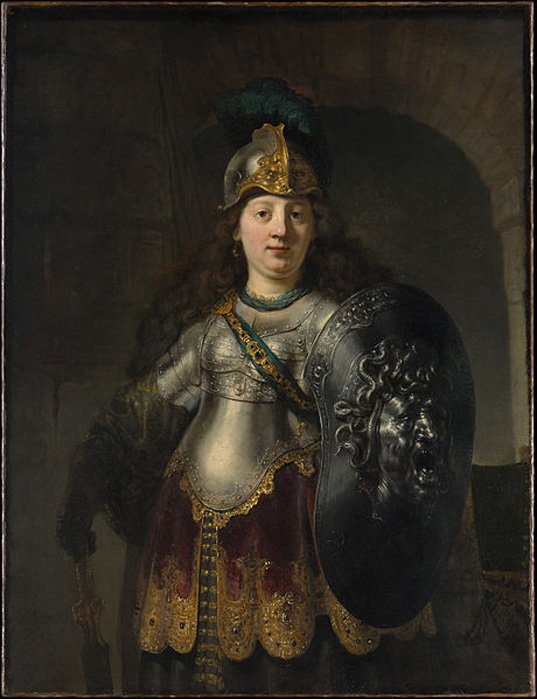 She was originally an ancient Sabine goddess of war identified with Nerio. Her temple in Rome was dedicated in 296 BCE near the Circus Flaminius, during the war with the Samnites.

In the military cult of Bellona, she was associated with Virtus. Bellona then traveled outside Rome, and her temples have been recorded in Britain, France, and Germany. You can find her name in several poems, where it is used as a synonym for war. In her hand, she carries a shield and other weapons and sounds a trumpet for the attack. Her original name was Duellona and sometimes also referred to as the sister of Mars.

Her temple in Rome can be found in the Campus Martius, near the Circus Flaminius. It is believed that Bellona is the offspring of Jove and Jupiter. It was assumed that this goddess of war was a deity of the Sabine people, a tribe that once inhabited Central Italy. Apart from visual arts, Bellona also appeared in the performing arts and literature. 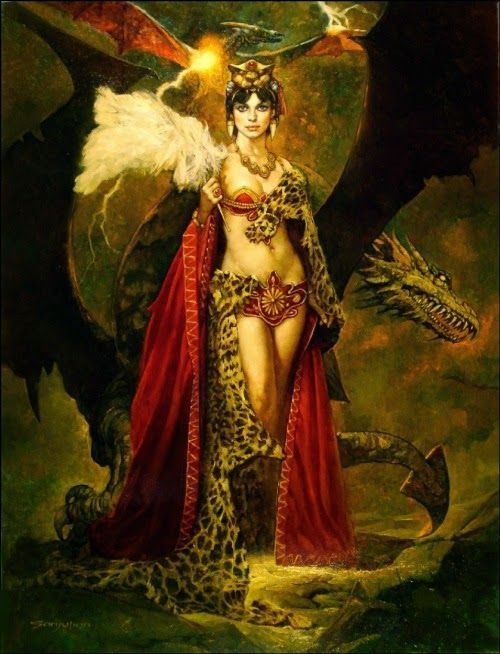 Inanna is the Sumerian goddess of fertility, sensuality, and also of war. She was later identified by the Assyrians and Akkadians as the goddess Ishtar. She was seen as the bright star of the morning and evening and was identified with the God Venus.

In some myths, Inanna is the daughter of the Enki, the freshwater and wisdom. Inanna is an ancient goddess associated with sex, war, and political power. Initially, she was worshipped in Sumer and was known as the ‘Queen of Heaven.’ She appeared in more myths than Sumerian deity.  She was believed to have taken over the Eanna temple from An. 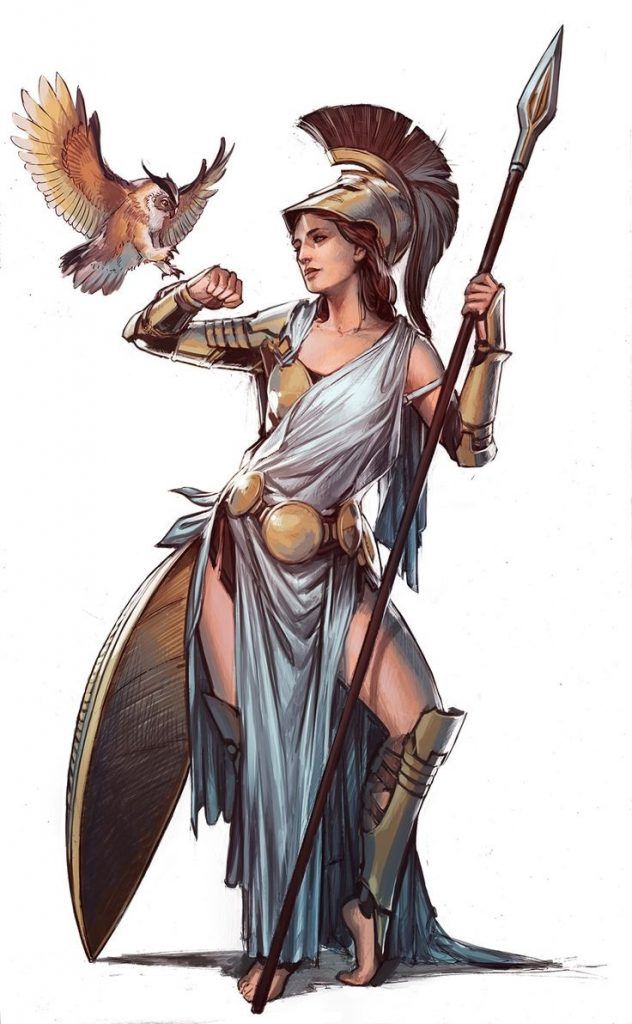 Athena is the ancient Greek Goddess linked with wisdom, handicraft, and warfare. She can be seen in art wearing a helmet and holding a spear. She was known as Polias and Polio Muchos, and her temples can be seen located at the acropolis, in the central part of the city.

She is also a warrior goddess and was believed to lead soldiers into a battle as Athena Promachos. In Greek Mythology, this Goddess of wisdom is believed to be born from the forehead of her father, Zeus. She plays a crucial role in Iliad, an ancient Greek poem in dactylic hexameter.

She is also the divine counselor to Odysseus. She is associated with the city of Athens. She was originally the Aegean goddess of the palace and protected the king. 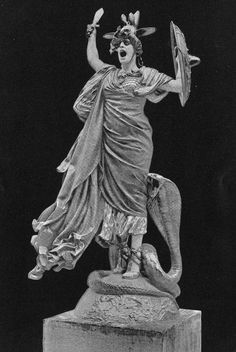 Enyo is called the sister of War and resembles Eris. As the goddess of war, she is responsible for orchestrating the destruction of cities. She is depicted in the Supreme of War and was involved in the war of the Seven against Thebes. 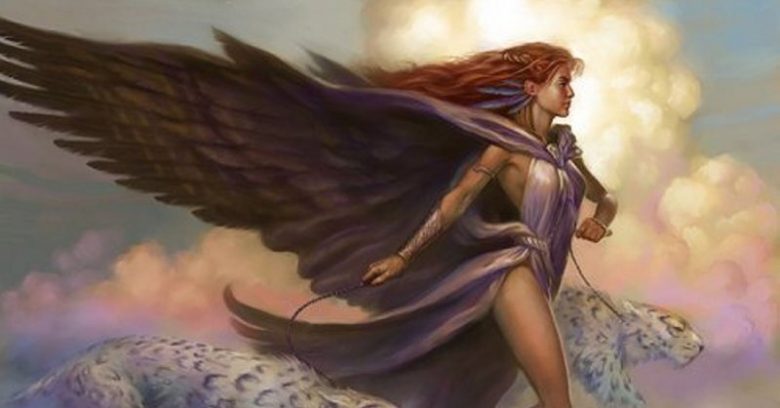 Freya or Freja, in Norse mythology, is a goddess associated with war, sex, gold, and beauty. She is the owner of the necklace Brísingamen and rides a chariot pulled by two cats. Along with her brother and mother, she is a member of the Vanir (a group of gods associated with fertility and wisdom).

She rules over her heavenly field and allows other deities to use her feathered cloak. Her name means lady mistress in old Norse. In the Poetic Edda, she has been in the poems  Völuspá, Grímnismál, Lokasenna, Þrymskviða, and more.

She is the leading character in the poem Hyndluljóð, where she assists her servant and finds information about his ancestry. Also, she has appeared in the Prose Edda books. Freya is depicted as a Goddess wearing a Viking helmet and carrying a sword. She is a shaman Goddess who can travel in the different realms by using her cloak to shapeshift into a bird.

In Japanese religion, Hachiman is the divinity of archery and war. He is the god of war but more strictly defined as the tutelary god of warriors.

He is the protector of Japan and the Imperial House. His name translates to God of Eight Banners. Hachiman’s symbolic messenger and animal are Dove. He has been worshipped by the farmers as the god of agriculture and by fisherman. In Shinto, he became identified by legend as the Emperor Ojin, who reigned in the 3rd and 4th century.

Other Gods of War 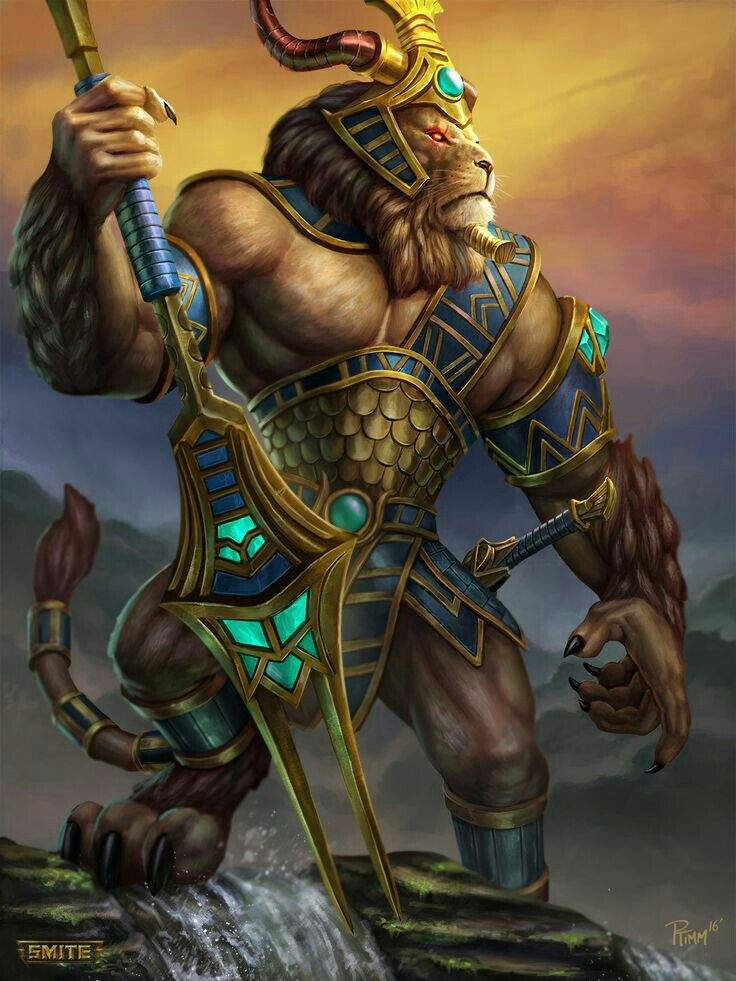 In Egyptian mythology, Anhur was the god of war, worshipped in the Egyptian area of Abydos and Thinis. It is a myth that Anhur had brought his wife, Mehit, from Nubia, and his name reflects this.

As he was the war of God, he was the patron of the ancient Egyptian army and the epitome of the royal warriors. This god of war is also a playable character in the online battle arena. He is also a chaotic god in the game NetHack/Slash'EM. 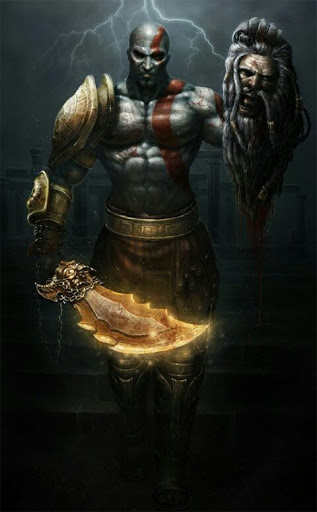 Maher is the god of the Himyarites and the son of the god Ashtar. He was the deity of war and is comparable to Mars or Ares in Greek mythology.

He held a place of importance with the Axumites, the god of the pagan period. 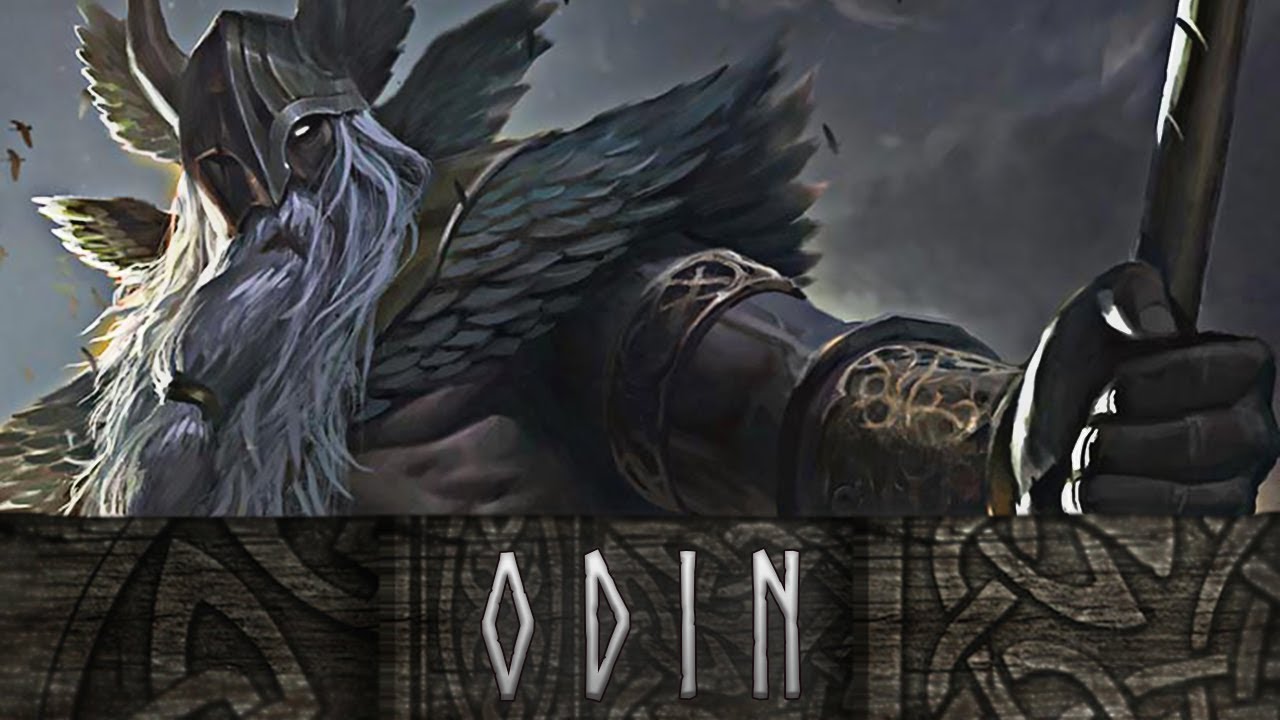 Odin is a revered god in Germanic mythology. He appears as a god throughout the history of Northern Europe. In the modern period, the folklore of Germanic Europe continued to share about Odin. In old English text, this Norse god of war holds a particular place as an ancestral figure among royalty.

He is accompanied by his animal companions and familiars. He is the subject of interest in Germanic studies and has numerous theories regarding its figure. You won’t believe it, but over 170 names are recorded for Odin.

While some names referred to the myths involving him, others referred to the religious practices linked with him. In the poem, Odin is mentioned in most poems of the Poetic Edda. The poem Völuspá features Odin in a dialogue with an undead völva. Besides this, this god of war is also mentioned in the books of the Prose Edda. He is also featured in the sagas that make up Heimskringla.

In mythology, you can read about these gods and goddesses of war and their powers. Do you know other facts and names of Gods and Goddess of wisdom and war who are worshipped even today? If so, share about them with us. 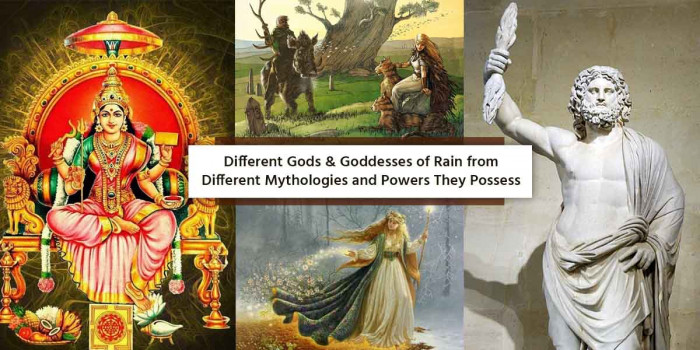