Hephaestus, Dazhbog, Svarog, Vulcan, and others are considered as the Gods of fire. How well do you know about them?

There are different gods of fire in different mythologies. For instance, in Greek mythology, Hephaestus is the god of metalworking, artisans, fire, and volcanoes. In Roman religion, Vulcan is the god of fire and is given all the attributes of the Greek Hephaestus.

Also, Vesta is the goddess of the hearth and its fire. Caucus was the fire-breathing son of Vulcan, who was worshipped in ancient times.

In Hindu mythology, Agni is the god of fire, Mātariśvan, is associated with Agni, and Agneya is the daughter of Agni and the guardian of the South-east. Let us know about these gods and how they are worshipped.

Hephaestus - He Made All the Weapons of the Gods in Olympus 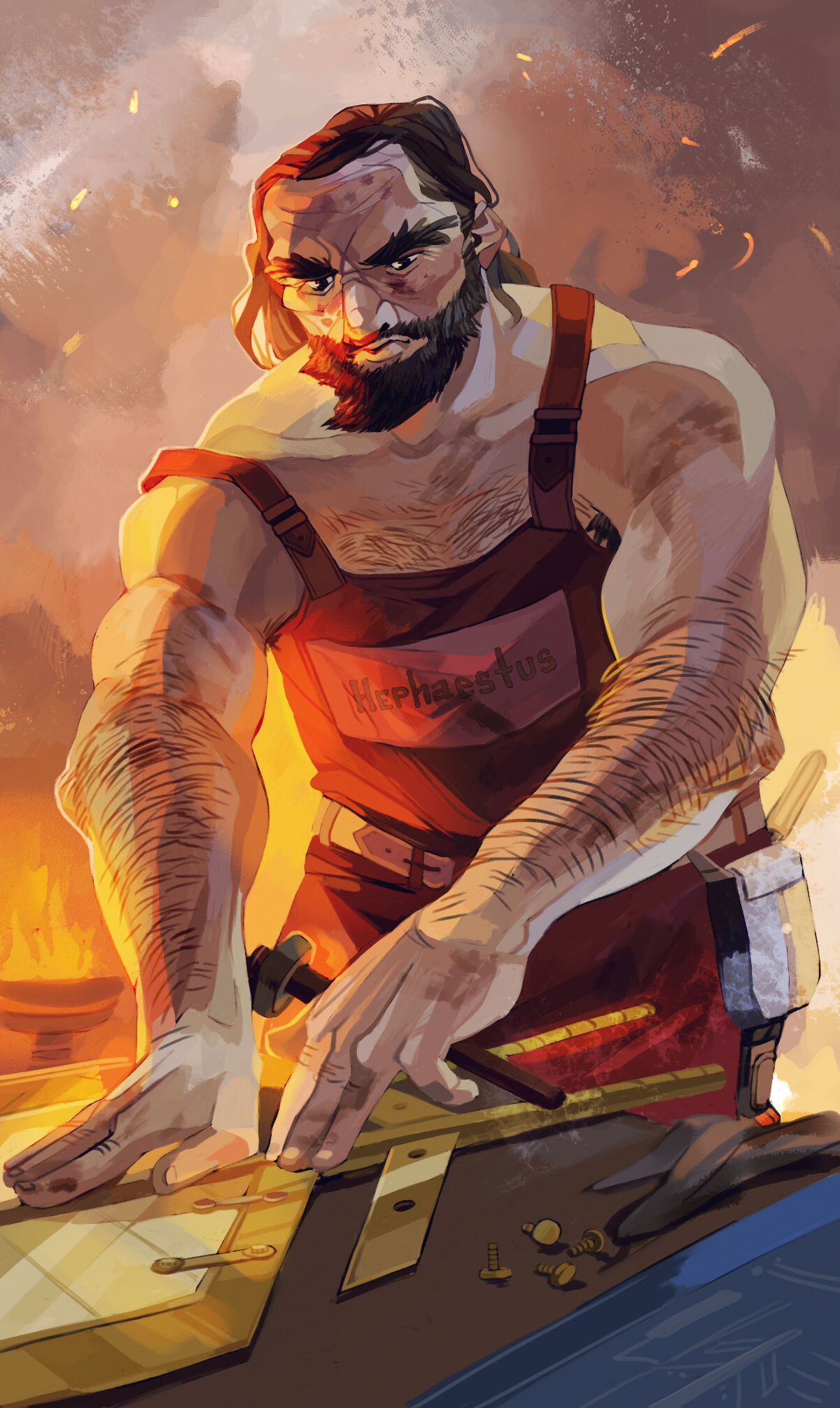 According to Greek mythology, Hephaestus was either the son of Zeus and Hera or was Hera’s parthenogenesis child. As a smithing god, he made all the weapons of the Gods in Olympus. The cult of Hephaestus was based in Lemnos. His symbols are a pair of tongs, anvil, and hammer.

You can also read about the gods of air from Greek mythology and their powers. 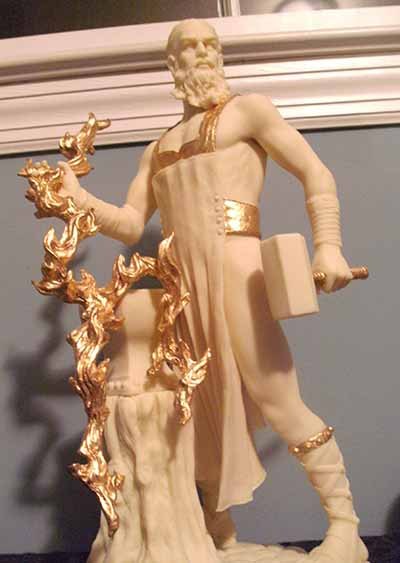 According to Hesiod, Hera gave birth to Hephaestus as revenge for Zeus giving birth to Athena without her.

Homer (semi-legendary author of the Iliad and the Odyssey) mentioned Hera as the mother of Hephaestus, but there are not enough tales to say that Zeus was his father. According to the Pseudo-Apollodorus, Hera gave birth to Hephaestus alone.

According to different tales, Hephaestus's consort is Aphrodite. However, in Book XVIII of Homer’s Iliad, the consort of Hephaestus is a lesser Aphrodite or Aglaia, the youngest of Graces. 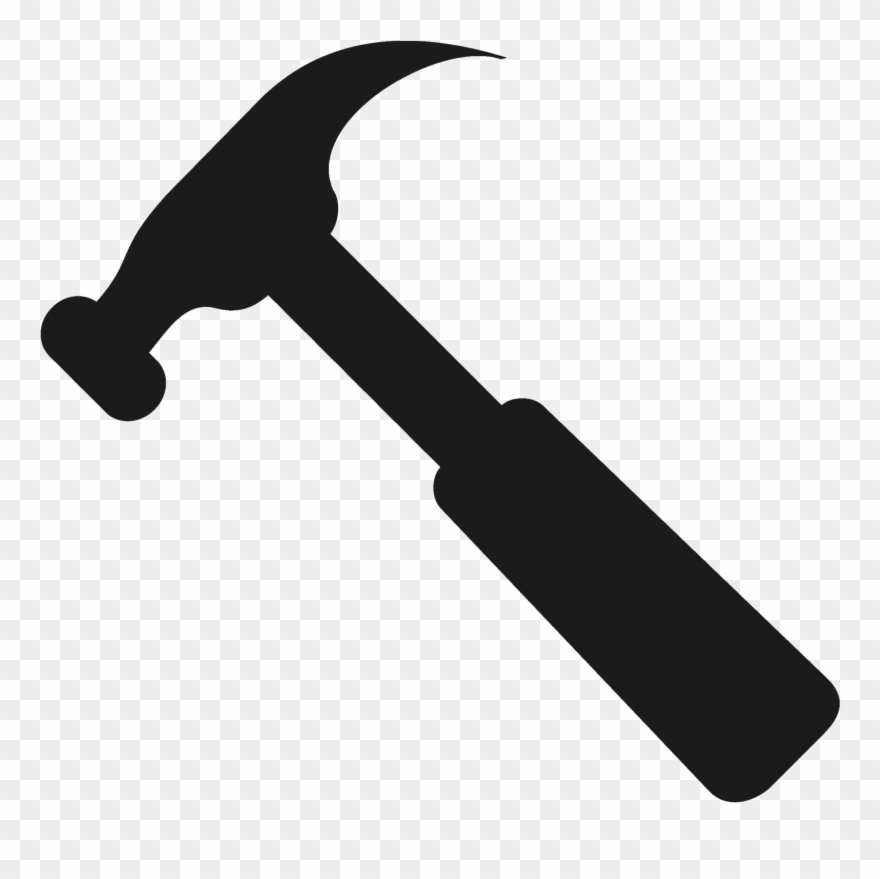 Hephaestus was portrayed as a man with a beard, having a hammer, and other crafting tools like oval cap and chiton. In some myths, he built himself a wheeled-chair, which helped him overcome his lameness.

His ugly appearance is taken by some to represent skin cancer resulting from arsenicosis caused by arsenic exposure from metalworking. 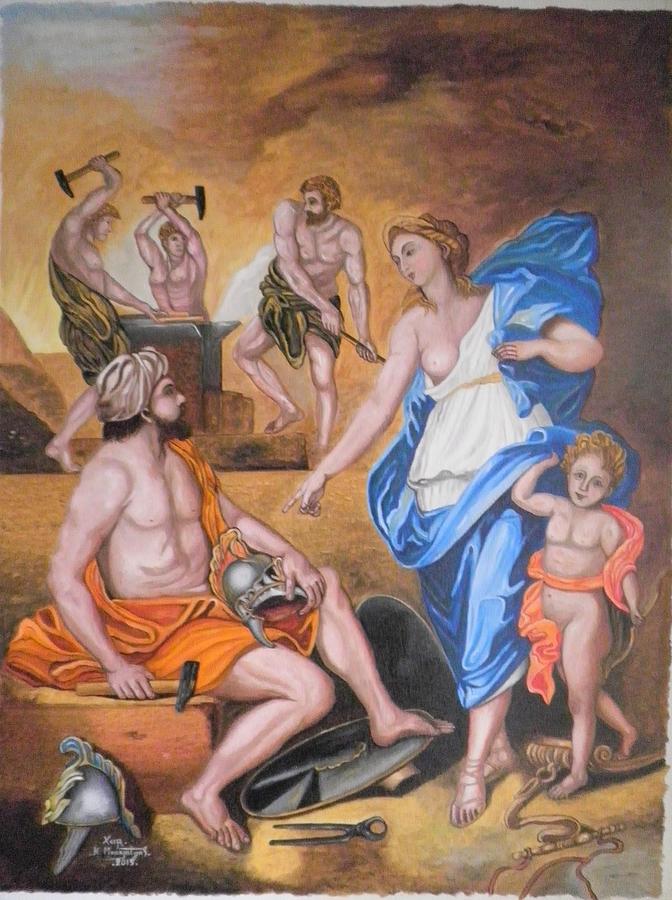 Aphrodite was married to Hephaestus but had an affair with Ares, the god of war. He found about this affair through Helios and planed a trap against them.

When they both were lying on the bed, Hephaestus trapped them in an unbreakable chain-link net and dragged them to Mount Olympus to shame them in front of other gods. 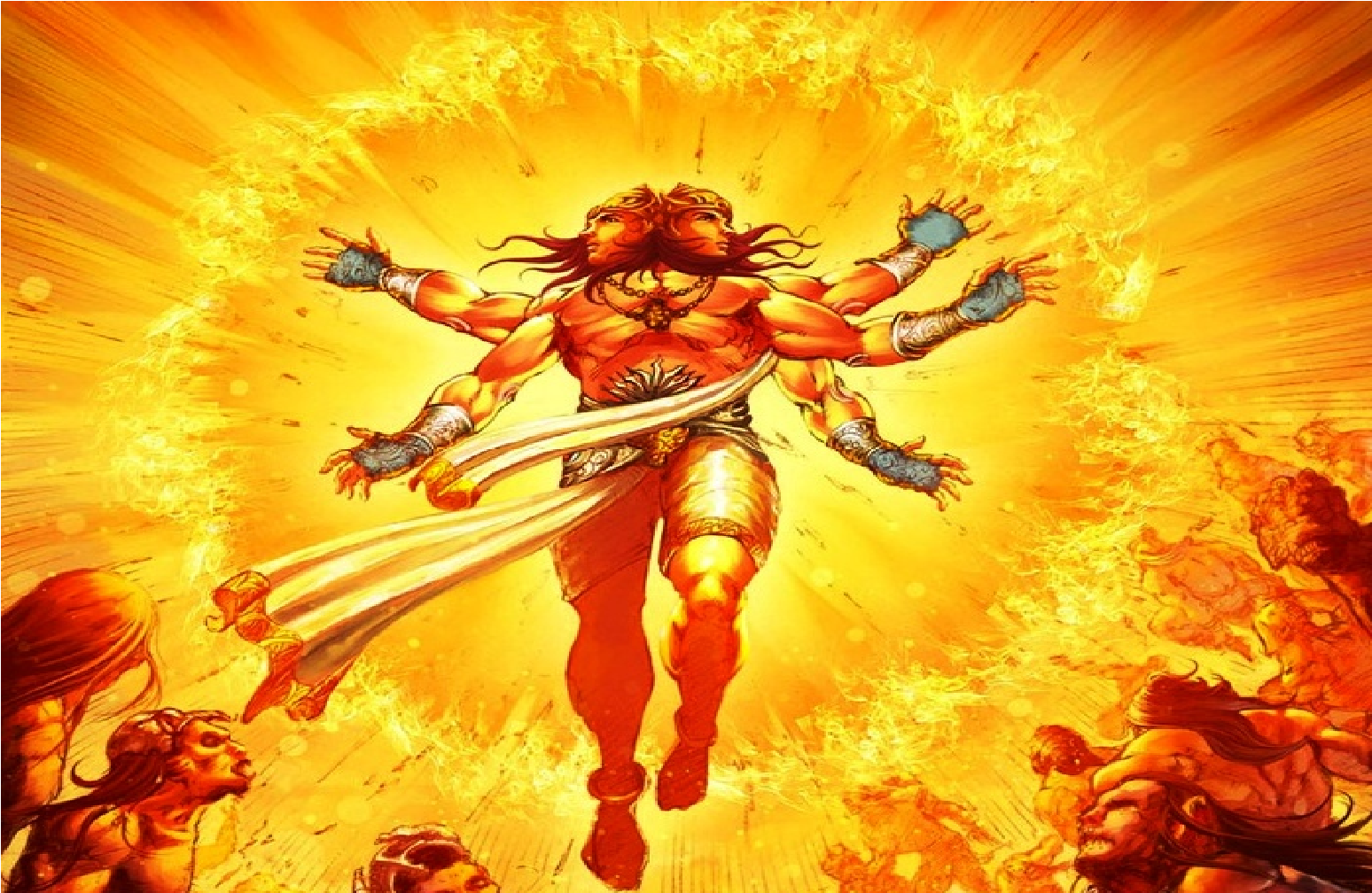 In Vedic literature, Agni is considered the mouth of the gods and goddess that conveys offerings to them in Homa. Agni is the Hindu God of fire and remains to be an important part of Hindu traditions. Mundaka Upanishad added seven tongues of Agni as visvarucī, manojavā, sulohita, karālī, sudhāmravarṇā, ālī, and sphuliṅginī.

Several theories have been published about the origins of Agni. While some say it has traces associated with Indo-European mythologies, others believe it has traces to mythologies with the Indian tradition. In Vedic traditions, Agni is prominent in the hymns of Vedas. In the Rig Veda, it has over 200 hymns that praise hymns. Agnis is also featured in different Upanishads of Hinduism.

Agneya is defined as a divine and powerful goddess. It is also read that masculine epithet Āgneya is used to depict the Southeastern cardinal direction. Her father, Agni, is the Hindu God of fire and has been worshipped throughout the Indian subcontinent. Mātariśvan is the name of Agni in Rigveda. It is closely associated with Agni, a messenger of Vivasvat that brings the hidden fire to the Bhrigus.

In Egyptian mythology, Ra is the deity of the sun. Ra was believed to rule the earth, the sky, and the underworld. He was portrayed as a falcon and shared the characteristics with the sky god Horus. Ra was represented in different forms.

The most common form was a man with a solar disk on the top and falcon, and a coiled serpent on the disk. Other forms showed a man with the head of a ram. In different literature, he was described as an aging king with silver bones and hairs of lapis lazuli.

In Egyptian mythology, Sekhmet is the protective lioness goddess of sun and fire. Upon death, Sekhmet continued to protect Egyptian pharaohs, bearing them to the afterlife. She is also considered to be the daughter of Ra and is associated with Hathor (goddess in Egyptian religion) and Bastet. Sekhmet was portrayed in her statuettes and engravings with fewer clothes.

Wadjet was also considered to be the ancient local goddess of the city of Dep. It is the protective serpent goddess who sends fire to burn her enemies. She was linked to the pharaohs as a protective deity. Here is everything you should know about Ancient Egyptian myths and legends. 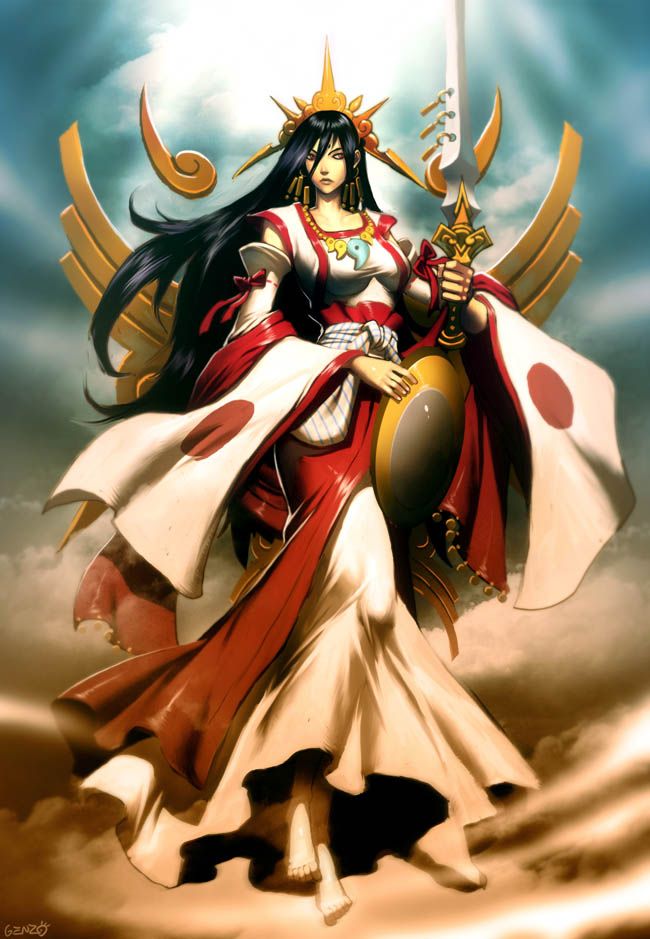 In Japanese mythology, Kōjin is the god of the stove. He represents forces that are turned towards the betterment of humankind. The representation of Kōjin is simple. It is elaborated as a statue and is commonly seen in Buddhist temples. 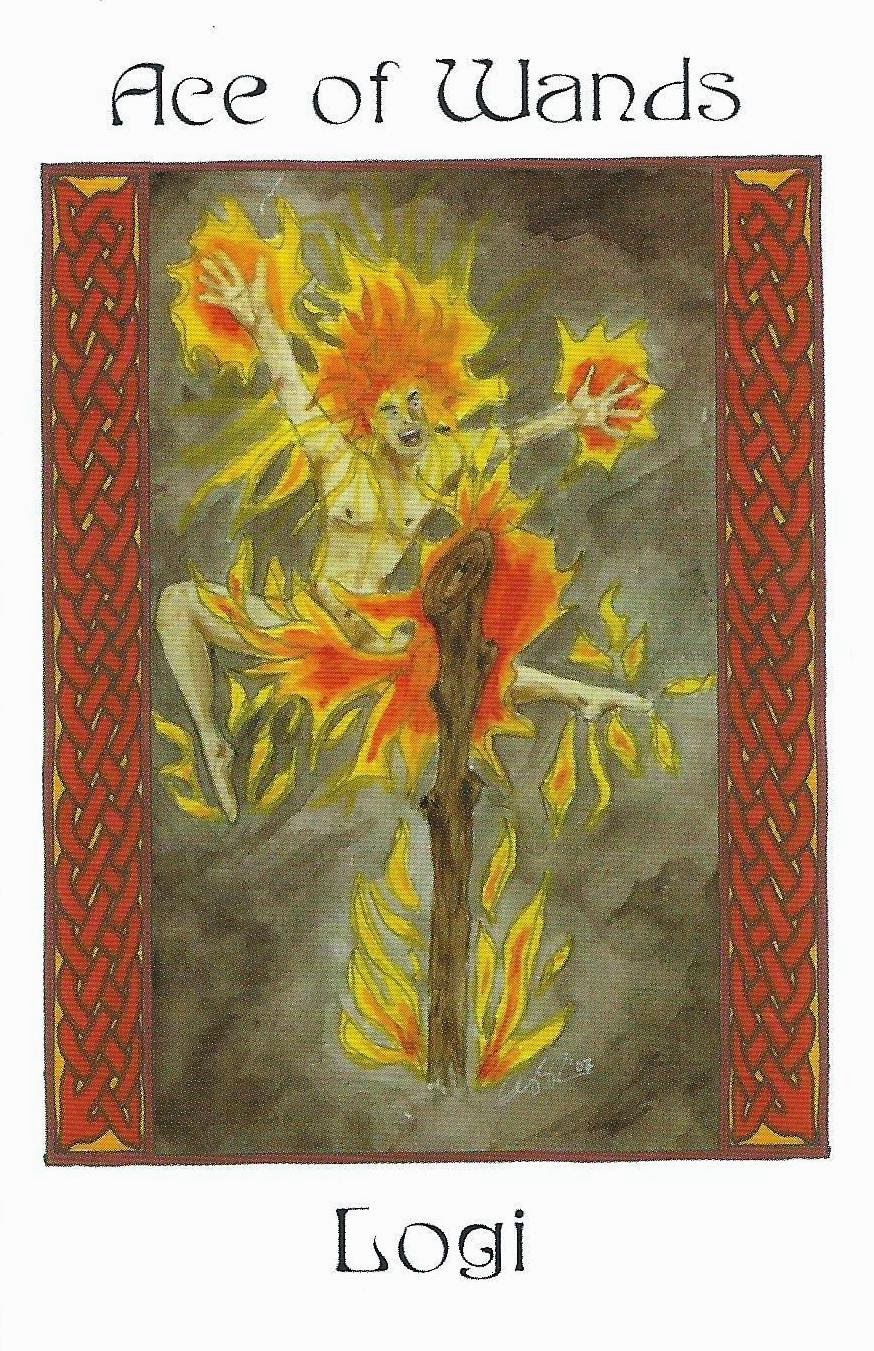 According to Norse mythology, Logi or Halogi is the personification of fire. He is the brother of Ægir ('sea') and Kári and the son of the jötunn Fornjótr. The word Logi translates as fire or flame. These words are also used in the poem as a synonym of the sword.

Glöð is a queen who figures in the Norse Þorsteins saga Víkingssonar (it is a legendary saga which takes place in the 7th century). She is the sister of the king of Álf the Old of Álfheimr. She is the wife of Logi, with whom she had two daughters Eimyrja and Eysa.

Glöð is more considered as a mythological figure than a historical one. People sometimes wrongly identified her as the wife of Loki god and rather than Logi. Here are amazing Norse mythology, stories & facts that you might haven’t read in books. 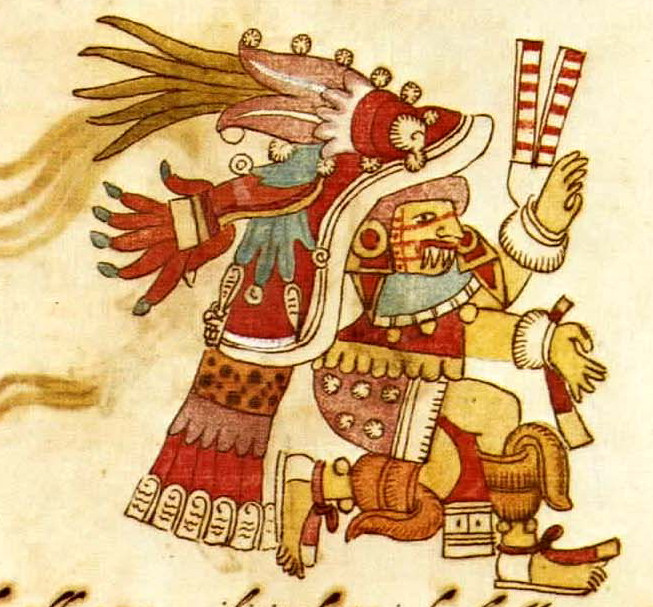 In Aztech mythology, Chantico is the deity reigning over the fires in the family hearth. She was associated with the town of Xochimilco as well as warriors.

In Codex Borgia, Chantico has a yellow face marked with two red lines and a yellow body. She is represented sitting in a chair and wearing a nose ornament. She also has a series of small disks that wrap her head.

"She has a bulge of rubber on her lips, half of her face painted red, a bouquet made of dried herbs, her gold ear decorations. On her back, she carries a bundle of light. Her shirt with water flowers. Her shield with a mosaic of eagle feathers, She has her clothes in one hand that ends in a tip, made of inverted feathers and with paint of obsidian tips. Her white kilt, her bells, her white sandals.”

Chantico is usually considered as a female deity; the gender of Chantico is not clear in historical writings.

Mixcoatl was worshipped as the central deity of Huejotzingo and Tlaxcala. Mixcoatl is depicted with a black mask over his eyes, and his features are shared with Tlahuizcalpanteuctli.

He can also be identified by his hunting gear and included arrows and net basket for carrying the dead game. He was the father of 400 sons. He was related to more than 400 gods, together with three brothers and their sisters. He was also thought to be the father of important deity Quetzalcoatl. 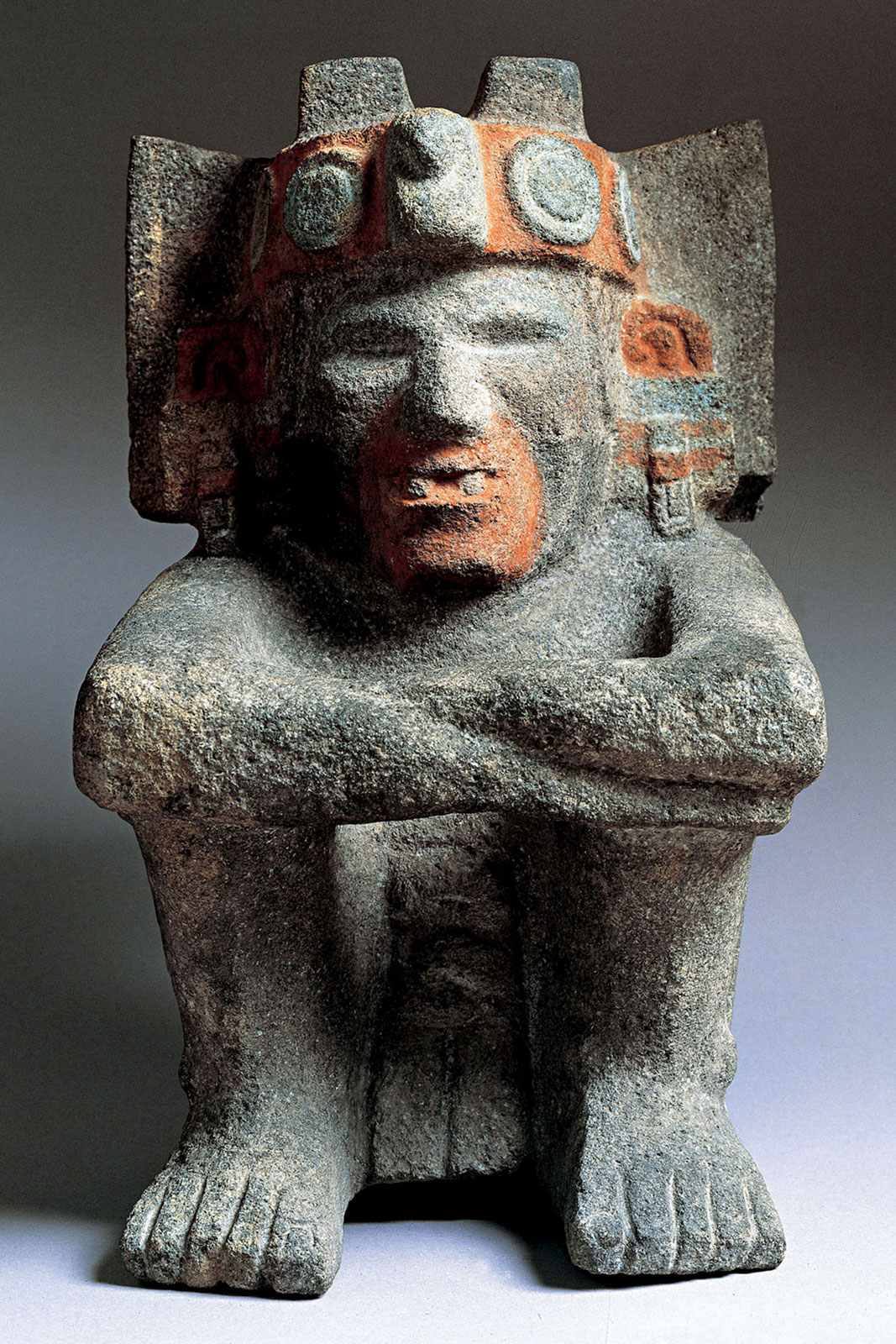 Xiuhtecuhtli, in Aztech mythology, was the god of fire, day, and heat. He was the personification of life after death, light in the darkness, and warmth in the cold. Stone sculptures of Xiuhtecuhtli were buried as offerings, and several statues have been recovered during excavations at the Great Temple of Tenochtitlan.

Xiuhtecuhtli's face is covered/painted with red and black pigment. He has usually adorned with turquoise mosaic and worn a descending turquoise Xiuhtototl bird on his forehead. He had a paper crown painted with different motifs and colors.

Different mythologies have different gods of fire that are worshipped for their power. Similarly, several goddesses of love and beauty share different stories as per mythological records.

Do you know other things about the god of fire? If yes, then don’t forget to share them.