Since ages, God is associated with miracles. And, here is one story which seems exactly like one. In a temple of Sri Radha Raman Ji in Vrindavan, it is said that the Hindu deity manifested himself. Yes, you read it right! Let's know the full story here! 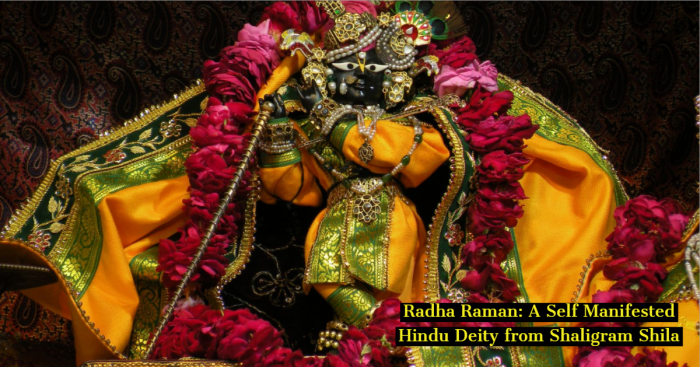 Vrindavan, also known as Brindavan, is a holy town in Uttar Pradesh, India. Located on the original forest of Vrindavan, it is considered as a place where the Hindu deity Krishna spent his childhood on the banks of the Yamuna river.

Many fascinating temples of Lord Krishna are present there such as Radha Vallabh Lal Ji Temple, Bankey Bihari Ji Temple, Radha Damodar Temple, and many more. And, one of them is Radha Raman Ji Temple. But what's so distinctive about this one? Well, that is, the idol established in the temple is self-manifested. Yes, it is not created by any human but the deity itself. Let’s know the full story here. 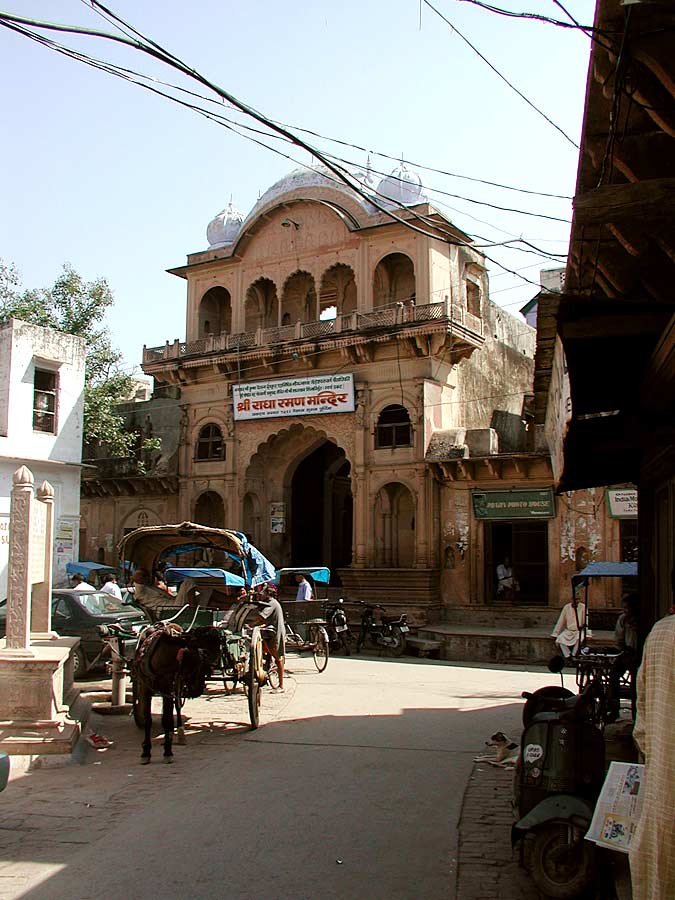 As we know, there are several forms of Lord Krishna. And, Radharaman Ji is one of the most loved forms of all. The temple is located near the road of Nidhivan garden.

“Radha-Ramana” name itself signifies “the one who gives pleasure to Shri Radha Rani.” Also, Radha Ramana is one of the few genuine idols still present in Vrindavan since the sixteenth century.

Built by the six Goswamis, the disciples of Sri Chaitanya Mahaprabhu, the temple is one of the seven most important and oldest one of Vrindavan. The unique trait of Radha Ramanji is that it is the self-manifested form of the God who bestowed himself, in his threefold or tri-bent form (Tribhanga mudra), to one of the Goswamis- Gopala Bhatta Goswami. 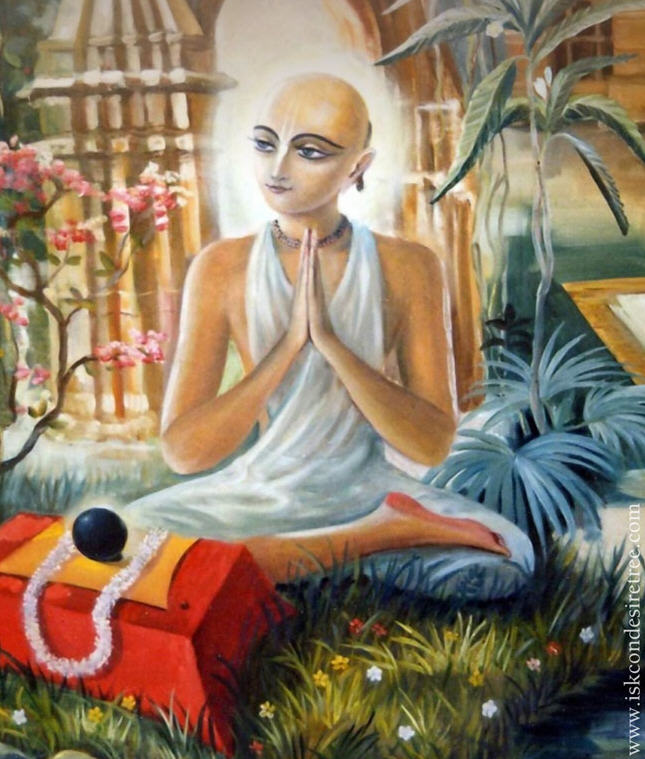 It could be said that the six Goswamis founded this holy city of Vrindavana as well as they firmly established the teachings of Lord Chaitanya Mahaprabhu through their various writings. One of those six Goswamis were Srila Gopal Bhatta Goswami.

The Story Behind the Appearance of Sri Radha Raman Ji 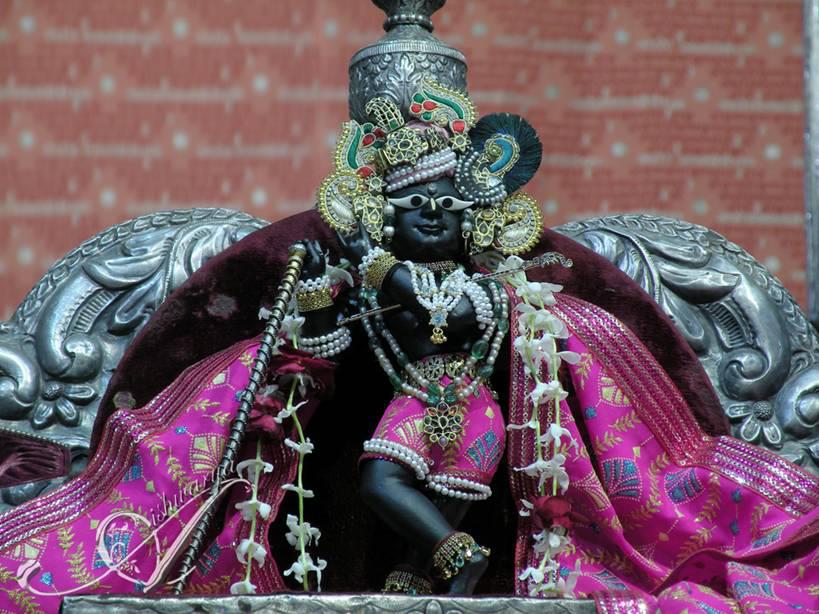 After the disappearance of Sri Chaitanya Mahaprabhu, Gopala Bhatta Goswami started feeling lonely and depressed. Following that incident, Goswami Ji left for a Nepal trip. Some legends suggest that he went to Nepal because Sri Krishna asked him in one of his dreams that “If you want my darshan then come to Nepal,” whereas some tales suggest that it was a normal trip of his.

As he reached Nepal, he went for a bath in the river Kali Gandaki. While he dipped his Kamandal (a pot) in the river, it was filled with 12 Shaligrams (Shell used as an iconic symbol of the God Vishnu). He was surprised to see those 12 shells in his pot. At first, he thought it to be a mere coincidence and dropped the shells back into the river and emptied the pot. However, when he dipped his pot second time in the river, he was surprised to see those same shells enter his pot again. This time he was not only shocked but also realized that they are not normal stones and also understood that this is not any coincidence. Hence, this time, he kept them in his bag and came back to Vrindavan.

Now, he started worshipping the shells, considering them as a blessing of the lord. But there was one wish of great devotee Gopal Bhatta Goswami to serve the Lord in the form in which he could decorate him with beautiful ornaments as well as garments.

Besides this, he also wished to make the deity seated on a swing and wanted to see him in a form in which he could see the features of Lord. He wanted to see the Lord's lotus eyes, legs, hands, and other extraordinarily beautiful features.

Still, he kept them in a piece of cloth, and that’s not it, he used to take them with him tied with the corner of the cloth wherever he goes. But one day, a weird incident happened to him.

A rich wealthy man entered in the Goswami Ji’s property in Vrindavan and offered a variety of ornaments and garments to him for the shells.

At that time, Gopal Ji prayed before his God & said,

“Oh lord, You are very Merciful please give me darshan and full fill the desires of your devotees. I want to serve you in your form, with arms, legs and a blissful smiling face with pretty lotus eyes… If I have deity I would be able to decorate him with these dresses and ornaments.”

Well, as we all know Almighty Lord Krishna is recognized for his mercy and love for his devotees, it could be said that lord proved it once again.

Yes, next morning when Gopala Bhatta saw the shells, he was astonished by seeing the idol of deity Sri Radharaman Ji among the other shells. Deity’s grace was unparalleled, and his features looked beautiful even more than anything known to the world. The idol may be small, but it was magnificently fascinating in appearance as Radha Ramanji was now in the world.

Lord had manifested himself from one of the shells, and eleven shells were remaining. And needless to mention that happiness of Gopala Bhatta's had no bounds now. Being in an ecstatic state, he even started worshipping his lord in the form he had always wanted for.

Many people earlier claimed that the idol has been carved and not manifested. Still, some profound learners later stated that for humans, it is impossible to carve so skillfully on the stone (shells) of which the idol of deity Radha Raman Ji is made. It is indeed the Shri Krishna’s miracle and love for devotees.

The idol of Radha-Raman Ji is around 30cm (1 foot) tall. There are markings of discs on the deity’s feet and back. It is stated that the lotus face of Sri Radha Ramana is like Sri Govinda Ji's. His chest resembles with the chest of Sri Gopinath’s idol, and lotus feet of his are like Shri Madan Mohanji's Idol.

Moreover, the legend is famous there that by visiting Radharaman Ji, one gets the ‘darshan’ of these three primary deities of Vrindavan,  simultaneously.

Celebration on Day of Appearance 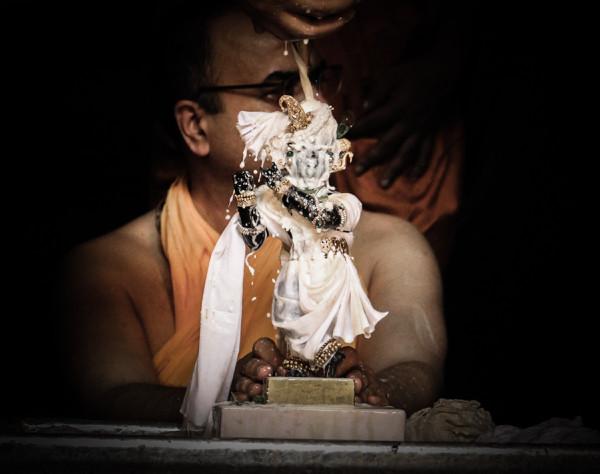 So, in this way, Lord Krishna bestowed his Radha Ramanji form to his devotee to bless him as well as us with his enchanting presence. This God, whom the Goswami Ji called "Sri Radha-Raman Deva, " showed his appearance on the full moon day of Vaisakha (April-May) in the year 1542.

Since then, every year, this day is celebrated with great euphoria and zest. Moreover, this day, the Goswamis of the temple offer 500 liters of milk to the lord and give him a bath in the milk. Besides that, they offer several other sweets and different things liked by the lord for the Lord's pleasure.

Moreover, the appearance place of Sri Radha Raman Ji (below image) can be seen still inside the temple’s region. 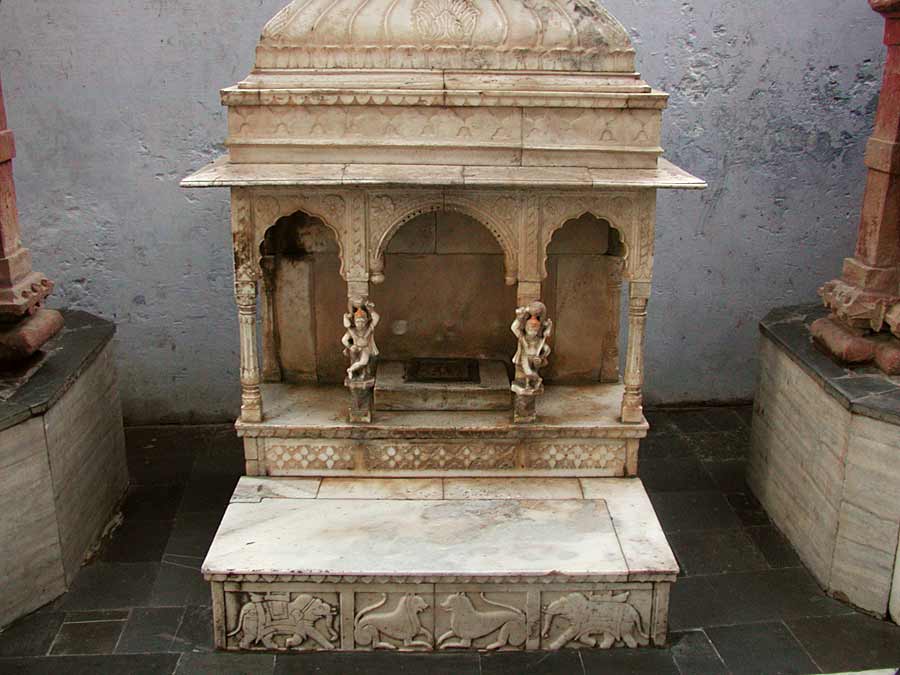 A Magical Fact about Temple 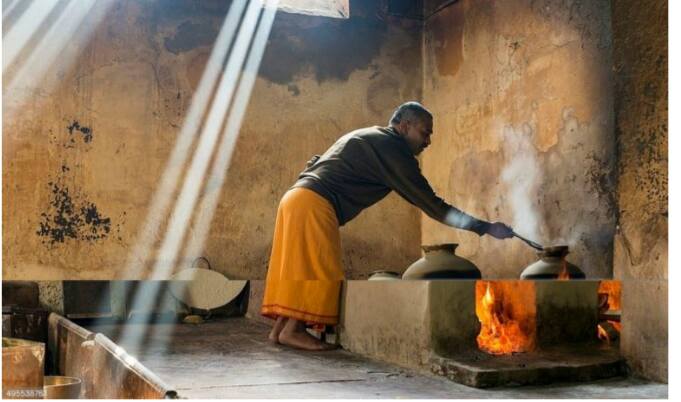 Since the idol was installed that is around 477 years ago, fires for cooking in the temple kitchen have been burning continuously. This is one other mystery of the lord. Hence, no foreign things, including matches and lighters, have thus been used for ignition purposes. 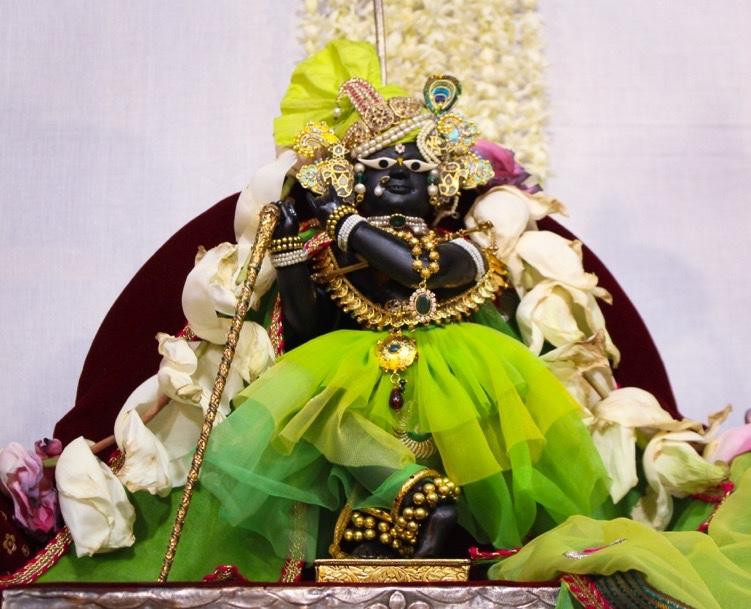 There was a time when Aurangzeb, who ruled over nearly the entire Indian subcontinent for 49 years, attacked Vrindavan as well. The legends suggest that many other deities which are still located in Vrindavan left the town for a while due to fear of attacks from Aurangzeb. But the deity Sri Radha Raman Ji never left Vrindavan since his appearance.

And according to the tale, when Aurangzeb’s soldiers came to Vrindavan near Radharaman Ji’s temple, they believed it to be a residential construction but not a temple. Therefore they did not attack the building.

Some tales also suggests that it was the will of Sri Radharaman Ji as he did not desire to vacate the place where he arrived for his dearest devotee Gopala Bhatta Goswami. 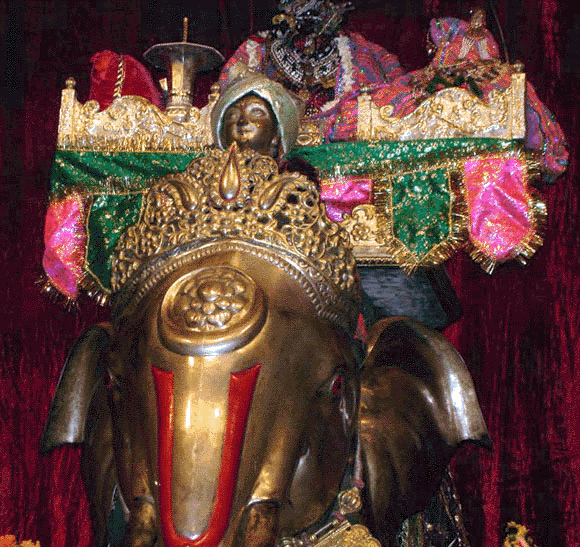 Every year on the occasion of Rama Vijayotsava, also known as Dussehra, the day on which that Lord Ramachandra won over Ravana, Sri Radha Raman Ji performs a victory ride on a huge silver elephant. 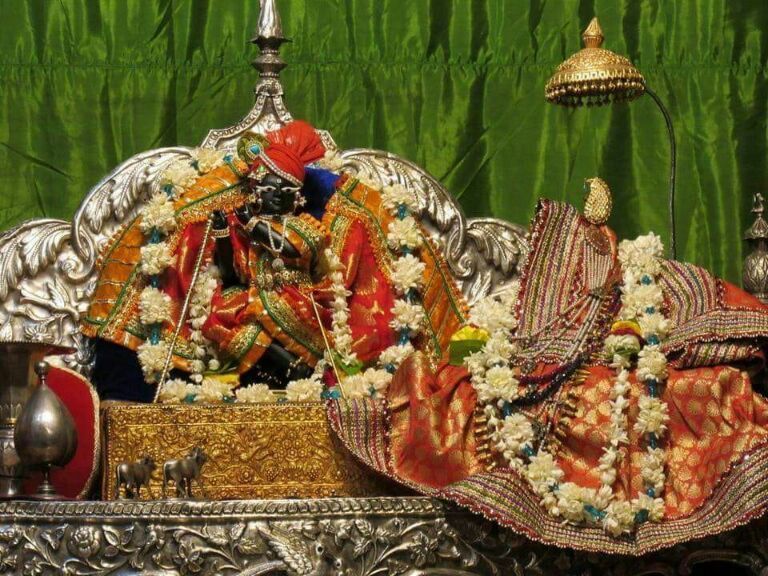 It could be seen that in the picture or the temple of Sri Radha Raman Ji, Srimati Radhika or Radharani (divine consort of Sri Krishna) is there in the left of him, as a crown which has the name of Radharani engraved into it.

And it is believed that in this way, the Goswamis/pujaris worship Sri Radha Ji and Sri Raman Ji together. Moreover, other shells of Gopala Bhatta Goswami (Shaligram-Shilas) are worshipped in the temple today also.

In the memory of Gopala Bhatta Goswami, there is a samadhi of him located next to Radha Raman Ji's appearance place in the temple.

Important Festivals Celebrated in the Temple 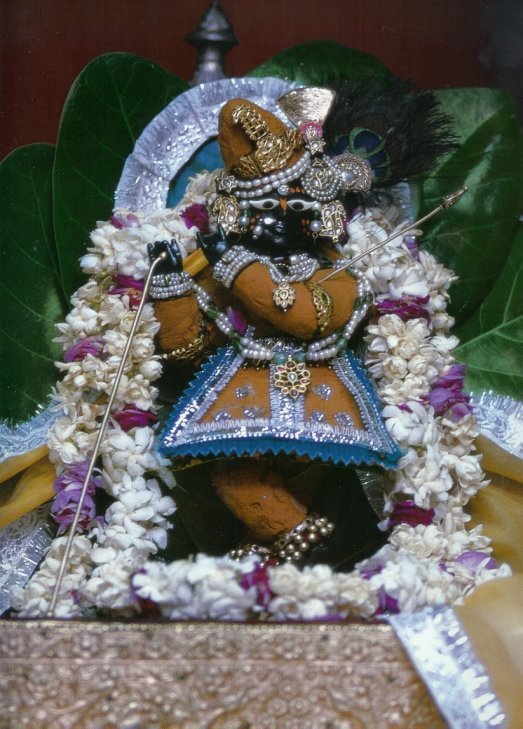 The temple people celebrate the appearance day of Lord Ramachandra, also known as Brahmotsava, in the month of Chaitra (March/April).

In the month of Jyestha (May/June), the deities are coated completely with Chandan (sandalwood paste) which grants them a big relief from the scorching summer heat. Around for 21 days, Chandan Yatra continues with the small deities.

At the beginning of the rainy season in Shravan (July/August), the Swing festival is celebrated. During these days, the small deities are brought out into the temple courtyard on a beautiful gold-plated, solid teakwood swing. A Phool Bungalow (flower house) is also decorated near the swing for the Lord’s pleasure.

The day on which Krishna’s elder brother appeared is known as Balaram Purnima. It is celebrated at the end of Shravan.

In the month of Bhadra (August/September), the appearance day of Sri Krishna is celebrated. From morning to midnight, lakhs of worshippers come to visit Sri Krishna.

Before midnight, first they give bath to Sri Krishna on the altar, and then fabulous “Bhoga” (Food Offerings) and “Aarti” (Prayer) take place.

Fifteen days after Sri Krishna Janmashtami, the appearance day of Srimati Radharani is held. By a half-day fast, the day is celebrated in which “Abhishek” and wonderful feast takes place.

The month of Damodara, also known as Kartika (October/November), attracts pulls the most followers/visitors from throughout the world. In the evening, devotees offer lamps to the deities and chant the glories of the Lord’s childhood pastimes for the entire month, especially on the occasion of Diwali and Govardhan Puja. Moreover, during the month of Kartika, Vraja Mandala parikrama tours around the twelve forests of Vrindavan.

In the month of Magh (February/March), the appearance day of Sri Nityananda Prabhu is celebrated.

On the first day of spring in the month of Magh (January/February), Vasant Panchmi occurs. The Deities of Vrindavan are dressed in yellow outfits which are complemented by beautiful flower decorations on this day. This day also signifies the beginning of Holi celebrations (throwing colored powders on each other) in town, which continues till ‘Gaura Purnima.’

In the Phalguna month (February/March), the appearance day of Sri Chaitanya Mahaprabhu is celebrated. There is a rule of fasting until moonrise on this auspicious day. Besides, a beautiful new outfit along with Abhishek is offered to the Lord. And, this day also signifies the last day of the grand Holi celebrations in Vrindavan town.

Radharaman Ji completed 477 years this year. Hence, it is a time of great enthusiasm and joy for entire Vrindavan and his devotees all across the world.

7 Most Puzzling Mass Vanishings in History That Are Still Unsolved!