Albert Einstein is one of the most popular scientists of all time. He won millions of hearts, are you one of them? 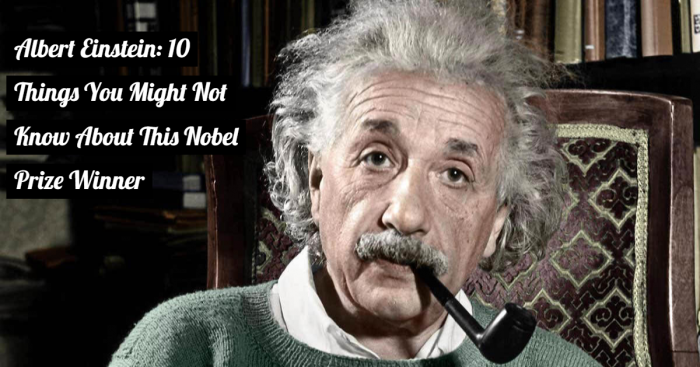 He was born at Ulm in Wurttemberg, Germany on 14 March 1879. His family then moved to Munich, where he began his schooling at the Luitpold Gymnasium. Later, they moved to Italy, and he continued his studies in Switzerland. He started taking training as a teacher in 1896 in mathematics and physics from the Swiss Federal Polytechnic School in Zurich. 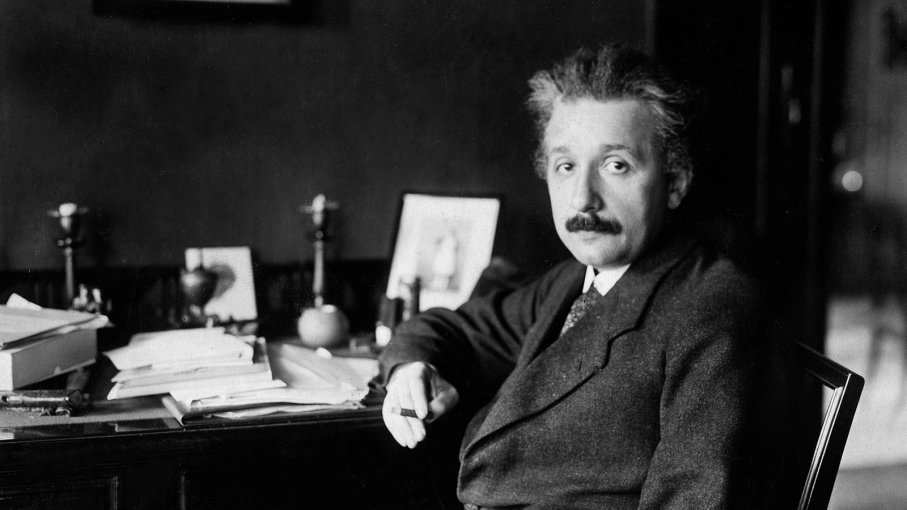 Albert Einstein always had a clear view of the problems that might appear in Physics and had the determination to solve them. He is thought to be a genius and considered one of the world’s greatest thinkers. He was named ‘Person of the Century’ by TIME Magazine in 1999. It was in 1999 when the Gallup poll tagged him as the fourth most admired person of the 20th century. Do you know he was ambidextrous? That means Albert Einstein could use his left and right hand with equal proficiency.

Let us read about Albert Einstein’s journey and how he invented different scientific theories.

Albert Einstein was a Little Different from Other Children 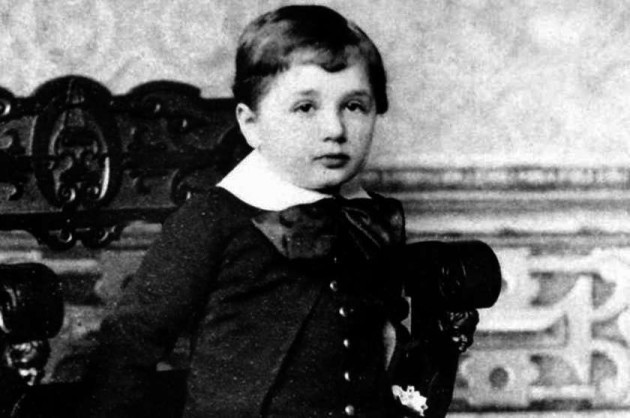 He was born into a non-practicing Jewish family. His parents were Pauline Koch and Hermann Einstein, who was a salesman and an engineer. His family moved to Munich, where his father and uncle started Elektrotechnische Fabrik J. Einstein & Cie, a company that manufactured electrical equipment based on direct current.

He was a little different from other children. Albert Einstein’s head was slightly larger than normal children, and he did not speak much as a young boy. He even didn't start speaking until three years old. Whenever he spoke, he spoke very slowly and tried the sentences in his head until he got them right.

He attended Catholic school and showed his interest in mathematics, particularly calculus. Outside school, he made his path of learning philosophy and mathematics with friend Max Talmud.

When he turned 5, his father showed him a pocket compass. He was mesmerized and became curious to know what force was exerted on it and how it points in a single direction. This question remained in his mind for many years, noted as his beginning with interest in science.

When he was 16, he made his first conceptual breakthrough while looking at the mirror. He looked in the mirror and wondered what he would see if he traveled at the speed of light. His experiment is sometimes referred to as Einstein’s Mirror. He graduated in 1900 and spent two years in searching for a teaching post. Later, he secured a job in Bern at the Federal Office for Intellectual Property as an Assistant Examiner - Level III.

His Most Famous Writing Was a Letter to Franklin D. Roosevelt 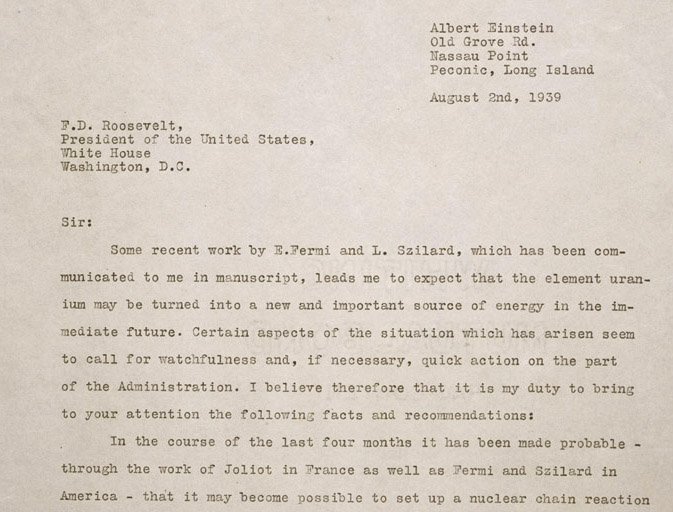 Albert came to the United States in 1933. There, he accepted the position with the Advanced Study in Princeton. At the University, he followed his ideas and did research. He even helped Jewish students and scientists who were forced to leave Germany.

His most famous writing was a letter to Franklin D. Roosevelt. In the letter, he warned that Germany was building an atomic bomb. He wrote a letter after his friend (Leo Szilard) requested him. He also asked Albert to warn the Belgian Queen Mother. During that time, several American physicists doubted the atomic bombs' possibility.

Not many people know that there were two letters signed and written by Einstein to send to President Franklin D. Roosevelt. One was short, and the other was a long version. Unfortunately, the letter did not have a strong impact, and WWII was started on 1st September 1939.

Recently, he came into the news when the Union Minister Piyush Goyal incorrectly attributed Newton’s Law of Gravity to Albert Einstein. He was trolled by the public. However, he later accepted his mistake and got back to the trollers who made his fun.

I hope you know everything about Albert Einstein’s theories. If not, read some interesting facts about him. Albert Einstein did not speak until the age of three. He told this fact about speech disability to his biographer. Stanford Economist Dr. Thomas Sowell coined this controversial term ‘Einstein Syndrome’ to describe exceptionally bright people who couldn’t speak up to 3-4 years.

2. He Alone is Not Responsible for This Famous Equation E=MC^2 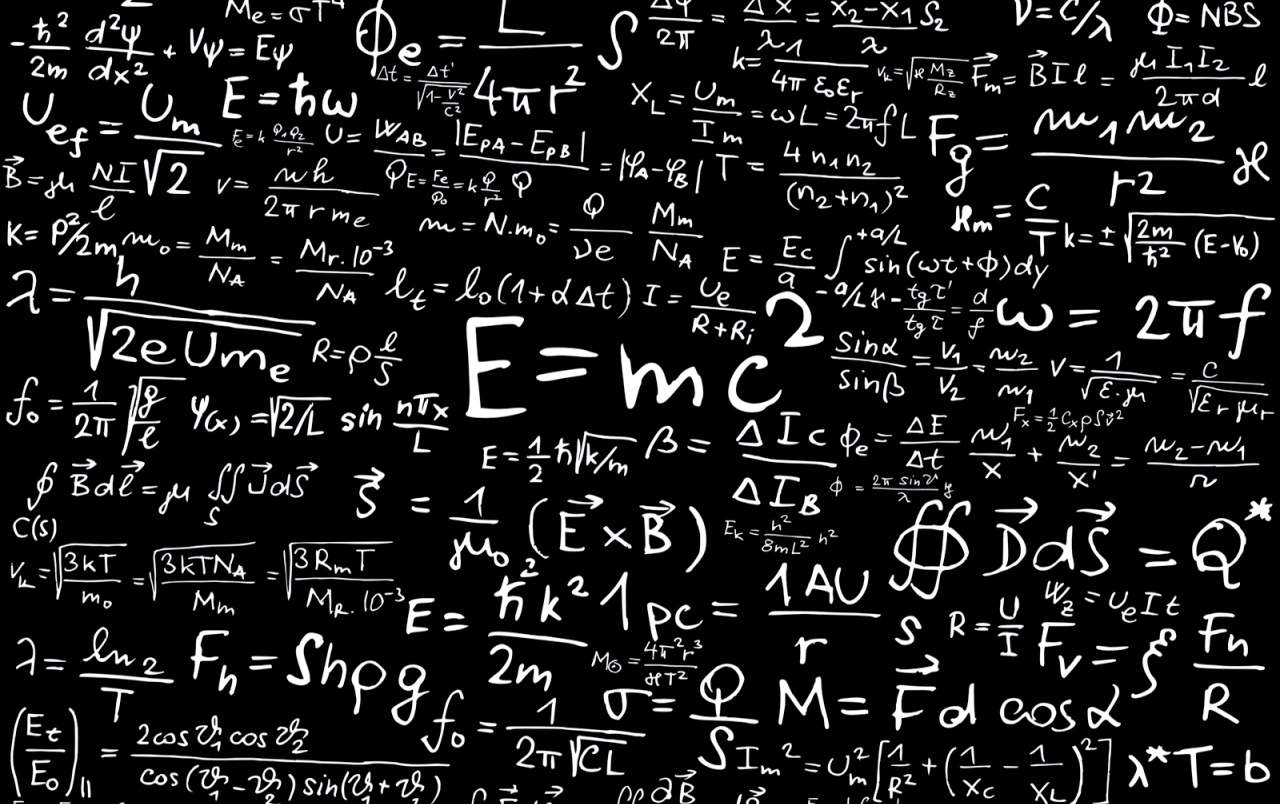 You would be surprised to know that the suggestion of equivalence between energy and mass was proposed by several scientists including Henri Poincaré, Oliver Heaviside, and Friedrich Hasenöhrl, even before he published this theory in 1905.

The equation was out in a slightly different version, Albert simplified the equation and put it into the form (E=MC^2) that made him famous.

Wow! I didn’t know that.

3. Einstein Mastered in Integral and Differential Calculus Before He Turned 15 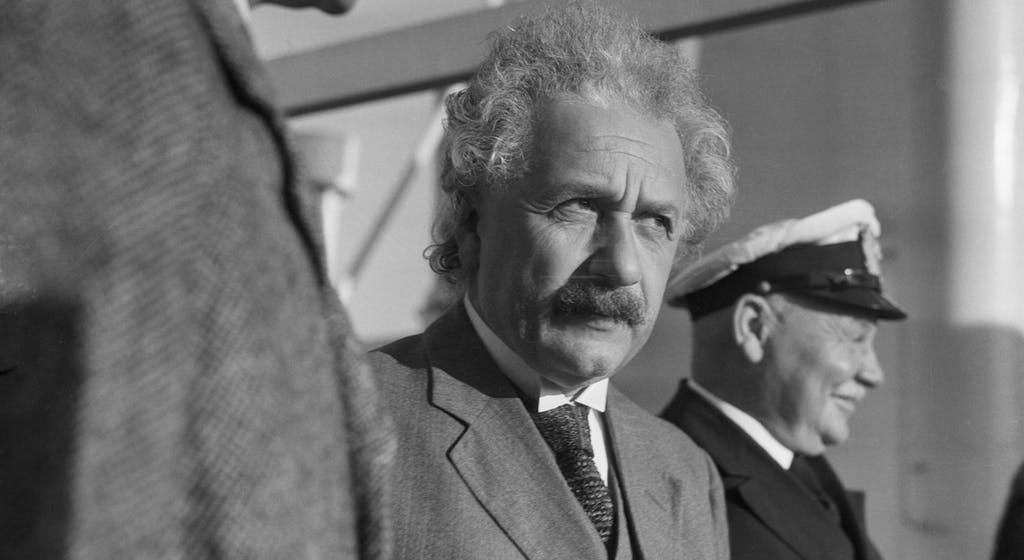 You might have read in books that Albert Einstein was not at all good at maths, but the records show that he was an outstanding student, Einstein scored high grades during school and was only disappointed by the mechanical discipline what his teacher asked for. He said-

“I never failed in mathematics. Before I was fifteen I had mastered differential and integral calculus.”

His sister revealed that by the age of 12, he had a predilection for solving mathematical problems. However, he was more interested in Physics than in Maths. No doubt he was a child prodigy who still inspires individuals.

4. He Offered Nobel Prize to His Wife as a Divorce Settlement 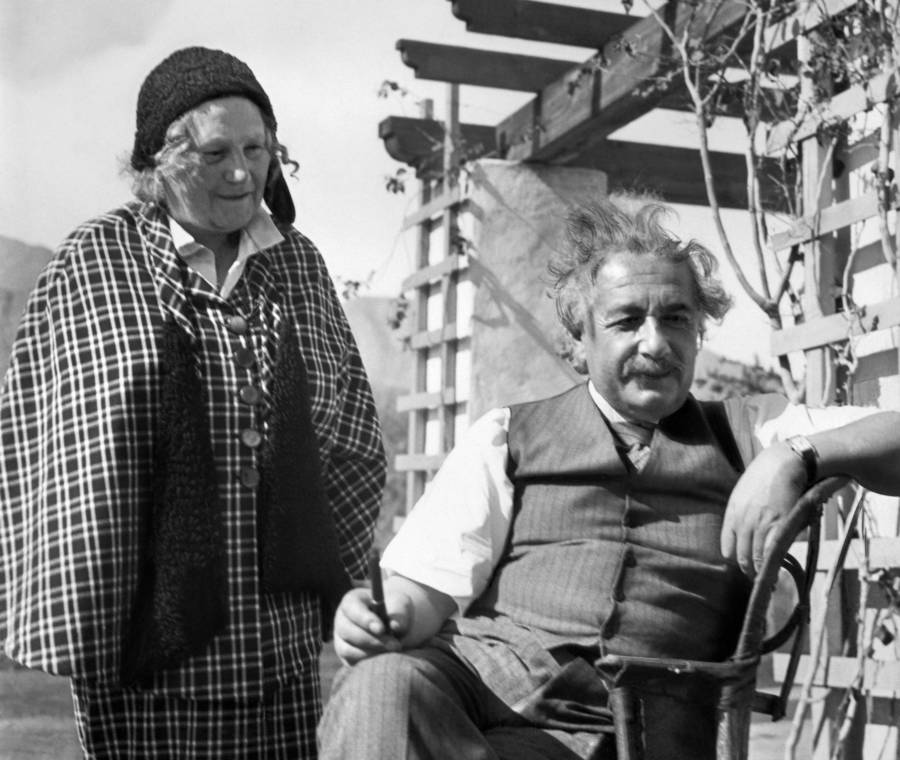 Albert Einstein and Mileva Maic got married in January 1903. It was in 1904 when their son Hans Albert Einstein was born in Switzerland. In 1910, the couple was blessed with second son Eduard. The duo moved to Berlin in 1914, but when his wife got to know about Albert’s romantic affair with his second cousin Elsa, she returned to Zurich with her sons.

The couple got divorced on 14 February 1919. As a part of their divorce agreement, he promised Mileva an annual stipend along with the money he received from the Nobel Prize. He was confident that he would get the prize. She agreed and received the entire money he got from the Nobel Prize. He received the award for his outstanding explanation about the photoelectric effect. Elsa then remained his wife until her death in 1936.

5. He Was Offered to be the President of Israel 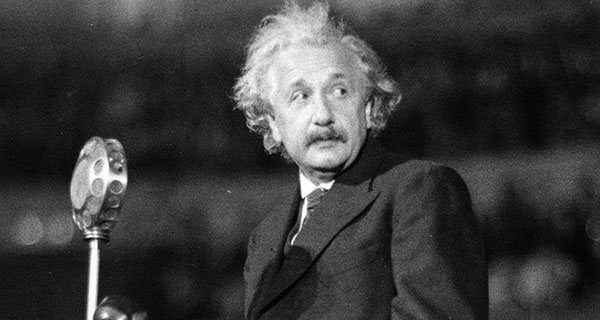 He was not much religious but had a deep connection to his Jewish heritage and most of the times spoke about anti-Semitism. He wrote in a letter:

“All my life I have dealt with objective matters, hence I lack both the natural aptitude and the experience to deal properly with people and to exercise official function.”

6. His Brain Was Stolen After His Death After the death of Albert Einstein in 1955, his body was cremated and ashes scattered. He died from an abdominal aortic aneurysm. The only part of his body that was retained by Thomas Harvey (pathologist) while conducting the autopsy was his brain. He kept the brain in a hope to discover the secrets of this genius. He later cut the brain into two pieces and sent to several scientists for research.

Several studies were performed on it since the 1980s, but most of them were discredited. It was in 1999 when a team from Canadian University claimed that Einstein possessed unusual folds on his parietal lobe and was associated with spatial ability. Thomas Harvey was fired from the hospital for not returning his brain.

His brain was removed within seven hours after his death. The research suggested that his brain had a high number of glial cells per neuron, which could be the reason behind his unusual conceptual skills.

His son Hans Einstein approved the removal of his brain for scientific research and publishing. But some research claims that the brain was removed without the permission of him or any  immediate family member.

7. He Invented Refrigerator WIth His Student But was Overshadowed by Freon Based Compressors 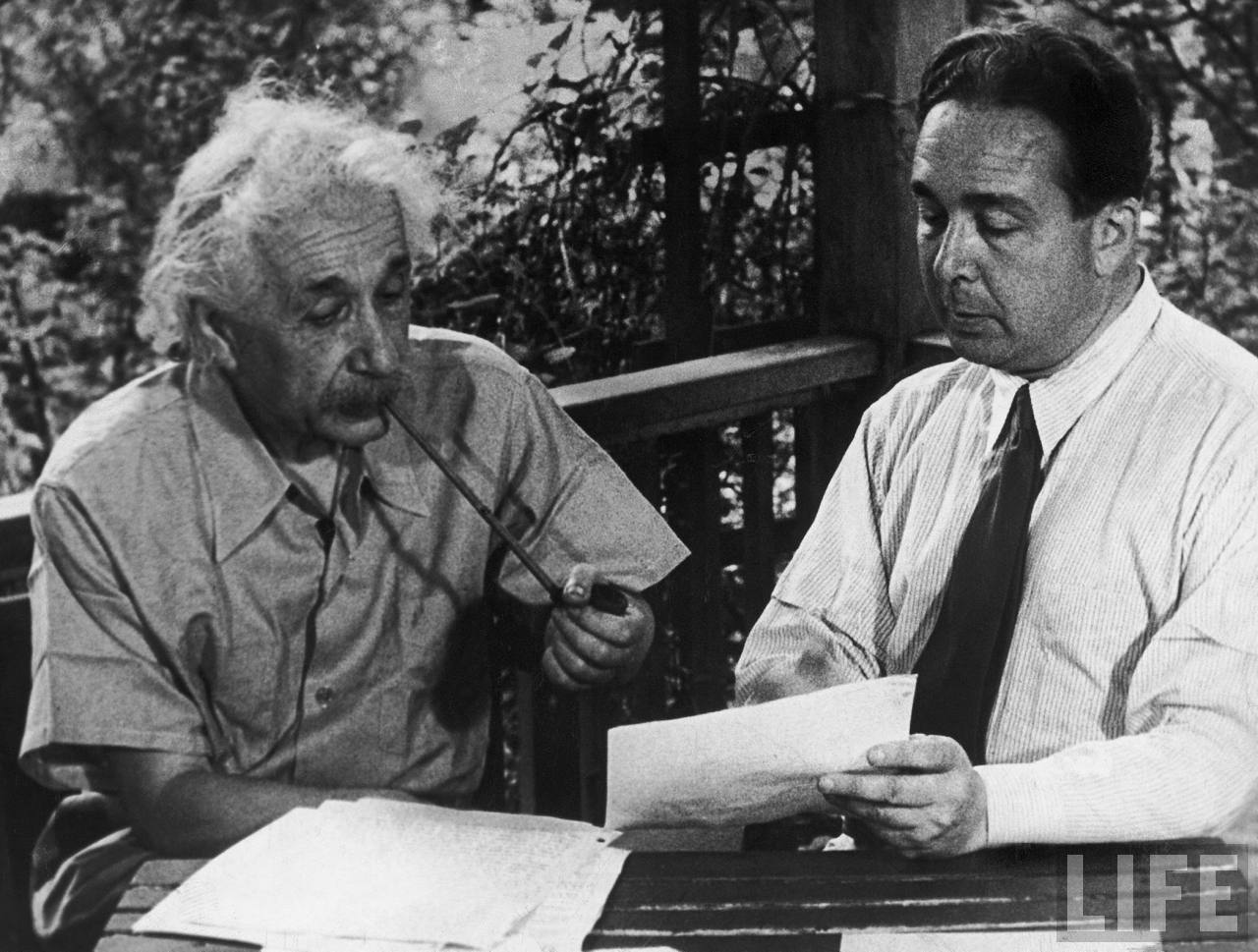 Two decades after publishing the Theory of Relativity, he invented the refrigerator with his former student Leo Szilard. The refrigerator worked on compressed gases. He created this device after reading about a family in Berlin that was killed by toxic fumes from the fridge. Their refrigerator was soon overshadowed by Freon based compressors that were more effective.

If you do not know what his theory was, read this article to understand his Theory of Relativity easily.

8. He Failed in Other Subjects Besides Maths and Physics 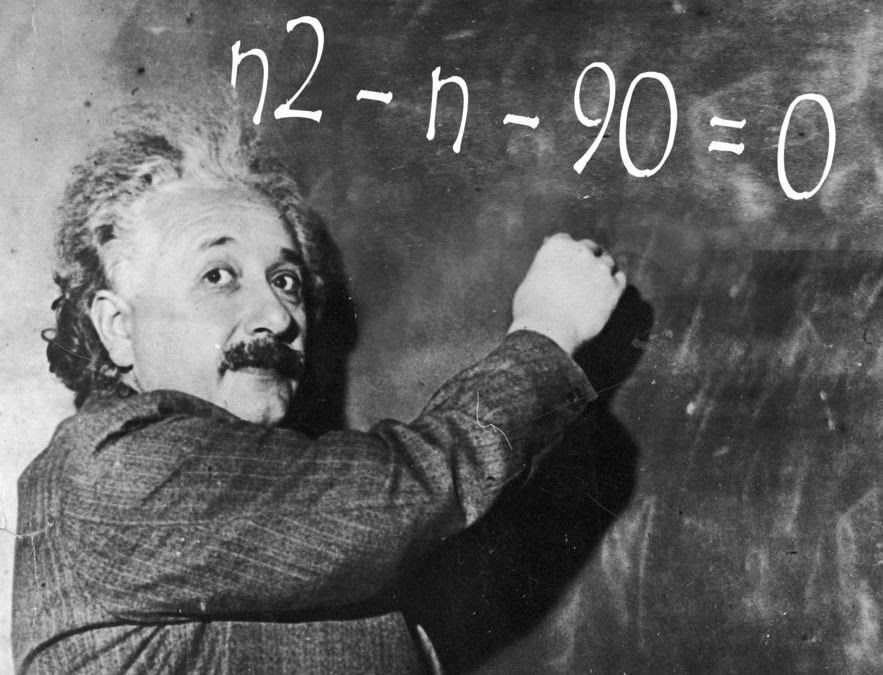 He was very interested in Physics and Mathematics and showed his talent in both, but failed in other subjects of the entrance exam. It was in 1895 when Einstein gave the entrance exam for the Swiss Federal Polytechnic in Zurich.

He failed to qualify the minimum marks required for admission but did well in Maths and Physics. He then went to a trade school before he retook the exam and finally got admitted to Swiss Federal Polytechnic a year later.

9. He Developed a Love for Music at Very Early Age 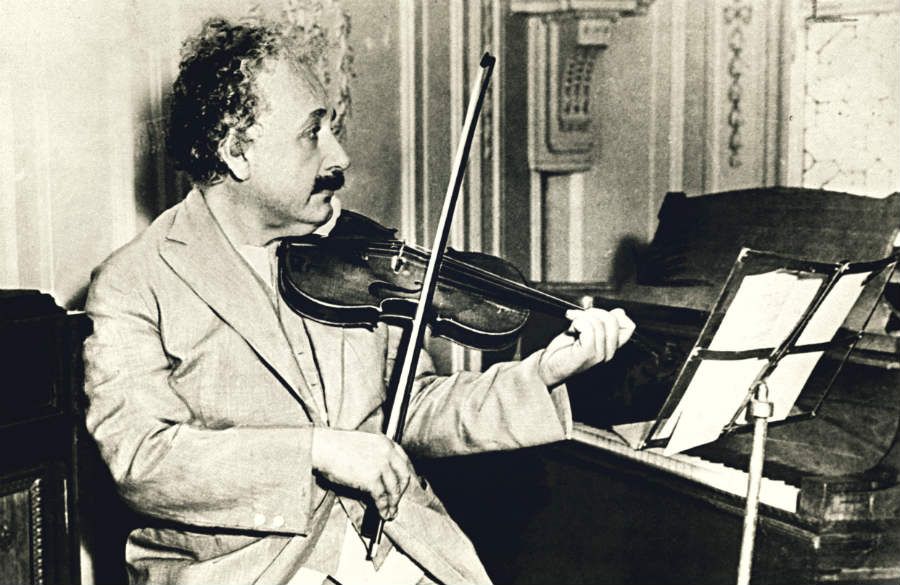 He developed a love for music at a very young age, He even mentioned –

“If I were not a physicist, I would probably be a musician. I often think in music. I live my daydreams in music. I see my life in terms of music... I get most joy in life out of music.”

Albert Einstein’s mother was a pianist and wanted her son to learn violin.  Initially, he hated to play the violin, but when he turned 13, he changed his mind about the violin lessons after he heard the music of Mozart. Later he learned without ‘ever practicing systematically.’

Although the idea of turning into professional was not on his mind, he played chamber music with several professionals and even performed for friends and audiences.

10. He Could Not Swim But Loved Sailing 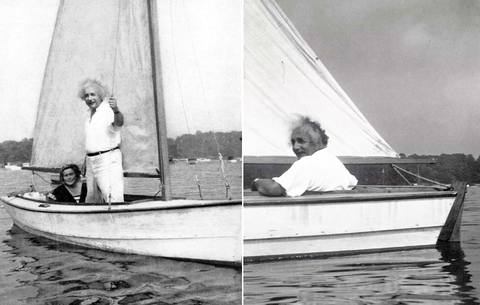 Another interesting fact about Albert Einstein is that he hated to wear socks.  He thought wearing socks was a pain and also got holes in them. He never learned to swim but loved sailing and continued to do so throughout his life.

Einstein was also an avid smoker. He believed that “pipe smoking contributes to a somewhat calm and objective judgment in all human affairs.”

Albert Einstein was no doubt the best mathematical and physicist of the 20th century. He was not the best in all subjects but won a Nobel prize for all his remarkable accomplishments and research. Einstein alone is not praised for his intellect, know more personalities who are followed for their great minds throughout history.

He is one of the greatest people who was even threatened with death for his convictions and beliefs. But he continued to search for the laws that would describe more about the parallel universe. Today, his theories are followed and helping the researchers in making a great impact on the universe.

This was all about Albert Einstein’s life journey, accomplishments, and struggles. Did he inspire you with his theories? Do you know other things about him that are not listed above? Drop your comments below.