In the era where schooling is highly expensive, this is the school in India which charges students in plastic instead of money for education. Isn’t it strange? Know more about the school here! 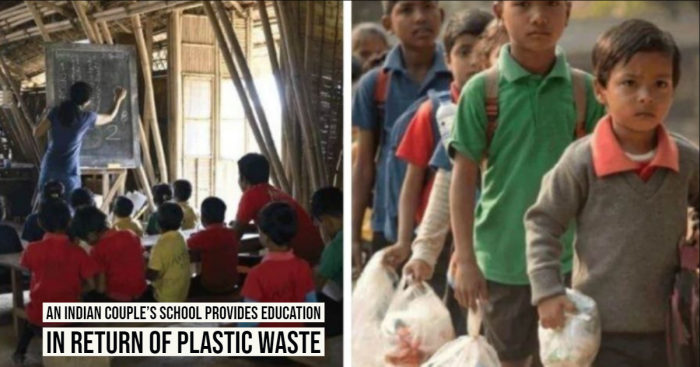 Needless to say that plastic pollution, the accumulation of plastic objects in the Earth's environment, is increasing day by day. And, most importantly, it is adversely affecting wildlife, wildlife habitat, and humans at a high rate. Not only land but an increase in plastic waste is also affecting waterways and oceans the most.

However, certain people started to look for positive initiatives for changing the current tragic state that we are living in. Yes, there are examples which are proving all hope isn’t lost to save our planet. And, one of those great examples is this Indian couple who operates a school that charges students in plastic instead of money for education and also transforming the entire town. Let’s know more about it!

About Indian Couple Who Took This Initiative 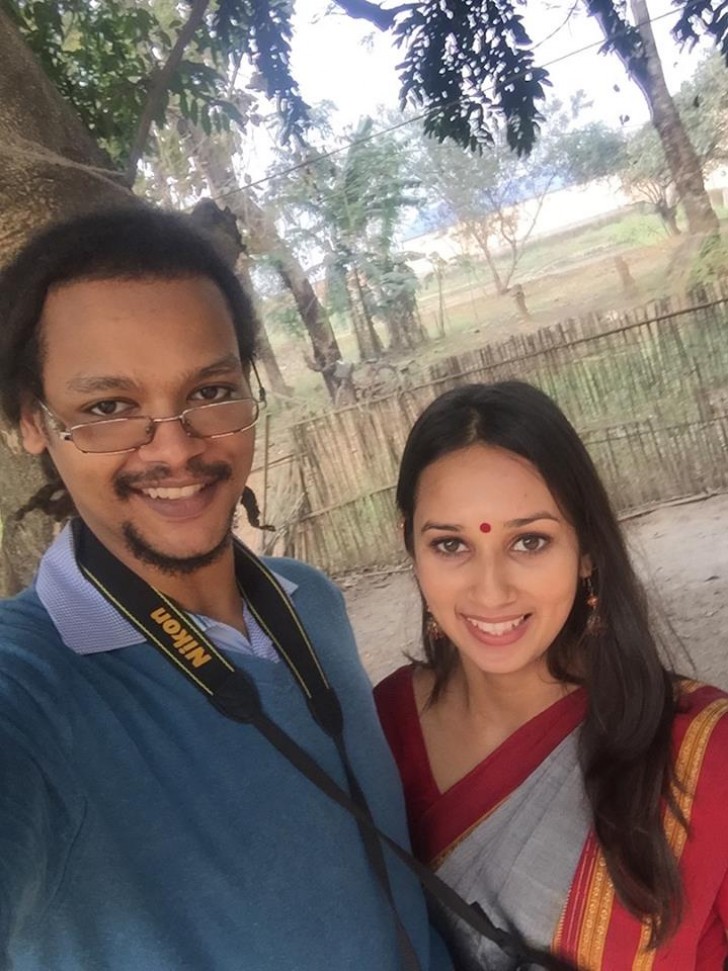 Here we are talking about Parmita and Mazin, one other great couple same as the Brazilian couple who restored a destroyed forest. But here, the story is a little different.

Parmita & Mazin is the Indian couple that created this unconventional school in India where students carry bags of plastic every day on their way to school. Shocking but true!

Mazin had arrived in India from New York back in 2013 on a different school project. Due to his work, he later met Parmita, who was a Master’s student in Social Work at the Tata Institute of Social Sciences (TISS). And coincidentally, she was also planning to work in the education sector.

Before this school was established, most of these children worked as laborers in the local stone quarries. But the founders began to increasingly attract more children to school because of their focused curriculum and a passion for teaching and bringing the community together. They started with 20 children at first, but now they have grown to 110.

Akshar Foundation's revolutionary model gives underprivileged students all the skills they need to build productive lives for themselves.

It was started in June of 2016  by Parmita Sarma and Mazin Mukhtar in the northeastern Indian state of Assam on the southern boundary of the Himalayas.

Apart from regular studies, the foundation teaches students how to take responsibility for their environment and how to improve it.

And, this school became the first one where students pay their "school fees" in the form of clean plastic waste from their homes. Also, they let students participate in the school Recycling Center while learning environmental science.

​How They Got the Idea? 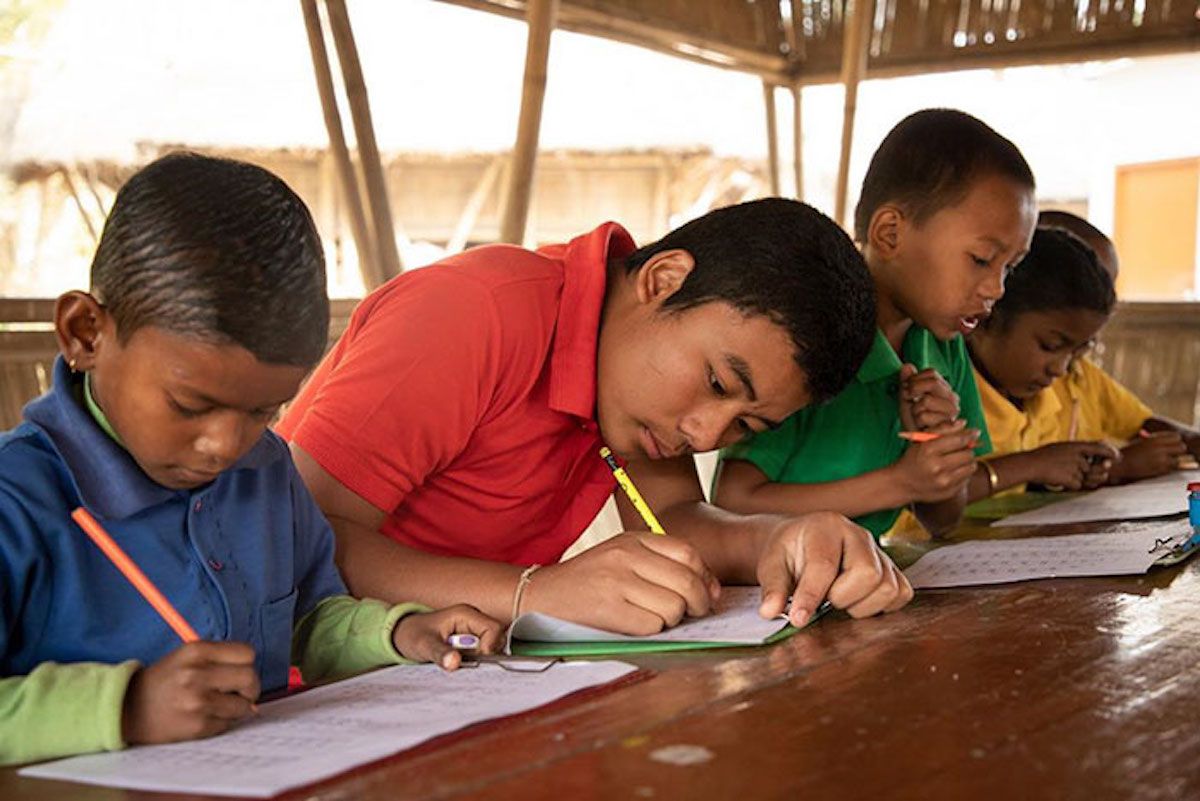 According to Sarma and Mukhtar, the key moments that led to the idea of recycling was when their classrooms would fill with toxic fumes as people nearby would burn plastic waste during the winter to keep their place warm.

They said that it was common in their area. Families there collect waste, including plastics and then burn piles to keep their place warm during the winter, not knowing of the serious environmental and health harm from such a method.

Hence by looking at such a situation, the couple was determined to make a positive change within the community both educationally and environmentally. Hence, they began to encourage their students to bring plastic waste as a form of tuition since many of them struggled to afford the fees required to attend school. 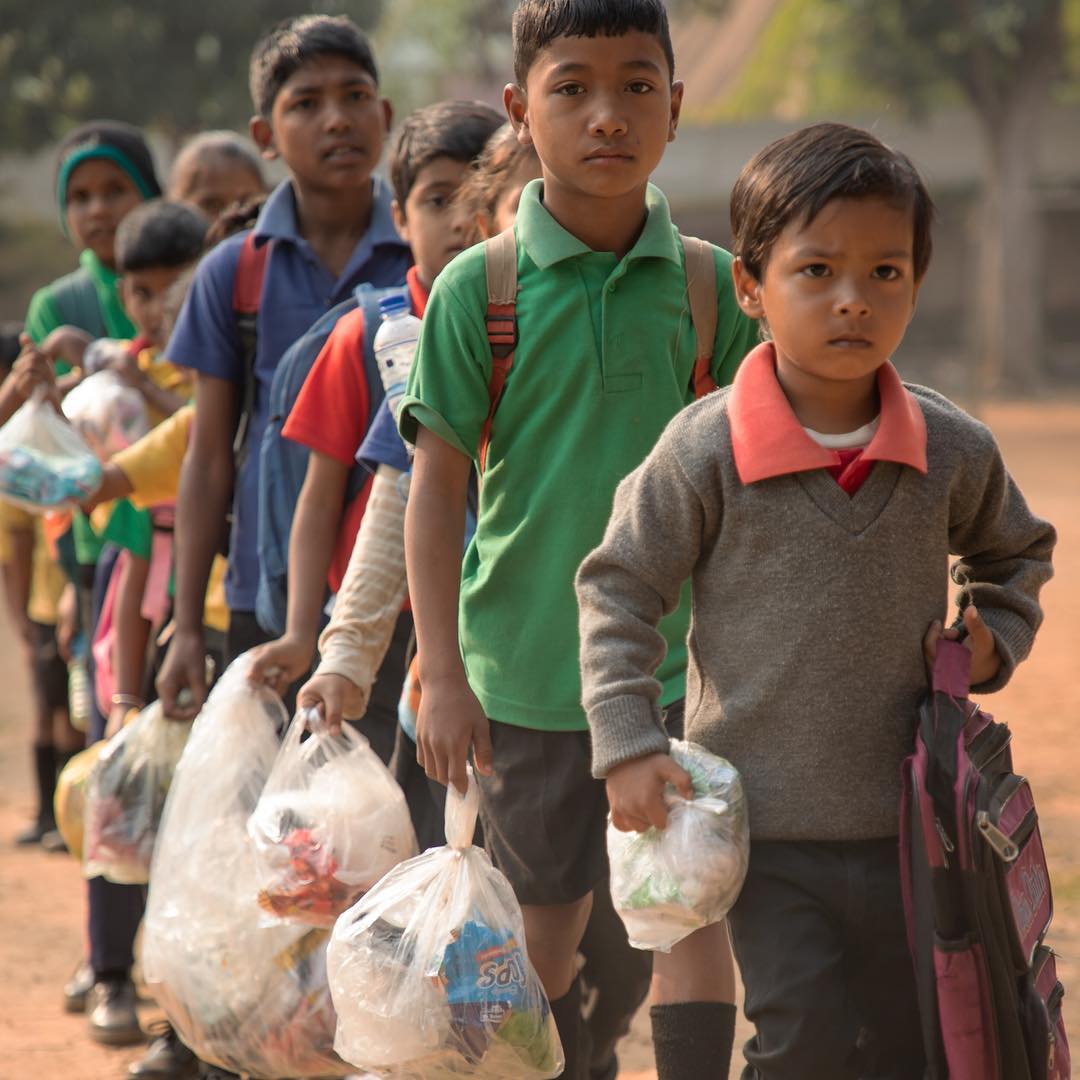 In an interview, Mazin Mukhtar, the Co-Founder of the school, mentioned that he & his wife together came up with the idea.

“We were both already dreaming of starting a new kind of school specifically designed for children in poverty. We formed Akshar that same year we met and we started our school, Akshar Forum, in 2016.

When we started the recycling center, parents were not cooperative at first. So we came up with the “Plastic School Fees” idea to compel the parents to recycle. The school was free for years before we started that policy. In reality, it’s more like mandatory homework than school fees but calling it plastic school fees serves to remind the parents: the school is entirely free but the least you can do is help us and help yourselves by sending your clean, dry plastic waste from home.”

In addition to that, Parmita Sarma, one of the school founders, said,

“We wanted to start a free school for all but stumbled upon this idea after we realized a larger social and ecological problem brewing in this area. I still remember how our classrooms would be filled with toxic fumes every time someone in the nearby areas would burn plastics. Here, it was the norm to burn waste plastic to keep warm. We wanted to change that and so started to encourage our students to bring their plastic waste as school fees”

How Do They Work? 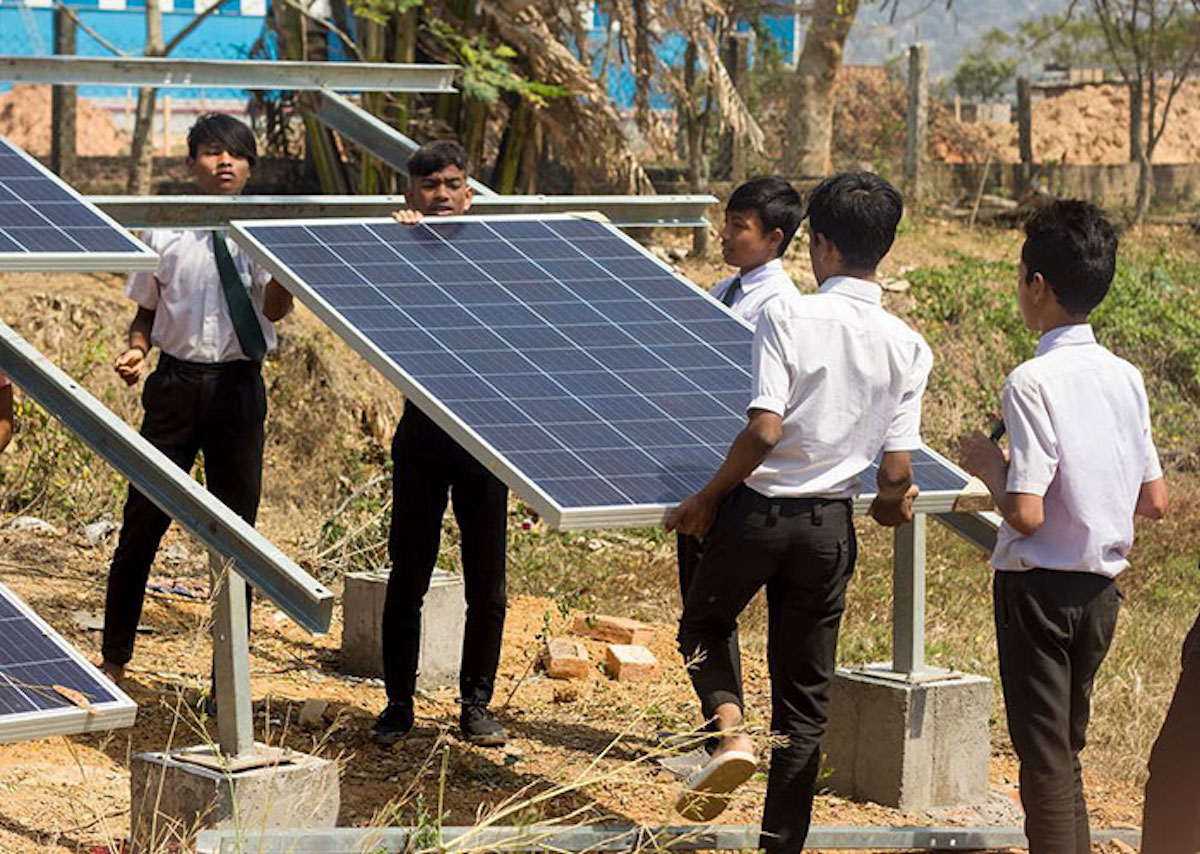 As we mentioned earlier that before the school established, most of the children worked as laborers in the local stone quarries. There they would make around $2.50 a day.

However, the school can’t pay to children. Hence, they found an alternative. Akshar Foundation allows older students to teach younger ones. Instead of money, those young teachers earn toy currency notes that let students buy snacks, clothes, and papers. Hence, it was a learning experience for the school as well.

Moreover, those young ones can also ask their teachers to buy something online if they need anything from there. So the teachers order anything the student wants from Amazon by changing their earned notes to real money.

Meanwhile, the Akshar Foundation teaches their students and parents about the adverse effects of plastic usage. Parmita said that before the parents got the awareness, they used to burn plastic to warm their homes.

She added that they were shocked to learn about the hazards they were exposing their children to once the school started educating the community. 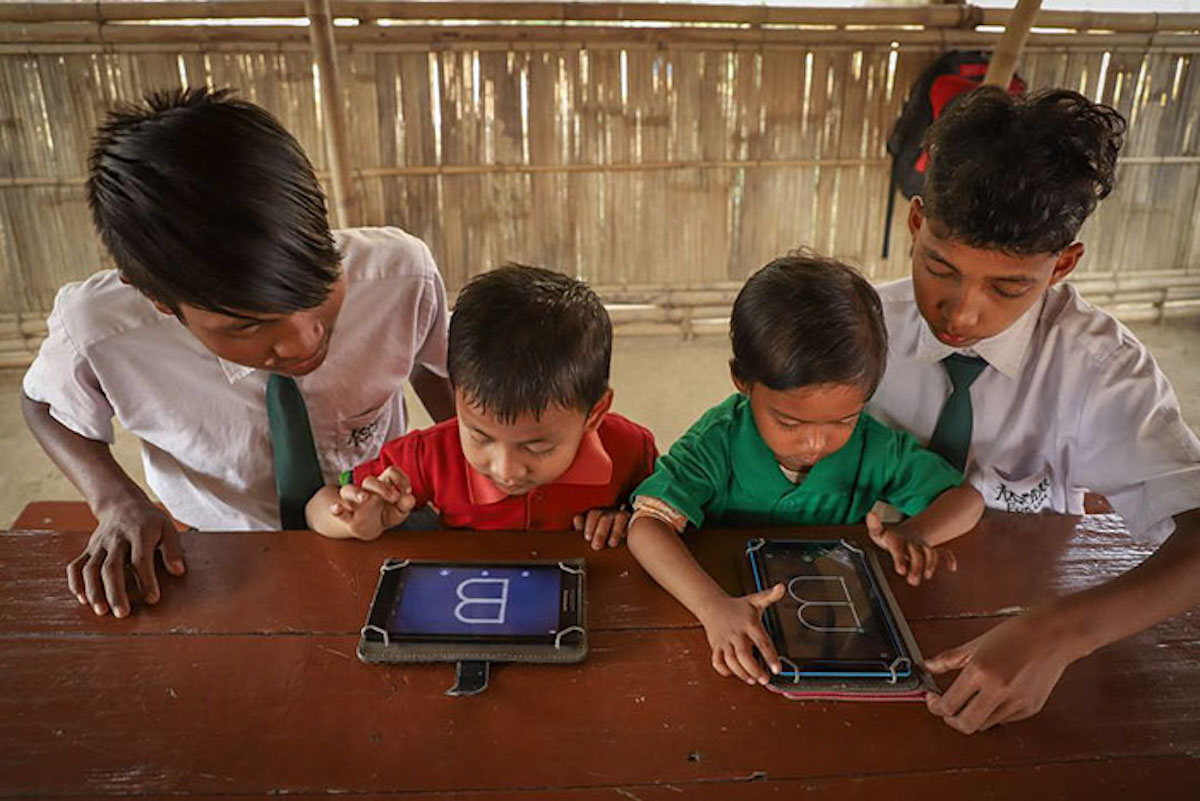 While speaking about the teaching methods at school, Mazin said,

“We use child labor to fight child labor – kids in poverty need to earn money to stay in school, learning and earning. We employ children as tutors and social workers. This ensures that younger children receive daily tuition from an older, caring student.
Our students learn more to earn more – we pay them based on their skills and knowledge, and fine them for bad behaviour. As students move from one grade level to the next, their wages increase. Also, wages increase with teaching skill. Students are strongly incentivised to behave like model students.”

“Place every student directly into a career – kids stay in school until the school finds a career for them — via college or apprenticeship in a high skill trade. Teens develop vocational skills, in addition to teaching, during the critical 12-18 age group. Students learn English, Math, and Science, but in secondary school, the curriculum incorporates Carpentry, Embroidery, Recycling, Photography and soon, a more developed Solar Technician course. We are developing a “School-to-Career Pipeline”.
Charge them plastic school fees – teach them to be responsible for their surroundings. If every school does this, it can impact the plastic crisis. Students learn to address the problems afflicting their communities, and they develop machines and inventions as part of their coursework to address the problems.” 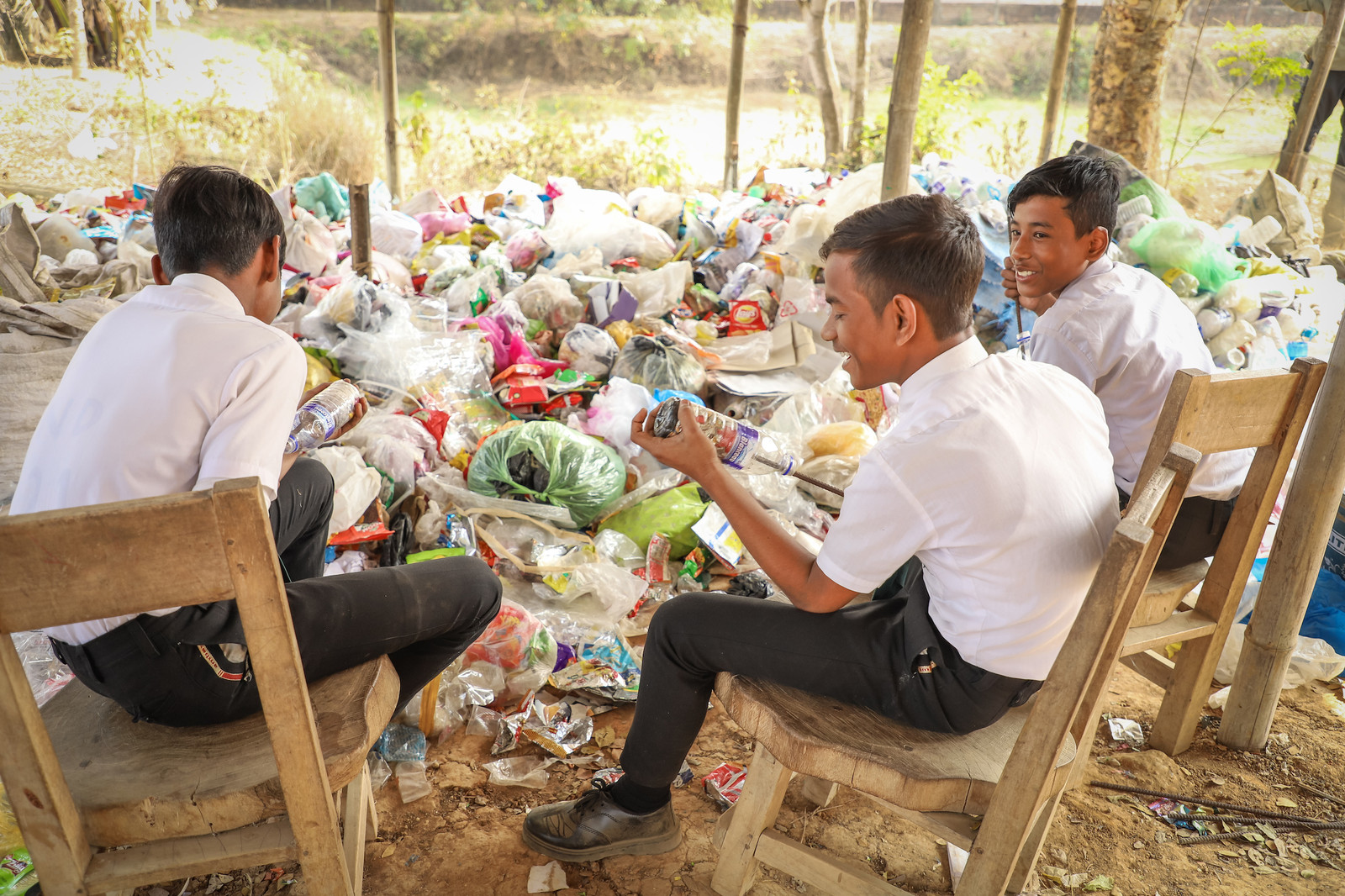 Per week, around 25 pieces of plastic waste every student brings as their contribution to the community.

“Initially, most of our teenage boys were dropouts and child laborers. Now, they earn money in school by teaching during school hours and operating our Recycling Center after school.”

Among all these students, some of the at-risk teens are employed to compress dozens of plastic packets into plastic bottles to make “Eco-bricks.” Such Eco-bricks are utilized for construction work by fixing them with cement.

It can be seen that in the picture of the small tree planter below, they used roughly 200 plastic bottles and 4,000 plastic packets ( half of them were non-recyclable). 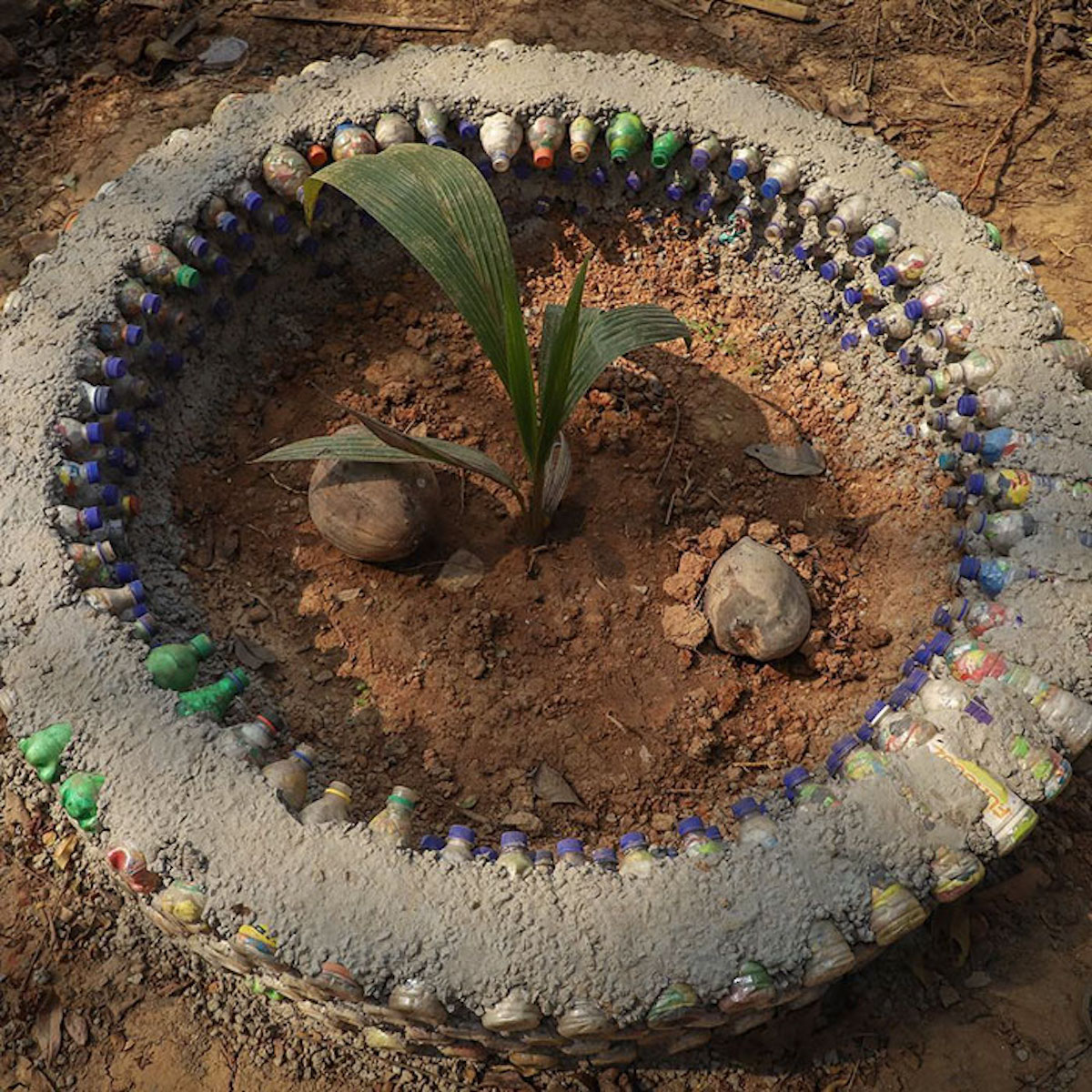 “Next, we plan on building a dedicated girl’s toilet using a combination of normal bricks and Eco-bricks.”

At last, Parmita and Mazin, the couple that created this school, said that they aspire to create 100 schools like this across India in the future.

Watch This Video to Learn More about the Foundation:

Hats Off to the Couple!

The Untold Story of Dadaab - The World’s Largest Refugee Camp