La Voiture Noire: World's Most Expensive Car Ever Gets Sold in $18.9 Mn 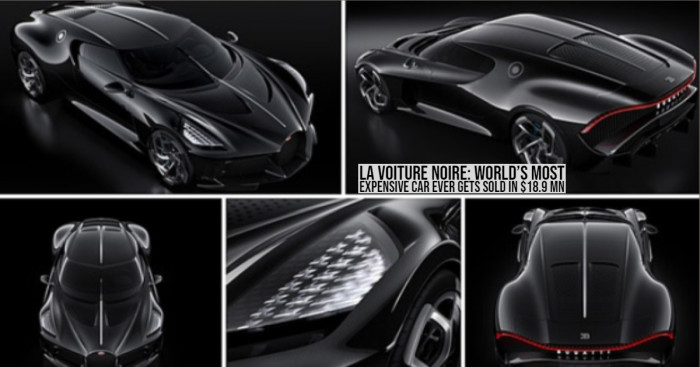 Since 1909, BUGATTI has always been defined by the spirit of its founder Ettore Bugatti who begun the exceptional journey of the BUGATTI brand in Molsheim, France. And it’s been 110 years now with a long history, full of passion, dynamics, craftsmanship, and elegance.

No wonder, Bugatti is known for making the world’s priciest cars. And, now it has introduced the most expensive car ever. Yes, you have heard it right. Here we are talking about La Voiture Noire which is French for The Black Car. It is also known as a car which even makes the Chiron look "affordable" with only one to be ever produced. It has been said that this was the automaker’s 110th birthday present to themselves. However, they happily sold it for $18.9 million after taxes and fees were added to its 11 million euro base price.

While introducing the car, they posted a tweet along with the caption,

The Bugatti La Voiture Noire was first revealed at the Geneva Motor Show whose coupe is based on the brand’s $3 million Chiron supercar. Moreover, it features an 1149 hp quad-turbocharged W-16 engine. And, best of all, its modern shaped carbon fiber body was designed to evoke the styling of the legendary Bugatti Type 57 SC Atlantic.

Well, Bugatti is keeping La Voiture Noire's interior a complete secret as it hasn’t released photos of the cabin or not even the photos leaving the vehicle's door open on the Geneva Show stand. However, we can say there's at least enough space to allow someone to drive it as the car can be seen driving in this video even at very low speeds.

Its powertrain comprises the same quad-turbo W16 8.0-liter engine making 1,500 horsepower and 1,180 pound-feet of torque as the Divo and Chiron.

While talking about the car, Designer Achim Anscheidt commented the journalists at the Geneva Motor Show,

He further stated that the Chiron has an electronically limited top speed of 261 mph, but it’s not known to anyone that how the unique shape of La Voiture Noire affects that.

Moreover, the publication declares that it is one very rare vehicle which will have the "exact inverse value curve of a regular car: it'll start to appreciate rather than depreciate the moment it’s delivered."

First Sketches of the Car It has been reported that the car La Voiture Noire pays homage to the Bugatti Type 57SC Atlantic which was earlier designed by Jean Bugatti who was the eldest son of founder Ettore. Here we can look at the first sketches of the car.

As the 57 Atlantic also had an iconic all-black variant which went missing during the Second World War; therefore, the new La Voiture Noire is also all-black paintwork.

They posted these pictures with the caption,

According to Bugatti designer Etienne Salome, every component of the Bugatti La Voiture Noire has been handcrafted, and the complete carbon fiber body has a deep gloss black finish. Also, he stated further that the material is handled perfectly, and the design was worked upon until nothing could be improved.

As we can see, the design of the Bugatti La Voiture Noire seems almost evil, much like Darth Vader, but equally attractive. Moreover, with the ultra-wide taillights extending from side-to-side, the rear almost floats over the exhausts.

In an interview about the car, the luxury brand stated that this jet black sports car comes with a 16-cylinder engine, 1,500 horsepower, and six tailpipes. But for the car, buyers must have €16.7 million or $18.9 million lying around. If they have, it’s already been sold. There is no doubt that the one-of-a-kind creation was handcrafted for a collector who probably identifies with the expression of the company’s Founder Ettore Bugatti:

"If it is comparable, it is no longer Bugatti.”

Who is the Buyer? 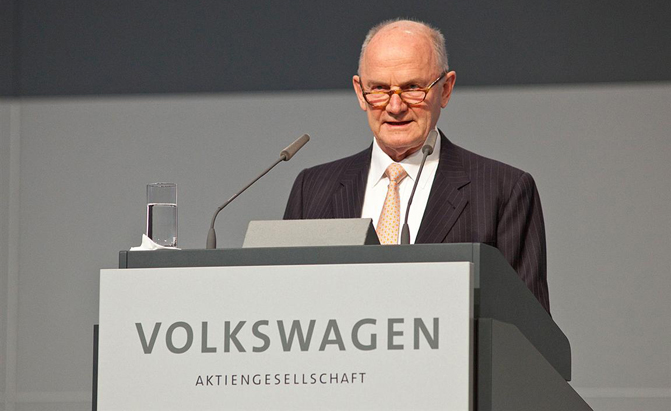 As mentioned,  the one-off La Voiture Noire costs 16.5 million euros. And, according to some sources, the buyer of La Voiture Noire is rumored to be former Volkswagen Group boss Ferdinand Piëch who spearheaded the resurrection of the Bugatti brand when his company purchased it in 1998. The buyer  is officially described as a “Bugatti enthusiast.”

Most importantly, the unnamed owner of the most expensive Bugatti ever will be receiving the finished model almost two and a half years later. In these two years, the company will be homologating the Bugatti and will also work on its designing to make it road-legal. No wonder that this car is as rare as it can get, nothing short of a piece of art.

Even though Bugatti has not disclosed the buyer of the black car,  but as Motor Trend wrote in its initial judgment:

“As the black car sits, the thing is further proof that now more than ever, it’s good to be filthy, stinking rich.”