Check out the list of legendary creatures from Greek mythology with their powers and unrevealed stories.

Legendary creature, also called fabulous creature, is a supernatural animal, and sometimes part human, whose existence has not been or cannot be proven and is described in folklore. In the classical era, monstrous creatures such as Cyclops appear in heroic tales for the protagonist to destroy.

Some legendary creatures have their origin in mythology and were believed to be real creatures. Several mythical animals appear in the art and stories of the Classical era. In medieval art, animals played a crucial role and decorative forms such as medieval jewelry. In Christian art, animals carried symbolic meanings.

You must have read about gods of air, food, fire from different mythologies. Let us now know about legendary creatures from Greek mythology and their powers. 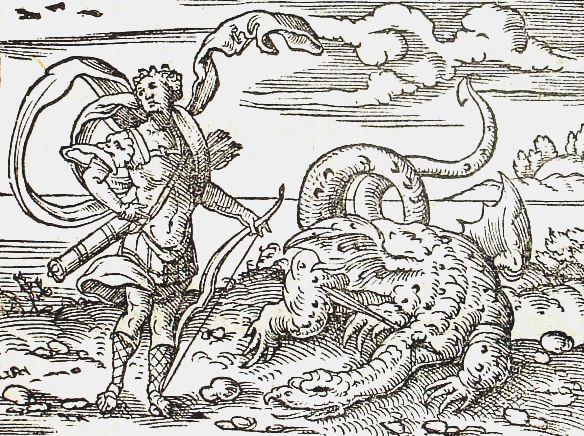 Python became the chthonic enemy of the later Olympian deity Apollo who took over Python’s former home and oracle. Several versions of Pythons’ birth and death can be read at the hands of Apollo.

The version related to Hyginus shares that when Zeus lay with the goddess Leto, and she became pregnant with Artemis and Apollo, Hera was jealous and sent Python to pursue Leto to prevent her from giving birth to the twin gods. The Pythian Games held at Delphi were supposed to have been instituted by Apollo to celebrate his victory over Python. 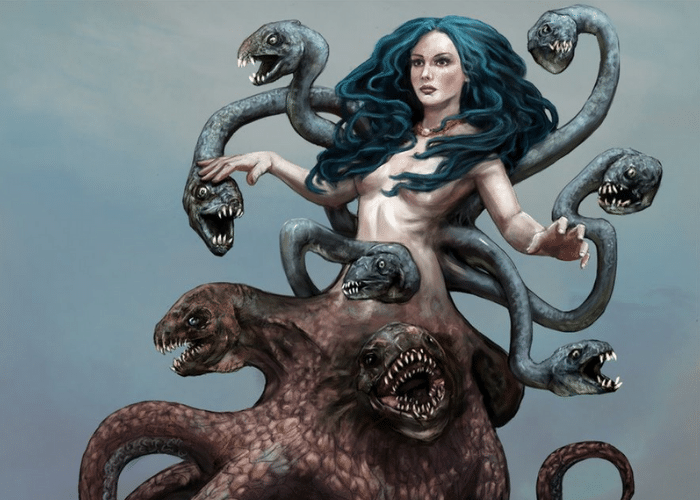 In Greek mythology, Scylla was a monster that lived on a narrow channel of water, opposite its counterparts Charybdis. Scylla is first tested in Homer’s Odyssey, where Odysseus and his crew encounter her and Charybdis on their travels. It is believed that Scylla was a monster with six heads filled with sharp teeth and placed on long necks.

There are several stories of Syclla’s transformation into a monster. One story describes  Poseidon’s wife Amphitrite was jealous of the nymph and poisoned the pool in which she bathed. Another story speaks about Glaucus, who fell in love with her and asked the sorceress Circe for a love potion. Scylla and Charybdis were said to live opposite each other in a pool of water identified with the Straits of Messina between Sicily and Italy. 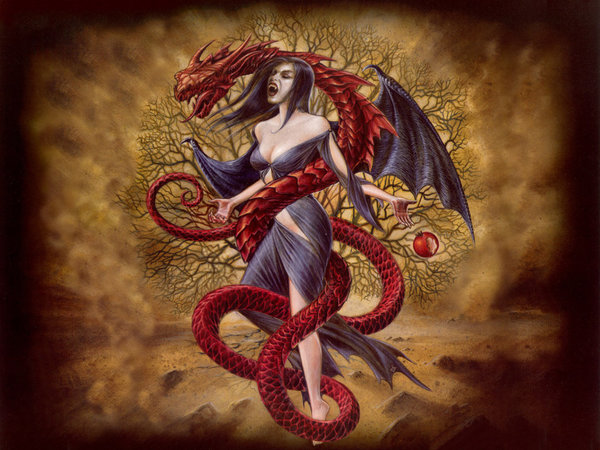 In Classical mythology, Lamia is a female daemon who devoured children. Today, Lamia in Greece is used as a bogeyman to scare children.

In the myth, Lamia was a beautiful woman beloved of Zeus, but after Zeus’ jealous wife Hera destroyed her children or caused Lamia to kill her offspring, she became disfigured from the torment, transforming into a terrifying being who hunted and killed children of others.

According to Genealogy, Lamia was the daughter of King Belus of Egypt and Lybie. By the early middle ages, Lamia was being glossed as a general term referring to a class of beings. 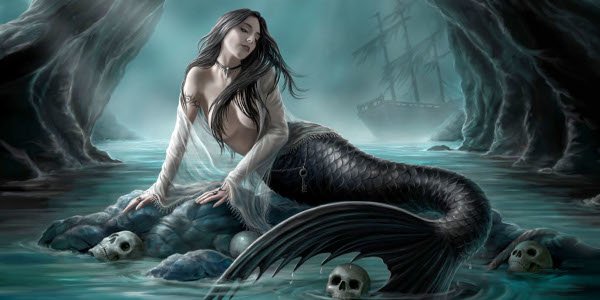 Siren is another legendary creature in Greek mythology who is half bird and half woman. Sirens were portrayed as femme fatales who lured sailors with their voices to shipwreck on the rocky coast of their island. Ovid wrote that the Sirens were human companions of Persephone.

After she was carried off by Hades, they sought her everywhere and prayed for wings to fly across the sea. In art, Sirens appeared first as birds with the head of women and later as women. The Siren is seen to have evolved from an ancient tale of the perils of exploration combined with an Asian image of a bird-woman. 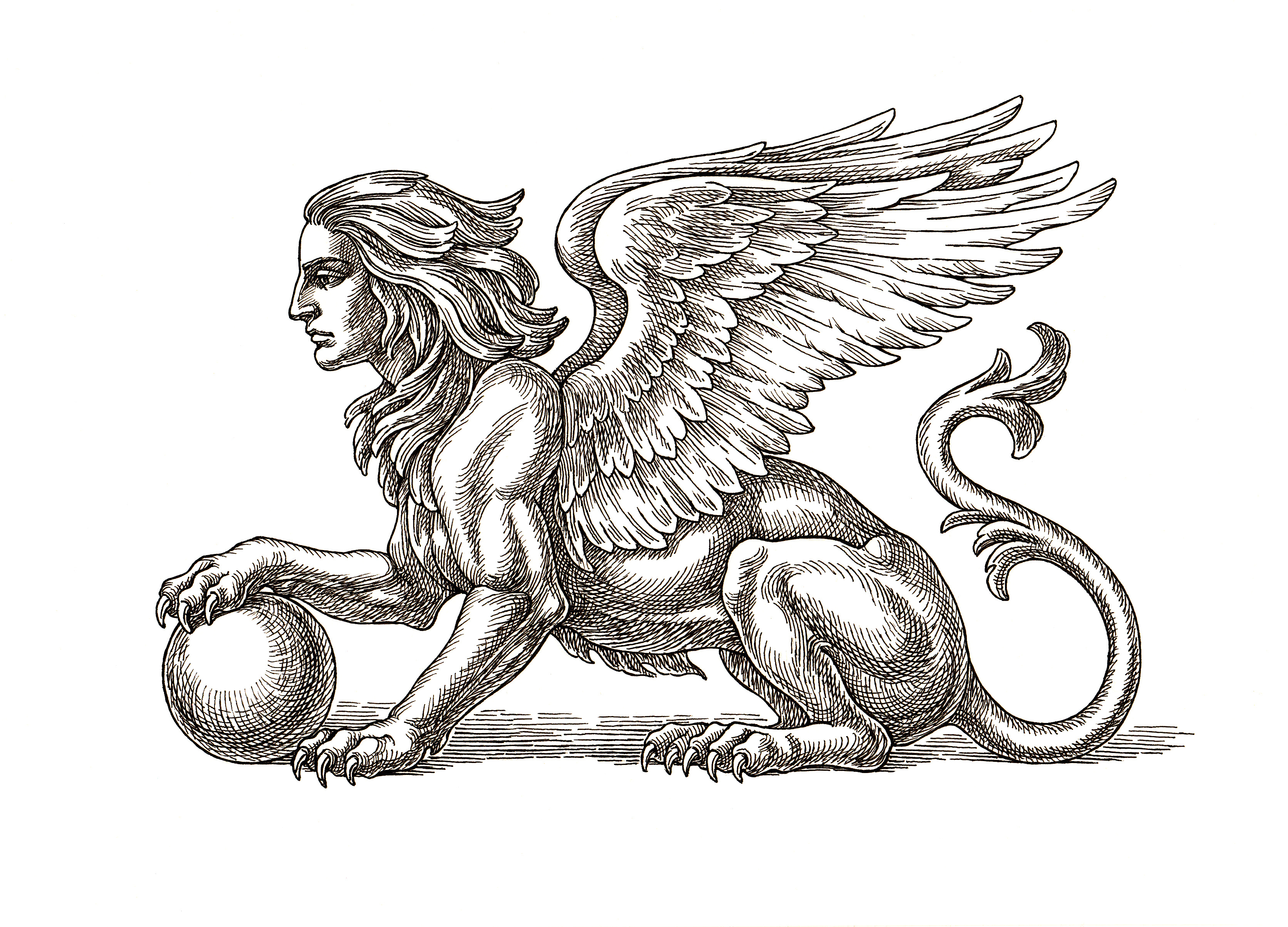 Sphinx is a mythological creature with a lion’s body and a human head. The word Sphinx was derived by Greek grammarians from the verb sphingein, but the etymology is not associated with the legend and is doubtful. In Greek mythology, Sphinx is a legendary creature, having the wings of an eagle and the tail of a serpent. Until the Greek Sphinx, which was a woman, the Egyptian Sphinx was shown as a man.

Furthermore, the Egyptian Sphinx enjoyed a revival during the Renaissance. Sphinx depictions are associated with architectural structures like royal tombs or religious temples. The largest Sphinx is the Great Sphinx of Giza, located on the Giza plateau and adjacent to the Great Pyramids of Giza on the bank of the Nile River. 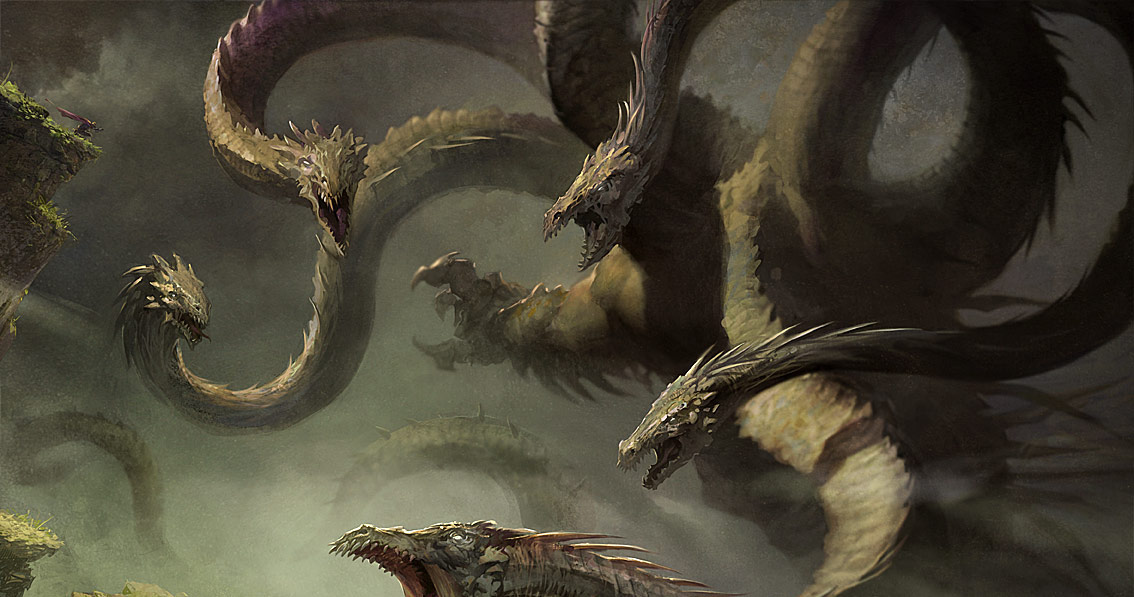 Hydra of Lerna is a serpentine water monster in Greek and Roman mythology. According to Hesiod, the Hydra was the offspring of  Echidna and Typhon. It had poisonous breath and blood that even its scent was deadly.

The oldest Hydra appears in Hesiod’s Theogony, while the oldest images of the monster are found on a pair of bronze fibulae dating to c.700 BC. The Hydra had several parallels in Eastern religions. In particular, Sumerian religion and Mesopotamian mythology celebrated the deeds of war and hunting god Ninurta. 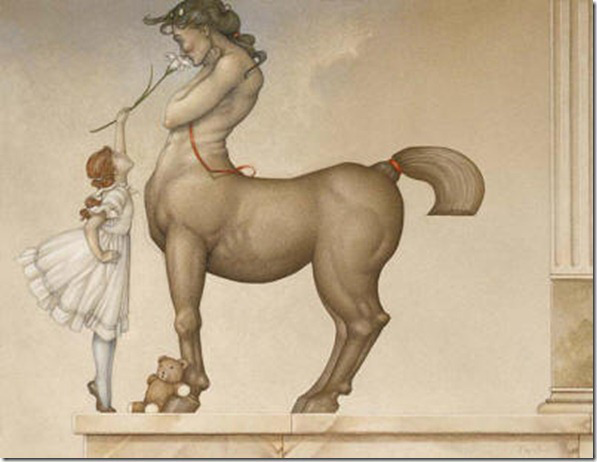 A centaur is a legendary creature from Greek mythology with the upper body of a human and the lower body and legs of a horse. They are thought in Greek myths as being wild as untamed horses and were said to inhabit the region of Magnesia and Mount Pelion in Thessaly. They remain a staple of modern fantasy literature. The centaurs were said to have been born of Ixion and Nephele.

Nephle was a cloud made into the likeness of Hera in a plot to trick Ixion into revealing his just for Hera to Zeus. Another tribe of Centaurs was said to have lived in Cyprus. The Centaurs are best known for their flight with the Lapiths. The Centaurs are better known to fight with Lapiths, who, according to myth, would have been cousins to the centaurs. 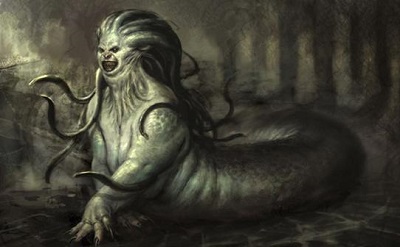 Echidna was a half-woman and half-snake who lived in a cave. She was the mother of many of the most famous monsters of Greek myth. Hesiod described “the fierce goddess Echidna” as a flesh-eating irresistible who was like neither mortal men nor the underlying gods. She’s also known for her romantic relationship with Typhon.

It is believed that she could produce a venom that would cause madness. Among Echidna’s progeny by the 100-headed Typhon was Ladon, another dragon who protected the Golden Flee. 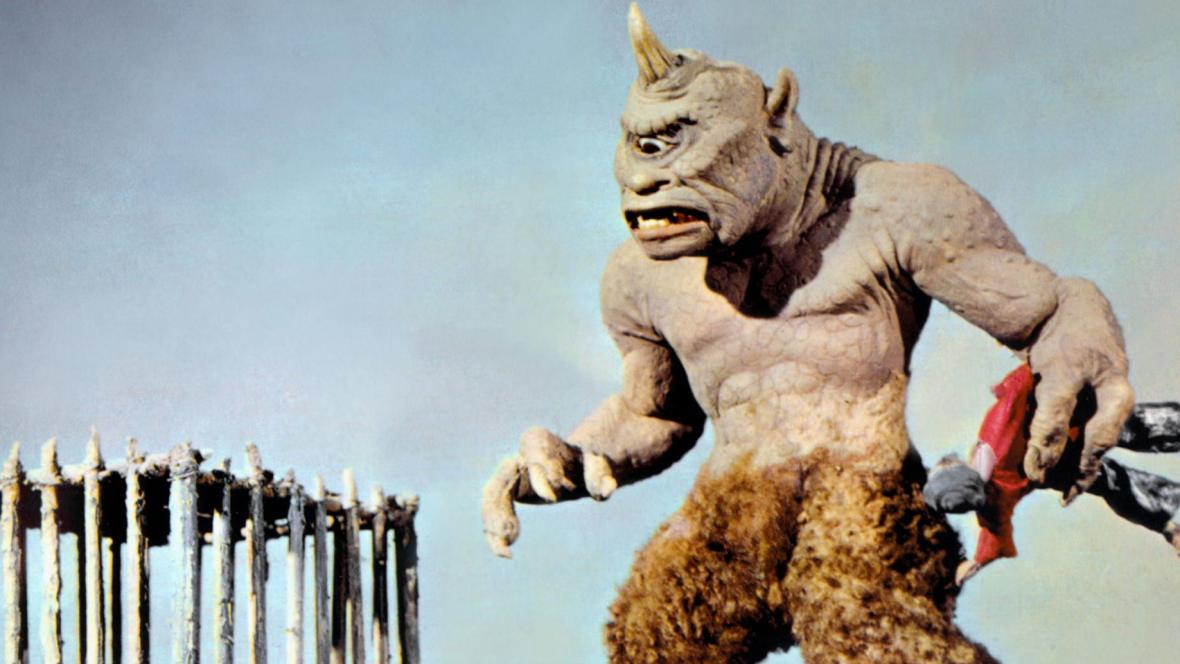 In Greek mythology, singular cyclops are giant one-eyed creatures. The 5th century BC playwright Euripides wrote a satyr play entitled Cyclops about Odysseus’ encounter with Polyphemus. From at least the 5th century BC, Cyclopes have been associated with the island of Sicily and the volcanic Aeolian Islands. Cyclopes were also said to have been the builders of the so-called Cyclopean walls of Mycenae, Tiryns, and Argos.

The late fifth and fourth century BC comic poet Nicophan wrote a play called Cheirogastores and Encheirogastores, which is thought to have been about the Cyclopean wall builders. Following the Cyclopes, Gaia gave birth to three more monstrous brothers. Uranus hated his monstrous children; he imprisoned them underground, deep inside Gaia. 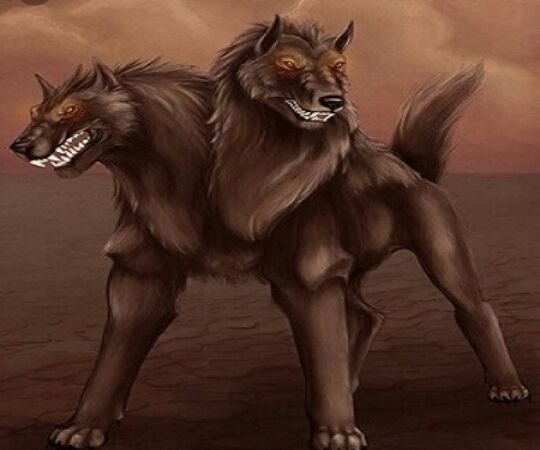 In Greek mythology, Orthrus was mythographer Apollodorus, a two-headed dog who guarded Geryon’s cattle and was killed by Heracles. He was the offspring of monsters Typhon and Echidna and the brother of Cerberus, who was also the multi-headed guard dog.

The earliest depiction of Orthrus is found on a late seventh-century bronze horse pectoral from Samos. It features two-headed Orthrus, with an arrow protruding from one of his heads and in front of Geryon. According to Apollodorus, Orthrus had two heads; however, in art, the number varies.

Do you know more about legendary creatures and their features? If yes, share about them below!