Cape buffalo, helicoprion, and others look terrifying and are considered the deadliest animals on the planet. Check out these prehistoric predators who were scary and preyed on small animals.

While some animals on the earth are known for their cuteness, others are dangerous and kill thousands of people. Also, several animals went extinct due to overharvesting, habitat loss, and changing wetlands.

There has been life on earth for about 4-5 billion years, and it was horrifying as hell. Life was dangerous because of prehistoric predators, which were bigger, terrifying, and less intelligent. The prehistoric mammals, which ranged from bears to Eurypterid, were known for their different features and preying on small animals.

Let us read about some prehistoric predators that threatened many lives on the planet. 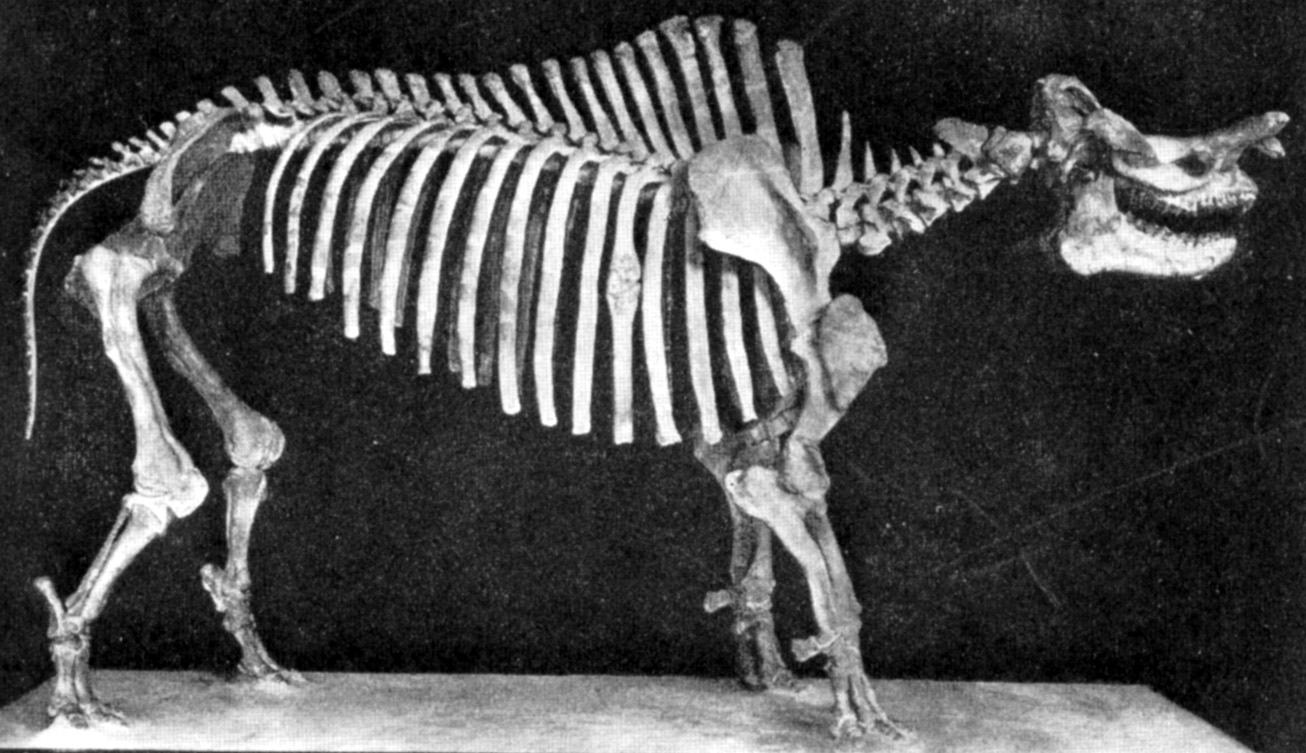 Megacerpos is the extinct genus of the prehistoric odd-toed ungulate family brontotheriidae. These species had a pair of blunt horns on their snout. The horns of males are larger than females. This indicates that they were social animals. They resembled rhinoceros but were larger than rhinoceros. The living Brontotherium is the third-largest animal on the land and stands around 8 ft 2 inches.

It was a herbivore. What makes this animal dangerous is its nasal horn and two-to-three-ton heft. It impressed paleontologists and was named four times. This mammal was prey to smaller Andrewsarchus. Why this prehistoric predator went extinct is unknown by paleontologists. It was a large rhino-like mammal that lived nearly 33 million years ago during the Late Eocene Period. 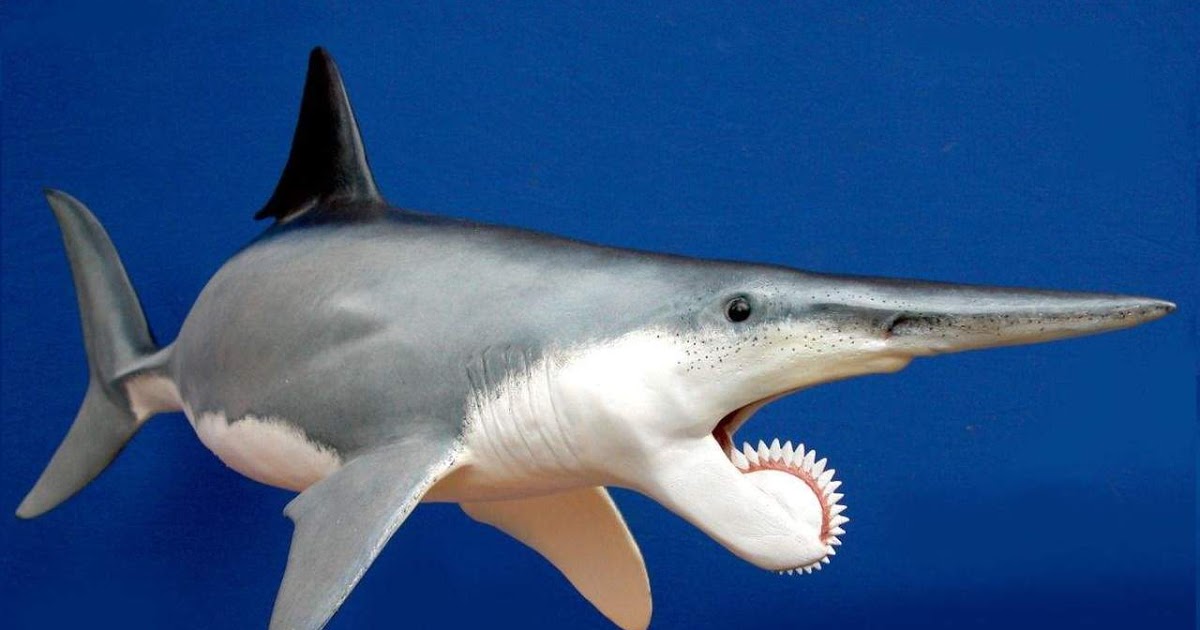 Helicoprion is the extinct genus of shark-like eugeneodont fish. Fossils of Helicoprion have been found worldwide, and the genus is known from China, Canada, Norway, and other places. Like other chondrichthyan fish, Helicoprions had skeletons made of cartilage. Helicoprion specimens are known from tooth whorls, which comprise dozens of enameled covered teeth. The lower part of teeth form projections and below the crown of the previous tooth.

They had an Autodiastylic jaw suspension, which means that the inner edge of palatoquadrate was attached to chondrocranium at different points. The attachment points are the dome-shaped ethmoid process and at the front of the palatoquadrate. Helicoprion is believed to have been over 25 feet long and of nearly 1000 pounds.

It managed to survive the Permian-Triassic Extinction Event - it was an event that killed around 90% of marine animals and nearly 70% of land animals. The only remains of this prehistoric animal until 2013 were a fossilized whorl of teeth. The whorl of teeth was formed as they grew outwards while creating a spiral as it aged. 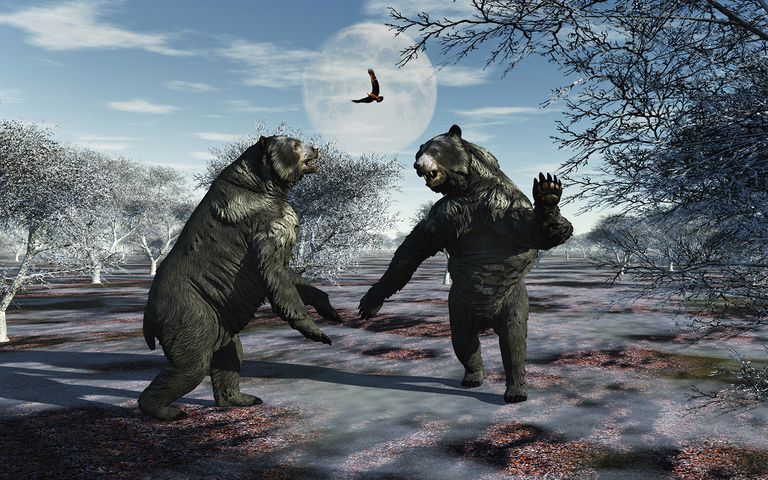 The short-faced bear is the extinct bear genus that inhabited the North American Pleistocene (a geological epoch that lasted from about 2580,000 to 11700 years ago). There are two recognized species of bear - the lesser short-faced bear and the giant short-faced bear (Arctodus simus).

This prehistoric predator was known in circles because it was the complete skeleton of a giant short-faced bear found in America. They weighed up to 13 feet long and lived in the mountains and woodlands of North America. They were carnivores and supplemented their diet with plants. They have large-sized long legs, a blunt face, and a snout. However, some studies suggest that Arctodus Simus was omnivore like bears living today. 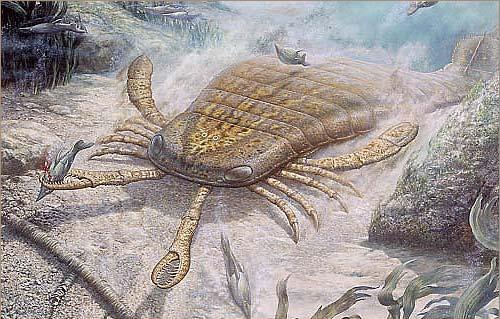 Another prehistoric predator which belongs to a group of extinct aquatic arthropods is Jaekelopterus. This 8-foot long arthropod lived in the water and had claws. They look similar to the face-huggers and from the Alien movie franchise. They had segmented bodies and with limbs and spikes. They had loaded claws to catch fishes as they passed by.

Jaekelopterus looked similar to pterygotid and possessed a largely expanded telson with enlarged pincers and forelimbs. The species of this prehistoric predator were first described as species of the related Pterygotus. It is the largest known eurypterid and arthropod to ever exist. The body construction of Jaekelopterus suggests that they were adapted to the aquatic lifestyle. An active Jaekelopterus was highly agile and possessed maneuverability. 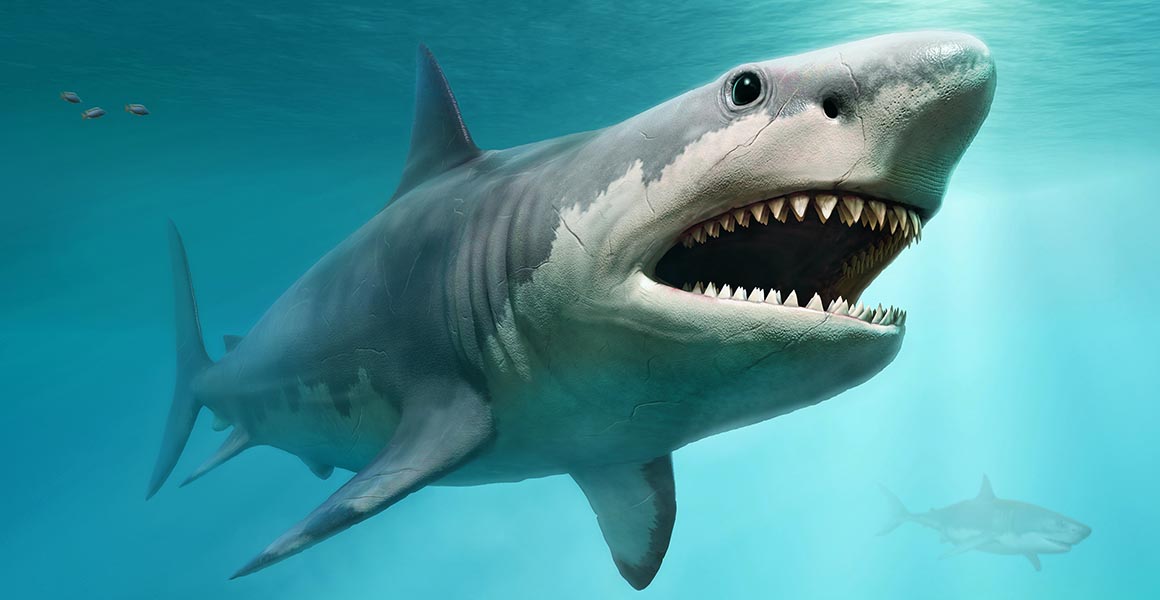 This long shark lived and hunted in the waters as Livyatan melvillei. It is an extinct species of shark that lived nearly 3.5 million years ago. Earlier, it was thought to be a member of the family Lamnidae and a relative of the great white shark. But now, it is classified into the extinct family Otodontidae. Megalodon is considered to be the largest shark and largest fish to be lived. It is known from fragmentary remains, and its maximum size is uncertain.

The fossil record indicates that it targeted large prey, like whales and sea turtles. Unlike a great whale, it attacks prey from the soft underside and uses its jaws to puncture the heart and lungs of its prey. The teeth are the most common fossil of Megalodon. Its characteristics include robust structure, large size, a lack of lateral denticles.

The lingual side of the tooth and the part facing the convex were convex. The anterior teeth were almost perpendicular to the jaw and symmetrical, whereas the posterior were asymmetrical. Its teeth could measure 7.1 in slant height and are the largest of any shark species. Fossil remains of this prehistoric predator have been found in tropical and temperate seas along the coastlines and shelf regions of continents except for Antarctica. The data suggest that adult megalodon had a length of around 18 meters. 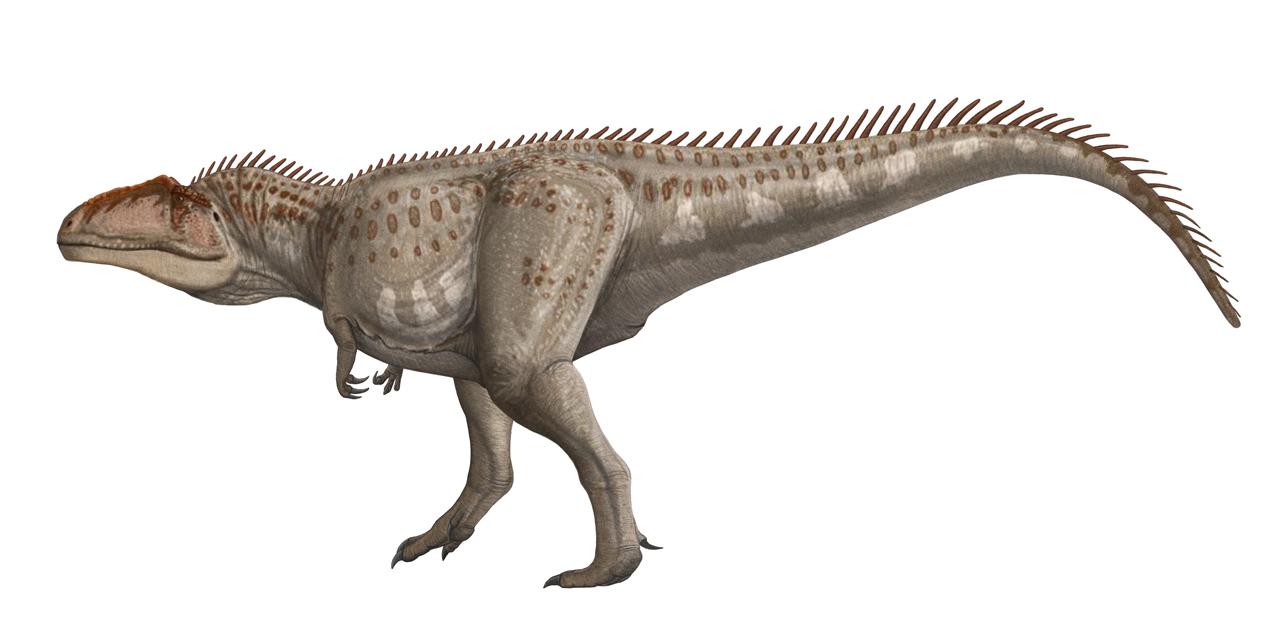 This prehistoric predator was 43 feet long and larger than the size of Tyrannosaurus rex. It was one of the largest known terrestrial carnivores. The exact size of this prehistoric animal was uncertain due to the incompleteness of the details. Different sizes were estimated by the researchers. Length of the holotype specimen (approximately) varied between 12 and 13 m.

It had a skull of up to 1.80m long. The skull roof was broad and formed a shell that overhung the short supratemporal fenestra at the top rear of the skull. The dentary of the jaw expanded in height towards the front, where it was flattened. The curvature of the dentary shows that the mouth of this giant creature would have been wide. The teeth of the dentary were of similar shapes and sizes. Evidence suggests that this wild creature was a hunter and hunted large sauropods. 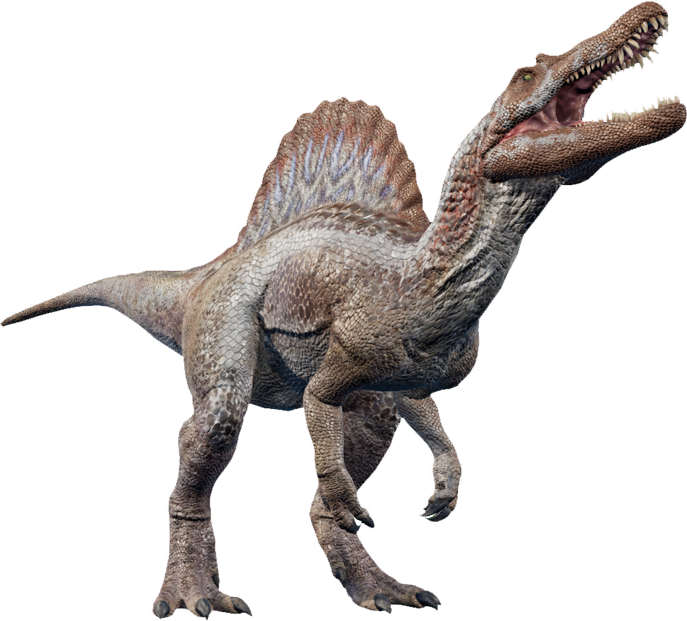 It is one of the deadliest creatures ever captured on the earth. It had a long skull-like crocodile and a snout filled with 64 conical teeth.

According to the evidence found, this creature was semi-aquatic. Currently, it is the largest known carnivorous dinosaur and is larger than Giganotosaurus. The exact size of this animal is not known; it is believed that they might be 40-50 feet in height and weighed about 20 tons. It had neutral spines that ran along its back, creating a sail structure that made it look longer and dangerous.

It is a genus of spinosaurid dinosaur that lived in North Africa during the Cenomanian to upper Turonian stages of the Late Cretaceous period. This creature was known first from Egyptian remains discovered in 1912. The original remains were destroyed in WWII. It was the largest known carnivorous dinosaur and even larger than theropods. It is believed that this prehistoric predator ate fish and hunted terrestrial and aquatic prey.

Also, it was semiaquatic and lived on land and in water. Six partial specimens of Spinosaurus have been described. Its skull had a narrow snout filled with conical teeth that lacked serrations. It also had six or seven teeth. The second and third teeth on each side were larger than the rest of the teeth in the premaxilla. The tip of the snout holding those teeth was expanded. Here are popular long neck dinosaurs ever recorded in history. 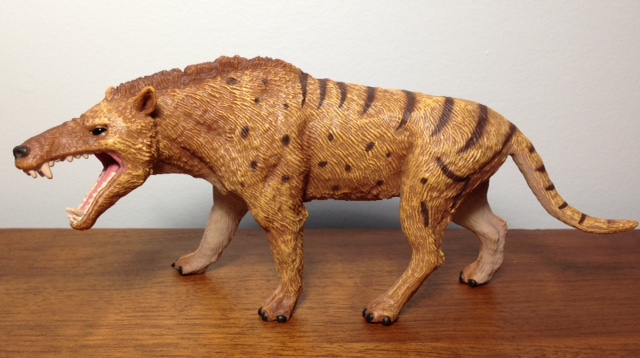 It is an extinct genus of mammals that lived during the middle Eocene epoch in Mongolia, China. The only known skull was found in the lower levels of the middle Irdin Manha Formation of Inner Mongolia.

Measuring 13 feet from snout to tail and weighing a ton, this was the largest terrestrial meat-eating mammal to be lived. Its skull was known to be 2 feet long and studded with sharp teeth. This predator was not ancestral to modern predators like tigers or hyenas but belonged to the family as camels and antelopes. 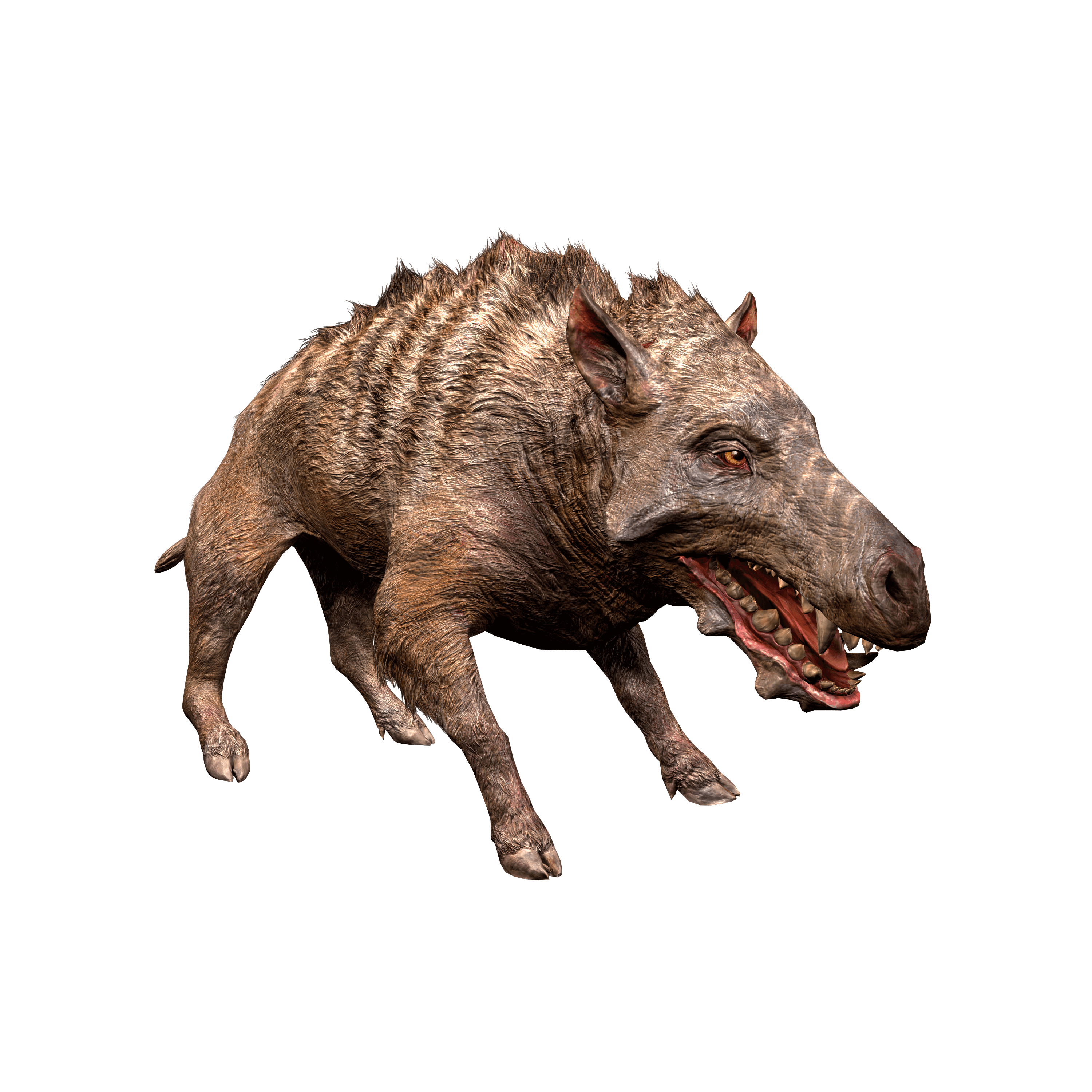 It is an extinct genus of entelodont artiodactyl endemic to Eurasia. It was a large ancestor of hoofed animals and could grow up to 3 meters tall and weighed up to 1 tonne. This creature is described as a pig from hell and was aggressive and could fight with predators. Like its fellow animals, this half-ton animal also possesses a small brain, making it more inclined to its prey. 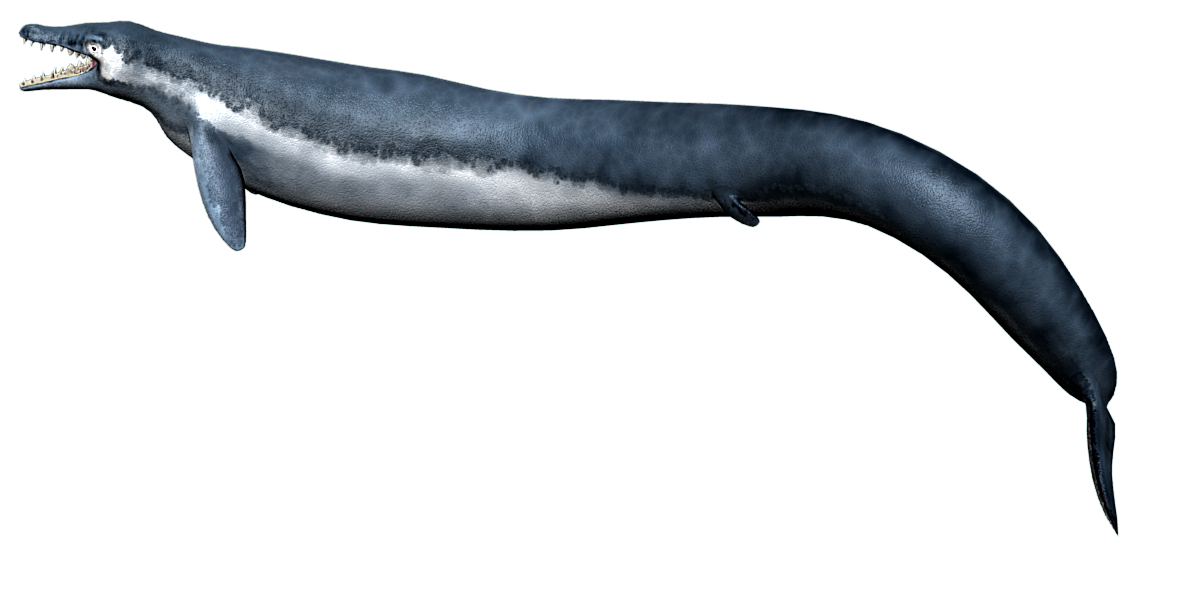 Basilosaurus is the genus of the predatory and prehistoric archaeocete whale from the late Eocene. It is considered to have been common in the Tethys sea. It was the predator of its environment and consumed large fish and other marine mammals.

It measured 15-20 m and is one of the largest known animals to exist between the K–Pg extinction event 66 million years ago. It is different from other basilosaurids by body size and elongated posterior thoracic. It does not have the vertically oriented metapophysis seen in its relative basilosauridae known as Basiloterus. Here are other dangerous predators of the sea.