10 Dogs You Won’t Believe are Employed & are Doing a Great Job!

Here are the dogs that are employed and do their work seriously. You will be impressed by how these dogs work and earn bread for themselves. 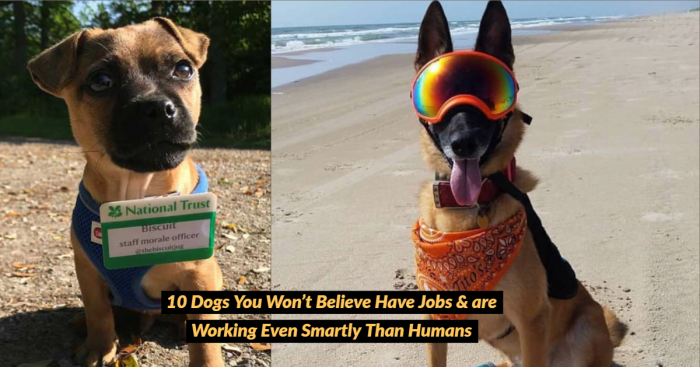 Dogs are humans’ best friends. They are loyal, hard-working, and adore their owners very much. When it comes to emotions and habits, several animals behave like humans like monkeys, dogs, and horses. It is interesting to see how some animals take time to cook their meal and even practice cooking techniques that resemble humans.

Have you ever wondered what dogs and humans have in common? They both are talented, can play video games, cuddle, and are full of energy. But do you know with a little training, these four-legged animals can learn several tasks that humans do? They have a superior sense of smell and help in locating bombs and drugs. They are a good caretaker too.

If you want to own a pet but too lazy to feed them, here are low-maintenance breeds that even don't need vet visits. You can also own lazy dogs who only love curling up on the couch.

What do you think- when dogs can do what humans are doing, why should not we employ them? I think it is a great thought. Even some people have hired them. Robots have already transformed into humans, and now, dogs are doing the same. Don’t believe this? Take a look at dogs who are employed and doing their job perfectly.

You won’t believe but Tucker, a Pacific Northwest dog, is famous for its potential to find Orca scat from the prow of a boat. Born in 2004 and adopted by Conservation Canines in 2006, is a black Labrador retriever mix.

Researchers who collect waste can keep track of individuals in pods by DNA and get information about the whale’s diet. This helps the researchers in knowing, from where and what they have eaten that is affecting local pods.

2. This Dog is Trained to Dig up Sea Turtle Nests 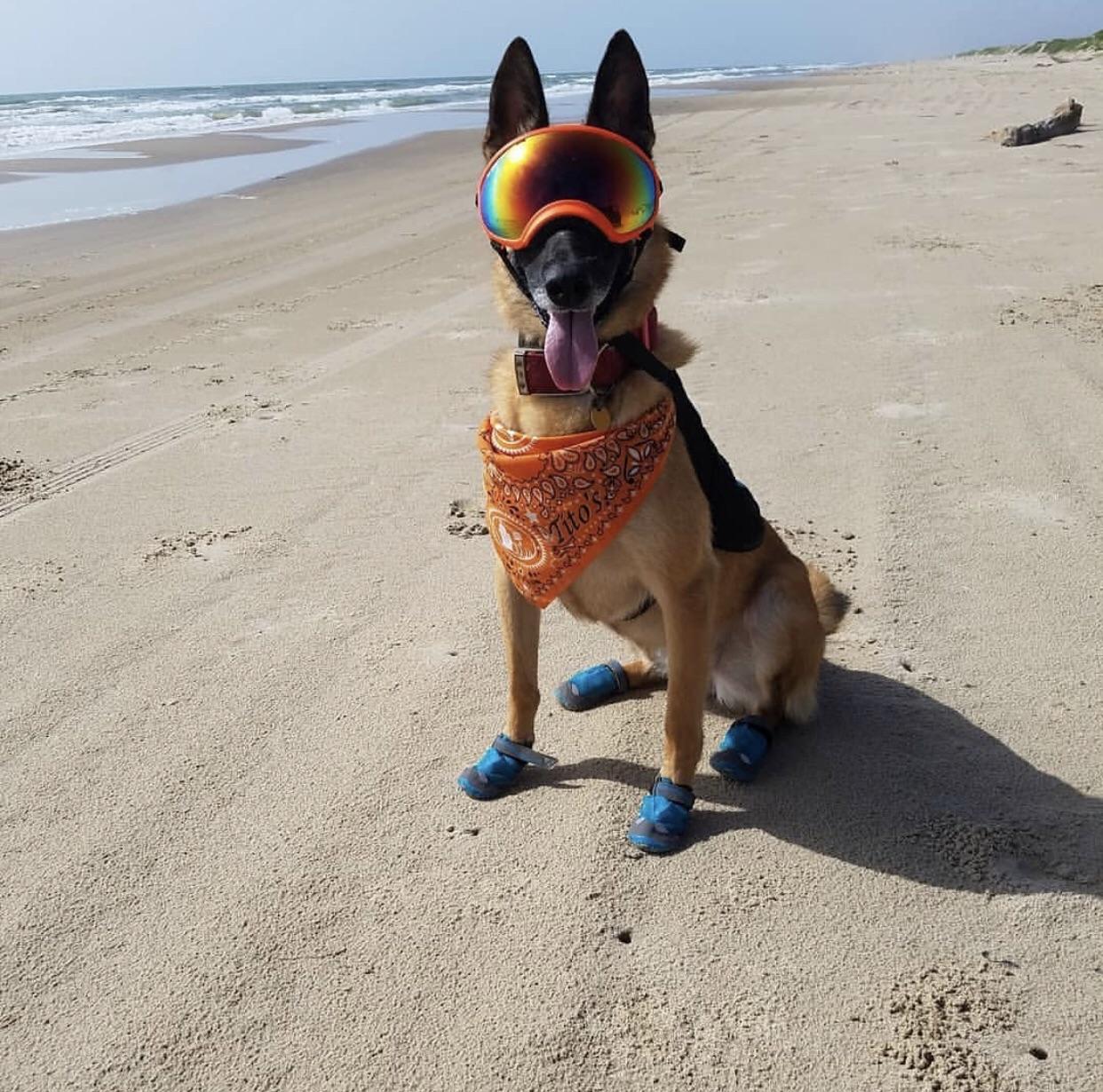 Wow! This dog is so cool.

He is trained to dig up a sea turtle nests so that they can be incubated properly and set free after hatching. 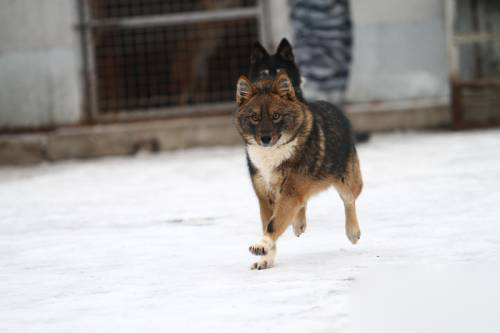 The Jackal dog hybrid Sulimov is specifically trained to work as sniffer dogs in airports for Russian airline Aeroflot. These dogs have Jackal genes but have the size and trainability like their ancestors.

The Sulimov dog or Shalaika is a hybrid between two Turkmen golden jackals and Lapponian Herders. The original cross-breeding began in the 1970s, but the Sulimov dogs are getting training from 2001 to detect several explosive ingredients which both humans and technology can’t detect.

Can you ever imagine a dog running a store? No! But this Shiba-Inu dog named Ken-Kun is the owner of a potato kiosk in Japan. A dog stands behind the counters and receives the payments from customers. A sign outside his shop reads-

Customers choose the potato and deposit the money in the box. I have never seen dog earning money for his survival and not depending on the owner.

I am impressed by this dog. Are you?

Do you know that Japan has a resort that offers a pool filled with wine? Check out more unique and interesting things you can do in Japan.

5. Jax is the Stamp Licker at the Post Office 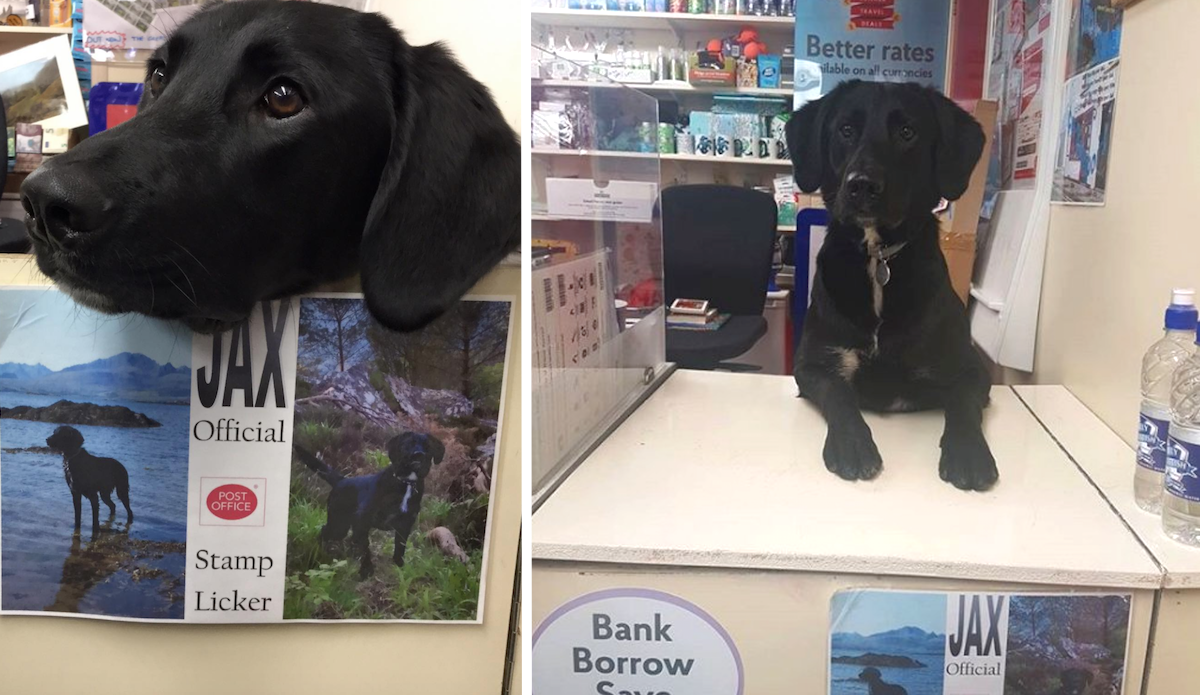 While most of us struggle to get a decent job, this dog is a stamp licker at the post office. For the last two-three years, Ray Chandler has been in charge of the post office. Each day he goes to work with him and takes his place behind Chandler’s counter.

After some days, Jax became the official stamp licker at the post office. After getting hired, he has become the favorite of locals. Some only visit the post office to meet him and also bring some cookies for him.

6. A Dog that Helps You in Taking Your Items to the Counter 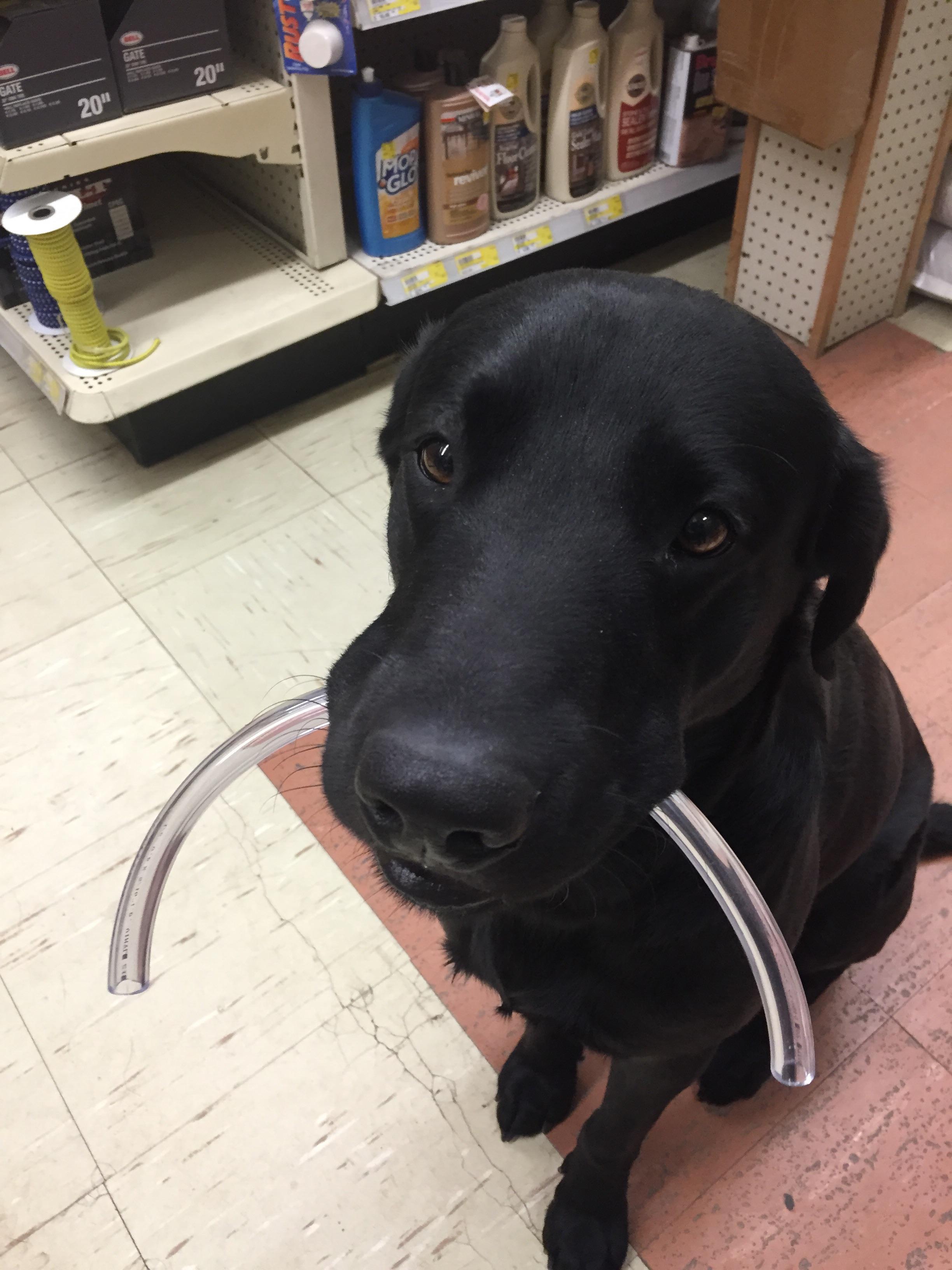 Now, this is something amazing. A local hardware store has a dog that takes your items to the counter.

What do you think – is this the trick of the shop owner to attract the customers? Whatever the reason may be, I find this dog cute.

7. Meet this Cute Dog Who Comforts People Who Have Lost Loved Ones 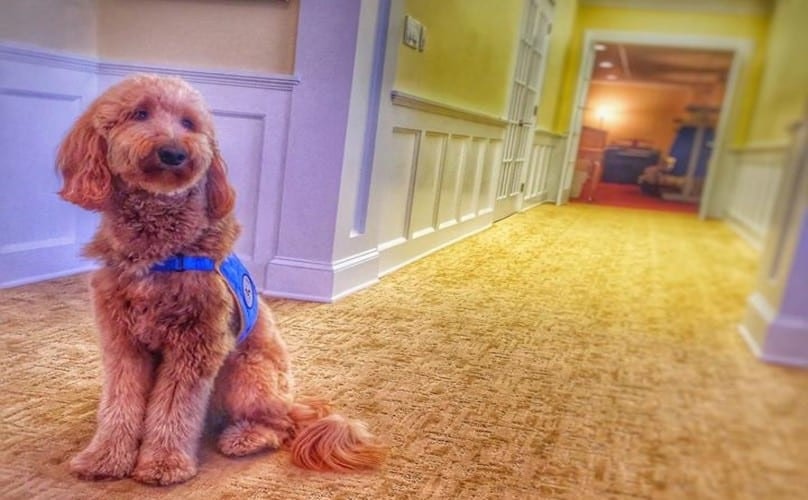 I think this young mini doodle is doing a great job. This cute little pup works for funeral home and comforts people who have lost loved ones. Even though they can’t forget them, giving comfort for a while is a way to ease that grief.

8. Meet Rusty! A Dog that Cheers the Patients to Recover Soon Dogs are adorable. Spending time with them makes you forget your sorrows. Rusty is a volunteer in a St. Boniface hospital who cheers up the patients for their faster recovery. He is so loved by the public that hospital authorities have commissioned a painting to show respect for his work.

9. The Cutest Receptionist You Will See Today! 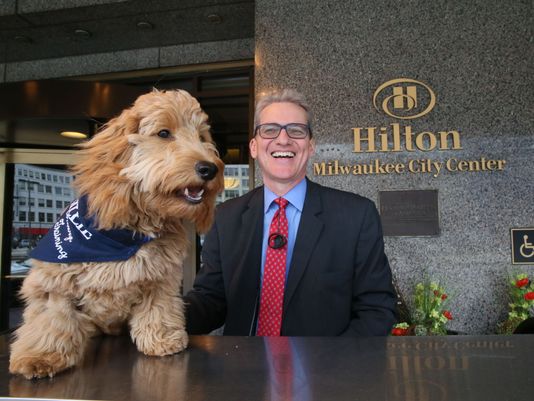 Assisting guests by making restaurant reservations, booking tours is a tough job. Great communication skills and personality are all that you need to become a good concierge.

But this dog concierge is so cute that everyone visits the hotel only to talk to him. Have you ever seen this much cute receptionist at any hotel?

10. Airport Dog Who Scares Away All the Birds From the Runway

Another bittersweet goodbye recently for Pipe and I. We've already recognized AMT2 Cass Ontiveros in a previous #warriorwednesday post, but this time it's to say bye bye. Cass received orders for a transfer to Air Station Corpus Christi, which is awesome, since he'll be close to family. I love this pic. Just a quick snapshot of two buds and it turned into something wall worthy. I can't stress enough how many amazing people Piper and I have met along the way, which is why these images are so special. Good luck Cass and thank you for your service! ???? ------- Eye Pro: @rexspecsk9 Vest: @k9storminc (Donated by @spikesk9fund) Aircraft: @uscg #airstatvc ???????????? # #airportk9 #airport #k9 #k9team #k9storm #rexspecsk9 #spikesk9fund #aviation #helicopter #uscg #coastguard #military #bordercollie #dog #dogsoffreedom #dogsofinstagram #workingdog #traversecity #puremichigan

He is so intelligent. This dog shoos away the birds that might come into contact with airplane and cause accident.

I don’t think there could be a better companion than a dog. They are talented and always dedicated to their work. Right from herding sheep to providing physical therapy, there is not a single thing a dog can’t do. So, take inspiration from these dogs and do your work sincerely.

Do you know anyone who employed a dog? What kind of work does he do? Drop your comments below.