Have you ever heard about whale helping a human? Yes, you heard it right. A couple of days ago, a woman dropped her phone in the ocean. Soon after, she noticed a beluga brought that phone & returned it to her. Watch the video here! 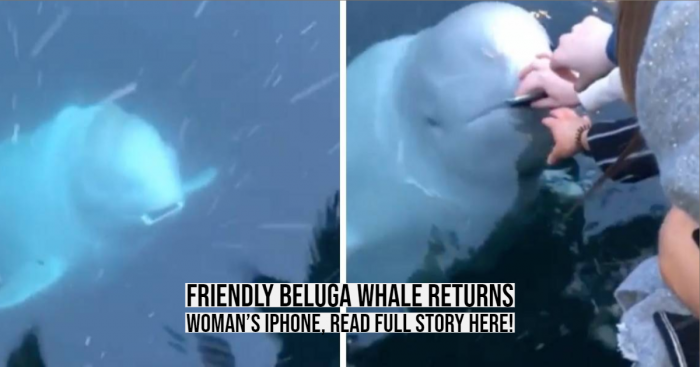 Not even a month has passed since one Beluga whale, one of the most intelligent animals, made the headlines. And once again, the same whale came in headlines again by helping a lady by returning her phone.

Yes, you heard right! The wayward mammal which was first believed to be ‘Russian Spy’ or from the military is now turned out as a kind soul who is also helpful to the travelers.

Why the Whale is Known as ‘Russian Spy’? 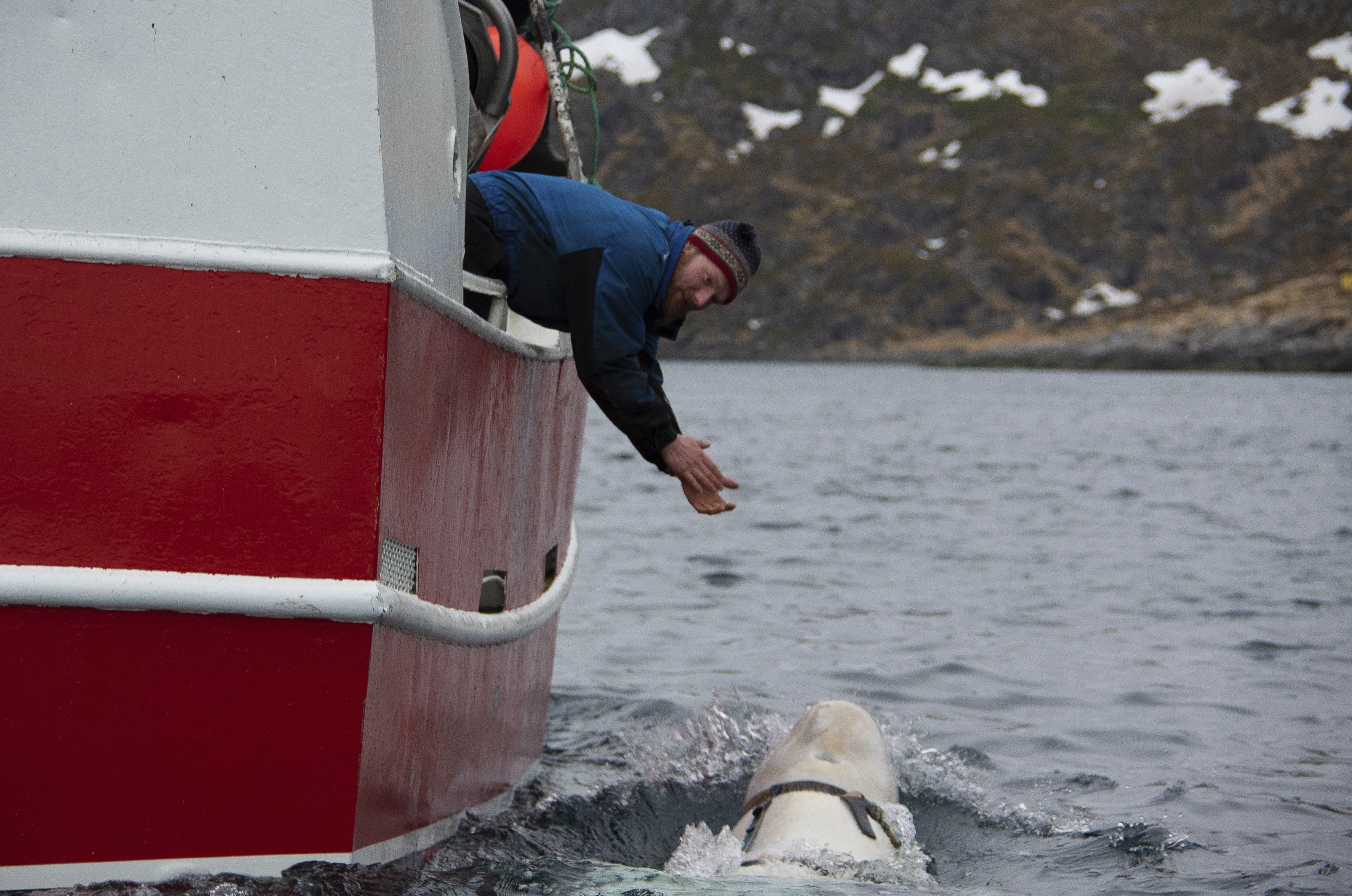 A couple of days ago, a beluga whale found with a tight harness raised the alarm for Norwegian officials. As the harness appeared to be Russian, it prompted speculation that the animal may have escaped from the  Russian military facility.

According to one official Joergen Ree Wiig from the Norwegian Directorate of Fisheries and government agency, the harness strap has few words return upon it-

According to him, a few days before the incident, one fisherman in Arctic Norway reported about the tame white cetacean with a tight harness swimming around. Therefore, with the assistance of Ree Wiig, fisherman Joar Hesten jumped into the frigid water and took the harness out.

Further, a professor at the Department of Arctic and Marine Biology at the Arctic University of Norway in Tromsø, northern Norway, Audun Rikardsen, stated “it is most likely that Russian Navy in Murmansk” is involved.

As in the far northwest of Russia, Russia has major military facilities in and around Murmansk City in Russia, especially on the Kola Peninsula.

However, later Rikardsen had checked with scholars in Norway and Russia and said they had not reported any program or experiments using beluga whales.

“This is a tame animal that is used to get food served so that is why it has made contacts with the fishermen.”

“The question is now whether it can survive by finding food by itself. We have seen cases where other whales that have been in Russian captivity doing fine.”

To Norwegian broadcaster NRK, Hesten said that the whale began to rub itself against his boat when he first spotted it. 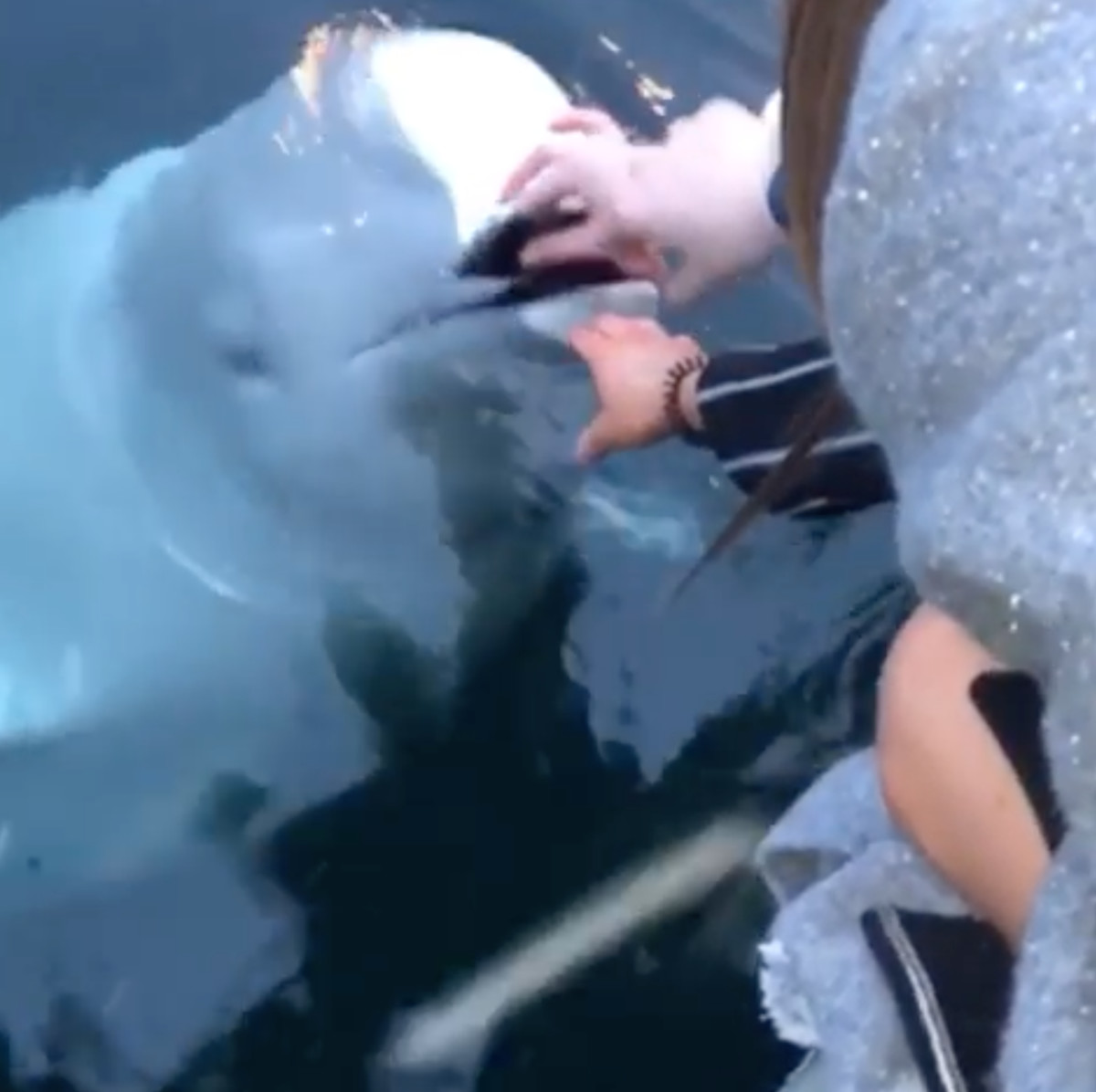 A few days ago, a young woman was out on the water in the boat, and she met an accident. To see if they could spot the alleged former spy whale, she and her friends headed to Hammerfest.

And, finally, they all managed to see the beluga, one of the most notable whale species. But unfortunately, her phone dropped out of her pocket into the blue depths of the ocean.

Well, soon after that, the beluga whale returned to the surface with her phone in its mouth and also returned the device to its owner in a well-mannered way.

In an interview with ‘the dodo,’ she said,

“We laid down on the dock to look at it and hopefully get the chance to pat it. I had forgotten to close my jacket pocket and my phone fell in the ocean.
We assumed it would be gone forever, until the whale dove back down and came back a few moments later with my phone in its mouth!
Everyone was so surprised. We almost didn’t believe what we saw. I was super happy and thankful that I got my phone back”

During the whole incident, one of her friends caught everything on camera. And, when they posted the video on social media, the beluga whale quickly became a viral sensation on social media with many people left in awe of its intelligence.

Unfortunately, water damage had made the phone inoperable by that point but, surely she’ll have evidence when she will tell the geniuses at the Apple store about what happened.

What was the People’s Reaction? 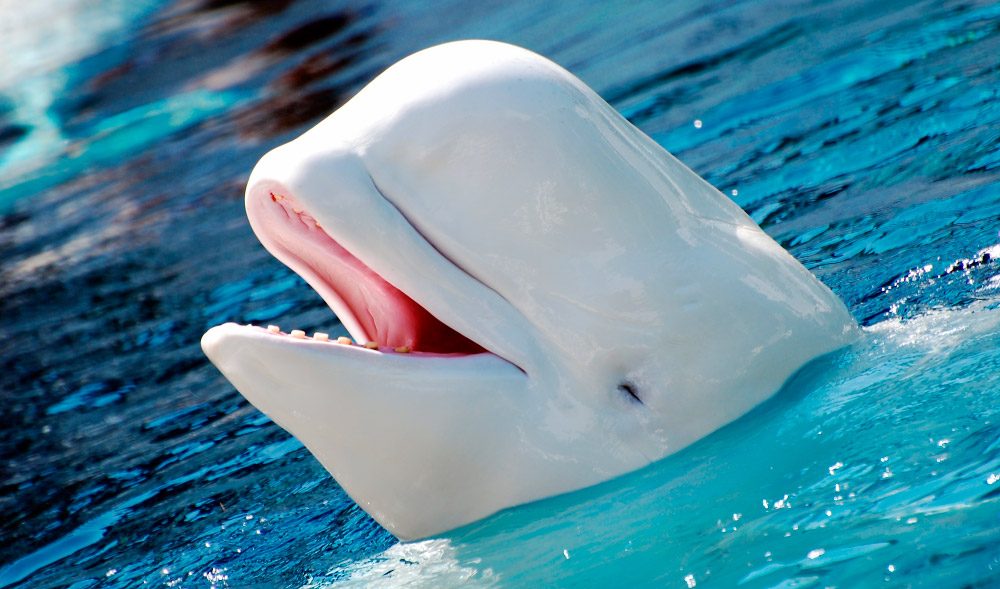 When the video hit the internet, many people started praising the mammal.

One of the social media users shared the video with the caption,

“Incredible. The Russian trained Beluga whale is still around Hammerfest Norway
He picked up a woman’s cell phone after she dropped it in the water and gave it back to her ❤️

He picked up a woman’s cell phone after she dropped it in the water and gave it back to her ??
???? isa.opdahl pic.twitter.com/55QXfuuCQf

Another user shared the video with the caption,

In response to such tweets, many people praised the mammal.

“Is it just me or does it seem the animals are starting to show more humanity than humans.  Asking for a friend...my golden retriever.”

Is it just me or does it seem the animals are starting to show more humanity than humans. Asking for a friend...my golden retriever.

In another reply, a user Pamela wrote,

“Love mammals and animals. They are so much more intelligent than we think.”

Love mammals and animals. They are so much more intelligent than we think.

One other user Ben wrote,

“Even the whales are doing their bit to stop littering!!”

Even the whales are doing their bit to stop littering!!

“If man evolved from apes what did dolphins evolve from? Smartest animals on the planet ❤️ #godscreation”

If man evolved from apes what did dolphins evolve from? Smartest animals on the planet ?? #godscreation

“Wtf I wanna cry that whale is so cute and sweet”

Wtf I wanna cry that whale is so cute and sweet

One other user Dale Mccouaig wrote,

“What a good wee whale”

What a good wee whale

Yet another user Pax wrote,

“Good whale.  But I do hope they are feeding her she may not know how to hunt.

Good whale. But I do hope they are feeding her she may not know how to hunt.????

Well, the friendly whale continues to hover around the Hammerfest area for the time being.

10 Dogs You Won’t Believe are Employed & are Doing a Great Job!